It Wasn’t Raining When Noah Built The Ark! 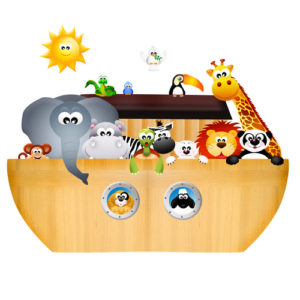 “Oh my gosh”, my wife Jo exclaimed. “He’s walking right toward us!” He smiled, extended his hand and said, “Hi, I’m Ron Paul.” I smiled, shook his hand, and introduced myself and my wife.

I was the oddball when I wrote for Casey Research. I was surrounded by legendary newsletter pundits and heavy-duty researchers. I was a 73-year-old retiree, writing for the middle class who had their retirement dreams derailed by the Federal Reserve.

We were at a “meet & greet” event at a Casey Summit. Exclusive Casey Club members could mingle with the investment legends and speakers. I was just getting started in my encore career.

Dr. Paul asked, “What do you do for Casey Research?” I explained that I was the newbie, writing about retirement for the average middle-class baby boomer. I didn’t mince words; the Federal Reserve’s Zero Interest Rate Policy had destroyed the retirement hopes and dreams of an entire generation. I’m a member of a ROMEO (Retired Old Men Eating Out) club and most of our members were terrified. They played by the rules, worked hard, saved and invested their money, and now their retirement income is falling woefully short of their projections.

We connected quickly; Dr. Paul completely understood. He explained many of the causes behind the government’s actions, which he opposed, and believes our country needs a financial overhaul, including elimination of the Federal Reserve. It was not a superficial conversation.

I felt guilty talking so long, the Casey Group had many customers paying big bucks to rub elbows with this legend. I politely decided I needed to find the restroom.

Dr. Paul gave a terrific keynote address. He said things are worse than the government would admit. Our fiat money system is totally out of control and would eventually collapse. He felt we were in the middle of a revolution, yet he was positive that things would eventually get fixed.

How ironic it is when I came across his recent (17 page) article, “The Dollar Dilemma: Where to From Here?” outlining much of what we talked about in our untimely meeting 5 years ago.

My research time was well spent. Dr. Paul tells about choices the government made and Mike’s videos, with charts, graphs, and understandable explanations show us the consequences of those choices.

The major difference is Dr. Paul focuses heavily on the political side of what is causing our problems, where Mike focuses, in great detail, about investment implications – warning investors about what lies ahead.

Mike warned investors about the 2008 real estate bubble. Those who listened to him and got out avoided some catastrophic losses. Mike says:

“If you are going to help anybody you have to do it before the crisis, not after the crisis. To be early you’ve got to be willing to be wrong for a period of time, and perhaps even scoffed at by some.”

For a decade now, I too have warned that the Fed’s reckless money printing will eventually cause out of control inflation and a lot of social unrest. It hasn’t happened – yet! Today I’m even more convinced that a terrible collapse is in the cards. The government’s frantic effort to mask the truth is doomed to fail.

I’ll confess to wondering if Noah was ridiculed when he built the ark? Answer in Genesis reports:

“…. We simply don’t know because the Bible does not tell us. …. God’s Word doesn’t say anything about people mocking Noah and his family.”

Why am I now more confident than ever a crash is coming?

Dr. Paul starts at the top:

“It’s a fallacy to believe the US has a free market economy. The economy is run by a conglomerate of individuals and special interests, in and out of government, including the Deep State ….

…. Middle-class America is not of much concern to the money managers. What occupies their minds is how to protect Wall Street from any financial crisis that might arise. The monetary elite are alert as to who will be blamed, and the Fed, in particular, must be protected.

…. There’s good reason the financial elite hysterically oppose an audit of the Fed.

The increase in prosperity has been limited to the already wealthy. It is true that the rich are getting richer and the middle class is being wiped out. (Emphasis mine) …. The seriousness of the problem, …. explains the anger and frustration the people feel.”

The Federal Reserve creates trillions of dollars out of thin air to allow the political class to spend at will. It’s all about retaining political power.

Mike’s in-depth update on the “Everything Bubble” is an eye-opener. Historically an investor had choices; you could exit a bubble and reinvest in another safe, undervalued asset class. If you felt the stocks were overvalued, you could move to bonds or real estate for example.

Today, the Fed has created so much money, stocks, bonds, real estate, currency, and debt are all in a bubble. He graphically shows us how one market collapse could trigger a domino effect; particularly when the world loses confidence in the US dollar.

Think the S&P 500 is due for a correction? Note the grey recession lines are way over to the left of the graph.

The Fed is raising interest rates causing the value of trillions of dollars in bonds to decline. Student and auto loan debt is skyrocketing – look for defaults to continue to rise. I’ve recently written about the Russians selling off their treasuries, and how both China and Russia are stockpiling gold.

Over 1/3 of Dr. Paul’s article makes a terrific case for owning gold. In 1981 president Carter established a 17-member Gold Commission – Dr. Paul was a member. While he believes the government is behind gold price manipulation, he tells us:

“Control over money has been cherished, for thousands of years by all forms of governments, in collusion with bankers. This partnership has been destructive to the middle class while enriching the well off. The unfairness of a fiat monetary system frequently has led to dangerous social and political upheavals.

…. The world now …. is once again considering official use of gold in the monetary system. A growing consensus agrees that a world-wide monetary crisis is fast approaching and once again the importance of gold as money is being discussed. (Emphasis mine) Those who benefit from the fiat dollar standard are not pleased with this renewed interest in gold ….

The principle of gold as money has been acknowledged for thousands of years and is not going to be ignored any time soon.” (Emphasis mine)

I had mixed emotions when he shared some private discussions with Former Fed Chairman Alan Greenspan:

“This is what he had to say about gold in 1966: “…gold and economic freedom are inseparable …government deficit spending under a gold standard is severely limited.” And more: “The abandonment of the gold standard made it possible for the welfare statists to use the banking system as a means to an unlimited expansion of credit” (by the Federal Reserve).

He closed his article with a couple truisms: “In the absence of the gold standard, there is no way to protect savings from confiscation through inflation. There is no store of value…Deficit spending is simply a scheme for the confiscation of wealth. Gold stands in the way of this insidious process.” (Emphasis mine)

In private, I asked Greenspan about this article and surprisingly he said that he had just recently reread it and still totally agreed with it.”

Part of my renewed confidence in the inevitable crash was reinforced with this remark:

“It didn’t happen overnight, but in the past 100 years, we have inexorably marched toward the disaster which we now face. The climactic end to the fiat dollar standard is now on the horizon.”

(Mike Maloney and Dr. Paul also discussed cryptocurrencies – something I am not writing about at this time.)

Build your ark now – before the rain starts!

I’m not selling my gold or any investments diversified in alternative currency. While it’s not raining yet, Mike rightfully says, “you’ve got to be willing to be wrong for a period of time”. Dr. Paul warns, “a world-wide monetary crisis is fast approaching”.

I’m confident, “it’s gonna happen!” Just not sure when….

What’s the worst case? What if the meltdown doesn’t happen in my lifetime? I will be comforted in knowing I passed a never expiring insurance policy on to the next generation.

The special offer for our readers – a 50% discount – for ” Mike Maloney’s Early Warning” expires on August 15th. You can click HERE for more information.

I don’t like to sound pushy; however, I asked them for the favor and I hope our readers take advantage of it. The series is long and well worth what they are charging. It’s material I have not seen elsewhere!

Additionally, they offer a low-price guarantee for gold; however, their profit margins are already razor-thin and they are unable to offer discounts.

We are now vacationing in the mountains in Prescott, Arizona. It was 109 degrees when we left the valley. It was 93 degrees when we arrived a little over an hour later. When the sun went down the temperatures dropped dramatically and we were greeted with cool 60-degree weather at breakfast.

They have outdoor concerts in the courthouse square. We brought lawn chairs. If you are in the Prescott area, come say hello!

How appropriate it was when Bob O. sent along some never expiring Will Rogers quotations: 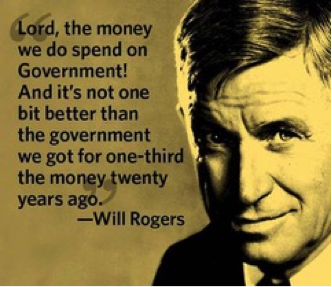 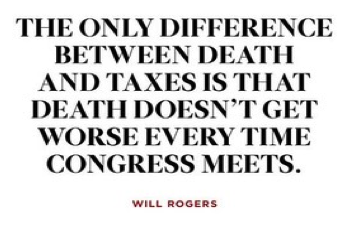