It’s time Uncle Sam takes a haircut at his expense 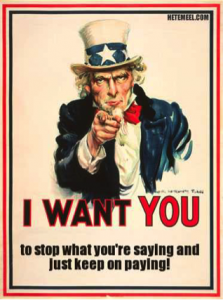 For the third time since 2010 social security recipients will not receive a Cost of Living Adjustment. The working class is cutting personal spending and businesses worldwide are doing the same. The Wall Street Journal reports:

“More than a year after oil prices began their descent to under $50 a barrel from over $100, the number of energy-company layoffs world-wide has topped 200,000, says Graves & Co., a Houston consulting firm. More cuts are expected because crude shows little sign of rebounding soon.”

The list of companies announcing worldwide layoffs includes Hewlett Packard, Kraft, Motorola, Lenovo, Tyson and Microsoft and is growing by the day. Other companies are instituting hiring freezes, caps on bonuses and across the board wage cuts.

Contrast those earnings with a CATO report telling us:

“In 2014 federal civilian workers had an average wage of $84,153, according the U.S. Bureau of Economic Analysis (BEA). By comparison, the average wage for the nation’s 111 million private-sector workers was $56,350.”

Mainstream America is losing jobs, pinching pennies, and worried about the future while the Federal Government continues to reward themselves.

When governments cut expenses, it’s to reallocate funds to their political base. When NASA was shut down the money was spent elsewhere. On the revenue side, the government looks for ways to raise taxes (and fees) everywhere possible.

In April, the IRS requested a $2 billion boost to its budget including adding 9,000 new employees. If the agents did their job, as opposed to spending their time harassing their political enemies, would they need any more people?

How about reducing food stamp fraud? Any regular grocery shopper can tell stories about people in the grocery line paying with food stamps blatantly abusing the system. With 45 million recipients there are plenty of places to look.

Congress has built automatic spending increases into the system. In essence, most departments will get an automatic budget increase over the previous year by the amount of the inflation rate. When politicos talk about spending cuts, it’s baloney. What they mean is they are increasing spending at a lower rate than the automatic increases already baked into the system.

To congressman Beyer I ask this. “What the hell does deserving more of an increase have to do with it?”

The people who lost their jobs, or took salary cuts in the private sector actually create something of value as opposed to government workers. They don’t deserve to lose their jobs or take pay cuts.

The millions of people on social security deserve a raise. They paid your damn bills for the 50+ years most of them worked. If you want to make an argument on “deserved”, your team goes to the back of the line.

Congress recently agreed not to shut down the government on December 11th; but rather extend the government’s borrowing authority until March 2017 – after the 2016 election. How convenient!

In an election year neither political party wants any discussion of the government’s out of control spending, including paying themselves wages well above what the private sector earns. God-forbid they would be held accountable. They prefer to divert public attention to peanut butter and jelly sandwiches in school lunch boxes.

If I had a magic wand

I believe the founding fathers made a mistake when they drew up the Constitution. Businessmen would leave their family farm or business and ride on horseback to Washington. Serving the country was a sacrifice. It never dawned on them that anyone in their right mind would want to make a career out of politics.

Government cost should be strictly controlled like a well-run business; and the revenue should cover the cost. Budget responsibly and all management must be held accountable. If our elected leaders are to truly serve us (instead of themselves) here is where they should start.

1. Congressional term limits. The public is tired of politicians who view themselves as part of the “elite”; particularly multi-generation political families. Our founding fathers never envisioned a government being run by people who never had a real job! Too many politicians are more concerned about getting reelected, than doing what is right.

2. Zero based budgeting in real dollars. Basing the upcoming budget on increasing what you spent last year is a recipe for disaster. Each department must justify their mission every year or there is no need to spend the money.

3. Match expenses with revenue. Institute an annual 5% automatic cut in real dollars until income and expenses are balanced.

The last time the government shut down, all “non essential” personnel were furloughed. When they came back to work they received back pay, amounting to an extra taxpayer-funded vacation. What the hell is a “non-essential” worker? In the private sector, every time you see a layoff, any job close to non-essential is gone; the weeding out process is ongoing. It’s time for the same thing to happen on a regular basis at all levels of government.

4. Raise tax revenue the right way. The government needs more taxpayers (you know, like real customers). There are 16 million+ more people on food stamps than there were in 2008. Get them back into the work force paying taxes. If you want to see how to do that, check how Presidents Kennedy (investment tax credits) and Reagan (cutting personal income taxes) went about it.

6. Use proper performance criteria for management. How well do they serve their customer, or complete their mission? One example of colossal failure; the Department of Energy is supposed to reduce dependence on foreign oil.

Have they been able to run their department efficiently at lower cost? Private industry rewards managers that follow that process. Responsible stockholders won’t tolerate being ripped off by management. Governments reward empire building.

7. Make them fly coach. The politicos are out of touch with mainstream America. No more limos and private jets; instead take a taxi and fly coach. They are not privileged, elite or royalty. They are employees we (those of us who fly coach) pay for each and every year.

Both political parties are doing everything they can to knock him out of the race. The political establishment is scared to death a real businessman or political outsider will get in office, and might actually try to cut back on their gravy train.

They should not worry. Until the majority of congress has a similar mentality, the corrupt government system will continue to roll along at taxpayer’s expense. Both political parties work together rewarding those who play by their system and ostracizing those that don’t.

Members of congress actually get free haircuts and a beauty salon at our expense. Enough already! There should be no federal exemption to the oft cited “pay their fair share” campaign slogan. It’s their turn to sacrifice as the private sector has been doing. “Don’t do as I do, do as I say”, is getting old. The public is fed up. I would rather see a revolution at the ballot box than another civil war.

On the Lighter side…

I had planned to discuss the World Series and something frivolous this week until I saw and read snippets of last week’s Republican debate.

The consensus was certain candidates did better than others; however the real loser was the mainstream media. Questions were asked about fantasy football, comic book villains’, and herbal supplements.

I disagree with the consensus. The real loser was the American people. The media just helped the Nero’ wannabees continue to fiddle. People are losing their jobs; real wages have not increased and retirees are scared to death – the debate was a sad joke.

While some of the questions and responses prompted laughter, and could be called entertainment, nothing I saw made me want to run to the ballot box and vote for someone who understands our nation’s problems and is capable of getting things fixed. Does anyone in the media and Washington understand just how fed up the working class really is?

I keep telling myself to keep a proper perspective. People have complained about their political leaders for thousands of years and will do so for a thousand more.

Almost on cue, today I received an email from friend Ed S. titled “Apolitical Aphorisms”. It could not have been timelier if I had tried to plan it.