I’ve Had It – Enough Is Enough! 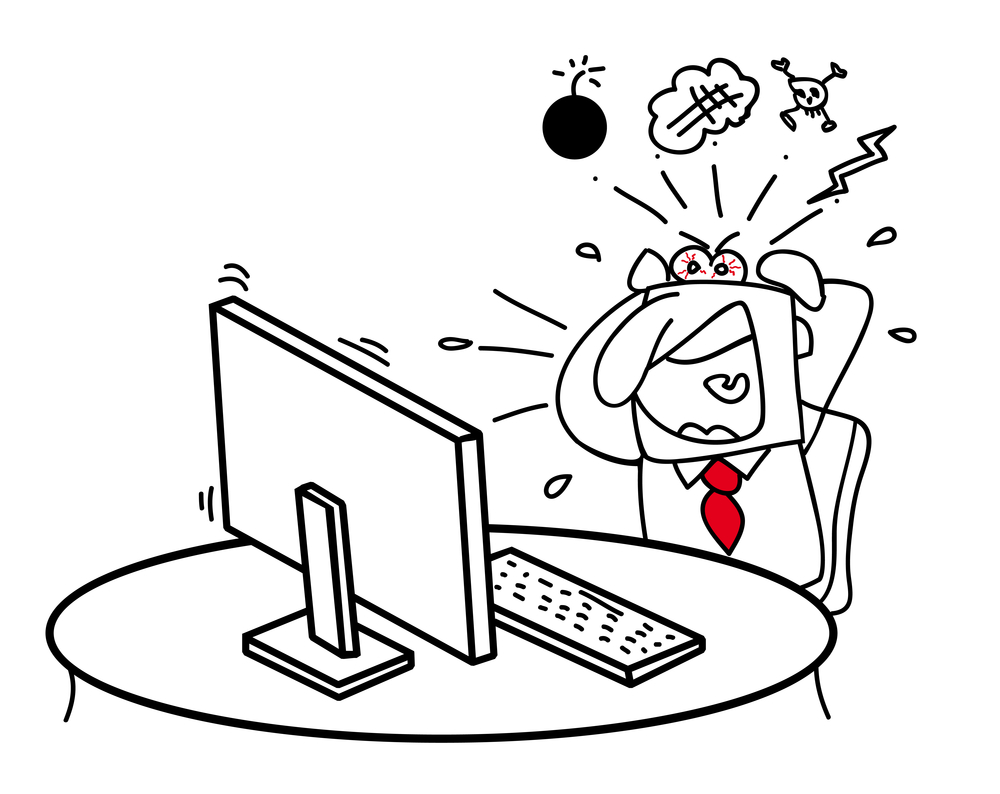 I’ve had it with the virus panic, riots, looting, property destruction and grandstanding politicians. A poor guy in Minneapolis tried to pass $20 in funny money and ended up dead. His $20 is pale in comparison to the trillions in funny money authorized by congress and created by the Fed to bail out a corrupt banking system.

Since the Glass-Steagall act was repealed on November 12, 1999, taxpayers have bailed out the major banks twice while these corrupt institutions steal much of the wealth of the nation. Never satisfied, the major banks continue to resort to crime and racketeering. The Fed and congress are accessories to the crime.

“The More I Learn The Madder I Get!”, outlines the details of the bailout bill, passed almost unanimously by congress. As it plays out, I realize this crap has to stop. It’s like monopoly, only the banks end up with all the money and the working class ends up in the poorhouse.

What caused this mess?

Prior to the 1929 crash, banks were using client’s deposits to make risky investments. Many banks failed and depositors lost their money.

Congress then set up the Federal Deposit Insurance Corporation (FDIC) to insure depositor’s money, and also placed restrictions on banking operations and overreach. The system worked well for 70 years, no depositors lost money and no bank bailouts.

The Institute For Local Self Reliance provides some history:

“The total number of banks in the U.S. began a period of dramatic decline in the late 1980s, owing to significant changes in federal banking policy.

…. The Federal Reserve began chipping away at the Depression-era laws that had barred commercial banks from engaging in speculative activity and constrained their ability to branch beyond their geographic regions.

…. These shifts in policy worked to the advantage of large banks and undermined community financial institutions.

Congress took these policy shifts even further in the 1990s when long-standing banking laws, including the Glass-Steagall Act, which had separated commercial and investment banking, were overturned.

…. It’s in these years, from the 1990s to the 2000s, that giant conglomerate banks, such as Citigroup and Bank of America, take control of much of the financial sector. These entities combined commercial banking, investment banking, insurance, and securities trading under one roof. They became so complex that regulators were unable to discern the huge risks that these banks had introduced into the mortgage market, which led to the 2008 financial crisis. (Emphasis mine)”

…. The Big Four of U.S. banking-JPMorgan Chase, Bank of America, Citigroup and Wells Fargo-have a combined $8.8 trillion in assets, or half the U.S. total.”

The Federal Reserve is OWNED by member banks. It’s obvious the Fed OWNS the votes of many in congress. Instead of overseeing the Fed, they pass laws enabling the corrupt system.

Stealing the wealth of the nation

Soon after the bailout, the banks continued paying huge bonuses and increasing their dividends.

“…. A number of government and Federal Reserve veterans…say they’d rather see the banks marshal resources for a rocky road ahead than continue paying shareholders.

…. From the start of 2017 through March 2020, the four banks cumulatively returned about $1.26 to shareholders for every $1 they reported in net income…. Citigroup returned almost twice as much money to its stockholders as it earned….”

The Fed recently told the banks to suspend stock buybacks, and cap their dividends at the current rate (well in excess of their earnings).

Fed Governor Lael Brainard disagreed with the decision to allow banks to continue to pay dividends:

“…. It is clear that recent changes in financial markets…could have a material impact on banks’ risk profiles and financial conditions.

…. The payouts will amount to a depletion of loss absorbing capital.”

WSOP looked behind the curtain:

“Vice Chair Quarles slipped it into a footnote of a…speech he delivered on June 19 in Washington, D.C.

In order to give all banks subject to this year’s exercise sufficient time to understand their stress test results and make any necessary changes to their capital plans, we expect banks to wait until after U.S. markets close on June 29, 2020, to publicly disclose any information about their planned capital actions and stress capital buffer requirements. Doing so will provide for a more orderly dissemination of information to the public.

…. It just so happens that Goldman Sachs is set to pay out a dividend of $429.86 million on – wait for it – June 29. That will be its second dividend payment in that amount this year ….”

Say good-bye to our wealth

The 2008 bailout was passed against overwhelming public outcry. The low rates were supposed to be temporary. Yeah right! This graph shows the interest rates on 10-year treasuries since 1-1-2000.

Five years after the bailout economists estimated the combined interest savings by the banks and government topped $4 trillion. That interest would have primarily been paid to savers and pension funds. I’m confident it’s well over $10 trillion by now.

Congress governs against the will of the majority. $10 trillion more in 401k’s and pension funds would make things a lot brighter for the country today.

The government and banks are addicted to low interest rates.

In the meantime, every retiree, pension fund, annuity and saver are seeing their wealth stolen by the corrupt system.

The 2017 net worth calculator indicates a net worth (excluding your home) of around $2.5 million puts you in the top 5% category.

Assume baby boomers Joe & Jane Smith worked their tails off, saved their money and retired at age 65 with $2.5 million. Most would look at them as rich. For years retirement experts estimated a 6% return on their savings; they would be set for life.

Remember the old adage, “Live off the interest and NEVER touch the principle?” Good luck with that!

They face tough choices. They can buy risky bonds, or invest heavily in the high-risk stock market searching for income. Even after downsizing, they probably have to tap into the principle to pay their bills. Let’s estimate they need $100,000 plus social security to cover their expenses.

How long will their money last?

Jeff Clark’s recent article, “How to Deprogram Your Friends & Family from the Cult of Fiat Currency,” is a primer on inflation.

“…. In the meantime, the robbery continues. Because we live in a fiat world-where paper dollars are “money” because the government says they’re money-they can be diluted at will.”

He provides this graph: 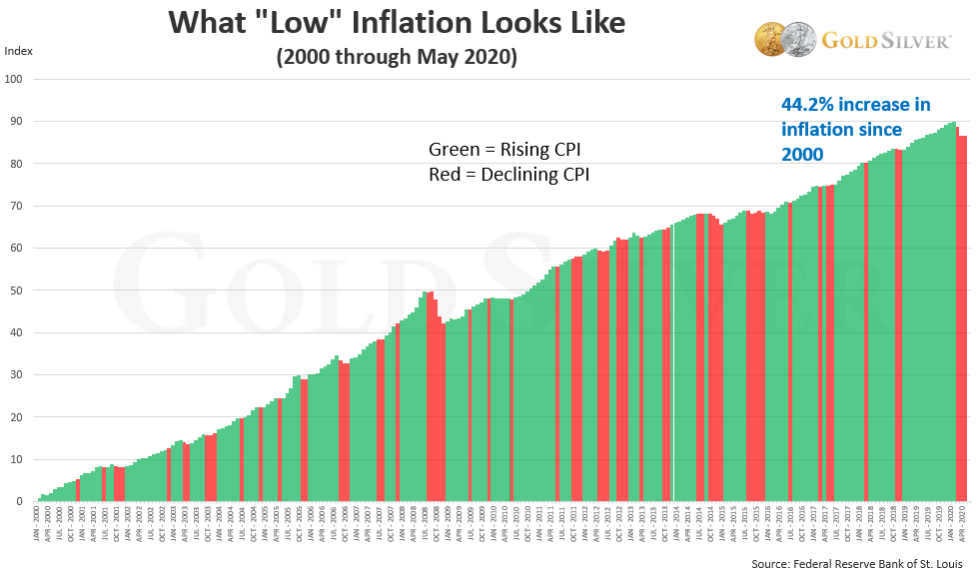 That means that the dollars you saved 20 years ago have lost almost half of their purchasing power. …. You’ve done nothing wrong, but there’s a serious leak in your financial boat.”

I made some assumptions about the Smith’s; they would earn 3% (after taxes) on their investments, inflation would remain at 3%, medical costs would not rise above the general inflation rate, and no changes would be made in their social security.

Using the Motley Fool Calculator, their money will last a little over 25 years. 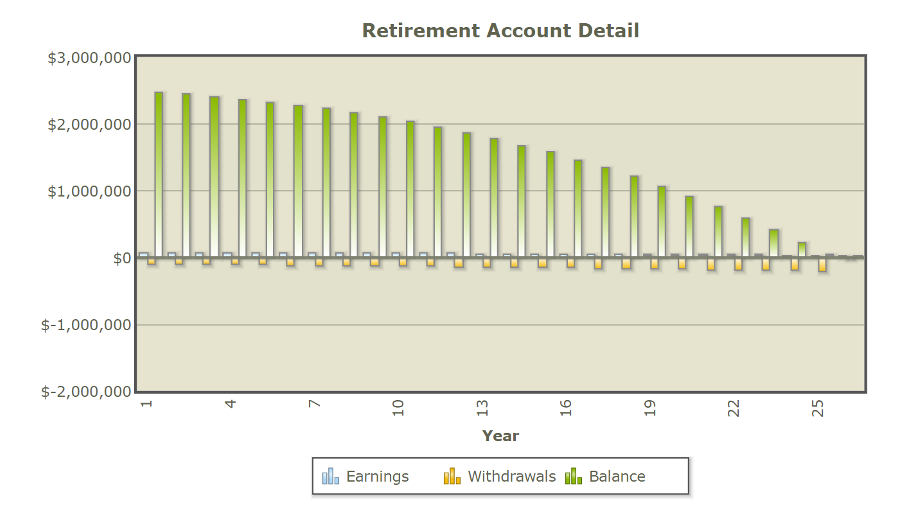 No wonder people fear running out of money more than they fear death. Instead of enjoying a comfortable retirement, knowing they can pass some of their wealth to their children, the Smith’s will constantly fear their eroding wealth – all being stolen by a corrupt government and banking system.

When Chuck Butler said, “Everyone must flood their congressional representatives demanding reinstatement of Glass-Steagall,” he was not kidding. If banks are “too big to fail”; break them up.

I’ve had it! Capitalism isn’t the problem; congress fiddles as the wealth of our nation is being stolen by a handful of banks. Enough is enough! This has got to stop.

Baseball season is upon us. It’s weird watching a game with no one in the stands. I hope the networks don’t turn my favorite sport into a political fiasco. I’d much prefer to be in Indiana watching our grandsons play ball. It’s pretty easy to get emotionally connected when the kids are playing.

It seems like yesterday that our youngest son’s college baseball team won the national championship. My gosh, that was 35 years ago. Daughter Dawn sent us a cool video of a family vacation in 1992. Lots of laughter, hugs and smiles. I can remember it like yesterday. Where the heck did the time go?

I’m hoping we can drive across the country after my next treatment. I’m sure a lot of families are missing out seeing their loved ones this summer. Hugs and smiles from family and friends are good for what ails ya!

Is it even possible for congress to work together for the good of the American people? We will survive despite the political class. Throw them all out, pass congressional term limits, and get on with it already.

Friend Scott L. sent along some “Murphy’s other laws”. According to this history, “Murphy’s Law” is totally misunderstood.