Keeping Our Wits During Chaotic Times 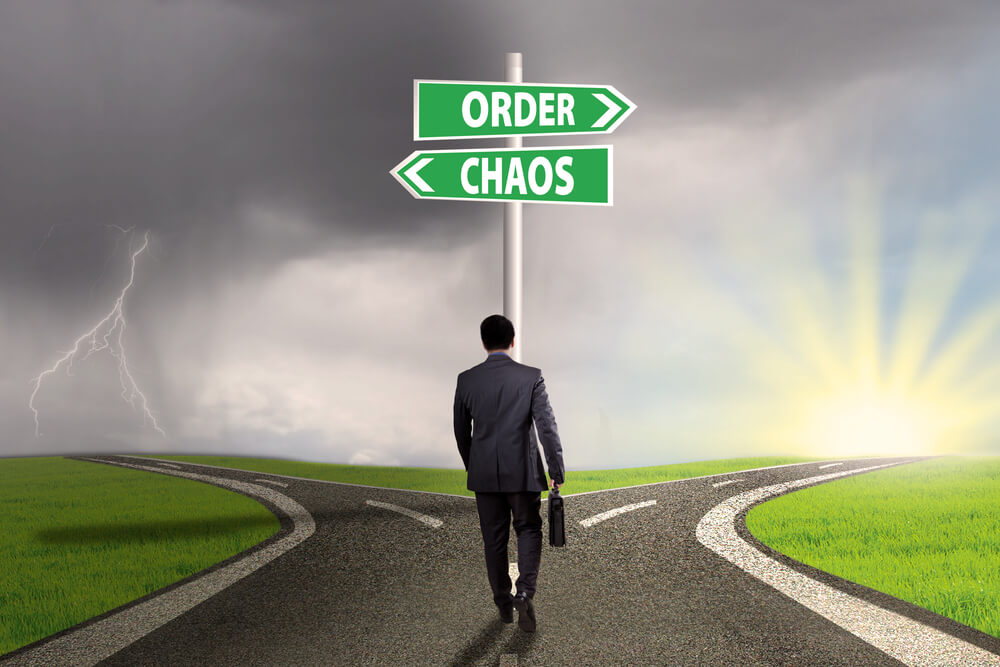 Times are chaotic! Historically, when chaos reigns and emotions are turbocharged, there are winners and losers. Despite the stress, winners manage to see things clearly and keep their wits about them.

Recently we interviewed John Williams at Shadowstats. He said government unemployment and inflation numbers are bogus. He also tells us:

– Production and Manufacturing Tumbled the Most in Their 101-Year History

– Second-Quarter 2020 Real Annualized GDP Contraction of About 50%. (-50%) Will Surpass Anything Ever Seen

– U.S. Economy Already Was in Trouble Before the Pandemic, because of …Federal Government Fiscal Malpractice.

Jim Rickards, “Don’t Believe The Happy Talk”, predicts the collapse of the dollar. He sums it up this way:

“Nothing like what we’re witnessing has ever happened before. Even the savviest analysts cannot yet internalize what happened.”

Might this be the “big one – ain’t gonna be pretty” crash pundits have warned about for years?

Keeping our wits and staying afloat

Baby Boomers have little time remaining on the clock to recover from a crash. We have to keep our wits about us, see things clearly and make prudent decisions.

“Well…. This is going to be tough for me to spit out this morning, so please do not have a knee-jerk reaction, and fire me off an email. Please read what I’m saying and see where I’m going here… That’s all I ask…

Global debt is at levels that it should never have reached in a million years, but it’s there, and there’s no paying back, in the traditional sense of paying off a debt…. So, how are the countries around the world …. going to deal with this ever-growing debt? …. I know what the answer is, and I’ve fought saying it, for so long, because, well, I just didn’t want to believe it could happen….

DENNIS: Chuck, I see problems. Our US debt just topped $25 trillion and is rising rapidly. The bailout bill passed the Senate unanimously, and only one dissenter in the house. Congress doesn’t seem to care. What the heck is going on?

CHUCK: Dennis, I had been putting off this subject, but know my readers expect me to tell it to them like I would if they were on my back patio.

I believe the currencies of the world, that we know today, will no longer be around in a few years, maybe even this year!

I expect Global Debt around $300 Trillion at year’s end. Look at that amount of debt, and tell me the rich could pay off the debt!

Government’s options are to grow their way out of debt, or possibly inflate it away, but that’s highly unlikely. Why do you think the Fed keeps harping about spurring inflation? They see the writing on the wall for the third option – default – by almost every country that’s in debt up to their respective eyeballs, including the U.S.!

This will start a chain reaction that will change things the way we know them to be.

DENNIS: This whole mess happened so fast. For most of my life, things seemed manageable; the last decade is nuts.

CHUCK: I understand. We have discussed how the 2008 bank bailout changed the world. The Fed dropped interest rates to historic lows, hoping consumers would borrow, spend, spur the economy and create jobs.

In some ways, that happened, the housing market rebounded, personal, auto and student loan debt skyrocketed. This debt was dwarfed by government and the corporate world.

Today, the world is like the morning after a decade long fraternity party. Once the headache is gone, you had fun, but little to show for it. What wealth was created ended up in the hands of the top 1-2%; the rest of us are not much better off.

Most of this debt is packaged in bonds and bond funds held in investment accounts, government, corporate and individual pension funds.

DENNIS: So now what?

CHUCK: Despite the “Happy Talk” Bill Bonner mentions; the default will cause a stock market collapse.

The Fed always runs to save Wall Street. When you look in their quiver for rate cut arrows you only see ¼ of an arrow left. What to do?

This is where things get really ugly, Dennis. With no other options left, the Fed will go negative with interest rates – banks will charge you for holding your money in their bank!

What would most people do? I’d be first in line withdrawing my funds, only keeping enough to pay bills; I see runs on banks coming. The government, anticipating a run on banks, has already prepared a ban on holding cash.

One Monday morning, you’ll pull up your bank balance and find that dollars no longer exist in your account, instead, you will see digital units or government-backed cryptocurrency.

The International Monetary Fund (IMF) will step in and issue newly created Special Drawing Rights (SDR) for countries to use to affect trade. The SDR’s won’t be for individual use; they’ll only be used by countries trading with one another.

DENNIS: What does that mean for the average investor trying to make their 401k last?

CHUCK: Well, no matter how much money the Fed prints, they aren’t going to keep a prop under the stock market, and the folks that have stocks in their respective 401K’s will also be taking haircuts.

Dennis, a default sounds like a big deal since we’ve never experienced a default of U.S. debt, in our lifetimes. It will be a very BIG THING! Investors worldwide will be forced to sell assets to bring their money home, to deal with their own local problems.

DENNIS: At one time speaker Pelosi said the stock market is much too risky. She wanted to require retirement plans to hold “safe” US debt. Sounds like an oxymoron to me. Might congress try to pull a fast one and require dollars in retirement plans, then devalue the dollar?

CHUCK: Yes, we could very well see this… A few years ago, the rumors were rampant that the Gov’t would require ALL retirement accounts to hold nothing but U.S. Treasuries… Imagine that… You hold nothing but Treasuries and then the Gov’t defaults, thus making Treasuries lose so much value that it would make your head spin….

Same thing with your scenario… After the default the dollar’s value will be near worthless, which is a BIG reason for changing the dollar to digital units. They will call it something else, but buying power will be much less.

DENNIS: We want to see things clearly, keep our wits about us, not panic and protect ourselves. Digital currency will turn some counterfeit expert computer geeks into instant billionaires. What is Chuck doing to protect the Butler family life savings?

CHUCK: This scares the bejeebers out of me. I hope and pray that it doesn’t happen the way I’ve explained it. I wouldn’t say things like this, if I saw another way out of this debt mess.

Recently I sold most of my stocks, and only own a few mining stocks, and one company that makes police cams. I’ve taken Treasury maturities and invested them in bank CD’s. Be sure to spread them out and stay within FDIC protection…

Withdrawing cash and hiding it under the mattress or back yard coffee cans isn’t going to help if the Gov’t outlaws holding cash – unless you have someone to deal with in the black market.

I own land that will never get sold as long as I’m alive. But don’t despair, at this point I believe we would see Gold gaping higher by $100 a day. I hope we never have to sell our physical Gold & Silver holdings.

As always, I ask the question… Got Gold?

DENNIS: Last question. Why does it always seem to get back to gold?

CHUCK: Gold has been a store of wealth for thousands of years. There is only a finite amount. Most all of the gold that has been mined is in existence today.

“Gold is kryptonite to big spending politicians. It is to the moochers and looters in government what sunlight and garlic are to vampires.”

Paper money, seashells or cryptocurrency is no better than Rumpelstiltskin straw. Gold is real money!

Thanks again for inviting me, Dennis.

Dennis here. Wow! I agree with Chuck, and hope he is wrong. Meanwhile, winners will understand the risks and protect themselves. Got Gold?

We posted a Memorial Day message and over 2,300 people responded with likes, thumbs up and some comments. I was looking for a photo for something else and it caught my eye. Tears welled up. I immediately bought the image rights and decided to use it for Memorial Day. Apparently, it touched a lot of hearts….

I’m really saddened by what is going on in Minneapolis. I sure hope justice prevails. One thing that bothers me is I was in Elgin, IL in 1967 when riots took place. It was sad and scary. Over 50 years later, I’m seeing the same things all over again. John F. Kennedy said, “Those who make peaceful revolution impossible will make violent revolution inevitable.” I wish I knew the answer.

On a positive note, I see where the hockey is considering a 24-team playoff, baseball and football are also looking forward to getting started. For the sake of morale, we need to get our nation’s sports going once again.

The Indian Hills Community Center, in Colorado has a famous sign, which is curated by Vince Rozmiarek, a Colorado native, that always has a hilarious pun on display for the amusement of passers-by. 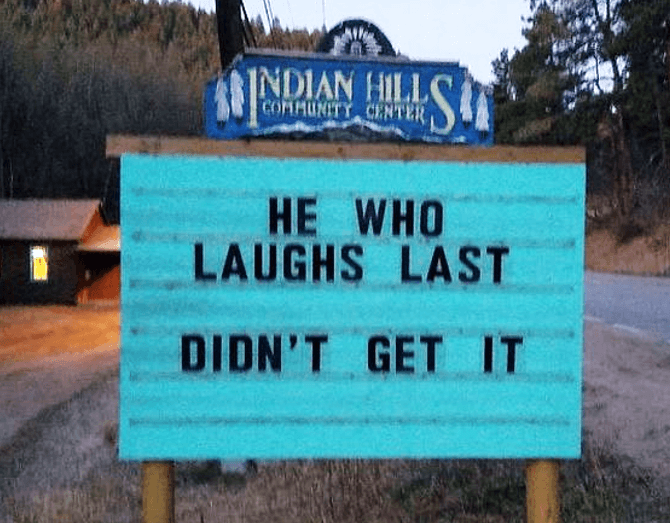 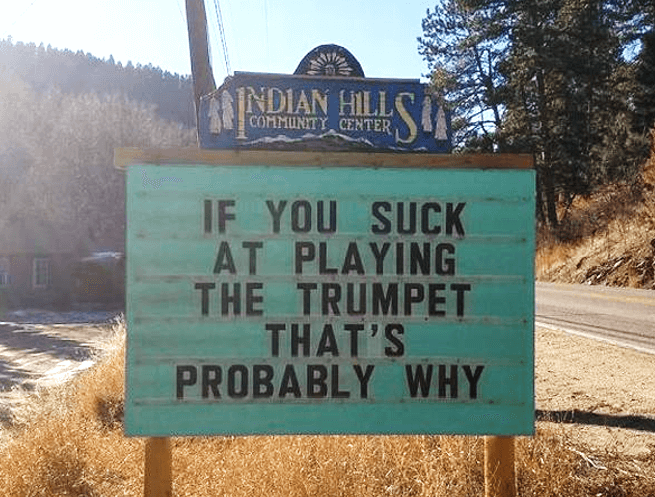 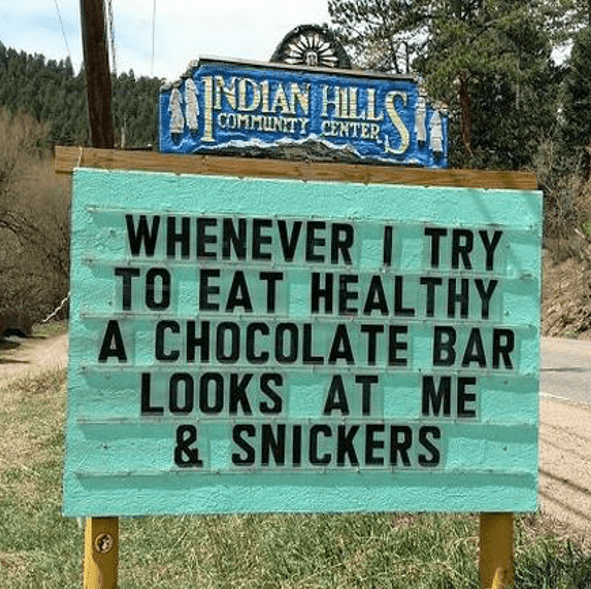