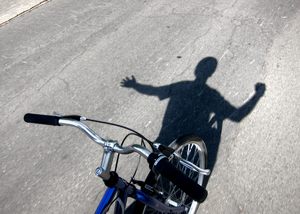 “Look Ma! No Hands” refers to a kid riding his bike without using his hands; a risky act of courage and daring.

Family elders used the term as a warning sign when kids were showing off. I’d have scoffed at today’s kids (“chicken!”) wearing helmets while riding their bike. Falling off and skinning up your body was how you learned to ride.

Yet, in my 60’s I rode my bike for miles and insisted on wearing a helmet. While the crash probability might be slim, a helmet protects against a traumatic head injury.

Our recent article, “Inflation Is Quietly Poisoning Your Retirement Nest Egg” dangers from a sudden spike in inflation, and how gold could be used for protection.

“First… is a recommendation by Chuck Butler (about how the dollar reserves are falling) – “It’s all happening right before our eyes folks…. I sure hope you’ve properly diversified your investment portfolio using currencies and metals.”

Would you consider sharing your views regarding currencies as a haven?” (Emphasis mine)

Gold and foreign currencies are insurance. Like helmets, you don’t need them – until you do! Then you’re doggone glad you have the protection.

DENNIS: Chuck, on behalf of our readers, thank you for your time.

Let’s start at the beginning. How can holding foreign currencies help offset inflation of the US dollar?

CHUCK: Thank you Dennis for inviting me.

Inflation eats away at the dollar’s value. If a U.S. bond is paying 5%, but inflation is 3%, then the “real yield” is only 2%. Investors around the world would look to buy bonds from other countries that pay higher “real yields”.

Generally, when the economy is in dire straits, the dollar is too. In times of high inflation, people are dumping one currency and hope to buy another that is increasing in value, allowing you to protect your purchasing power. Prudent investors use currencies as another form of diversification.

DENNIS: What do you look for? How do you know which ones have the best chance of rising while the dollar falls?

CHUCK: Dennis, I’ve been associated with currencies since 1985. When valuing a currency, you have to look at the currency as the “stock of a country” – and then use your own criteria for valuing a stock.

Is it a debtor nation? Do they pay a yield? Do they have good leadership? Do they have a prudent Central Bank? And, a very important item, do they have something that other countries want?

You’ll really only come up with a handful of currencies that make sense to own and hold as a diversifying tool.

But on a sidebar…. Currency trends are long sweeping events. While they may have a strong general direction, expect some volatility – nothing is a ONE-WAY street. When the dollar is in a “weak dollar trend,” like it was from 1971-1978, 1985-1995, and 2002-2010, most currencies gained versus the weak dollar. Those with the best fundamentals versus the dollar will be the biggest winners.

Since last June I’ve been telling readers that I believed the sentiment was changing and the dollar was beginning to enter into its next “weak dollar trend”. Since that time, the dollar has lost 13% of its value, when you look at just the Dollar Index.

DENNIS: We both advise against “all in”, whether it’s the stock market or metals. How important is currency diversification?

Diversification is not just about stocks, bonds, mutual funds, etc. A properly diversified investment portfolio, as explained by Markowitz in his “modern portfolio theory,” would also contain currencies and metals. Asset classes that have different pricing mechanisms as compared to other holdings in the account.

You wouldn’t own just one stock, would you? Once an investor realizes the need to diversify, they should diversify by owning a handful of different currencies. Safety through diversification is one reason people buy mutual funds – you wouldn’t want to own just one foreign currency either!

DENNIS: What currencies would you recommend today?

CHUCK: I believe that you should always start with the offset currency to the dollar, which these days is the euro. If the dollar continues with its new weak trend, then the dollar will get sold, and the euro will benefit. There are other reasons to own euros. The negative shadow of Greece and negative interest rates, seem to be coming to an end.

Here’s a chart I borrowed from your recent article. Russia has doubled their reported gold reserves over the last five years. 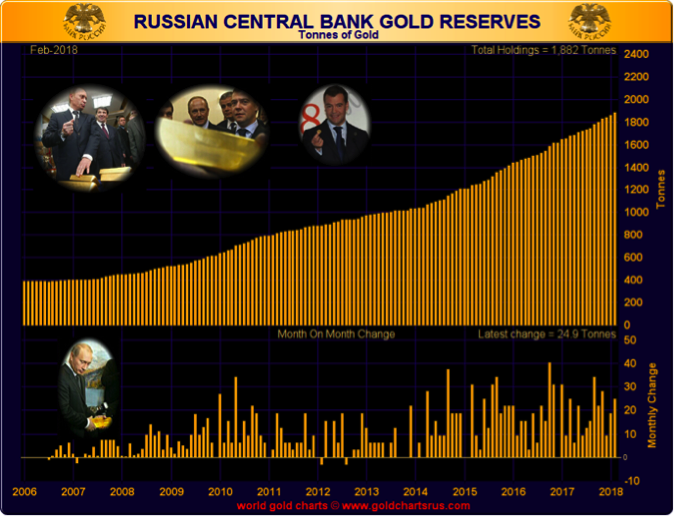 Gold and Oil are two things other countries want, eh?

I feel the Russian ruble is undervalued. Their economy has recovered from a recession and has dealt with the sanctions from the U.S. and Europe, quite nicely. The price of Oil (that plummeted) continues to recover. The ruble should take off for higher grounds along with the price of Oil.

The Aussie dollar is another example with their vast supply of raw materials, like iron ore. When interest rates around the world begin to get back to normal, the Aussie dollar historically has enjoyed a nice interest rate spread vs. most countries in the world, including the U.S. dollar.

And if the price of Oil ever gets to $70 again, you’ll want to make sure you own some Norwegian krone, Brazilian real, or Canadian dollars, in addition to the Russian ruble.

So, there are a few for investors to ponder buying…

DENNIS: Chuck, let’s assume readers agree, foreign currency is another important level of protection. Let’s discuss various ways of how they would go about it.

In our offshore account, we hold stocks, bonds and, cash denominated in several different currencies.

While I don’t recommend any brokerage firms, I see Schwab now offers a Global Account option giving investors access to several foreign markets. Note that fees are charged for stock and bond trades and also for currency conversion. They offer both online and broker-assisted options, so savvy investors can probably trade online.

When we receive interest, dividends or a bond matures, we do not pay conversion fees. Those fees only happen when we do a currency swap.

Chuck, what are the pros and cons of using a brokerage account to trade offshore and hold foreign currencies?

CHUCK: Dennis… I’ve long been leery of having a brokerage account offshore. While this may be emotional; there are time differences, language differences and the fear that investors may not have the US regulatory agencies or courts, should you believe your broker did something wrong or unethical.

I put this down to a degree of risk. Some investors might feel I’m being too conservative in my thinking – and they might be correct.

But I’ve long said that if you were going to buy a foreign stock or bond, do it in the local market. In other words, if you want to buy Nestle, buy it in a foreign account so it’s denominated in Swiss francs.

Now, if your US broker offers the ability to trade internationally in the local market, then you don’t have to open an account offshore, you don’t have to deal with time differences or language barriers and you have the advantage of the US laws and the court system.

Owners of foreign stocks or bonds receive interest and dividend payments denominated in the foreign currency. If you don’t want to immediately convert those payments back into dollars, you will need to hold cash in those respective currencies also. Investors should check with their broker to be sure they can have foreign currency holdings in their account.

Investors need to research their foreign stocks just like they would US stocks, you need to know something about the company you are buying. But again, that’s a risk level that many investors are not afraid of.

Just like the US, I would steer clear of bonds when interest rates are rising – unless you plan on holding them to maturity. While bonds can be resold, I’m not sure how easy (or expensive) it would be to do so with foreign debt instruments.

Another way to hold foreign currency is in a CD or a deposit account. Depending on the time frame, generally, both principal and interest are paid at maturity.

A deposit account is simply a “savings account” like an old passbook savings account in a bank. You can buy and sell your currency in an account like this at any time the bank is open. You get liquidity but give up interest unless the interest rate structure in the currency is above the rest of the world.

To be continued next week…

Foreign currencies are an excellent tool for inflation protection. Next week we discuss alternatives that readers can easily implement, with little capital, without having to open an offshore account.

The second half of the interview is a real “how to” primer.

Last week I mentioned how much fun we had at the Copper City Classic, a baseball tournament played by the rules in the 1850’s. Note the catcher giving a target to the pitcher who is throwing underhand.

One interesting rule: “Balls caught on the fly or on one bounce by anybody (players from either team or spectators) are outs.”

If that rule were still in place today, imagine the chaos in the stands. I felt sorry for Steve Bartman. He had to be escorted out of the stadium by security guards and was placed under police protection, for disrupting a catch in a critical 2003 playoff game. 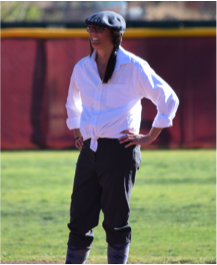 It was a nice gesture when Cubs owner, Tom Ricketts gave Bartman a World Series championship ring when the Cubs finally won it all.

It appears they have modified the rules a bit since 1850. This young lady has a striking resemblance to our daughter Holly. She quickly became our favorite player and we rooted for her team. They won both games we watched. I seriously doubt that women played baseball in the 1850’s. Maybe there were some “Annie Oakley’s” of baseball at that time, but I’ve not heard of them.

Reader Robert H. supplies us with some food for thought: