When The Market Crashes, Will It Come Back In Your Lifetime? 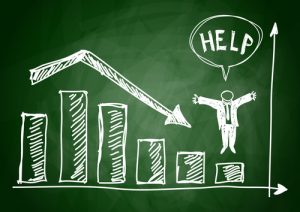 The sign on the booth touted a new, sophisticated computer-generated money management program. I walked inside and asked about stop losses. The young man replied, “Hold on to your stocks, the market always comes back.” I countered, “Can you guarantee it?” He pulled up a chart with some blips, concluding the market has always come back from a crash.

I followed with, “Can you guarantee it will come back in MY lifetime?” He responded, “No, you could get hit by a car or something.” He missed the point entirely.

In my recent article, “Stop Losses Are a MUST For Retirement Investors” I mentioned it took 25 years for the market to come back from the 1929 crash.

Subscriber John B. writes, “…You have to take inflation into account. How much purchasing power did you lose during that time? How long until you get back to the high that provides the same purchasing power?”

Subscriber, friend and former colleague, Jeff Clark went one step further, sending me his article, “This Chart Might Make You Rethink the Adage Stocks Always Come Back” which addresses the inflation issue.

I asked Jeff to do an interview.

DENNIS: Jeff thanks for your time to help educate our readers. I want to start by clarifying today’s discussion. The market is at an all-time high and has not had a major correction for quite some time. I’m not discussing the possibility of a major correction; personally, I think it is just a matter of time. I assume we are in agreement on this issue?

JEFF: First of all, thank you for inviting me. Yes, I agree with you. Our company founder, Mike Maloney feels the stock market is facing the mother of all crashes. That’s why I responded to your article on stop losses. Without them, a lot of investors can be badly hurt and the market may take longer to recover than they anticipated; perhaps never in their lifetime.

DENNIS: “Coming back” in our lifetime is a major concern, particularly when inflation is factored in. Before we get into the details, I thought it interesting when you discussed how “Stocks Always Come Back” is different for various generations of your family.

Can you explain to readers what you meant?

JEFF: It’s basically an issue of time. I have a daughter just starting out in her career, and a son getting ready to do the same. They have 40 years to invest, capitalize on compound interest, and important to our discussion, recover from a major stock market crash. In fact, unless you believe the end of the world is coming, a crash might be a wonderful thing for them – they’d get to buy stocks at a steep discount.

My wife and I are in the middle of the picture. We have a decade before we retire, so we can take advantage of normal corrections and dips. A crash is a different story. I am forced to consider what might happen to the stock market over the next decade, which is what prompted me to research this topic in the first place. If it takes 20 years to get back to even, including inflation, well, that would definitely hurt us if we were in the stock market.

On the other end of the picture is my retired parents, both of whom are approaching 80 years old and clearly don’t have a large timeframe to wait for stocks to come back. A crash to them would be devastating. They’re forced to avoid that risk.

How much of an effect does inflation really have?

JEFF: When I first saw one of those charts the stockbrokers always pull out showing the market always comes back, I quickly realized that, while the long-term trend was indeed up, there were a few crashes that took a very long time. So my second thought was, well, now I’ve got to take inflation into account. If they were all only a year or two or even three, I might not worry about inflation. But the big ones, the true crashes, were all measured in decades. Now inflation has to be factored into the recovery.

The reason that’s important is exactly what reader John B pointed out. If it takes 10 years for my brokerage account get back to its original nominal price, inflation has made a serious dent in my purchasing power. My statement may show I’m back to $50,000 where I started before the crash, for example, but guess what… cars and everything else cost more now, even in a low inflation environment. Now I’ll have to spend $70,000 to get the same Mercedes model I had my eye on 10 years earlier. Is my brokerage account really back to even? Hardly.

Here’s just one example from the research in our article…

“The Nasdaq fell 78% in the “tech wreck” of early 2000. Most investors look at a chart and see the index is now higher on a nominal basis. But adjusted for inflation it’s still down 17.6% from its March 2000 peak! In other words, almost two decades later, tech stocks are not back to the same level of purchasing power, despite the index being higher on a nominal basis.”

Those charts brokers always pull out to show us are never inflation-adjusted. Ergo, they’re misleading.

DENNIS:  Did you use the government CPI figures when calculating inflation?

JEFF: Yes, because that information is readily available.

DENNIS: One final question. Our mutual friend Chuck Butler regularly discusses the “hedonic adjustments” the Bureau Of Labor Statistics makes to the CPI. He calls it the “stupid CPI” and I agree with him.

John Williams of www.shadowstats.com is an economic guru who calculates the inflation rate using the same method used in 1990 before the government began playing their games. He compares the government data to the 1990 formula. The 1990’s calculations show our current inflation is around 5.75%.

If we couple John’s estimates with the fact the Fed is hell-bent on creating inflation, when a correction happens, it could be a very long time before the market returns to the same buying power.

Jeff, it looks like two potential threats to a retirement portfolio.

The second threat is inflation, which can dramatically destroy your buying power. The CPI inflation numbers you used in your study are scary enough, without even factoring in the Shadowstats numbers.

JEFF: In my opinion, anyone doing retirement planning must consider those two threats, and prepare for them. Stocks are clearly overvalued. And just as the saying goes, the higher they go the harder they’ll fall. And second, inflation is low by historical standards and is at much more risk of rising than falling.

What I am personally doing is buying the only major undervalued asset class out there, gold and silver. Stocks are at record highs, bonds prices are in a 36-year bull market, and the average property price in the US is now higher than it was at the peak of the 2006 bubble. Gold and silver, meanwhile, are roughly a third and two-thirds below their last bull market highs, respectively. Simple prudence dictates a reallocation.

And of course, gold and silver are one of the history’s best inflation hedges. I’m not a gold bug; I just believe I can not only get better value with them right now but as inversely correlated assets, they will also be likely to rise when other assets fall. And, if we get some kind of monetary crisis from all the money printing and obscene debt accumulation, well, gold won’t be just a defensive weapon but an offensive one.

For now, it’s wise to hedge against overvalued markets, pricey real estate, a bond bubble, runaway debt levels, and monetary dilution. Heck, even a war seems on the table now. And as a bonus, you get to buy those hedges on sale. As a result of all this, I am overweight gold and silver and still buy them regularly.

DENNIS: Jeff, thank you for your time.

Dennis here. Baby boomers and retirees should factor inflation and personal longevity into their retirement strategy. The goal is to protect the buying power of your nest egg for the rest of your life. Holding some precious metals is a good hedge.

Stop losses are a MUST. As Jeff said, once you reach a certain age preservation of capital takes precedence. Retirees cannot afford to gamble on the buying power of market coming back in their lifetime; the risk is much too high! 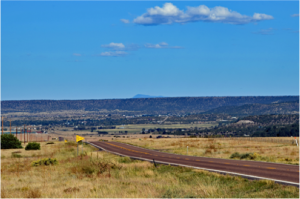 We enjoyed our weekend with the Carlson’s, in Pinetop, AZ. The White Mountains are beautiful.

Temperatures were cool, high 60’s during the day and the low 30’s at night; quite a change from the heat in the desert valley in Phoenix.

We drove over the mountain (7,300 feet) to Eagar, AZ. It’s a wonderful drive through the pine forest and down the mountainside into Eager. The mountaintop you see in the distance is in New Mexico, about 12 miles east. 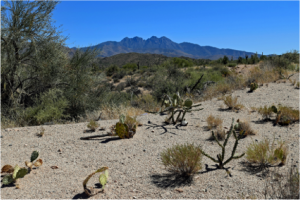 If you have never driven up AZ highway 87 from Mesa to Payson, I highly recommend it. It is a unique drive-through Tonto National Forest. As you start climbing the mountains you see thousands of beautiful saguaro cactus; and all of a sudden they stop… It’s an imaginary line where it becomes too cool for them to grow and thrive.

On the drive home, we stopped and shot this photo of the 4-peaks, which is a local landmark. In the local gift shops, you will likely find pictures and postcards of the mountains with snow on them. I think we found the right spot for photos and we plan to drive back early in the year hoping to see them wearing their white blanket.

Each fall Pinetop has a huge combination craft show and car show. Mark Gable, owner of Gables Sign Works in Snowflake, AZ, manned my favorite booth. He has some clever signs and was kind enough to allow me to pass along some I really enjoyed.

And Jo’s favorite, now hanging in our kitchen: