No Matter What You Call It, Storm Clouds Ahead

Academics have their code words when times get tough. Do we have high inflation? Are we in a recession, depression, or stagflation?

Few people care what they call it, other than politicians who want to blame their political enemies and avoid responsibility. Both the disease and cure hurt people economically.

The Fed says they target 2% inflation. When inflation started rising, they changed the target to “average 2%” with no further explanation. Inflation continued to roar. They ignored it, called it transitory, continued to create more money, bought debt in historic portions, while the government deficits set records.

“‘The FOMC’s overarching focus right now is to bring inflation back down to our 2% goal.’ He also implicitly critiques their own policy shift…where they said they would tolerate a period of higher inflation above 2% to average out a period of below.”

“Our responsibility to deliver price stability is unconditional…. We are committed to doing that job.”

…. “Reducing inflation is likely to require a sustained period of below-trend growth. …. Moreover, there will very likely be some softening of labor market conditions.”

“While higher interest rates, slower growth, and softer labor market conditions will bring down inflation, they will also bring some pain to households and businesses. These are the unfortunate costs of reducing inflation. But a failure to restore price stability would mean far greater pain.”

…. “We will keep at it until we are confident the job is done.”

“Mr. Powell is right. Getting control of inflation will be painful. Higher interest rates will mean less borrowing, less hiring, less shopping, lower profits, lower asset prices and lower tax receipts for the US government. It’s a recession, in other words. And it’s how the economy corrects the mistakes and excesses of the Bubble Epoch. That’s the whole idea.

But the pain has hardly begun. The Fed has to get ahead of inflation, not trail far behind it. It has to continue raising rates, until something gives – either inflation…or its own backbone.”

Powell is talking tough – but….

Interest rates for borrowers and lenders must rise above the inflation rate, and government spending must come down. In one month in 2020 the Fed added more new money into the economy than had been printed in the previous century.

Raising interest rates will continue to slow the economy. That costs people jobs, business will slow down, and the current recession will continue to deepen – the “unfortunate costs of reducing inflation.”

Paul Volcker tackled the problem in the early 1980s.

Times were tough but within three years things leveled out and GDP began to rise once again.

Richard Maybury of U.S. & World Early Warning Report, feels the Fed really has two choices; don’t act and we see triple-digit inflation and the economy eventually collapses -or- act responsibly and thread the needle, hoping to avoid another Great Depression. 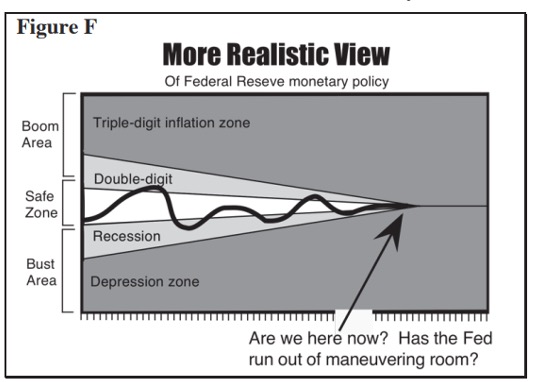 Does Powell have the backbone to finish the job?

“Fed officials know they can’t let inflation get out of control. But they also want to see a “soft landing” for the economy. I see high risk that they will take some kind of “pause” in the rate hikes later this year. They’ll say they want to reevaluate data, blah, blah, blah.’

The government and the Federal Reserve’s policy errors created the current situation. I see many more opportunities for policy error in the future, with potential results ranging from bad to calamitous.

…. We could easily get a few good months that lull everyone to sleep. If so, we may wake up to a nightmare.”

“Because of the zero percent interest rates, and currency printing that the Fed did, the Boom economy lasted longer than it should have. People should have been saving/investing during the boom times.

If they didn’t, well… I’m afraid for them, because, in my opinion, this is not going to be a quick and done recession.

Many will be looking for more stimmy checks. If that doesn’t happen, if they haven’t built a saving cushion to draw from in the coming months, people will not be able to feed their families and maintain a reasonable lifestyle.

…. I don’t believe the Fed is going to stop their rate hikes just yet, so more damage to the stock market should be in the offering.”

I asked Chuck if he felt Powell had the backbone to see things through.

“While Powell is talking tough, I agree with John. I feel that pressure from the casino banks, and political class will cause the Fed to pause – ‘We’ve done enough to combat inflation, deflation is coming, so we better pause, let the previous rate hikes work their way through the economy, before doing anything else.’

Soon after the Fed Heads will turn around and cut rates, print currency, and start the whole shootin’ match over again. They still don’t believe that their easy money, and currency printing had anything to do with our inflation mess!

Bottom line, they will attempt to get the economy going and the mess will eventually get bigger –

Dennis they call that “stagflation.” Basically, it’s the Fed trying to burn the candle at both ends and making things worse.”

Stagflation is a combination of inflation and a stagnant economy. It brings the worst of both elements.

A stagnant economy means business and the stock market decline; people are worried about losing their jobs. Companies may be forced to cut their dividends and could go out of business.

Meanwhile, inflationary price increases continue, and people will cut back on spending, furthering the business slowdown.

Prices are rising and your income is not keeping up. Retirees are not exempt; their investment income can also be threatened – the fears about running out of money before they die are real!

The Washington Posts tells us:

“The World Bank on Tuesday warned that those forces, called ‘stagflation,’ could induce years’ worth of struggles.

…. Stagflation is also hard to fix. The job largely falls to central bankers such as the Federal Reserve, which exists to ensure a stable economy.

Let’s be clear. Inflation is caused by the Fed and the government. To tame inflation they must reverse course which also has a negative impact on the market. The fix is to finish the job properly; stagflation will occur if they don’t have the backbone to complete the job.

Friend Rich Checkan’s publication, “Always Something Interesting” offers some great advice. He gave me permission to share it with our readers:

Rich offers some great advice; hunker down! Good advice always. While the Fed may not have a backbone, we must. Just do it!

The NFL regular season started last weekend. For several decades I would watch games on Sunday, glued to the television. In the last few years, I have lost interest. I take issue with intertwining political messages with a sporting event. Sports has always been an escape for me, allowing me to get my mind off the problems of the day. I don’t need constant political reminders that just raise my blood pressure.

While I’m at it, the political ads this year are terrible. Most of them are negative and deceptive. The crap they are putting out about candidates on both sides of the aisle is junk. Their voting record and public statements sure conflict with the ads. We still have a month to go before the elections; expect it to get worse and even more vicious.

This week Jo and I are driving across the country. If you are on I-40 and see a maroon Honda Odyssey with Arizona plates, be sure to wave. We needed to take a lot of stuff to our Indiana home. I was hesitant to drive as we will be driving back in late December and the weather can make it very difficult.

“When your lover is your best friend, expect miracles.”