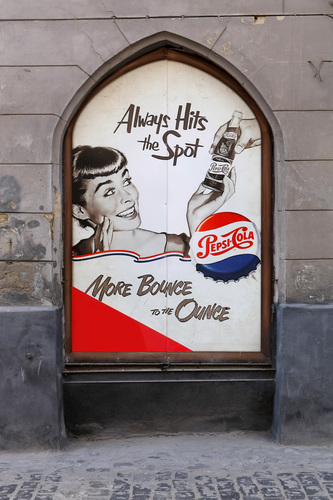 As a night school student, I was an accounting manager for a national company. I took a sick day and my punishment was a promotion to credit manager.

I hated it! The sales department wanted sales and my performance was based on minimizing credit losses. The tools I had to work with were archaic compared to today’s standards. My decisions were generally based on past history; trade association contacts and some customers submitted periodic financial statements.

My biggest credit loss came from an account where I thoroughly analyzed the customer financials. They appeared to have a solid growing business – yet they went bankrupt. How could that happen? I asked an association contact and he laughed. He said the owner was “a lying SOB” and the financial data I had was unaudited, falsified information.

I learned a valuable lesson. Financial data should not be automatically trusted no matter how official it may look. Remember the old saying, “Figures don’t lie, but liars can figure”.

Why I hate Wall Street

The tainted financial data I received was to hoodwink creditors. Today, executives of major corporations are massaging the financial data to hoodwink their owners; people like you and me who have invested our hard earned money in their company. The headline data that is touted by the company and mainstream press must always be looked at with suspicion.

Why? Top management’s compensation is based on certain parameters. They will massage the data to make sure they maximize their personal compensation, even at the expense of doing their company long-term harm.

I am going to use Pepsi as an example. They are simply one lemming among thousands; all marching to the same tune. They obscure the facts and justify their behavior because everybody does it.

I have always been a Pepsi fan. Perhaps it was because of this 1940’s catchy jingle that every kid could sing word for word:

“Pepsi-Cola hits the spot, twelve full ounces, that’s a lot, twice as much for a nickel too. Pepsi-Cola is the drink for you.”

Pepsi has always tried to appeal to a younger crowd. This appeared on their company website when they released their last earnings announcement. 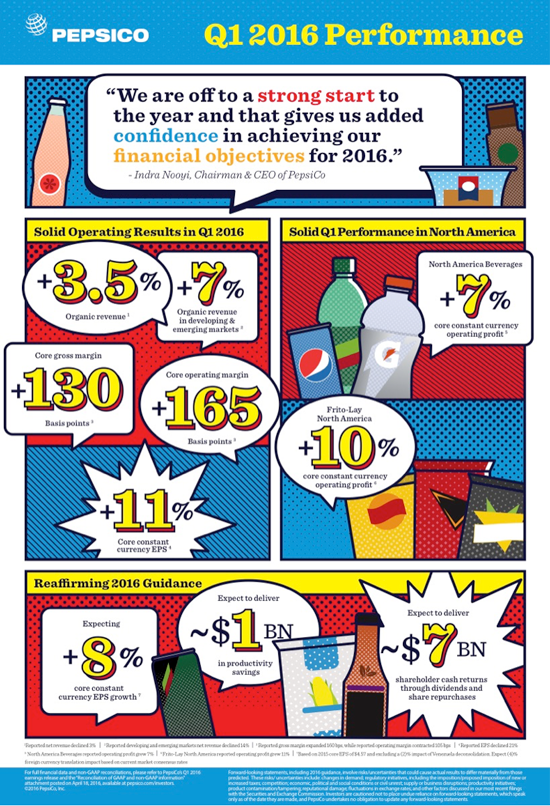 Following are comments from PepsiCo Chairman Indra Nooyi in their webcast.

…. We have performed well because our approach to operating in this environment is and has been to execute well against what we can control and to retool our business models and operating system to cope with what we believe could be sustained volatility and uncertainty. And this is really what we’re doing.”

Every number in their clever graphic and webcast is massaged to make management look good and encourage investors to buy their stock. A prudent investor is skeptical and seeks trusted sources for information.

Looking behind the curtain

Their official earnings announcement is full of legal mumbo-jumbo, footnotes, and unexplained acronyms, creating more distrust. Here are some examples:

If you want more mumbo-jumbo you can go to their unaudited five page Reconciliation of GAAP and Non-GAAP Information. GAAP = Generally Accepted Accounting Principles. Nothing here builds trust and confidence.

All I want is the truth in plain understandable English. I looked to Marketwatch to decode the data.

My broker gives PepsiCo an A rating, meaning it will strongly outperform the market. Are they “less bad” than the rest of the market? I found a paid investing service that said PepsiCo’s stock price is overvalued by 45.44%. Who should you trust?

GAAP vs. non-GAAP adjustments.
Most of this is done to obscure the truth, or for tax reasons. Look at the real numbers. I found one example while pouring over the data. PepsiCo reported:

“In the 12 weeks ended March 19, 2016 we recognized $46 million of mark-to-market net gains on commodity hedges… These gains and losses are subsequently reflected in division results when the divisions recognize the cost of the underlying commodity in operating profit.”

What does that mean? As a cash basis taxpayer my profit arrived when my client’s check cleared the bank. The commodity gains might look good on paper, but you don’t capture your profit until you sell them.

Beware of the EPS (Earnings Per Share) game. EPS is a commonly used metric – taking the earnings for the period and dividing it by the numbers of shares outstanding. This metric should be suspect because it is generally used to determine executive bonuses. Manipulating EPS has become a creative art form designed to deceive.

In today’s economy many companies cannot improve their EPS by increasing earnings. Instead they are reducing the number of shares outstanding.

Recently I wrote about how this creates the illusion of improved performance. Prudent management borrows money to invest and earn more profit. Buying back company stock when it is at an all time high is short-term thinking with negative long-term implications.

In the last ten years PepsiCo has gone from 1.69 billion shares outstanding to 1.49 billion. Pepsi’s non-GAAP 1st quarter EPS was $.89 versus $.83 in 2015. The 2015 GAAP EPS numbers came in as $.64 versus $.81. Their EPS would have been around 11% lower had they not bought back 200 million shares in the open market. Pepsi reports lower earnings, while buying back high-priced shares with borrowed money. That breeds confidence?

Having one owner or 1.49B owners is irrelevant. Management should be evaluated by how the company performs in the competitive marketplace. Being deceitful should cause their compensation to go down, not up!

Pepsi is not alone. Former advisor to the Federal Reserve Bank of Dallas, Danielle DiMartino Booth tells us:

“For seven straight quarters, over 20 percent of the companies in the S&P 500 have reduced their year-over-year share count by at least four percent, which conveniently translates into at least a four percent pop in their per share earnings. Ain’t math grand!”

Beating earnings estimates. The company, working with analysts, makes a prediction for their next earnings announcement. The trick is to estimate low. When earnings are announced Wall Street trumpets, “They beat the estimates!” Lousy companies can beat the estimates, “Hooray, they did not lose as much as we expected!” Never take this metric at face value, always look behind the curtain.

What can retail investors do?

By the time I was in grade school, like young boys do, we reworded the Pepsi jingle:

“Pepsi-Cola hits the spot, specially when you’re on the pot. Press the button, pull the chain, there goes Pepsi down the drain.”

While Pepsi is far from bankrupt, their earnings are decreasing. Boomers and retirees cannot afford to be fooled and let their life savings go down the drain. Investors must demand that Pepsi, and every company listed on an exchange just tell the truth to your owners and potential investors – don’t try to sugar coat it.

In the meantime, put yourself well ahead of the crowd – spend an hour or so educating yourself about an investment candidate before you buy. Look behind the curtain when their earnings are announced. Building a list of trusted research sources will save you time and money. “Trust but verify” not only applies to nuclear arms treaties; but also looking at data before investing your hard earned money.

On The Lighter Side…

You know summer in the Midwest is just around the corner when you watch the Cubs and see the ivy on the outfield wall start turning green.

Every baseball fan knows exactly where we were when this photo was taken. 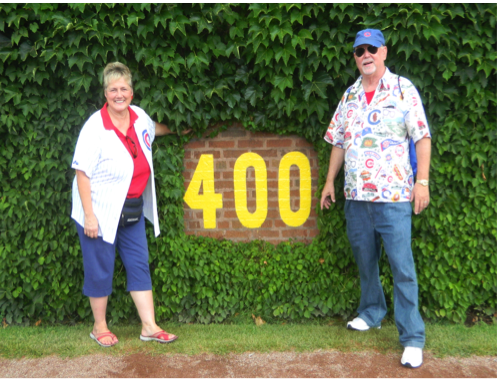 We are really looking forward to our midwestern summer. Instead of going to Cub games, much of our time will be spent watching our two grandsons, Brock and Braidyn play baseball. Win or lose, the beauty of sports to me is that it’s multi-generational. This is the most fun article I have ever written about baseball.

Here are some more quotes attributed to Albert Einstein:

As long as I’m discussing baseball: