Politicians Should Not Be Allowed To Run For Public Office 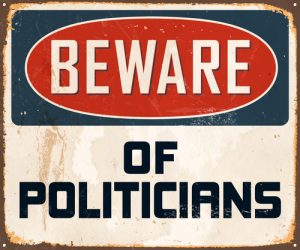 What is it about elected office that causes smart people, many with good intentions, to turn into absolute morons? Their decision-making logic is totally focused on reelection instead of doing what is right. Many times their illogical decisions harm the people they are supposed to protect.

Each week I go through a large reading pile looking for ideas to write about. I scrawled “DUMB” across today’s selection.

I recently lambasted Wells Fargo about its corruption. They were fined $185 million for opening fake accounts. The executive who headed the crime unit quickly retired with a $125 million bonus. Their CEO, John Stumpf resigned. Wells Fargo is receiving well-deserved public backlash.

Predictably, opportunistic politicians jump on the bandwagon with some questionable decisions.

“Illinois Treasurer Michael Frerichs said Monday his office is suspending its annual $30 billion in investment activity with Wells Fargo for at least one year. The office oversees more than $1 trillion in transactions annually, Frerichs says, and Wells Fargo stands to lose “millions of dollars” in investment fees from the action.”

Not to be outdone, Bloomberg tells us California Suspends ‘Business Relationships’ with Wells Fargo:

The suspension, in effect immediately, will remain in place for 12 months. A “permanent severance” will occur if the bank doesn’t change its practices, State Treasurer John Chiang said Wednesday.

… Chiang, a Democrat who’s running for governor in 2018, (Emphasis mine) oversees about $2 trillion in banking transactions a year and manages a $75 billion investment pool that includes $800 million in Wells Fargo securities.”

I am all for punishing the crooks – with some provisions.

Let’s see how the punishment stacks up against the criteria.

Will the punishment deter the criminal from being a repeat offender? In 2015 Wells Fargo employed approximately 265,000 people and currently holds $1.9 trillion in assets.

The punishment will hurt bank profits. Some people will lose their jobs and others may not get a raise.

Mr. Chiang proudly said he controls $800 million in securities and Wells Fargo made $1.7 million from underwriting three bond deals. Illinois suspended $30 billion, both totaling about 1-1/2% of the banks total assets.

Will the punishment cause collateral damage? The population of Chandler, AZ, is also approximately 265,000. If a crime ring is discovered in Chandler, should you punish the entire town? The punishment will hurt a lot of innocent people, while the ringleaders get off with a slap on the wrist.

Don’t think it can’t happen. In the 1990’s California enacted several draconian laws directed at those who owned motor homes. Campers by the thousands boycotted California choosing to spend their vacation where they were welcome. California campgrounds lost millions of dollars in revenue.

Fleetwood Industries was the largest motor home manufacturer in the world; headquartered in California, and one of the state’s largest employers. It took them threatening to leave, and take several thousand jobs with them, before the laws were changed.

Verdict: yes a lot of innocent people can be hurt by the decision.

Will the punishment deter others? The top five banks control $7 trillion in assets, 45% of the industry total. By late 2015, those banks were collectively fined $205 billion for criminal misdeeds. Isn’t moving money out of Wells Fargo punishing one crooked enterprise and rewarding another?

While the numbers appear big in a press release, in the big-boy banking world they are peanuts. As my Marine Corps drill instructor used to say, “That’s about as insignificant as a pimple on a gnat’s butt!”

Verdict: It will not deter other banks from committing crimes

Can the motives of the person administrating the punishment be questioned?

The motives of every politician should be questioned. Illinois gets extra scrutiny. I’m sure it is coincidental that both treasurers’ terms expire soon.

The CA treasurer is running for governor in 2018. The Illinois treasurer was first elected in 2000 and has moved up the ladder ever since. It appears that he has a bright political future.

I do not know either of these gentlemen. Their motives may be as pure as Mother Theresa. I hope so and tip my hat if that is the case. The next few paragraphs are nothing personal against either of them.

Other banks will be competing for the business that is now up for grabs. A year from now, when the suspension is reviewed, fierce competition will open up again, with Wells Fargo now in the mix. Wells Fargo wants to publicize that Illinois and California has given them a clean bill of health and they are now back to doing business as usual.

This is a dream come true for a “Pay to Play” politician. When Barack Obama was elected, Illinois Governor Rod Blagojevich solicited bribes, attempting to sell the senate appointment to the highest bidder. He was impeached, convicted, and sent to federal prison. He is the fourth Illinois governor to serve jail time.

A lifelong friend, a career employee of the State of Illinois, described this as “business as usual”.

Will the treasurers administrating the punishment take advantage of the situation to solicit campaign donations or personally benefit? I have no idea, and certainly hope they do not. But that was not the question. Can the motives of the person administering the punishment come into question?

Verdict: darn right and they should be thoroughly scrutinized.

Why do I take such a harsh position?

Effective decision-making involves looking at the effects of your decisions; sometimes they cause bigger problems.

Their decisions may hurt a lot of innocent people who not only work for Wells Fargo, but also retirees and pensions that have invested in their stocks and bonds. Shouldn’t politicians be focusing on creating jobs, not destroying them?

The right solution to the problem, which would give positive thumbs up to all four criteria, is simple.

Stumpf will not receive any severance pay, the company said. But he will walk away with stock and retirement benefits worth an estimated $134 million, according to executive-pay firm Equilar.”

Yes, you got it right. Stumpf, age 63, gets early retirement and takes hundreds of millions with him – and they call it punishment. (Wink! wink!)

While I am no fan of Wells Fargo, I’m also not a fan of grandstanding politicians. They both look like typical politicians, all talk and nothing gets done that will cause corrupt banks to change their behavior. The political saying, “Never let a good crisis go to waste” is not funny. They took a problem and found a way to use it for their personal benefit; with the potential of causing harm to innocent people.

If they want to get some real national recognition that could propel them to higher office then take the crooks to court! Even if they were not convicted, it would serve as a strong deterrent for Wells Fargo and other banks. It would not hurt innocent people in the process.

What is it about politicians? They are more interested in political grandstanding and reelection than they are about doing what is right.

I rest my case!

I have a housekeeping issue.

Three subscribers to our Miller, On The Money Annuity Guide contacted us saying their Guide has not arrived. I realized we missed something. The Guide is an electronic publication (PDF) available for download. Adding printing, shipping and handling to the cost doesn’t make sense for a 60 page Guide.

If you have ordered and not received your guide, please contact me, dennis@milleronthemoney.com and we will get it to you immediately. We have gone back and reworded things to make it clear. Thanks again for the feedback, it is much appreciated.

I am probably old-fashioned but I thought elections were supposed to be a battle of ideas. The candidates put forth their ideas and vision for the future. Voters choose the one they feel most comfortable with.

I ask this of both presidential candidates. If your ideas are so damn good, why do you feel the need to rig primaries, debates, make up stuff about your political opponent, make unfounded allegations and tear each other down personally? Can’t we once have an honest debate about illegal immigration, the economy, creating good jobs and solving crime? I’m sick and tired of the crap that always seems to go on the last month before election.

I’m becoming a fan of Home and Garden Channel; my guess is they are enjoying good ratings. Geesh!

Good friend Toots H. sends along some cute sayings for our pleasure:

And I will add one I have pondered for years.