Are precious metals about to shine again? 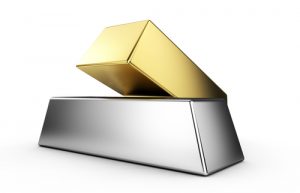 My wife Jo has her wedding ring inspected as part of their warranty program. The jeweler was examining her ring when a group of young folks came into the store. They were part of a church youth group on a modern-day scavenger hunt. They politely asked permission to take a photo of the most expensive piece of jewelry in the store.

I tagged along. Despite dozens of items in the showcase, this particular one sparkled brightly and was easily spotted. I mentioned it to the clerk and she said the new LED lights can really make gold, silver, and platinum look very attractive.

That sounded familiar. I recently interviewed good friend Chuck Butler about rising interest rates and their potential for inflation. Chuck also highlighted the shiny metals, recommending investors increase their holdings to 20-25%. Chuck’s interview was followed by this article where Fed chairman Jerome Powell reinforces the premise. Central banks worldwide are unloading debt and interest rates are expected to rapidly rise. Metals should be back in the spotlight.

Some positive news about metals

Deutsche Bank, UBS, and HSBC all admitted to price manipulation in the futures markets. Not only were they fined, the traders may also be facing criminal charges.

There’s been a tremendous amount of evidence presented over the years alleging that the gold and silver markets were being manipulated, but this is the first time I recall anyone actually facing serious consequences.

My go-to expert on these issues is Ed Steer. Each day he publishes his Gold and Silver Digest – one of my “must read” publications. When it comes to precious metals, and the issue of manipulated markets, Ed is a true expert.

Ed is a member of the Gold Anti-Trust Action Committee (GATA). For good reason, they have been educating the public and hammering the government with some damning evidence of anti-trust violations. I’ve known Ed from his days when he wrote a daily column for Casey Research. He is a straight-shooter who tells it like it is. Ed was kind enough to set aside some time for an interview.

DENNIS: On behalf of our readers, Ed thanks for your time. Let’s get right to it.

When I first started writing for Casey Research, GATA was supplying a preponderance of evidence of price manipulation in the gold and silver market. Many made light of the accusations. To all of your credit, you were not deterred, despite the criticism.

I enjoyed the article on the website quoting industry expert, Eric Sprott.

“….(T)he U.S. Commodity Futures Trading Commission’s fining last week of three European bullion banks for gold and silver market manipulation since 2008 vindicates GATA and others who have complained about such manipulation.”

I feared this was going to be like the banks, slap on the wrist fines and no one being personally held accountable. I see there is a real possibility of criminal prosecution of the traders manipulating the market. I know you are well aware of all that is going on.

What’s your answer to the Goldcore.com question, “Gold Bullion Price Suppression to End?”

ED: Dennis, thanks for inviting me.

The suppression scheme will end when the ring-leader, JPMorgan, decides…or is told to stand aside and stop shorting precious metal prices in the COMEX futures market, which is the venue being used to keep precious metals prices suppressed.

These fines and “possible criminal prosecutions” are OK, but miss the mark, as the real criminal activity involves the CME Group and JPMorgan, plus a handful of other bullion banks. Once these lawsuits center on those two institutions, it would all be over pretty quick.

DENNIS: I’ve recently written about interest rates rising, potentially causing inflation. Many pundits are suggesting it’s time to shine the spotlight back on metals. Do you agree with the pundits who are recommending investors increase their holdings to 20-25% or more of their portfolio?

ED: If there ever was a time to be overweight in precious metal, this would certainly be one of them…both the physical metal and the shares of companies that mine them. I’m 100 percent invested in precious metals – but wouldn’t recommend that investment strategy to anyone else.

DENNIS: I’ve had readers ask me why they should buy gold when they believe the market is being manipulated; they fear the playing field is not level. I feel we are headed toward inflation and we better protect ourselves with assets that hold their value.

What do you say to those who ask about buying metals, with full understanding the market may be manipulated?

ED: All price management schemes come to an end sooner or later. Either by the law of supply and demand or those who are managing the prices voluntarily back away from being the short sellers of first and last resort in the COMEX futures market.

This market management has been going on for a couple of generations – and is getting very long in the tooth, as it is now common knowledge that precious metal prices are being actively suppressed. It is certainly widely known in the precious metal arena, both by the producers themselves – and the current crop of investors.

Even nation states are wise to it all – as Russia and China have known about this for over a decade now – and have been increasing their gold [and now silver] reserves at a blistering pace. If they’re doing it…so should you.

I agree with you, and would never suggest our readers invest as heavily as you are personally – however, we’re still a long way from reaching the peak set in 2011, (particularly when you factor in real inflation).

You have written many times about how JP Morgan and other bullion banks have driven the prices down and accumulated millions of ounces in their own coffers. Wouldn’t it be to their advantage to have the price rise, they would make many billions once the lid comes off?

ED: Yes, that would certainly be the case. But as far as the timing is concerned, that is the big unknown – and it will be on their timetable, not on what we wish or hope for. All we can do is continue to wait it out.

DENNIS: One final question. We have been anticipating the inevitable crash for several years – not knowing when it will occur. The Federal Reserve and other central banks are no longer buying bonds; they are selling them which should cause quite a jump in interest rates – with high inflation possibly following. In your opinion, are we getting closer to the “Minsky Moment” our mutual friend Chuck Butler talks about?

ED: We’ve been there since the crash of 1987. It’s only been through the largess of the Federal Reserve and the other central banks of the world, that this paper Ponzi scheme in stocks, bonds, currencies, real estate, etc. have continued.

Every time any of these markets have shown signs of seeking their “intrinsic values”, the central banks are there with all the necessary liquidity to prevent the “Minsky Moment” you’re referring to.

Is it at hand now? It appears that way, but it remains to be seen what the central bankers do now that they’re back at the brink once again. But at some point, what they do or don’t do, won’t matter – and when that day comes…look out below.

DENNIS: Ed, on behalf of our readers, thanks again for giving us your time for our benefit.

Dennis here again. I enjoy reading Ed’s Gold and Silver Digest because of his no-nonsense approach. (Disclosure: I have no financial arrangement with Ed. I’m happy to promote his letter in return for him freely giving his time to help our readers.)

There’s a new sheriff in town. Just prior to President Trump’s inauguration, a bill to audit the fed was voted down in Congress. The Daily Signal told us:

“Legislation that would have given Congress the authority to audit the Federal Reserve was blocked…in the Senate. The bill fell seven votes shy of clearing the 60-vote threshold needed to advance out of the chamber. The vote was 53-44.

If passed, the legislation would have expanded oversight over the central bank and, for the first time, empowered the Government Accountability Office to audit the institution.”

While no one knows what will happen down the road, we have a new Fed chairman, and several current members of the Fed are stepping down. Auditing the Fed would dramatically affect all the major banks in the country. Former Fed chair Janet Yellen vehemently fought against being audited…who knows what all they are hiding?

Fasten your seat belts! A lot of things are a-changing…. 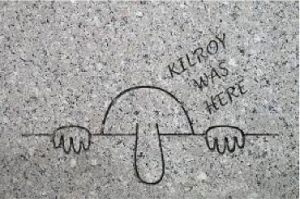 How many of you remember seeing the “Kilroy was here” images all over the place when you were kids?

I confess to having drawn a few of the images when I was a kid, having no idea what it was all about.

Good friend Henry M. sent along a very interesting article, “Kilroy Was Here” – A Story from World War II. It’s a short read and another part of the history of our country. I hope there is a shrine or plaque in his honor somewhere… 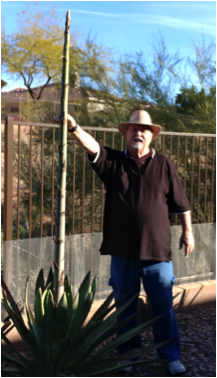 A few weeks ago, I ran a photo of a plant in our cactus garden that has sprouted a center stalk. It’s been growing at least a foot a week.

We were sorry to learn that the growth of the center stalk means the plant is soon to die and go to the great nursery in the sky. It’s pointed in the right direction.

I’m 6 feet tall, and it towers over me. While the stalk feels very solid, (I stuck my finger on a thorn) the bottom leaves are starting to turn brown – we’re not sure how much longer it will live. It’s one of nature’s lessons that reminds me I still have much to learn. Life goes on!

Friend Snow C. sent this along. For those of us who remember Kilroy: 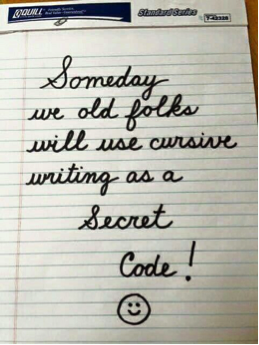