Do You Really Want to Retire? 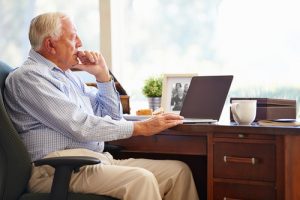 Do you really want to retire? You may give up more than you realize.

I was on the verge of tears when I called Amy 30 minutes before I was supposed to pick her up for our first date. My parents broke their promise and said I couldn’t use the car; I had no wheels!

Amy (fictitious name) was a pretty freshman girl who sat behind me in study hall. It took weeks to get up the courage to ask her out. I was humiliated; I was going to be the laughing stock of the school.

That traumatic event of 60 years ago changed my life. I swore I would never do that to my children. In a few short minutes I discovered the need for financial and emotional independence that’s never gone away. Ten days out of high school I was on a train to Marine Corps boot camp. I never looked back!

That drive to become independent was a heck of a motivator. It never went away.

The Allianz Life survey that reported, “A surprising 61% of all respondents said they were more afraid of outliving their assets than they were of dying,” makes perfect sense to me. Running out of money means giving up your independence.

No one wants to end up elderly, broke, hungry and humiliated. I’ve been captain of my own ship for decades. I’m with the 61% who feel losing one’s independence is terrifying!

When my dad was 90 I realized his vision was awful. I took no joy in taking away his car keys. He had a fender-bender near a grade school; that was warning enough. He went into an assisted living facility and was never the same.

People are catching on to the myth

All of the retirement savings plans, coupled with their lofty projections, are not coming true for many baby boomers. Safe investments with solid returns, which we thought we could count on, are long gone. Many retirees cringe every month as they dip into the principle to pay the bills.

A recent Bankrate retirement survey concludes, “70% will work as long as they can.”

The harsh realities of today’s economic world are sinking in.

The Bankrate survey correlates with the recent “Retirement Confidence Survey” (RCS) by the Employee Benefit Research Institute (EBRI), “The percentage of workers planning to work for pay in retirement now stands at 67 percent …”

Unfortunately the EBRI reports that many of those 67% planning on working are in for a rude awakening. Only 27% of retirees reported working for pay after retirement:

“In another expectations gap, the RCS has consistently found that workers are far more likely to expect to work for pay in retirement than retirees are to have actually worked.

One reason for the gap … is that many Americans find themselves retiring unexpectedly. The RCS has consistently found that a large percentage of retirees leave the workforce earlier than planned (46 percent in 2016).

Many … cite hardships … including health problems or disability (55%), changes at their company, such as downsizing or closure (24%), and having to care for a spouse or another family member (17%). Others say changes in the skills required for their job (12%) or other work-related reasons (21%) played a role.”

Many were forced out of the workplace due to issues over which they had no control. No one knows what the future will bring.

With the government’s current deficit spending, can we really count on Social Security as we know it today? Might the government cut benefits or try to inflate their way out of debt curtailing our buying power? We have no control over the events; however there are plenty of things we can do to minimize the impact.

Downsize and get out of debt. While we may hope to continue to work, the RCS survey makes it clear there are no guarantees. The sooner you begin to reduce debt and live below your means, the easier it is. Start now!

Plan for an encore career, just in case. If you are going to continue to work, you want to be in the group that loves their job. Who needs to spend their golden years stressed out in a job they hate? Start planning now!

What do you enjoy? Many encore careers tie back to their full time career. I have friends who work as a pharmacist, mortgage underwriter, computer consultant, sales representative, technical writer and industry consultant. Many companies recognize the value of that experience and put it to good use. It’s a win for both employer and employee.

Find a comfortable environment. Those who LOVE their jobs say they are enjoying flexible hours, love their boss and co-workers, feel they are treated fairly and are just having fun. It makes no difference if they are working at McDonalds, or a high tech consulting firm. If you can’t describe your encore career as a labor of love, keep looking.

Start your own business. Owning your own post retirement business can be a lot of fun; providing it is something you enjoy and know something about. On the reverse side, investing your retirement nest egg in a business you know nothing about is very risky.

If you are not sure, try to work part time in the field before you retire. Find out what the business is all about and if you like it. Go through much of your learning curve on someone else’s investment.

Turn hobbies into income. Many self-employed semi-retirees turned their hobbies into encore careers. A great example is Dick Karl, a very successful surgeon who became a charter pilot, and now an editor for Flying magazine.

I recall a husband and wife team who were both pilots. Their encore career is delivering airplanes for a local dealer. All expenses paid, and they take their time coming home. He sent me photos out his hotel window in the Bahamas.

A gardening lover friend has a terrific business selling herbs at farmer’s markets. Artists, writers, music teachers, photographers, cooking, and crafts can be a great source of income.

Find something different that is fun. Some encore careers are totally unrelated to the first career. I’ve met husband and wife teams who deliver motor homes, towing their car behind.

One driving friend has a company that drives cars between dealerships when they swap cars. Another is now a manager at a limousine company serving a local airport.

70% of the respondents anticipate working past their normal retirement age. Start planning now. Talk with people doing what you THINK you may enjoy. Perhaps you can start part time now to see how you like it.

Almost half of the retirees left the workforce earlier than they anticipated. When you retire, you want to go to something you enjoy and are looking forward to. You don’t want to retire from something and then set about finding a job.

When I retired in 2005, if you told me ten years later I would be writing a weekly column for my own free website, I would have laughed at you.

Our website is growing and I hope someday to make a small profit. My wife Jo and I quickly realized one hidden benefit of an encore career is fostering a sense of self worth. We love the emails from readers; many get printed out and put on Jo’s desk. Jo is my #1 proofreader and critic. If she doesn’t like a draft, it doesn’t get published. The feeling of being a contributing member of society keeps us both young and active.

An encore career helps us feel young, active, productive, alive and independent. Why would anyone ever want to give that up? Retire on your own terms!

Jo does more of the driving than in past years, but I still have my car keys and plan to keep them as long as I can.

I want to again say Thank You to the many readers who purchased our recent Miller On The Money Annuity Guide. I want to remind readers it’s being offered at a 36% discounted price of $19. The offer expires tomorrow night, September 30th. Click HERE to order now before the deadline.

I am not going to go through the pitch again; however I can say the feedback has been terrific.

These remarks are being written in advance as Jo and I are headed for a four-day mini vacation in Pinetop, AZ. We have our camera in hand and are headed to the mountains. When Jo saw the weather forecast her first comment was she was going to have to pack real shoes, flip-flops won’t cut it.

We don’t plan on racing home to catch the presidential debate!

DON’T STICK YOUR ELBOW
OUT SO FAR
IT MAY GO HOME
IN ANOTHER CAR.
Burma Shave

DROVE TOO LONG
DRIVER SNOOZING
WHAT HAPPENED NEXT
IS NOT AMUSING.
Burma Shave

Where have I heard this one before?