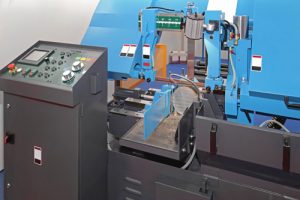 Are robots a threat to our society? Can they take away our jobs, or manage our retirement nest egg safely? How will people earn money to buy goods?

In the early 1960’s I had the privilege of working for Leighton Wilkie, a lesser-known captain of industry. He and his brother invented the band saw and built a good size empire.

I was the youngest kid in the office when his secretary asked if I would “mind” driving Mr. Wilkie downtown. He had an important appointment and needed to review his notes.

On the way home he asked me dozens of questions. I must have done OK because I ended up doing many “special projects” for him. I cherished the time I spent with him.

His obituary in the New York Times was glowing:

“He sponsored educational exhibits in museums, including a “Civilization Through Tools” display and the Julius C. Wilkie Steamboat Museum in Winona, … featuring Robert Fulton documents and steam-driven equipment and plants.

Mr. Wilkie wrote books about machine tools and the industrial revolution. He was the co-author, with Richard S. Rimanoczy, of “The Principles of American Prosperity” (Devin-Adair, 1975).”

Mr. Wilkie and I regularly discussed how his company was part of the industrial revolution. They made machines for making bigger and better machines. He emphasized automobiles and planes are machines just like a washing machine. Reducing the cost of production made products affordable for the masses.

I asked him about the impact on jobs and reducing the need for labor. He reassured me that labor and human intelligence would always be necessary for manufacturing, operating and inventing the new machines and technology. In those days, the idea of “artificial intelligence” would have been considered science fiction.

A few decades later I acquired a technology account, Modicon. The company was a pioneer in the development of Programmable Logic Controllers (PLC). PLC’s become the “intelligence” in operating the machinery. Many times I would be in a production facility watching PLC’s operating machinery built by Mr. Wilkie’s company, thinking to myself just how amazed he would be with the continued progress.

Is it possible that “artificial intelligence” can replace human thought and judgment?

Michael Edesses recently wrote an article discussing Martin Ford’s book, “Rise of the Robots, Technology and the Threat of a Jobless Future.” He discussed robots replacing financial advisors. Could it really happen?

Artificial intelligence is now a major part of the stock market. A recent Investopedia article, “The Power Of Program Trades” tells us:

“Every day on Wall Street computers buy and sell large blocks of stock with nothing more than a couple programming rules and an algorithm to provide direction. These trades, called program trades, take place behind the scenes, oblivious to the chaos of the trading floor. However, savvy investors would be foolish to ignore a system that produces an average of 30% of the daily trading volume on the New York Stock Exchange (NYSE).

…Computers do the work. In general terms, program trading is large-volume trading made by systems, usually automated, based on an underlying program or idea.”

Today, online brokers also offer programs for individual investors. Following is an example of a promotion for this type computer program:

In contrast with automated systems that execute trade orders once, our robotic stock trading software is capable of executing a user-defined trading strategy continuously and instantaneously without user intervention.

…The ability to trade in “stealth mode” is also a key distinction between automated and robotic trading systems. As the computerized stealth-based robot is able to detect conditions before a human trader can, robotic stock trading has become increasingly popular with the general public as this technology allows the users to rely on speed of execution to repeatedly take profit on stock fluctuations throughout a trading session.”

I am not endorsing this company, nor am I comfortable with the idea of retirees turning over their entire nest egg to an automated system. Retirees should not be actively trading trying to make fractional profits on hundreds, if not thousands of trades each day.

David Holland, CFP, CPA and I recently discussed the role of robo-advisors in making investment decisions. David tells us:

“A lot of noise has been made in the financial industry about “robo-advisers” and their low-cost ability to manage investment portfolios. Frankly, I think it is way overblown. My firm uses a “robot” or software to run investment reports and to assist us in allocating our clients’ investment accounts, but the software doesn’t do this on its own. We also don’t allow the “robot” to automatically re-balance portfolios on their own. Judgment is required. Human judgment.

One of the most advanced computing systems on the planet is IBM’s Watson. I hear it is “smart” and has a growing “artificial intelligence.” That’s great. I’m sure it could beat me on Jeopardy! It’d be a different story, however, when it comes to personalized financial planning… a well-trained human with ears, eyes and a heightened understanding of people, … interacting with clients is far superior to that of a robot.”

What about the future?

If there are no jobs, how do people get money to spend and survive? Robots will handle many routine jobs. Amazon built a huge, automated facility in Lakeland, Florida. It takes a mere handful of people to run it. It’s clear that the labor force of the industrial revolution has radically changed.

The Michael Edesses article tells us:

“Ford suggests that a basic income guarantee (BIG) for all citizens may be necessary. Ford proposes as justification for that basic guarantee that taxpayer money has funded much of the basic research that allowed the development of information technology.”

What a crock! Research capital should be provided by the private sector, not the government. The free market should determine the winners and losers. We don’t need any more tax dollars wasted on Solyndra scandals. If the bulk of the population does not work and receives government handouts, why would anyone work? There is something radically wrong with this picture.

Will the only workers be government workers (an oxymoron for sure)? Will it be possible to heavily tax the small working class and the billionaires who are founders of the technology companies to pay for the handouts? While the world will be continually changing, Ford’s scenario reminds me of George Orwell’s book, “Animal Farm”. I have higher hopes and expectations for future generations.

Education is a continuous process. Young people will be challenged to keep up with the rapid changes in technology. Robots coupled with artificial intelligence may change the world. I agree with Mr. Wilkie, society will still require intelligent, productive human beings to run, maintain and innovate these machines and robots. Those who are able to keep up will always be in demand.

Expect turmoil. Robotics will affect labor unions, business and government. When times get tough, politicos resort to extreme measures to prevent the masses from storming the castle. A four-day workweek would certainly be popular. Will society clearly divide into a working class and welfare class? Be vigilant, don’t get blindsided like we were in 2008 with the bank bailout.

Understand the reality of the market system. Don’t try to beat the robo-traders on their turf. The MarketWatch article, “Record margin debt may be a red flag, but analysts say don’t worry” tells us:

…Following a period with a record margin debt, there is a 61.9% chance that the S&P 500 will be higher three months hence … Six months from … a record, the market has a 64.4% chance of being higher … Looking out over a year, the market is positive 63.1% of the time following a record …”

The stock market is on thin ice. Many foolishly believe they can get out just in the nick of time, ahead of everyone else. Don’t think you can beat the programmed traders on their turf. The big boys with automated trading platforms dealing in nanoseconds, and larger accounts in the brokerage houses will be at the head of the line. Individual investors, trying to time the market are highly vulnerable.

Protecting your nest egg is investing – not trading. Locking in profits is always good. It’s better to take profits a year early than selling a minute too late! Keep your stop losses up to date, stay on top of current events. I agree with David Holland when he says the best system is using all the tools available, coupled with human judgment. There is no substitute for common sense.

I bought Jo a Robotic Vacuum Cleaner and she loves it. While it saves a lot of time, she still gives the floor her “touch” particularly in the corners. Better robots and humans should work together in harmony!

Until recently, if you want to destroy a perfectly good piece of meat, ask me to cook it on the grill. Burgers, in particular, would come off with the appearance and consistency of a hockey puck. Outdoor cooking is a skill I never learned.

We just upgraded our back yard, including a new gas grill. Encouraging friends, coupled with a lot of great videos on You Tube, have helped me overcome my fears of being embarrassed. After a little practice, burgers, steaks and sausage have turned out to be doggone good! I watched videos last night on grilling chicken breasts; they are next on the docket.

Cooking and eating on the back patio is turning out to be a lot of fun.

If you haven’t done so, check out our most recent FREE report, “10 Things You Need To Know, That Brokers Won’t Tell You About Dividend Paying Stocks!”

I noticed Amazon just reduced the price 25% on the Robot Vacuum Cleaner. If you go through this LINK, you help us keep our website FREE. Thanks again to all the readers who are helping us out.

Friend Ed S. provides our humor for the week: 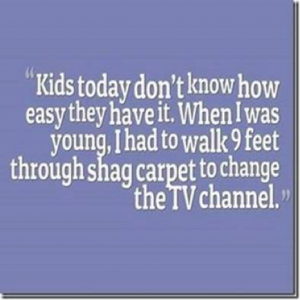