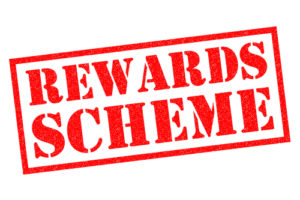 Consumers love rewards programs, whether it’s cash back, free miles or a free dessert at their local eatery. They’re generally a tit-for-tat, you do business with them and they reward you for doing so.

Subscriber Bob O. lamented how our government is borrowing billions and wasting it. He sent a study titled, “Where’s The Pork?” It reports on the $583 billion in government grants during the fiscal year 2016.

How ironic it is when the Wall Street Journal (WSJ) reported:

“The budget shortfall widened to $587 billion in the fiscal year that ended Sept. 30, the Treasury Department said Friday, up 34% from the previous fiscal year.”

Am I missing something? While the WSJ highlights increases in social programs as the primary cause; take away the government giveaways – the pork – wouldn’t we have balanced the budget?

The study provides 50 examples of wasteful federal grants. It reminds me of a rewards catalog; you redeem your political donations for certain gifts.

Wasteful spending is a bipartisan effort:

They provide an easy to read map pinpointing where the spending went: 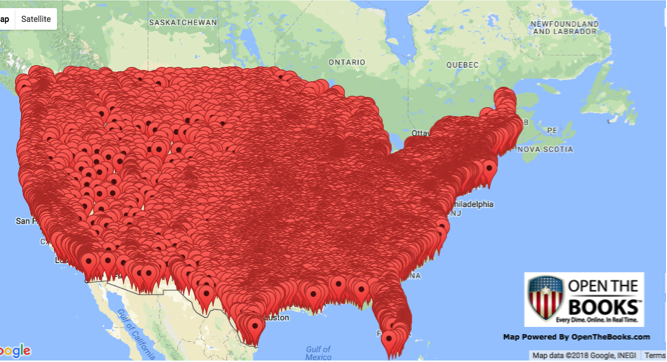 Yes, I sarcastically intended to show just how bipartisan government pork really is.

Who gets the free stuff?

The government rewards the swamp at almost double the rate of the next in line:

Private industry is also on the dole:

Here are some of the notorious highlights:

“A grant for more than $200,000 from HHS funded a new condom design to address a “lack of adequate lubrication,” currently a “universal drawback” in other condom designs.” ….

Can congressman Kennedy explain why it’s necessary to subsidize the private sector? Why not let the free market work it out? I’m sure there would be plenty of volunteers to help with the study.

“The California Prostitutes Education Project received $1.49 million from HHS in the fiscal year 2016. The project describes itself as a “youth-centered initiative” that “works with street prostitutes” to teach “safer sex and needle use” in a way that’s respectful of their clients’ “lifestyle and choices,” despite the fact that prostitution is illegal in California and 48 other U.S. states.” (Emphasis mine)

While politicos have been screwing taxpayers forever, when it comes to sex-ed, shouldn’t hookers be the teachers?

“The Shiloh Treatment Center – operating out of a mobile home in Manvel, Texas – has a long media-chronicled history of alleged abuse and negligence. …. Reports from children and investigators at these facilities have alleged physical and verbal abuse, neglect, and, on three occasions, death. The reoccurring allegations led the U.S. Representative from a neighboring Texas district – Sheila Jackson Lee (TX–18) – to publicly call on the center to close its doors.

“Nancy and I are humbled by the broad and deep support the people of the Greater Houston area continue to provide our campaign,” said Congressman Olson. “The folks of our area expect conservative reforms to change the course our nation has been on during the Obama-era. I’m honored so many have come together to ensure our campaign is fully capable of defending my conservative, results-oriented record ….” (Emphasis mine)

Huh? We have a child care facility in a house trailer with a history of real issues, including abuse. Over the last three years, Congressman Olson rewarded their mediocrity with $14.9 million. He’s running for reelection on a “conservative, results-oriented record.” What could possibly be wrong here?

“This $188,136 grant from HHS to the Research Triangle Institute supported HIV-prevention efforts among female sex workers in Zimbabwe. The project pertained specifically to an HIV-prevention project that targets young sex workers with a high risk of contracting HIV.”

“A $710,337 HHS grant to the University of North Carolina provided HIV testing kits to female sex workers in Kenya so they could administer tests to their potential sexual partners before engaging in unprotected intercourse.”

Here are some tidbits from the 30-year congressional veteran’s website:

“David has worked in Congress to promote the values and interests of central North Carolina residents.

David …. has made job creation his top priority.”

Now really congressman, African hookers? I’m sure you have plenty in NC. Shouldn’t you be protecting your own from HIV?

“This Columbus, Ohio, science and technology nonprofit does a great deal of business with the federal government, reaping $181.6 million in grants and $8.1 billion in contracts between 2014 and 2016. ….

In its most recent tax documents, Battelle disclosed total revenue of $4.8 billion, with more than $4.5 billion coming from government grants and contracts. The nonprofit also documented seven employees earning more than $1 million a year, including the CEO, who received $2.7 million in total compensation.”

While they may perform important services, is there any oversight? Wonder where their political donations go?

It’s all about who ya know!

Ever heard of Martha’s Vineyard? The Island is a summer colony for the rich and famous. It was a favorite destination of President Obama. Does Chappaquiddick Island ring a bell? 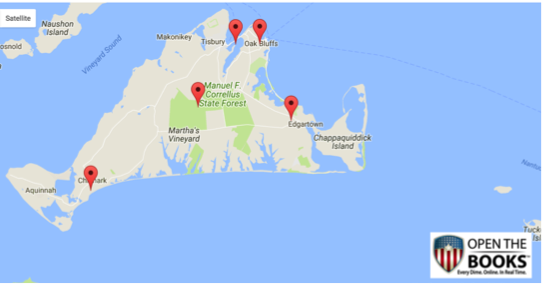 $9.2 million was granted for an “Airport Improvement Program”. The island boasts about 16,000 full-time residents. Instead of raising their taxes, it’s easier to make a phone call to the right politician and pay for the improvements with your taxes. It’s just a simple perk; part of being politically connected.

The swamp is bipartisan, 535 members of Congress gave away $583 billion in free stuff, only it’s not free!

I agree with Gary H. who writes, “Debt will be our demise….no way around this until we get a congress filled with fewer politicians…which seems almost impossible to imagine.”

States are pushing for a balanced budget amendment to the Constitution. In 2014 Newsmax reported, “34 States Call for Constitutional Convention – and Possible Rewrite”. While passing the 2/3 threshold, there are some technicalities:

“The resulting confusion and lack of clear guidance in the Constitution will have to be sorted out by the congressional leadership since Article 5 says that Congress “shall call a convention for proposing amendments” when requested by enough states.”

Apparently, this 2013 poll showing “85% of Americans Support Requiring a Balanced Federal Budget” is not enough to motivate our representatives in Washington. Whatever happened to representative government?

The pork spending report ends with this conclusion:

My positive side says that is a great start. Their findings should be broadcast around the world. Members of Congress should be publicly put on the spot and held accountable.

My cynical side worries about just how far the deep state will go trying to prevent them from shedding light on government waste.

When we arrived in Indiana in late May our daughter Holly took a photo of corn about 4″ high, just beginning to sprout. Several readers wrote about the old saying, “Knee high by the 4th of July”.

This photo was taken late afternoon, July 3rd. The top stalk was 110″ high. My grandson remarked, “Knee high to the Jolly Green Giant!”

The average growth was almost 18″ per week! Wow! It looks like a bumper crop in the Midwest this year so far. Farmers indeed are helping to feed the world. 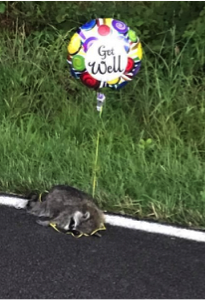 Living in farm country is much different than the suburbs and inner cities. When you see the signs “Watch for Deer”, it could easily mean cattle, horses, armadillos or any number of animals that might be trying to cross the road – particularly at night.

Sad to report, a family friend spotted a raccoon that didn’t make it… Someone with a strange sense of humor pulled over and attached a balloon to the poor critter. This photo is probably a once in a lifetime experience. It got a lot of comments when they posted it on Facebook.

As long as I’m complaining about the government, we will let friend Dennis A. provide a chuckle with his political truths: