Oh, what a tangled web we weave when
first we practice to deceive! 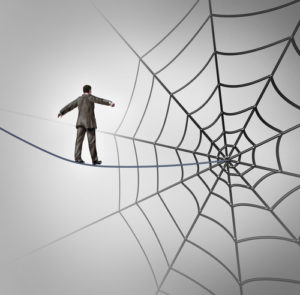 When I taught in night school my professor insisted I attend a full-day conference on “Effective Teaching Methods”. The speaker list was full of well accredited academics.

The morning consisted of 3-4 speakers outlining their intellectual theories. They rambled on, under the illusion the audience was enthralled with their brilliance.

The afternoon speaker told a story of a father and young son at a graduation ceremony. The boy looked at the program and asked, “What does BS, MS and PhD mean after their names?”

Dad thought for a moment and said,

Most of us roared with laughter as we stood and applauded, while others nervously shifted around in their seats.

Unfortunately, many investors must sort through too much BS that is attempting to deceive the public.

“We’re starting to learn what America’s biggest companies are doing with the huge windfalls from President Donald Trump’s tax cuts. And the answer is great for investors – but not so great for workers.

That’s because many companies are returning huge portions of their billions in tax savings to shareholders in the form of share buybacks and dividend increases – not necessarily new hiring and investment.”

“Right after the company tells the market that the stock is cheap,” …. executives overwhelmingly decide it’s time to sell.”

Buybacks have exploded this year thanks to Trump’s tax law, which lowered corporate tax rates and gave companies a break on returning foreign profits.

S&P 500 companies bought back a record $187.2 billion of stock during the first quarter ….

…. The tax law was supposed to encourage companies to spend on job-creating investments. But economists see little evidence so far that the tax overhaul has sparked an acceleration of investments in equipment, factories or other projects.

Jackson, who was appointed by Trump to fill a Democratic seat at the SEC, called on the agency to update its rules to limit executives from using buybacks to cash out.”

Is this a problem or political BS?

Scott A. Hedge, at the Tax Foundation offers a different perspective:

“Much has been made recently about the stock buybacks that companies have engaged in since the enactment of the Tax Cuts and Jobs Act (TCJA). To critics of the tax plan, stock buybacks are a sign that companies are not using the tax savings to either increase worker wages or to invest in new plants and equipment.

…. While the TCJA seems to have made stock buybacks a political issue, (Emphasis mine) little attention has been paid to whether companies are repurchasing more of their own stock today than in past years. That is why an article last week in The Wall Street Journal, “Record Buybacks Help Steady Wobbly Market” (under a paywall), caught my attention.

Despite the headline, the actual data contained in the chart accompanying the article shows that stock repurchases by S&P 500 firms in the first quarter of 2018 are on par with past peaks over the past six years.

We’ve re-created The Wall Street Journal chart in full, except that we adjusted the figures for inflation. 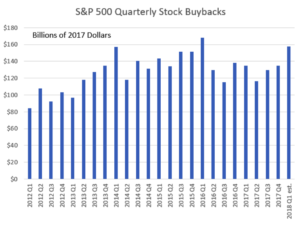 …. no matter how you look at the data it seems to show that the first quarter of 2018 is in no way an outlier when it comes to share repurchases by companies. What has changed is the political environment following the passage of the Tax Cuts and Jobs Act.” (Emphasis mine)

While I’m fed up with the political innuendos, I’ll leave the political debate to others. There is not much we can do about it anyway.

Here is a link to Commissioner Jackson’s talk:

“Basic corporate-finance theory (Emphasis mine) tells us that, when a company announces a stock buyback, it is announcing to the world that it thinks the stock is cheap. That announcement, and the firm’s open-market purchasing activity, often causes the company’s stock price to jump, so the SEC has adopted special rules to govern buybacks.”

The theory behind stock buybacks is the stock is cheap, however today stocks are being bought back for different reasons. Theory and practice are miles apart.

One former client had a rule; earn a minimum of 10% return on invested capital – 5% for dividends and 5% reinvested for growth.

For years it worked well. However, what happens when the business is no longer growing. What if they are not producing close to capacity?

When sales are flat, they may want to invest to improve operational efficiency and reduce their costs. Companies should not invest in their business if they see no real growth on the horizon.

Hewlett-Packard was once like many technology companies, flush with cash, a darling of Wall Street, good profits and high stock prices. They made a series of acquisitions, and many were sold at a loss down the road. They reinvested their capital poorly; their business and investors suffered.

In our 2015 article, “Buyback shares = BS 101” we discussed companies buying back their stock (reducing their number of shares outstanding) to make their Earnings Per Share (EPS) look better. Many borrowed money to buy back their shares at their all-time highs. The BS was not limited to a political agenda, it was an attempt to deceive the stockholders and increase their compensation.

How do investors know if a stock buyback is a good thing?

Fortuna Advisors introduced Buyback ROI on June 3, 2011 in an article published on CFO.com titled “What’s Your Return on Buybacks?” For the first time, investors and corporate observers could look clearly past the overly simplistic and often misleading Earnings Per Share (EPS) accretion assessment and determine if remaining shareholders benefit from a buyback. (Emphasis mine)

…. All EPS growth is not created equal.

…. We believe that this finding diminishes part of the allur associated with buybacks and emphasizes the need to evaluate buybacks using a consistent return-based framework, just like any other resource allocation.

Much of the failure is in the implementation phase:

“Over the 5-year period through December 2017, the 353 ranked companies delivered median Buyback ROI of 13.8%, up from 11.2% last year. This was the first up-tick after three years of decline …. but weighing on this was a median Buyback Effectiveness of negative 2.5% resulting from generally poor buyback timing (most companies buy more stock when its expensive than when it’s not) (Emphasis mine)…. Fully 75% of companies in the ranking have negative Buyback Effectiveness ….”

Buying stock at an all-time high (including the price/earnings ratio) may look good during a stock market boom. When the market suffers a major correction is the time to buy. While their findings show a good ROI over the last 5 years, what happens when the market tanks?

Go back to the basics. Instead of looking at the glossy profit & loss statements, go online and find the form 10-K (required by the SEC).

Take out all the accounting mumbo-jumbo and special adjustments. How much money did they make before the adjustments this year and last? Did they make more money this year? If not, why not?

Our article, “Pepsi Cola Hits the Spot?” outlines how Pepsi reported “Core consistent currency operating profit increased 12%.” Yeah right! When you pull back the curtain, pre-tax earnings dropped by $1.3 billion. Pepsi should be awarded a PhD for that one!

Pepsi bought back 200 million shares to make their EPS look better. Don’t get fooled by the hype! When a company makes a buyback announcement, it’s generally NOT the time to buy, that’s why insiders are selling fast and furious.

I prefer companies tell the truth and use their excess cash to pay dividends. A good dividend yield will make the stock attractive; particularly when investors are desperately searching for income.

The deception comes from the political class, media and much of corporate America. Investors should do their own homework rather than being baffled by the BS – the pile is growing each day.

Jo and I drove across the country back home to AZ. Every trip has some special memories.

We stopped for gas in Endee, NM, right across the TX/NM border. We had been traveling through ranch land all day. We went into Russell’s Travel Center and it was really cool. We saw the heartland of America for sure. 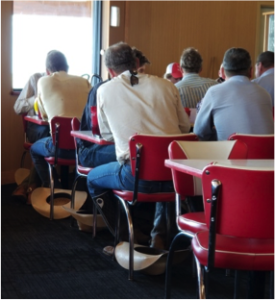 We got seated in our booth and Jo said. “Turn around and look.” There were 16 cowboys, huge belt buckles, boots and spurs with their hats sitting on the floor. Jo took a closeup of one set of boots. I may try to enlarge the picture and hang it up.

When they got up to leave, I’d guess half of them were well over 6′ tall. There were some big boys. 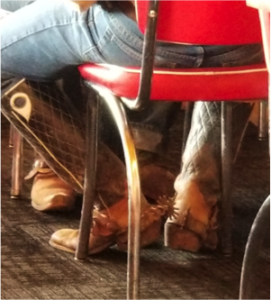 The size of their spurs gave new meaning to the saying, “Don’t Squat With Your Spurs On”.

They piled into their pickup trucks with dual rear wheels, pulling large horse trailers. Jo noticed all the horses were saddled and ready to go. It’s easy to imagine they are heading to the next roundup just like the cowboy movies you saw when you were a kid.

If you are on I-40, the Café is just across the NM border. The food was great, and the FREE car museum was worth the time it took to walk through it. I highly recommend it. 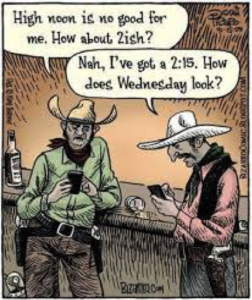