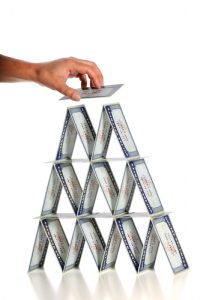 I’m frequently asked, “Should I count on social security when doing retirement planning?” The best approach is to discuss what my wife Jo and I have experienced.

Will our net monthly income from social security ever really keep up with inflation?

Don’t waste your time trying to convince a retiree that inflation is under control. While receiving small COLA increases in benefits, medical costs are increasing by double to triple digits with no end in sight.

Been to a restaurant or grocery store lately? With the increases in the minimum wage, double-digit price increases are much too common.

Good friend Chuck Butler regularly writes about the “hedonic adjustments” made by government economists to suit the needs of the government – particularly when it comes to inflation. Government reported inflation is low when it’s tied to benefits, but when it comes to charging for Medicare and drugs the charges skyrocket.

US Inflation Calculator tells us inflation increased 2.8% over the same time frame.

Lord knows how much higher the government debt would be if retired government workers and social security recipients received honest COLA increases annually.

What the government giveth, they take away and more!

While social security was originally sold as retirement insurance it has changed dramatically. The government decided to get into the health care business and the premiums are skyrocketing.

Hang on a minute! Isn’t there supposed to be a social security trust fund? How can the liability be “unfunded?”

Theoretically, when money was deducted from your paycheck it was to be held by the government in trust, invested, and be waiting for you when you retire. Social security was not a gift from the government, but rather returning YOUR money.

The trust fund may exist but it consists of government IOU’s. The government spent your money to pay current bills, banking on the fact the population would continue to grow and pay more in taxes than was required to be paid out in benefits.

It’s no longer happening that way. Benefit payments are exceeding revenue collected; requiring the government to borrow money to pay the difference.

The Heritage Foundation provides a graphic showing the problem is increasing rapidly. 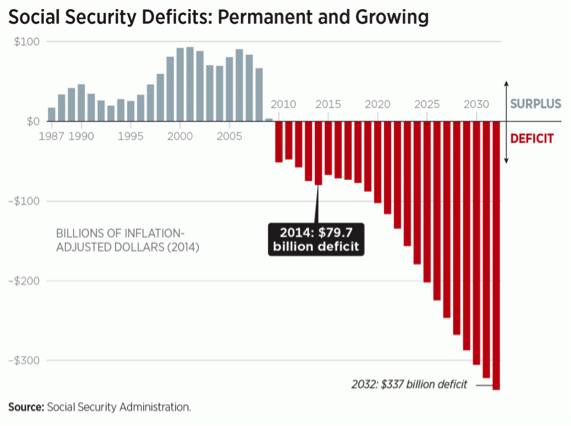 While congress prefers to ignore the situation, the day of political reckoning will eventually arrive.

Good friend Doug H. sent me an article, “Mass Exodus: Hundreds of Thousands of People Fled These Three Deep Blue States in 2017”. He highlighted the portion about Illinois:

“Long beset by twin budget and pension crises and the erosion of its tax base, Illinois lost so many residents that it dropped from the fifth to the sixth-most populous state in 2017….”

What’s the difference between the states who are facing huge underfunded pensions, versus the federal government and Social Security?

Some state courts have required honest accounting and reporting. In late 2016 the “CalPERS board gives green light to cut assumed rate of return to 7%”. In the current environment, a 7% return sounds like a lot of high risk investments, but it is at least a step in the right direction. Unfortunately, there is little oversight at the federal level.

State pension funds invest in debt instruments of others. The social security trust fund is all federal IOU’s.

Many Illinois pensions are guaranteed by the state constitution. The Illinois Supreme court ruled that a constitutional amendment is required to change the benefits. With Social Security, the federal government can amend the plan at will, and has a history of doing so.

While I doubt that this will ever come out of committee, in December 2016 Yahoo Finance published this; “Here’s a First Draft of GOP’s Plan to Overhaul Social Security.”

Here are some highlights:

The article summarizes, “(This) proposal … is little more than an opening bid in a much larger conversation about entitlement reform (emphasis mine) in the coming year.”

Social security went from a trust fund holding your money to another government entitlement program. It’s now nothing more than political promises.

The major difference between social security and any state, local or private pension program is simple. The federal government can create money. The political class willingly prints away increasing government debt as opposed to using any fiscal restraint. State pension benefits are paid by investment income, current taxes and borrowing.

The political class looks for ways to reduce benefits and increase taxes without creating a rebellion. Social Security benefits must be cut and taxes increased. Every generation will be affected; the political fight will be over who will bear the largest burden from the broken promises.

Can you count on social security in the future?

My opinion is nothing more than an educated guess based on what my wife and I are experiencing. Were we 20 years younger doing our financial planning here are things we would consider.

Take action now! It’s never too early to begin your retirement savings plan. You can’t count on the government to take care of you. For generations politicians made promises to get elected. Today many of those promises are coming due – and are impossible to keep.

The longer congress ignores the problem, the more draconian the solution will be. Those who see things clearly, and work around it will be much better off. Unless you plan on working until you die, you better get serious about saving money!

If you are thinking about when you should file for social security, I suggest you download our free report, “The #1 Secret You MUST Know Before Filing For Social Security”.

You paid a lot of money into the system and want to have as much of YOUR money returned as possible before you die. Do your homework and don’t make your decision hastily.

In the early part of this week I will be in Kansas City on business. The 10-day forecast called for temperatures 20 degrees below normal.

Fifty years ago, I ended up with frostbite on one ear and it was very painful. Even today, in extremely cold weather that ear reminds me of the experience. If God meant for me to be cold, I would have more fur. You can see my picture on the website. In today’s politically correct world, I am considered “follicle(y) challenged.”

Many thanks to the readers who offered Jo encouragement after her surgery for a detached retina. She is recovering nicely.

IT WAS SO COLD: