Thank you Stan for dropping the ball. 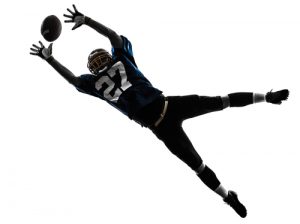 Last summer we went to Illinois to attend my 58th reunion of the Class of 1958. I’ve changed names to protect everyone’s privacy, but the story is real.

Unlike the 50th reunion with it’s choreographed speaker list, we had an open microphone for anyone to speak. Stan, one of our standout student-athletes (he still holds a track record, and he was a commencement speaker) took the microphone. He told a story none of us would remember, but he would never forget. He apologized for dropping a touchdown pass that cost us the game against our arch-rival.

Tears welled up in my eyes when other athletes also took the microphone and teased him and everyone laughed. The rest of us remembered the touchdowns, blue ribbons and wonderful times. For almost 60 years he worried about dropping that touchdown pass.

On the drive back to Arizona, I kept thinking about the experience. I realized this was a great lesson for all of us. I wrote an open letter to those who attended thanking him for dropping the ball.

What is school all about?

Maybe I am old-fashioned but isn’t high school supposed to teach young people how to survive, and thrive as adults? It was part of the bridge to our independence in the real world.

When Stan dropped a touchdown pass, or Sal missed two free throws and we lost by a point, or Tim cost us a game when he threw the ball over the first baseman’s head – there were lessons to be learned.

In real life everyone drops the ball; no one is perfect. It’s what happens after dropping the ball – picking yourself up and continuing on that we all needed to learn. It’s a cross-country runner falling to the ground, scrambling to his feet and running hard for two more miles, knowing he has no chance of earning a ribbon.

What about the rest of us?

You won’t find much next to my name in the high school yearbook. I went out for baseball for two years. As a sophomore the right field job was mine until I let a ball go through my legs and the hitter rounded the bases. Next day freshman Paul Smith was the right fielder. I had 3 at bats and one hit to show for an entire baseball season.

Remember Ron S.? He dropped the ball too. He had a very lucrative “Midnight Auto Supply” hubcap business going. One of his “regulars” was tied up and he invited me to come along on a Saturday night for some easy money. I declined the offer.

The following week the police came into our classroom and pulled him and his gang right out of class. I couldn’t stop shaking realizing just how close I came to really messing up. We never saw Ron again.

We all remember the tragic deaths of Sara and Todd on a hayride. We didn’t have, or need grievance counselors. Our class, and the entire school, pulled together and we got through it. We took care of it in our own society. We learned a difficult lesson at a very young age; life is tough, life is not fair and tomorrow is promised to no one.

There were many positive memories.

No one gave us “participation” trophies. Whether it was academics or athletics, awards had to be earned. No one worried about hurting our feelings, we had lessons to learn about the real world.

I tried out for the track team. Weighing a skinny 127 pounds, I knew I couldn’t throw the shot put or discus. Maybe I could try some running events. I very quietly got behind Stan (a sprinter), John (tops in the quarter mile) and Phil (who went to the state as a cross country runner). They were jogging together at a brisk pace. I got behind them to learn what they did. It took less than a quarter mile to realize I was running as fast as I could, out of breath, exhausted and could not keep up. They were jogging, smiling and talking. The next day I retired and sold my slightly used track shoes for half of what I paid for them.

I understood I was never going to be a good athlete – something I needed to learn. My time would be better spent focusing on things I could do well. Isn’t that a lesson one is supposed to learn in high school?

One thing I cherish about our high school class is we gave each other feedback, both directly and indirectly. Life is competition. You better find your best event, something you can do well, whether it is athletics or something else. Feeding a family in a competitive job market is a real challenge. Learning social skills is part of the deal.

Honest self-appraisals are a good thing

Ten days after high school I was in the Marine Corps. During boot camp I gained 25 pounds. I became a different person, both mentally and physically. Those 16 weeks changed my life forever.

When I came home on leave I went back to my high school. The football team was practicing and I ran 5 miles around the track watching them. I barely broke a sweat. Heck two weeks earlier I did the same thing with a 20 pound backpack carrying a rifle weighing 9.5 pounds. I understood that even then, I probably could never keep up with those football players who had more God-given athletic ability.

Today I joke about my grades. I helped make the upper half of the class possible. You can imagine my shock when the Marine Corps pulled me out of the recruit platoon and offered to send me to the Naval Academy. They told me my IQ was in the top 2% in the world. I turned down the offer because I was not willing to make a ten-year commitment, a decision I have never regretted.

Yet another lesson learned. Maybe if I applied myself, I could do better academically. Maybe the lousy grades were meant to send me a message. Could it be that I was lazy and unmotivated? A decade later I was teaching at one of the top academic universities in the country.

I thanked Stan for dropping the ball, along with all the others who we looked up to when they succeeded or stumbled. They helped us understand real life and prepare us for the journey ahead.

What has happened in the last 58 years?

Today, everyone gets a trophy for participation. Many schools avoid our old A-F grading systems. Everybody is praised, no one gets negative feedback; we don’t want to hurt anyone’s feelings.

What happened to the Letterman’s Club? I dreamed of being a good athlete and wearing my jacket or sweater. Today you could probably get a Varsity Letter for attending 80% of your classes – something that should be expected. Achievement is not defined as meeting minimum expectations.

I would have loved to be a class officer or speak at graduation. Some schools no longer designate their top academic students at graduation claiming it is much too competitive. I spent 37 years traveling the world as a public speaker but never earned the right to do so in front of my peers – and rightly so.

The reaction on college campuses all over the country to the election results is damning evidence as just how unprepared our youth are to cope, survive and thrive in the real world. Whatever happened to the idea of picking yourself up, brushing yourself off, and trying harder next time? Mental toughness can be taught. The faculty should be sued for dereliction of duty!

Shielding the youth against life’s harsh realities accomplishes nothing. The lessons must be learned, better sooner than later.

Some straight talk to parents and young people

1. Forget the participation trophies. That is not real world. Life is competition. The job market is tough and those who understand and compete will fare well. Participation is mandatory; to succeed you have to do more than just show up regularly. Arrive early and work your tail off.

2. Failure is a lesson to be learned. It’s OK to fail; it’s a great opportunity. Look for lessons to be learned. The sooner you have an honest assessment of your skills the better off you will be. Find things you enjoy and work hard to hone your skills.

3. Parents – wake up and do your job! My granddaughter’s husband coached basketball at a school that was so small, they played “B” teams from the larger schools. Some parents objected when he raised his voice giving the team well-deserved criticism for lousy practice habits. Those same parents said they were tired of losing, asking him if he could schedule lower level “C” team competition. If you don’t succeed change the standards? He quit teaching and coaching at the end of the school year.

4. Understand why are you in school. The goal is to teach young people to become financially and emotionally independent adults. Unless you enjoy following the rules of others for the rest of your life, embrace independence.

Life has challenges, and overcoming them is one of the greatest joys in life. The question is do you want to be a participant, or be able to earn enough money to become truly independent? There are plenty of opportunities available for those who are willing to work.

Jo and I had a wonderful family time over Christmas enjoying the young grandsons. It is fun watching them grow. Two years ago grandson Braidyn got a guitar for Christmas. We hoped he would take lessons and stick with it. This year he played and sang a Christmas carol for us which was lot of fun. My guess is music will be something he enjoys his entire life.

Hard to believe 2017 is just a few days away. Where does the time go? Certainly 2016 was full of surprises, including the Cubs winning their first World Series in 108 years. Spring training starts in about six weeks and they are soon to become last year’s champions.

After our Christmas feast, our annual diet has begun.

In keeping with the theme of this week’s article I want to share a quote from legendary football coach, Vince Lombardi:

“The greatest accomplishment is not in never falling, but in rising again after you fall.”

Happy New Year! May 2017 bring everyone good health and happiness!