Step Right Up, Get Your Stimmy Checks! 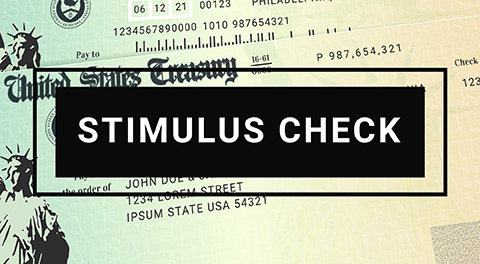 Who wouldn’t want FREE money? Politicians love it and citizens gladly accept it. Stimmy checks?? The Government Accounting Office touts, “The federal government made direct payments to individuals totaling $931billion.” That does not include student loan forgiveness or other government handouts.

Now the states are getting into the act. Yahoo supplies the current scorecard, “These twenty states are sending out stimulus checks.”

Red and blue states alike are finding ways to send checks to citizens during this election year. Most Americans know government handouts make inflation worse but they don’t seem to care.

“Americans list government spending as among the main causes of inflation.

But many are welcoming the inflation relief measures that over 15 states have adopted.

…. Americans view inflation as the top problem facing the country today, and most think government spending is a big reason why. But many are still open to receiving another stimulus check from their state to help them cope with higher prices.

In an April poll from the right-leaning advocacy group Americans for Prosperity with 1,500 respondents, 73% of respondents said government spending was a ‘major cause’ of higher prices

The same poll…found that 75% of those surveyed ‘support the idea of stimulus checks as a government response to inflation.’

A May Public Policy Institute of California survey…found that 62% supported the state’s $18 billion inflation relief plan, the majority of which is going towards relief payments.”

…. The payments are part of what Newsom is calling a California Comeback Plan, pitched by a governor who is fighting a Republican-led campaign to recall him from office.

Oakland Mayor Libby Schaaf welcomed the new round of financial help…. Shaaf said it is important that the state financial help is also being provided to those in the country illegally who were not eligible for federal stimulus checks.”

Yahoo news reports, “California and Florida are dueling over stimulus checks as a tool against inflation, and it’s the latest example of their governors’ ideological clash.”

…. California’s aid is among the most generous. Newsom and Democratic legislators approved a $17 billion aid package in June that included stimulus payments for roughly 23 million Californians. Households will receive up to $1,050 in a one-time payment, and checks start to shrink for those earning more than $75,000.

….The payments aim to “help you fill your gas tank and put food on the table,” Newsom said in a June 26 tweet.

…. In Florida, DeSantis took a more targeted approach to inflation aid. About 59,000 families who are already receiving regular government assistance will receive one-time $450 checks per child.

….The payments will go out in October, just ahead of the November election.”

I’ll let others fight over the red/blue ideological issues of how the money should be allocated. I disagree with both governors who say their stimmy checks will not make inflation worse.

There is a much bigger issue that no one is discussing.

Where is the money coming from?

States cannot create money out of thin air like the federal government, they must collect taxes and/or borrow to pay their bills.

Here is a snapshot supplied by USDebtClock.org:

Florida’s total debt is $135 billion, while California stands at $549 billion. Both states had budget surpluses. The accumulated debt is a result of past spending outpacing income.

The politicos are fighting over how the surplus should be SPENT. PPIC reports: (Emphasis mine)

“Last month, Governor Newsom released a $300.7 billion spending plan and announced an estimated $97.5 billion state budget surplus as part of the May Revision to the 2022-2023 state budget. …. Californians…are divided on how to SPEND the (nearly $100 billion) surplus.

…. Given a choice, 33% want to increase funding for education and health and human services, 27% want to refund some of the money to the people of California, and 22% favor one-time state spending for transportation, water, and infrastructure. Just 13% want to pay down state debt and build up the budget reserve.”

“Keynesian economics suggests that governments should run a surplus during times of prosperity, and a deficit in times of depression. This allows the government to save money when it is well off, and to spend money on fiscal stimulus when the economy is less well off.

…. Running a budget surplus means that government bodies will have additional money to spend at the end of an accounting period. This extra cash can be used to pay off government debts or reinvested in other government projects. It can even be returned to the public in the form of a tax cut.

A large surplus also reduces the need for borrowing through bond issues. This will reduce interest rates in that country, allowing people and businesses to borrow money at a lower cost.”

The Journal of Post Keynesian Economics puts things in perspective:

“It is commonly believed that Keynes’ primary policy prescription for economic stabilization and full employment is federal government deficit spending.

…. The policies pursued in the United States over the last forty years have not been consistent with Keynes’ proposals for economic stabilization and have caused ever increasing deficits and instability.”

Putting the economic gobbledygook aside, some common-sense, kitchen table economics and logic is needed – clearly an unnatural act for politicos….

Becoming wealthy is easy to understand. Earn more than you spend and save/invest the difference.

In today’s world, most working people have a 401k or some type of tax-sheltered pension plan to help them prepare for retirement. Some of the surplus savings goes into retirement planning.

In 2018 Martin Armstrong wrote, “CalPERS on the Brink of Insolvency.”

“Are California’s public pension funds headed for another crisis?

Growth in advanced economies is expected to drop sharply from 5.1% in 2021 to 2.6% this year, according to a forecast released this summer by the World Bank that is 1.2 percentage points lower than its January projection – leading to worries that lackluster market returns may extend indefinitely.

In California, the cumulative assets of 18 of the largest pension funds are expected to drop this year from $1.37 trillion to $1.09 trillion, lowering the funding ratio from 86.8% to 79.6%…. A pension fund’s ideal target is full funding, or a 100% ratio, which the plans last reached cumulatively in 2007 just before the financial crisis.” (Emphasis mine)

Nothing was mentioned about using state budget surpluses to fund pension obligations of the states sending out stimmy checks. Bailing out government workers pensions is politically unpopular, particularly in an election year.

States borrowed at historically low interest rates. When the debt becomes due, it will either be paid off or refinanced at a much higher interest rate.

Let’s assume CA decided to pay off $50 billion of their debt and interest rates increase by 3%. Paying down debt will save them $1.5 billion in interest annually.

Following the same premise, using half of Florida’s estimated surplus to pay off debt would save them $300 million in interest annually.

Doing so would require politicos to act responsibly; an unrealistic assumption.

Many corporations borrowed at low interest rates to buy back their stock (giving management nice bonuses) and pay out increased dividends. That practice steals from future profits and will hurt the company in the long term.

Not using some of the government surpluses to pay down debt, instead of playing politics, is generational theft, plain and simple.

Old fart Baby Boomer politicians are being replaced with Generation X. They are the first generation to be worse off than their parents when it comes to retirement. They are angry, and I can’t blame them. Look for a generational backlash, starting with health care…. 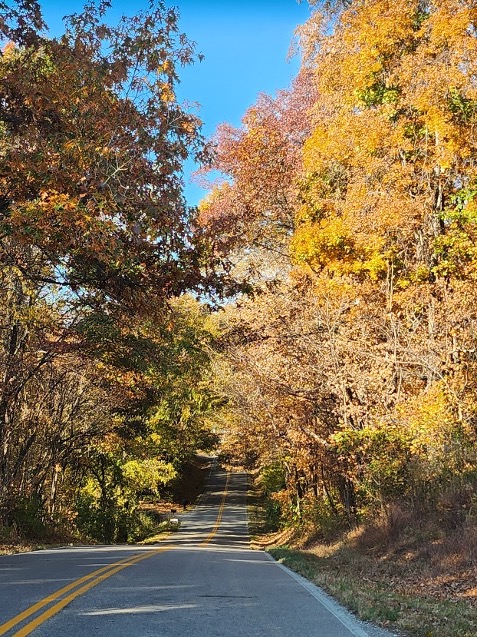 The trees in southern Indiana have lost most of their leaves and are growing bare, a sign of winter coming. One last hurrah….

Jo and I took a drive on some very hilly country roads and it was beautiful. Many times we were in a tunnel of trees, where the limbs from trees on each side of the road met high above the middle. Each time we came over the crest of a hill, it was exciting, anticipating what may appear.

The roads are two lanes, and we didn’t want to stop for fear of getting hit from behind. The photo was taken through the front windshield. Sometimes the forest was so thick there was little sunlight showing through.

Now that baseball season is over, football and hockey will be our evening entertainment for the next several months. Unfortunately, my favorite football team, Northwestern, is having a terrible season.

The Tampa Bay Lightning is slow out of the gate also. There are several new players and I’m hoping they jell quickly. Jo and I really enjoy watching hockey, it is an exciting sport. We plan to take the family to see the local, minor league hockey team when they are in town.

“When you are deep in the debt hole, you are not going to get out by continuing to dig deeper!”

We are a generation that:

spent all their free time in the streets with their friends.

Much truth in my favorite: