Stop Losses Are a MUST For Retirement Investors 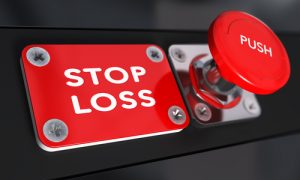 Dad pointed his finger at me, raised his voice and said, “Sit down, shut up, and listen!” His face was beet red; I’d pushed him too far.

My parents invested in Certificates of Deposit ONLY – they never touched stocks. I showed dad charts from my economics professor outlining how much more an investor would make in stocks – it looked like a no-brainer – they were missing out! Without realizing it, I was putting dad down.

In measured tones, he explained he and his four brothers left high school during The Great Depression. For a decade there was no work. They earned money playing semi-professional softball, pooling it with their parents so they could all survive.

“Don’t tell me the stock market is safe, I know better! I know people who lost everything. We work hard for our money and can’t afford to lose it!”

When I retired, I finally understood. I put the bulk of our life savings in CDs, just like dad. Making money was nice, but not losing it took priority.

When the Fed bailed out the banks and interest rates dropped, reluctant investors, desperately needing income, were forced in to the stock market – and the market continues to set record highs.

Many excellent analysts advocate “buy and hold”; believing an emotional investor will buy at highs. As the stock drops they hold on and hope the market comes back, finally selling in a panic when the market is low.

They contend the market has always come back. Investors that held on after the 2008 crash were well rewarded.

Here are some examples:

CNBC: “Investors: Keep your itchy finger off the trigger.”

Business Insider, “This is the biggest mistake investors can make right now”, “History shows that panicking during bouts of volatility is the most classic mistake an investor can make.”

Time: “8 Reasons to Stay Calm When the Market Tanks.” Reason #1 – It Always Goes Back Up. (Emphasis mine) Reason #8 is laughable – It’s an Opportunity for Tax Loss Harvesting. No investor enjoys carrying forward tax losses year after year.

“Hope is a money-loser in the investment business.

Hope gets in the way of common sense.

One of the first rules in investing is “Don’t take the big loss.” In order to do that, you’ve got to be willing to take a small loss. (Emphasis mine)

Hoping is the devil that bids you to sit – while your portfolio of stocks goes down the drain.

If you want to be wealthy, you must not lose money, or should I say not lose BIG money.”

Which advice is right for you? Individual investors must look at their personal, individual situation.

How old is the investor? No one can guarantee a recovery in his or her lifetime.

Retirees fear running out of money. A major guideline for retirees was “You could always earn 6% in a CD, and withdraw 4% to help pay the bills”. It worked well for me until 2008.

Younger investors have the luxury of time that baby boomers and retirees don’t have – particularly if they are working. Holding on for dear life is a viable option.

As you get older, preservation of capital takes priority.

Emotions – A second factor is the emotional toll a large downward correction takes on the investor. The emotional swings during times of turbulence can cause health problems.

My broker and I were skeptics during the Internet boom. We finally took the plunge and bought EMC, a high-flying tech stock. We were ecstatic when it doubled and kept going up.

My broker called, “What should we do?” We agreed, “It’s come back before, it can’t go much lower, let’s hang on.”

With each drop, we convinced each other it couldn’t go any lower – hope interfered with common sense. We finally capitulated and sold with a small profit, wishing we had been smart enough to sell earlier.

The emotional trauma of losing money, gut-wrenching sleepless nights and self-doubt left a very painful mark. I wouldn’t wish that on anyone!

Our challenge? How do we insure it never happens again?

Stop Losses are a MUST for retirement money

A stop loss is designed to prevent BIG losses. As Richard Russell said, “If you want to be wealthy, you must not lose … BIG money.”

I recently wrote about how diversification helps protect investors from catastrophic losses. Maintaining stop losses is the next step in the process.

When you buy a stock, immediately put a stop loss in place. (Stay tuned for the exceptions.)

There are three kinds of stop losses; a hard stop, a trailing stop and a stop “limit”.

If the stock hits $16 (or below) a sell order is automatically placed at “market”. If the stock is rapidly tanking you could get less than $16.

A trailing stop is set as a percentage. Using the ABC example, assume you entered an order for a 20% “trailing stop”. When the stock drops 20% from the highest price since you bought it, a sell order (at market) is entered. If ABC rose to $30, the stop loss would rise to $24 (20% below the $30 high). Getting stopped out, while protecting a profit, feels good.

This is a hard stop. Assume ABC closed the day at $16.25 and opened the next morning at $15.75, and you had a “Stop limit” order to sell @ $16.00. Unless the price rises back to $16.00 your sell order will not be executed. There are very few cases where this strategy makes sense. Consider the next step as an alternative.

When you place a stop loss order with your broker, the market maker also sees it. There are cases where an unethical market maker stops the investor out by buying their stock and reselling it for a profit.

Stop loss alerts are a better option for stocks that are thinly traded. They can be set with most online brokers, or you can use subscription services that send you a text message. Once you receive the alert, review the situation and then place a sell order if you feel it’s appropriate.

Speculators buy into start up companies, or mining stocks for example. These are high risk – high reward stocks that are thinly traded. A buy or sell order for a few thousand shares can cause a big price swing. The pros never set a stop loss on these type issues; however many set a stop loss alert, they want to know what is going on.

Review your stop losses regularly. Schwab automatically cancels them after 60 days. Many times I tighten up my stops to “protect my profit” along the way. No more EMC mistakes for me!

I’m often asked, “What happens if you are stopped out and the stock rises? You will miss out on the upside.”

Regardless of what happens afterward, don’t look back – the systems worked! What if it continues to tank like EMC did? Investors must be willing to take a small loss in order to avoid taking a BIG loss.

Nothing prevents you from buying back in later.

Past history isn’t the issue – it’s personal! As a young man I took gambling lessons. The #1 lesson for me was when to pocket your chips and walk away from the table. It’s a lesson in life.

When you are investing retirement money, what is more important – chasing rainbows or not losing BIG money? Protect you assets, so when you do take a loss you lose nary a wink of sleep!

Jo and I put 1,875 miles on the Sienna during our recent trip to Reno. It was just like the old days; most all the driving was on US and state highways. 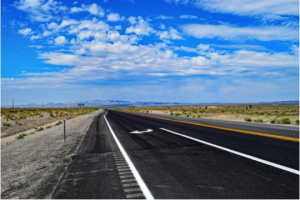 Many locals say the drive is boring, but Jo and I loved the scenery. While Montana is called “big sky” country, the vast blue sky in northern NV is pretty neat.

This was taken on US-95 just north of Goldfield, NV. Over the distant mountain is Tonopah, a real oasis in the desert. It’s fun to see the road stretch for miles on a hot day, with the mirage disappearing as you approach. I can’t imagine what it was like driving through the desert without the comfort of air conditioning. 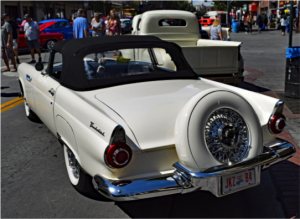 Jo asked me what my favorite car was of all those we saw in the show. That was a hard question, so many of them were vintage autos that we lusted over when we were teenagers.

I finally settled on this 1956 Ford Thunderbird. I loved the early T-Birds with their continental kits in the back. Many of our friends are Corvette lovers; however I preferred the T-Birds. I felt Ford made a big mistake when they made the T-Bird bigger. The early ones were terrific.

I want to remind readers our friends at the Dividend Hunter have offered our readers a nice discount on their publication. I recommend it for those looking for solid, dividend-paying stocks. Just remember to use stop losses.

And my favorite (after a long driving trip):