Would You Support A War To Preserve The Union? 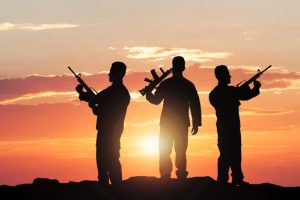 After the 2016 election I wrote about Calexit, a movement urging Californians to sign a petition allowing for a secession referendum.

In April 2017, they pulled the plug on the initiative when it was discovered the leader of the campaign, Louis J. Marinelli, had Russian connections. He’s now seeking permanent residence in Russia.

It didn’t take long before the idea came up again. The Mercury News reports:

“A third “Calexit” ballot initiative was filed … seeking to wrest the Golden State and its humongous economy away from the rest of the nation – this time by way of the U.S. Constitution.

…. Under the initiative, California’s Legislature would ask Congress to call a constitutional convention, where state lawmakers would propose changes that would give states – not just California – “a clear and reasonable path” for “complete independence.” (Emphasis mine)

California is not alone.

The Brits have spoken. In the summer of 2016, I wrote, “Brexit & lunch pails”, outlining why the British voted to secede from the European Union (EU). Once the votes were counted, the Brits were to negotiate a settlement with the EU and go back to being an independent, sovereign nation.

The negotiations are not going well. The Daily Mail quotes Hans-Olaf Henkel, a former chief executive of IBM and president of the Federation of German Industries:

“Brussels wants to ‘punish’ Britain for Brexit and is determined to make our departure a ‘catastrophe’….

The reason is simple. They would seek to make sure that Brexit is such a catastrophe that no country dares to take the step of leaving the EU again.”

Brussels is demanding an €85 billion divorce settlement from Britain. “Preposterous!” say the Brits. The Brits are committed to leave the EU in March 2019, with or without a deal.

The EU Observer reports, “May on mission impossible in Brussels”:

“UK prime minister Theresa May called on other EU leaders to “step forward together” to make progress in Brexit negotiations and move on to talks about the UK-EU future relationship.

That came as a disappointment to her advisors, who felt the offer of an initial €20 billion in EU budget contributions during a two year transition period was enough to break the impasse. The offer was also as far as she could go….”

Each side continues trying to sway public opinion in their favor. The EU leaders worry the entire union might fall apart. Like many negotiations with a deadline, they will probably get serious at the last minute.

At least they are not shooting at each other.

Italy joins in. The Express article, “We will never be your slaves!’ Italy in crisis as THOUSANDS demand EXIT from ‘EU MAFIA” tells us:

“Thousands of anti-EU protesters voiced their fury at Brussels yesterday in one of the largest ever demonstrations against the European bloc to take place in Italy.”

Zerohedge reminds us about the EU:

“In each case, the über states were created without the expressed majority interest of the voters. (In … no case did a majority of voters vote in favor of joining the EU. The leaders did it in spite of the lack of support.)

So far, they are not shooting at each other.

“Despite ballot box confiscation and thousands of police sent by Madrid to stop the independence vote, Catalonia will defy Prime Minister Mariano Rajoy and the Spanish court.

Columns of tractors waving the lone-star flag of Catalan independence are converging on the region’s towns in support of Sunday’s banned referendum.

Supporters cheered as a column of vehicles, dubbed a Tractorada, rolled into the capital, Barcelona, streaming past the famous Sagrada Familia church.”

The New York Times outlines why the Catalans feel independence is so important:

“Unlike the Kurds, who voted overwhelmingly this week to separate from Iraq, Catalans, who live in an autonomous region in Spain’s northeast, are not driven by an external threat or oppression. They live well, in the prosperous heart of Europe. Their grievances are old and bone-deep….

Ask “independistas” why the need to break away from Spain is so urgent, and the answer goes back to 1714, when Philip V of Spain captured Barcelona during the War of the Spanish. …. In Catalonia, this is not obscure history: It is common…. to hear the archaic insult “botifler,” which means a supporter of Philip V and his ally, the French house of Bourbon.

…. Under Franco’s dictatorship, which ended in 1975, the government tried to stamp out all Catalan institutions and the language, and thousands of people were executed in purges. Virtually no Catalan family emerged from that period unscarred.”

“According to the Court, the Catalan legislation, approved by the region on Sept. 6 and suspended by the court the following day, usurped powers of the State to hold referendums. It also violated the principle that the Spanish nation is indissoluble.

In other words, this is the definitive confirmation from Spain that any Catalan separation is not possible, nor legal.”

Following the court decision, the Spanish government invoked Article 155 of Spain’s 1978 Constitution, giving Spanish Prime Minister Rajoy the power to oust the Catalan government. Tensions were escalated further when a judge ruled two top leaders of the grassroots movement should remain in prison, without bail. If they are convicted of sedition, they could face prison sentences of up to ten years.

“If found guilty, the charges of rebellion, sedition and misuse of public funds carry prison terms of up to 30, 15 and 6 years, respectively, under Spanish law.”

Spain issued arrest warrants and asked Belgium to extradite them for prosecution. The Belgian court has deferred the decision to “next month”. The idea of political prisoners is alive and well.

So far, they are not shooting at each other.

The EU, fearful of losing members, said they would not recognize Catalan independence.

The beat continues in the Ukraine. The Daily Signal reported US Secretary of State, James Mattis, recently visited the Ukraine for an Independence Day celebration, commemorating their 26th year of independence from the Soviet Union.

Things are not going well:

“After two failed cease-fires, this is Ukraine’s fourth consecutive Independence Day at war. Twenty-six years after the breakup of the Soviet Union, Ukraine is still paying in blood and treasure for its independence from Russian vassalage.

As of Thursday, the war in eastern Ukraine has killed 10,092 Ukrainians, wounded 23,973 more, and displaced about 1.7 million people.”

Unfortunately, they are still shooting at each other.

“…. Political power corrupts the morals and the judgment. History teaches no clearer lesson.

Political power is the legalized privilege of initiating the use of brute force on persons who have not harmed anyone.

The only organizations that have this privilege are governments. Practically everything they do is quietly backed somewhere by the threat, “do as we say or people with guns will haul you off to prison.”

…. This privilege corrupts, there is no way around it, and people who want it have something wrong with them. The American founders understood this. It’s why they tried to give us a government so small and inconsequential that no matter who got control of it, they could not do much damage.

The US government today has erupted into the most powerful in all of world history. So there is no reason to expect anything from it but lies, abuse and confusion.

The entire federal structure is built on the practice of robbing Tom to subsidize Dick and Harry, to buy their votes.”

Americans should remember the lessons of the first civil war. In 2012, BBC News reported on a study regarding how many Americans died:

“For more than a century, it has been accepted with a grain of salt that about 620,000 Americans died in the conflict….

If the estimates are accurate, more Americans died in the US Civil War than all other wars combined. What a tragedy!

“Preserving the union” today would only benefit the political class who are already fighting a populist, citizen president elected by the public; fed up with a corrupt government ruling against the will of the majority.

This is one time I agree with the Californians. A Constitutional amendment allowing states the right to become independent without retribution is a much better option than sending young people into battle once again.

I doubt many Americans, or Californians, would be willing to go to war should California (or any other state) wish to secede. Would a desperate federal government be able to sell the public on going to war? I sure hope not!

Subscriber, Dr. Dave R. sent along a link to an ad. A Buick dealer is trying to unload new 2016 models. The unions forced GM to produce too many cars in order to make production bonuses and it will eventually backfire on them. Financing a new 2016 vehicle may be a real problem for many buyers. 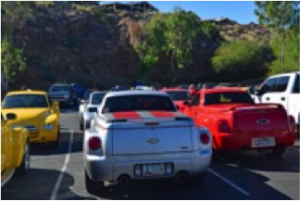 Approximately 30 SSR’s from three states and Canada met to have lunch and renew old friendships. It’s pretty neat driving through the Arizona desert in a caravan of cool, beautiful trucks. I know it sounds crazy driving for 5 hours on a postcard beautiful day to meet for a two-hour lunch, but it was a blast. We take the back roads, no traffic issues, and you can see forever.

SSR stands for Super Sport Roadster. A lot of baby boomers and seniors love them because it reminds us of the past. Jo and I love riding with the top down and we exchange grins all the time.

Good friend Rob G. sent along something many will appreciate: