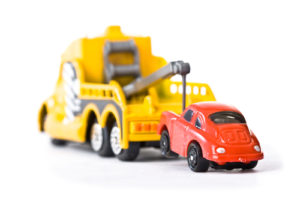 Former Fed Chairs, Janet Yellen and Ben Bernanke took great credit for steering the world recovery from the great recession. When something good happens, it’s a result of their masterful strategic planning. Why are they totally surprised when negative news gets reported?

The Business Insider headline blared, “A record 7 million Americans have stopped paying their car loans, and even economists are surprised.”

“A development that is surprising during a strong economy and labor market”: New York Fed.

Do their economists really wear those beanie hats with the propellers? At what point do these PhD’s lose their common sense? I’m serious! It doesn’t take a genius to understand cause and effect. Don’t they look at their own published data?

The New York Fed’s recent “Quarterly report on Household Debt and Credit” indicates that Americans have taken on record amounts of debt; student and auto loans are growing rapidly: 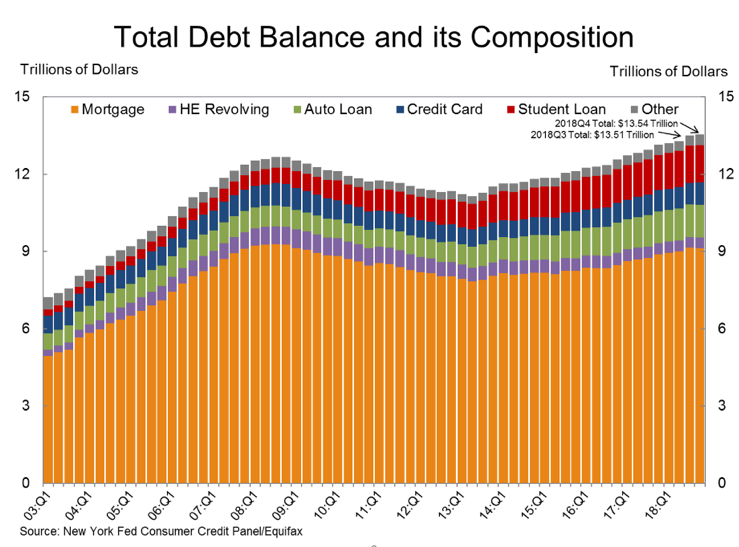 “2018’s strength in auto loans was primarily driven by those originated by the most creditworthy individuals…. The high volume of prime originations has caused a quality-shift in the outstanding pool of auto loans and,…. 30 percent of the $1.27 trillion in outstanding debt was originated to borrowers with credit scores over 760.

…. The share of total auto loans outstanding that was originated to subprime borrowers fell to 22 percent. These percentages would suggest that the overall auto loan stock is the highest quality that we have observed since our data began in 2000. However, with growth in auto loan participation, there are now more subprime auto loan borrowers than ever, and thus a larger group of borrowers at high risk of delinquency.”

Who are these struggling borrowers? 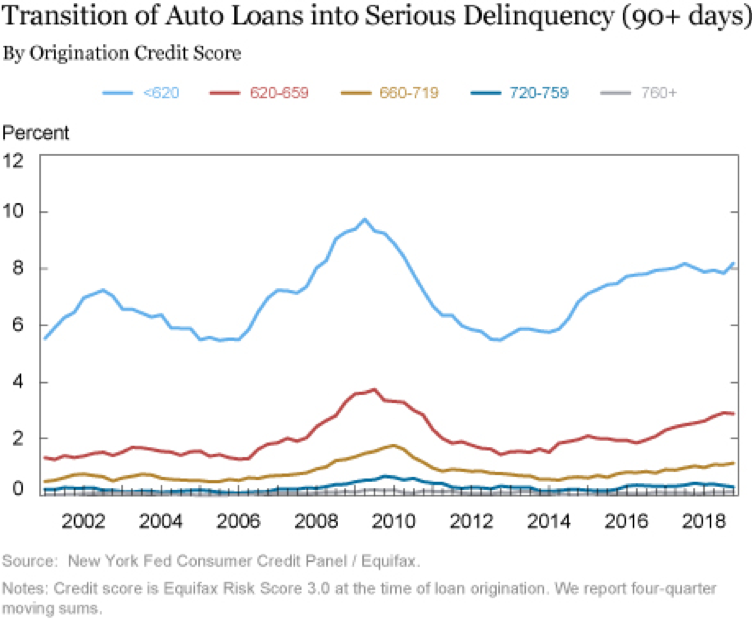 “The increase in delinquency is most obvious among the loans of the two groups of lower-score borrowers…. Borrowers with credit scores less than 620 (increased)…. Meanwhile, the delinquency transitions among those with the highest credit scores have remained stable and very low.” 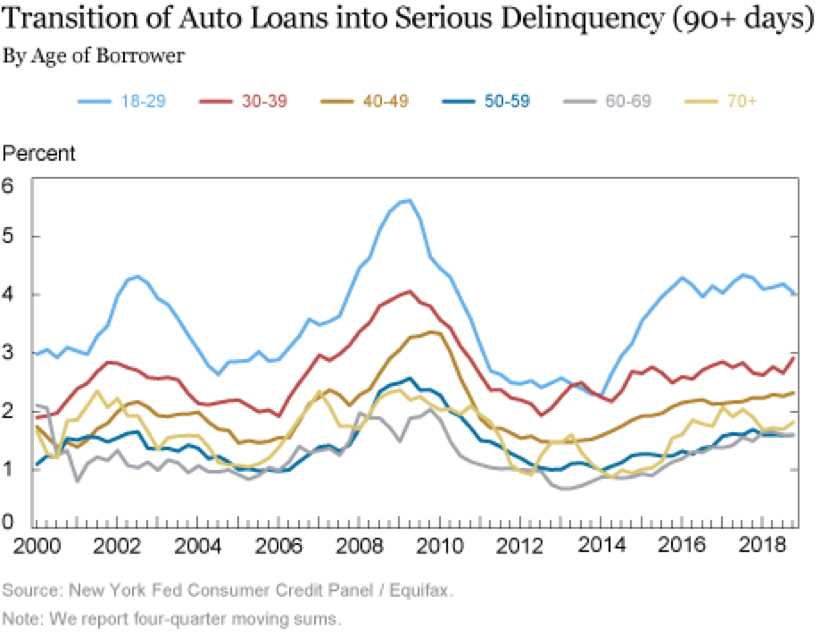 “When car loan delinquencies rise, it is a sign of significant duress among low-income and working-class Americans.

‘Your car loan is your No. 1 priority in terms of payment,’ said Michael Taiano, a senior director at Fitch Ratings. ‘If you don’t have a car, you can’t get back and forth to work…. A car is usually a higher priority payment than a home mortgage or rent.

…. It’s a lot easier to repossess a vehicle than to foreclose on a home.’

“…. The New York Fed said there were (over) a million more ‘troubled borrowers’ at the end of 2018 than there were in 2010, when unemployment hit 10 percent and the auto loan delinquency rate peaked.

“Most of the people who are behind on their bills have low credit scores and are under age 30, suggesting that young people are having a difficult time paying for their cars and their student loans at the same time.”

Who is lending them money? 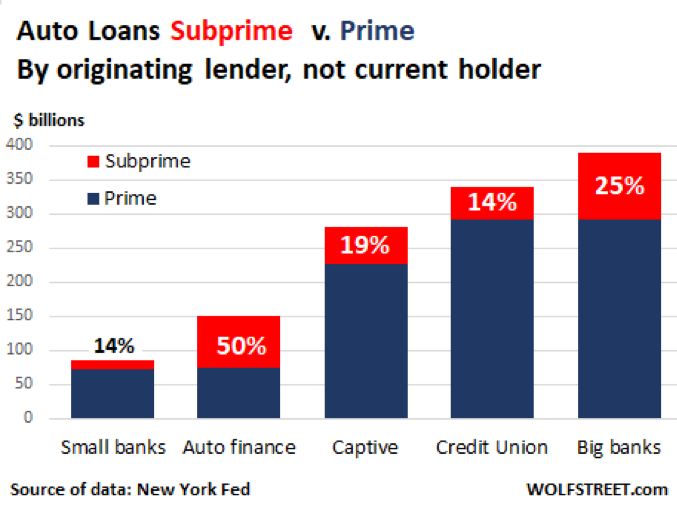 Half of the specialized auto finance lenders are to subprime buyers. Captive lenders are finance companies linked to the auto manufacturer; such as Ford Motor Credit.

Borrowers with top credit scores can expect to pay between 4.5-6% interest. Subprime borrowers can generally expect double-digit interest rates, some as high as 20%! It’s a catch-22; higher interest rates make it more difficult to repay the loan.

Why such high rates? On average, for every 6 people applying for a loan with scores below 620, one of them will default. The interest earned from the other 5 must cover the loss of repossessing and reselling the vehicle, probably at a loss.

Business Insider is critical of the lenders:

When young people are struggling to pay their student and car loans, is the real problem predatory lenders?

There are plenty of slick-talking salespeople ready to lend money to high-risk borrowers. The PIRG reports, “At the end of 2017, almost a third of all traded-in vehicles carried negative equity, with these vehicles being underwater by an average of $5,100.”

Doesn’t the borrower bear some responsibility? Particularly those who can’t pay their rent, college loans and car payments? What did they learn in college?

Some advice from a great-grandfather:

Don’t get trapped in the debt cycle. If you need to borrow, go to a small bank or credit union. If they won’t lend you the money, you can’t afford the car. Buy what you can afford and you should get a better interest rate.

You may want a starter BMW or cool pickup truck, but you need affordable, reliable transportation.

I don’t mean to sound insensitive, our generation also struggled when we were young. You can’t afford a middle-class lifestyle with college loans up to your eyeballs. Work hard, pay off your debts and you will get there sooner than you think.

Until you learn to live within your means, you will never be happy!

The borrower bears just as much responsibility as the lender, but ends up with all the heartache for many years. Let’s move on….

While the Fed may be surprised, readers shouldn’t be.

Newsletters, like our friend Chuck Butler at the Daily Pfennig, regularly use Fed data to point out what is happening and where it will take us. For years Chuck has pointed out that the recovery was built on a mountain of debt, and consequences will follow.

The Fed needs more people with a PhD in good old-fashioned common sense.

Things are not going to improve anytime soon.

Our article, “When The Music Stops, Who Gets Stuck With The Bad Loans?” discussed the new UltraFICO score.

By changing the calculation method, credit scores could increase by as much as 20 points. This was designed to boost the credit scores of those who are young or trying to rebuild their credit.

For the automakers to sell more cars, they needed more buyers who would qualify for a loan. They changed the method of keeping score and viola! More buyers appeared creditworthy. Yeah right!

Who gets stuck with the defaulted loans?

Wolf Street tells us who does NOT get in trouble with the bad loans:

“Not the credit unions, with their clean loan book: only 0.7% of credit union auto loans are 90+ days past due. And not the small banks and the captive lenders.”

“It has been and is going to be a little rougher for specialized auto lenders – a number of which have already collapsed in 2018.”

I would encourage all investors owning mutual funds and loan packages to make sure you know what you really own.

The big banks move the default risk off their books, packaging and selling them. The loans end up in the retail sector – being hawked as safe and offering great returns. Many individual investors and pension funds will be surprised when defaults rise and the net asset value drops.

Funds market catchy titles like moderate, stable, etc. Don’t be fooled. Fund managers will take some risk to “goose” their numbers to attract investors. The bigger the fund, the more they earn in fees.

Don’t expect your broker to understand what each fund really holds, they just read the bullet points from the prospectus.

Remember the lessons learned from the movie “The Big Short”. Wall Street Guru Michael Burry reviewed many loan packages. He looked at the individual loans, concluding that many were bad, not rated properly, and their defaults would be catastrophic. He did his homework, placed his bet and made millions when it happened.

Can you trust the credit ratings? There are countless articles, like the NYT, “Ratings Agencies Still Coming Up Short, Years After Crisis”:

“The mistakes that led to the 2008 mortgage crisis can’t happen again, right?

Not so fast, particularly if you’re talking about credit ratings agencies like Moody’s Investors Service and Standard & Poor’s. Eight years after these companies were found to have put profits ahead of principle when they assigned high grades to low-quality debt securities, some of the same dubious practices continue to infect their operations.” (Emphasis mine)

Learn from past experience. When the music stops, investors don’t want to be stuck with any bad loans. Remember, the banks keep the good loans to keep the auditors happy.

Now is a good time to review your holdings, the music is slowing down. Let the Fed be surprised, we will know better. 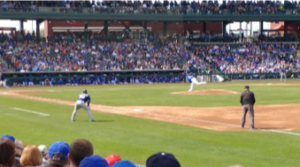 Last week we went to see three Cub spring training games. Their home park in Mesa, AZ is a terrific place to watch a game. Plenty of good parking, you are close to the field, most seats are in the shade, many clean restrooms nearby – and the food is actually pretty good (ballpark expensive).

Normally, for the first game of the year, I like to get there early, walk around the field and take it all in; particularly when it is a beautiful day. I look for familiar faces like Hall of Famer Ferguson Jenkins who has a charity booth and Mark the Beer Guy who has been a fixture for years.

Mark has his own baseball card and it’s hilarious…photo on one side and stats on the back. He opens left, pours right…. I don’t drink but enjoy chatting with Mark. I’ve not seen him yet. When spring training is over, Mark heads for Minneapolis where he pours beer for the Twins all summer.

About ten minutes into my stroll, something dawned on me. This is now my 75th year of watching the Cubs. I saw my first game in Wrigley Field in 1944. At one game, the lady behind me, with scorecard and Cubs shirt, was 91 and saw her first game in 1940, the year I was born.

When you spot a lady with grey hair and a scorecard, you can bet she knows the game.

This week’s humor is supplied by boyhood friend Tom G. who went with us to a game this week. We have been watching the Cubs together since we were kids.

An older gentleman was on the operating table awaiting surgery and he insisted that his son, a renowned surgeon, perform the operation.

As he was about to get the anesthesia, he asked to speak to his son.

Dad: “Don’t be nervous, son; do your best, and just remember, if it doesn’t go well, if something happens to me, your mother is going to come and live with you and your wife…”