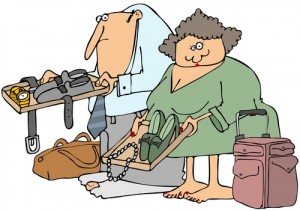 For many years I was a Road Warrior, gone all week. When there was a family event, I would try to catch an early flight home.

I was furious when the pilot announced in-flight delays anticipating we would land two hours late. The unhappy flight attendants candidly told us the air traffic controllers were initiating a slowdown because their ATC union was in wage contract negotiations.

Using air safety as the excuse, the air traffic controllers increased the aircraft spacing slowing down every flight in America. By disrupting travelers they created pressure on the government to meet their demands. We landed at an alternative airport, took on more fuel, and I got home at 3:00 AM.

“[W]e prefer to use the power of persuasion, but if that doesn’t work we use the persuasion of power.”

The ATC Union tactics were a blatant abuse of power and the public did not like it.

The TSA throws down the gauntlet

The Washington Post outlines the challenge, “TSA scrambling resources to deal with long lines at airports”.

“Congress has squeezed the TSA budget in recent years, reducing its airport workforce of about 45,000 by 12 percent. An additional 1,600 workers were slated to go this year before the new TSA administrator, Peter V. Neffenger, appealed for relief.”

The TSA has been controversial since the beginning. After the 9/11 terrorist attacks, the country was demanding beefed up airport security. The New York Times outlined the debate:

“Preparing for a politically charged battle over how best to protect the nation’s airports in the wake of the Sept. 11 attacks, President Bush… brought pressure on moderate House members today to defeat a plan to make 28,000 airport security workers federal employees.

Mr. Bush and House Republican leaders view having the government employ the airport security work force as an unwarranted growth in federal power and support a plan to leave the work in the hands of private contractors under government supervision and stricter standards.

…. Democrats are threatening to turn aviation security into a political issue and use it against Republicans in next year’s election. The(y)…started a Web site today called ‘unsafe delay,’ which…accuses Representative Tom DeLay, the majority whip, of holding up legislation that would make flying safer.”

The Democrats prevailed. In 2012, by a margin of 10-1, the TSA workers formally ratified a union contract that added around 45,000 members to the ranks of the American Federation of Government Employees (AFGE), a labor union representing over 650,000 employees of the federal government.

The Washington Examiner reports, “Unions Investment in Senate Democrats Pays Off”. Who can blame the unions? They donate millions helping their overlords get elected. They have had a symbiotic relationship with the democrat party for generations – nothing new about that!

The New American sums up why many travelers hate the TSA.

“Over the years, American taxpayers have been forced to shell out $57 billion to an agency that has made it unpleasant to travel. Many travelers have come to detest the agency, as groping and other grievances passengers have been subjected to have actually deterred people from traveling by plane.”

Recently the AFGE outlined their position:

“TSA currently has about 42,000 officers on the job, down from 47,000 in 2013. At the same time, the volume of passengers has risen 15% from 643 million to 740 million travelers. According to the Bureau of Transportation Statistics, the number of air travelers is projected to exceed 800 million in 2016.”

The TSA wants to add 6,000 more workers and the problem will magically go away.

“The agitators whine that TSA workers are not “respected” enough as a profession. “Morale for TSA officers is at an all-time low,” AFGE TSA Council President Hydrick Thomas complained….”We work very hard under some of the most stressful and dangerous conditions, but are treated like second-class employees as compared to the rest of the federal workforce. We just want equal treatment.”

They better be careful. “Stressful and dangerous conditions – treated like second-class employees as compared to the rest of the federal workforce”, sounds like the military – and they are not allowed to have a union!

To get some “boots on the ground” research I contacted a close Arizona friend (I’ll call her Sue). She and husband Tom recently flew to Chicago to attend their grandson’s graduation. They are both retired from the airlines, have all the proper credentials and can fly inexpensively.

Here is what they reported:

“We departed PHX and things went smoothly. As Sue recently broker her ankle, wheelchair service was brought to curbside. We told the TSA agent about her doctor’s instructions not to put any weight on her ankle. At no time was she asked to get up from the wheelchair. In less than 3 minutes we were on our way.

The return trip was a nightmare. The long delay getting to the head of the line became a minor issue. When we got to the security scanner, once again we advised TSA personnel that she had to remain seated and could not put any weight on her ankle. She has a metal plate, screws and pins in her ankle and metal in her boot. TSA agents insisted she get out of the wheelchair and walk through the metal detector, which of course set off the alarm. TSA then used a hand wand setting off alarms once again.

Sue asked to be taken out of the middle of the area and was told there was no place to take her as those places were filled. After some pleading they let her sit down in the wheelchair. She was told to take off her boot and it was run thru the screening device.

By now there are 7-8 agents surrounding her watching her full-body pat down; going into her hair, her collar, down her sides into her waistband.

While the search continued, Tom complained to a lady supervisor. Fortunately she got involved and Sue was allowed on through. The process was humiliating and took 20 minutes.

The supervisor also said the staff are “Very upset with the government giving many managers large bonuses, as much as $90K, for doing a great job and cutting staffing”.

I will let reader’s decide whether they are “protecting our safety” or if this is just another union power play to create public pressure.

A couple of years ago my wife Jo and I flew from Rockford, IL to Mesa, AZ. The airport had one commercial flight per day. We went through security quickly and hassle-free. Lately I have begun counting TSA workers in uniform that are just sitting and standing around doing nothing. I stopped at 15. I shrugged my shoulders and commented, “Our tax dollars at work!”

“Featherbedding” is defined as deliberately limiting production or retaining excess staff to create jobs or prevent unemployment, typically as a result of a union contract.

It’s time to stop the “politically correct” hassling of those like Sue who are no danger to anyone. If the unnecessary hassling of obvious non-threats stopped, the TSA could probably fire another 5,000 employees, provide better service and save a lot more money. Paying bonuses to managers to reduce unnecessary staff is money well spent.

Travelers are not powerless

Here are some things to do to reduce the hassle.

“The TSA cut its airport screener staff by 10% in the past three years, anticipating PreCheck would speed up the process. When not enough fliers enrolled, the agency tried to make up for that shortfall by randomly placing passengers into the express lanes. But it recently scaled back that effort for fear dangerous passengers were being let through. That’s when the lines started growing, up to 90 minutes in some cases.”

While we can debate the underlying reason for eliminating the random placement of passengers in the PreCheck line, law abiding citizens can make sure we are always in the short line.

The TSA provides this handy link explaining the program. As an incentive to fill out the forms and pay the $85 fee they tell us:

No need to remove:

I recommend even casual travelers sign up. The information you give the government is already known – the reduction of hassle is well worth it.

2. Review the TSA travel-tips. Inexperienced travelers cause many delays. Once an agent finds something the inspection process will be thorough and time consuming, delaying the rest of the line.

3. Come prepared. Many lessons are learned the hard way. I was asked to remove my belt and place my hands over my head and walk through the scanner. Being 50# overweight, let’s just say I would have made the Plumber’s Hall of Fame. I bought elastic waist sweatpants for the trip home.

While the unions and government can flex their muscles, the public resents the hell out of being the pawn in their game. A perfect flight is described as “uneventful”. Take some proactive steps to make it so. Safe travels!

After attending grandson Braidyn’s ball game Jo complained about the increasing sharp pain in her back. Fearing a kidney stone, we went to the emergency room. It took a few hours and the good news is it was a muscular issue. A dose of happy pills seems to be doing the trick.

Both of our cell phones were down below 30%. Thankfully I had my Portable Charger in the car. What an amazing gadget, not only were both phones back up to 100% quickly, the charger still had 55% power remaining.

It’s a good gadget to have. You can help us out by clicking HERE and ordering through Amazon. Your prices are the same and we get a small stipend which helps us keep the website free.

I’ve been reluctant to mention my beloved Chicago Cubs are off to their best start in my lifetime. The last time they won the World Series was 1908.

Cub fans know to temper their enthusiasm because something bad always happens. Former manager, Lou Pinella called it “Cubby Occurrences”. Cub fans may scoff at the well-known Curse of the Billy Goat, however deep down many fear the familiar “here we go again” feeling.

I chuckled at a quote from legendary Chicago newspaper reporter Mike Royko;

—-A Pessimist sees the glass as half empty; A Cub Fan wonders when it’s gonna spill.

One of the most popular shirts I saw in spring training said, “Just once in my lifetime!” Amen to that! I saw my first Cub game in 1944. I’m ready for them to break the curse.