The Bond Market Is Nuts! 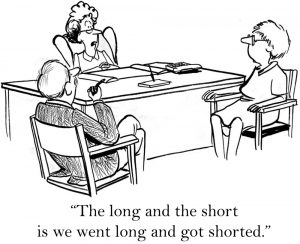 The bond market is absolutely nuts – devoid of any common sense.

Back in the days when professors used chalkboards, and actually taught classes, I studied Business Economics. We learned how capital and labor come together to produce goods and services, create jobs and profits. If capital was needed, you could borrow and pay interest. Interest is the rent you pay for using other people’s money.

Thanks to government intervention, that fundamental premise has been blown apart. I pulled up a recent quote from my online broker: 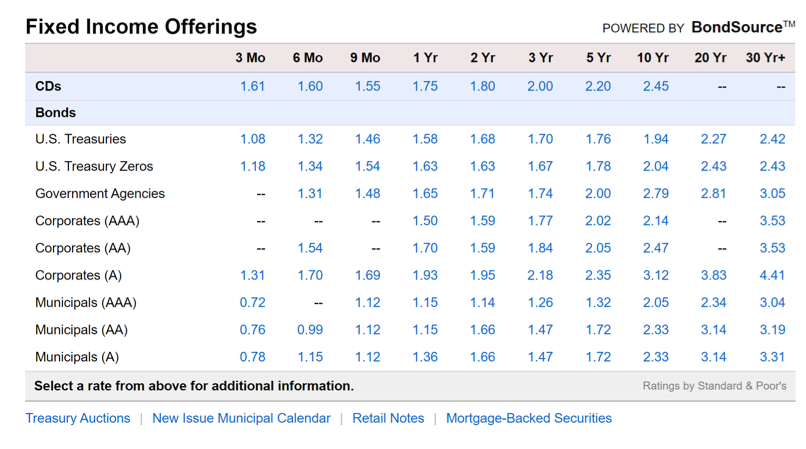 The risk/reward proposition is upside down. Theoretically, government bonds and Certificates of Deposit (CD’s) have the least amount of risk and therefore should have the lowest interest rates. Corporate bonds are rated by various agencies and risk is assigned accordingly.

Let’s look at the 10-year offerings. Top-quality AAA corporate bonds are paying 2.14%, CD’s are paying 2.45% and other government agencies are paying 2.79%. The highest risk pays the lower interest?

Do you trust the rating agency?

“Many credit rating agencies…are paid by the…issuers of the securities they rate. This creates a potential conflict of interest…the credit rating agency may be influenced to determine more favorable (i.e., higher) ratings than warranted to retain the obligors or issuers as clients….”

Is the extra $33 worth the risk when you are unsure of the credit rating?

“Bloomberg News delved into 50 of the biggest corporate acquisitions over the last five years, and found…By one key measure, more than half of the acquiring companies pushed their leverage to levels typical of junk-rated peers. But those companies, which have almost $1 trillion of debt, have been allowed to maintain investment-grade ratings by Moody’s Investors Service and S&P Global Ratings.

It’s estimated that $2.5 trillion is invested in BBB grade bonds. Bloomberg warns over $1 trillion should be rated as junk bonds, but are not because of “lofty promises”.

I call BBB bonds, “Bottom of the Barrel” and I sure don’t trust the rating agencies.

The Fed and world central banks are buying bonds, keeping interest rates at historically low levels. In a free market, the huge availability of debt would push rates to a more realistic risk/reward ratio. Because of central bank intervention, many government and corporate bonds now offer zero to negative interest rates.

Wolf Street reports, “Negative-Yielding Junk Bonds Have Arrived in Europe”, “The total amount of bonds with negative yields has risen to nearly $13 trillion.”

Zerohedge tells us, “A third of All European Investment Grade Bonds Have Negative Yields”.

Currency expert Chuck Butler recently told us, “I do believe the Fed will get around to having negative deposit rates, but not negative-yielding bonds… Of course, the severity of the next depression will dictate if bond yields go negative or not.”

If that is not nuts, I don’t know what is. My grandmother was better off when she hid her cash in a Mason Jar!

Who is fool enough to buy the zero to negative interest bonds?

Wolf Street tells us why there is a market for these lousy bonds:

“In a negative-yield environment,…you’d be guaranteed a loss. You’d have to buy them solely on the hopes of even more deeply negative yields in the near future that would allow you to slough off these critters to the next guy before they eat you up.”

Buying bonds in anticipation of interest rates changes, in order to sell them in the future for a profit is speculation – not recommended for retirees. Speculators are betting on what the government is going to do in the future.

Bonds used to provide safe, reliable fixed income; particularly for retirees. You would buy a bond, collect the interest and hold it to maturity. That is called investing.

The amount of increase/or decrease is called “duration”. It is based on the interest rate and remaining life of the bond. If you want more information, Investopedia has provided a Duration calculator. That is for speculators.

Retirees should be investors. If you buy a bond, you should plan on holding it to maturity and collecting the interest along the way. The changes in resale value of their bond is really not important (unless there is an increasing probability of default), you plan on getting your money back when it matures.

How’s it working out for the speculators?

“…. The Fed has cut its interest rate target twice, by a total of 50 basis points, and short-term Treasury yields have fallen by about that much.… The one-month yield now down to 1.56% and the 10-year yield up at 1.94%…. (Emphasis mine)

…. For holders of long-term bonds that they bought with negative yields, it is a very unpleasant experience when prices of those negative-yielding bonds also drop. And that’s what they’re facing now.

…. Investors are having to absorb a flood of government and corporate debt coming on the market in the US, Europe, and elsewhere, looking for buyers.”

The mountainous amount of negative-yielding debt had peaked at a mind-bending $17.03 trillion on August 29, but has since then plunged by $5 trillion,…to $11.94 trillion…still a huge gigantic amount of sheer absurdity….”

Big boy speculators bet over $17 trillion on the idea that interest rates would go lower, which they have, yet yields have increased. The resale value of the bonds decreased while they still pay the borrower to use their money.

If yields dropped would they be guaranteed a profit?

The speculators think so, or they wouldn’t have risked trillions. Could this work for the average retiree trying to make their 401k last?

When the government bailed out the banks in 2008, many investors were shocked when banks and bondholders called in their debt. We didn’t experience the rise in value of our holdings as they were called in (legally) by the debtor.

What happens if negative rates were to double? Can the borrower just call in the debt and then lend it back out at an even better negative rate for them?

I went to my online broker, researching available bonds. My search criteria were high investment quality, non-callable bonds maturing between November 2020 and December 2029. Here is what popped up on the screen:

Note the last line, “There are no bonds which meet your search criteria…” There are some resale, non-callable bonds available. You need to be very selective in finding good ones.

That callable feature protects the borrower at the lender’s expense and changes the risk/reward scale dramatically.

Here is the real bet:

As we learned in 2008, there is a point where the borrower finds it very profitable to call in the debt and re-borrow at a more favorable rate for them.

You may resell your bonds at a profit but the potential for extraordinary gains is capped. The borrower WILL call in the bonds before that happens.

The entire bond market is nuts!

Currently, CD’s are paying interest close to higher risk bonds. Non-callable, resale CD’s are available online. Leave the speculation to others. Your money is FDIC insured and you will sleep better at night.

I hope everyone had a wonderful Thanksgiving holiday. We enjoyed a casual dinner with our friends, the Carlson’s. It felt like the day after Thanksgiving someone flipped a switch and the pace really picked up for Christmas.

TV commercials were all pushing Black Friday pricing. My friend Bob O. has a theory about saving money on Black Friday – don’t leave the house or turn on the computer and you will save a lot of money.

If you didn’t get to take advantage of some Black Friday pricing, don’t let the fear of missing out (FOMO) bother you. Soon there will be year-end pricing. Many retailers take inventory at the end of January so there will be some real bargains.

For those who use Amazon, please help us out by going through our Amazon paid link for your purchases. Their small stipend helps us offset our costs.

Jo sent me a terrific commercial. For those of us who remember ET, this is a wonderful message and they are not selling anything.

We will share some observations from friend Bob O. to close out the week: