The Colleges Are Training Tomorrow’s Board Room Executives 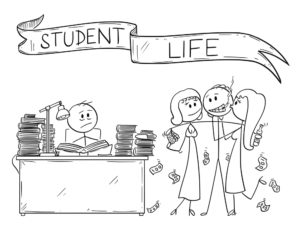 Good friend Ronnie (fictitious name) has owned a popular bar near a prestigious university for decades. He has me convinced the colleges are doing a great job of preparing the executives of tomorrow.

As I sipped on my iced tea, I noticed young folks in line at his cash machines waiting to withdraw cash. I asked, “why two machines?” He told me when they get packed the lines are long.

He continued, “It’s very common to see the same credit card being used to withdraw $20 bucks 3-5 times a night.” He continued, “We sell $20 buckets of beer. Every time it’s their turn to buy they go to the cash machine, take out $20 and order another bucket. What do they teach them in college?”

I was astounded! I said, “Someone gets the credit card bill; you think their parents would ask about it.” He laughed; “Come visit on parents’ weekend and you will see many of their parents doing the same darn thing.”

I told Ronnie I had written about student loans. Many creative college kids were buying books with student loan money, then immediately selling them back as used books to the bookstore for cash – beer money!

He grinned, “Years ago, near the end of the semester, the bookstore had a bunch of vans that looked like the old bread trucks. They would buy used books from the students. We decided to advertise ‘Books for Beer’. Students would bring their books to us. We would buy them in exchange for beer, then we took them over to the bread truck and sold them.”

Ronnie is a creative genius.

What a great lesson for these young people. They are learning the value of “instant gratification”. Go to a cash machine, charge your credit card, get about $.80 on a dollar, party all night and worry about it later. If you are lucky, maybe someone else will clean up your mess.

Do you have to be in the MBA program to learn to pay the minimum balance each month? If you hit your credit limit, just get another card and continue the process – party on!

The government – the greatest cash machine of all.

With a generous corporate tax cut and historic low-interest rates the government fueled the corporate cash machine beyond anything mankind has ever seen. Michael Pento outlines the theory behind why:

“The Fed pumped money into the economy thru its various Quantitative Easing programs to force interest rates to near zero percent, with the expectation corporations would borrow money at the lowest rates in history and then invest in their businesses in the form of Property Plant and Equipment (capital goods). This, in turn, would expand productivity and help foster a low-inflation and strong growth environment.”

Corporate America hit the cash machine in historic fashion. In the last decade, the amount of corporate bonds has almost doubled to $9 trillion. The government plan fell short.

Mr. Pento details how many executives harkened back to their college days and hit the giant cash machine, for their own benefit with little regard for the future:

“But many corporate executives found a much more enticing path to take in the form of EPS (Earnings Per Share) manipulation. That is, they boosted both their companies share price and, consequently, their own compensation, by simply buying back shares of their own stock.

…. The volume of debt-sponsored buybacks over the past few years is putting many companies at an extreme level of risk. According to Bianco Research, 14% of S&P 500 companies must now issue new debt just to pay the interest on existing debt. …. The Zombie companies are actually Ponzi schemes that can only continue operations in a near zero-percent interest rate environment; and if the credit markets remain liquid….”

‘There is only one combination of facts that makes it advisable for a company to repurchase its shares: First, the company has available funds – cash plus sensible borrowing capacity – beyond the near-term needs of the business and second, finds its stock selling in the market below its intrinsic value, conservatively calculated.’

…. Whitney Tilson of T2 Partners LLC, following Buffett’s advice, uses the following rule of thumb: if the stock is trading within 20% of fair value, then the company should use dividends; if it’s trading at greater than a 20% discount, buybacks. If it’s trading at a big premium to fair value, then the company should issue stock, via compensation to employees, a secondary offering, and/or as an acquisition currency.

But that isn’t what is currently happening as is demonstrated by Q1’s record-breaking buybacks. Buybacks are occurring when prices are at or near cycle highs, not near lows as required by Mr. Buffett’s sage advice.”

This Investopedia article, “6 Bad Stock Buyback Scenarios”, is an excellent primer. Here are my favorites:

“To Benefit Executives”: (my emphasis)

“Many executives get the bulk of their compensation in the form of stock options.

By…keeping EPS up, buybacks are a convenient way for executives to maximize their own wealth. …. Some executives may even be tempted to pursue share buybacks to boost the share price in the short term and then sell their shares. What’s more, the big bonuses that CEOs get are often linked to share price gains and increased earnings per share, so they have an incentive to pursue buybacks even when there are better ways to spend the cash or when the shares are overvalued.”

“Buybacks That Use Borrowed Money”:

“For executives, the temptation to use debt to finance earnings-boosting share purchases can be hard to resist, too. …. When done with borrowing, share buybacks can hurt credit ratings, since they drain cash reserves that can serve as a cushion if times get tough.

…. However, debt has to be repaid at some time. Remember, what gets a company into financial difficulties is not lack of profits, but lack of cash.”

In the short term, they may be looked on as heroes. Investopedia reports “5 Buyback Leaders That Are Posting Huge Stock Gains”:

SEC looks behind the curtain

“…. Jackson’s office looked more closely at 385 stock buybacks over the last fifteen months. A big red flag according to Jackson is that a lot of executives use stock buybacks as a way for them to take profits.

“What did surprise us, however, was how commonplace it is for executives to use buybacks as a chance to cash out. In half of the buybacks we studied, at least one executive sold shares in the month following the buyback announcement, …. In fact, twice as many companies have insiders selling in the eight days after a buyback announcement as sell on an ordinary day. So right after the company tells the market that the stock is cheap, executives overwhelmingly decide to sell.”

“If executives believe a buyback is the right thing to do, they should hold their stock over the long term. Instead, we found that many executives use buybacks to cash out.

That creates the risk that rather than the long-term needs of investors, employees, and communities – it’s insiders’ own interests that are driving companies’ buyback announcements.”

Corporate America hit the cash machine by selling low-interest bonds that may mature in 10-20 years. They took their cut and continue to party. Much like a credit card, they only pay the interest on the debt and leave the mess to someone else in the future.

John Mauldin reminds us in his weekly “Thoughts from the Frontline”:

“You must understand that 75% of today’s wealth is in the hands of retirees and pre-retirees. Most have a significant portion of their money in index funds, and they’re going to see a significant erosion of their retirement assets.”

If 14% of the S&P 500 is Zombie companies, erosion might have to be replaced with destruction. When the bills come due, there will be a mess.

This 2016 article is excellent, listing 60 companies who borrowed money to buy back stock.

I recently wrote about how former GE president Jeffrey Immelt borrowed money to buy back stock, ignored unfunded pension liabilities and lost over $18 billion in the process. It’s estimated he walked away with at least $112 million for his fine performance.

Never fear. The universities are training next-generation executives in the art of using a cash machine for “instant gratification”, and letting someone else clean up their mess.

Corporate America should be asking Ronnie to help them recruit these top management candidates. They should be given signing bonuses and put on a fast track to the executive levels as quickly as possible. Party on!

Some may have gone into politics. How soon before some of these young hotshot politicians runs on a “free beer” platform?

Last week I mentioned we started a garden with small cactus with the idea of replanting them in the back yard.

Our little plants are growing like mad and now blooming. A blooming cactus garden is beautiful in the spring, but not when they are growing into other plants.

Each month our new landscaper is relocating some of our former baby cactus to wider spaces in the yard; we are quickly running out of room.

I wanted to be sure to thank all the readers who use our link for their Amazon purchases. That helps us offset our cost and is much appreciated.

I’ve received many very kind notes from readers when I mentioned my cancer issue. On Monday I started a 7-week (49 days) chemo/radiation treatment program that has a terrific history of success. It’s like a job, getting up and going in five days a week. I’m checking off the days on the calendar each morning.

At 79, I look around and realize that cancer is almost a “rite of passage.” A significant number of friends have had to deal with cancer at some point in their life; many for a decade or more. We can be thankful for modern medicine.

I will miss my grandson Braidyn’s graduation from grade school this month. I told him I plan on seeing him and his younger brother Brock graduate from high school – and hopefully college.

Thanks to all the readers who have sent along kind thoughts and encouragement.

The Cubs played here the last weekend in April. We went to the Sunday game. My wife Jo is a trooper, kept score as we sat through all 15 innings of an exciting game. Here is her favorite: