The Disease Or Cure? Take Your Pick! 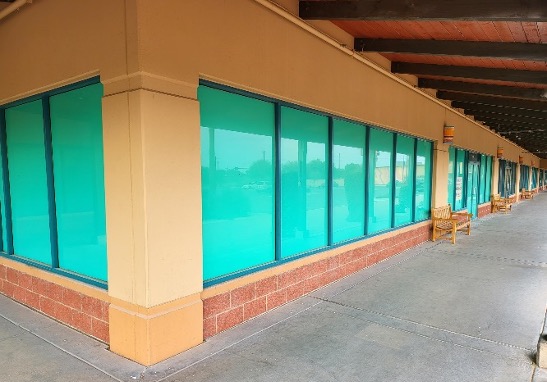 Since I began my cancer treatment in 2019, my outside travel has been curtailed. Doctors, restaurants, and an occasional trip to visit family have been about it.

The good news is now I have more energy and feel like getting out and doing fun stuff. I recently made a trip to our local Factory Outlet Mall. I used to enjoy window shopping and eating in the food court. I was shocked, and unhappy with what I found.

The mall used to be full of cool stores, bustling with traffic. The photo is disheartening. I’d guess 40% of the stores are vacant. Stores closing, people losing jobs, landlords hurting, mortgage and bonds defaults are happening for the wrong reasons. It’s upsetting, but I realize there is not a damn thing we can do about it. We are on our own….

Former congressman Ron Paul believes the cause of our economic problems is central banking:

“It is amazing that more individuals do not question the idea that inflation, recessions, unemployment, and booms and busts are necessary features of a sound monetary system. Even many otherwise staunch defenders of free markets maintain a child-like faith in central banking. …. These conservatives do not understand that the problem is the existence of a central bank with the power to manipulate the currency.”

Irresponsible politicians, coupled with central banking, is a cauldron for the economic problems we face today.

Academics believe in Keynesian economics. Keynes believed government spending should help thwart a bad economy and get it turned around. He also felt during good times, government revenue should exceed expenses and the surplus should be used to pay down debt.

Great theory: however, politicians of all flavors are incapable of curtailing spending and paying off debt. They use surpluses and debt to spend more to buy votes and maintain their power.

Government debt skyrocketed over the last 40 years. The politicos make no attempt to balance the budget.

The Fed was created under the cloak of secrecy in 1913. Private banks became the country’s central bank. It didn’t take long before banks began making high risk investments, failed, and we ended up in the Great Depression.

In 1933, the Glass-Steagall act was passed separating investment banks from commercial banks. Since then, no depositor ever lost money, nor any bank bailouts. Much like immunotherapy, designed to keep my cancer in check, Glass-Steagall did the same for the central banking system. 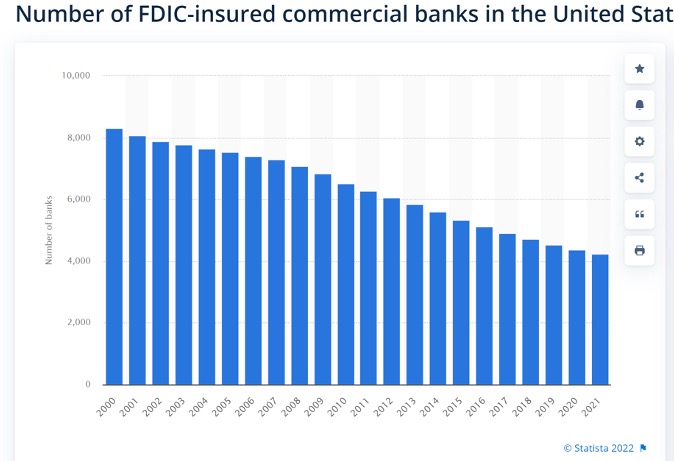 Five huge banks control almost half of the wealth of the nation. These private banks OWN the Federal Reserve.

Within a decade, these casino-banks were in jeopardy. They made bad investment decisions. In 2008 the government deemed them “too big to fail” and taxpayers bailed them out – several times as more quantitative easing followed.

“The problem in a nutshell is that between the post-dotcom crash and subsequent money printing spree and flood of central bank credit in 2020, global central bank balance sheets soared from $4.7T to nearly $42 trillion. That 9X increase in money supply brought only a 2X growth in GDP. The rest went into the pockets of the elites and created asset bubbles now at risk of popping.”

“Well-connected members of the financial elite and crony capitalists benefit from the Federal Reserve’s money creation, as they are the first recipients of the new money. This enables them to increase their purchasing power before the new money has caused general price inflation. By the time the money creation has impacted the middle and working classes, the economy is racked with widespread price inflation. Therefore, a nominal gain in wages is not enough to compensate for the real price increase. So average Americans suffer from both Fed-created inflation and the Fed’s attempts to rein in that inflation.”

“The masses have been cheated, deleted and mistreated….

In a nutshell…while the wealth of the crème de la crème was teased up by the feds…the working class – which is most of us – got nothing. The top 1% added $36 trillion in wealth since 1999 – or about $3 million per person. The bottom 50% added wealth too, but only about $13,000 each. Each person at the tiny top got 230 times more money than those at the broad bottom.

But all that froth came at a cost. …. The result was $50 trillion worth of debt added to the US economy since 1999.

Who will pay for it? We ‘the people,’ of course. That is what the ‘inflation tax’ is all about.”

…. In the three quarters when JPMorgan Chase was on a secret feeding tube from the Fed via the Fed’s emergency repo loans and other emergency programs, the bank bought back the most stock in its history….”

…. According to an analysis by Lenore Palladino for the Roosevelt Institute, buybacks work like this:

“…. Stock buybacks occur when companies purchase back their own stock from shareholders on the open market. …. This reduces the amount of outstanding shares in the market …. The value of the stock goes up, as a result of a stock buyback, but without making the kinds of changes that would improve the actual value of the company….”

“One of the major problems with stock buybacks is that corporate executives often hold large amounts of stock themselves, and their compensation is often tied to an increase in the company’s earnings per share (EPS) metric. That gives executives a personal incentive to time buybacks so that they can profit off of a rising share price. …. That means that the decision of whether and when to execute a stock buyback can affect his or her compensation by tens of millions of dollars. Despite these facts…the rules that govern how the company authorizes stock buyback programs fail to account for this significant conflict of interest.

The decision to authorize a new stock buyback program is made by the board of directors, including interested directors (those who hold significant shares of stock). …. There is no recourse to hold directors accountable for extremely high repurchase programs….”

“Artificial inflation of JPMorgan Chase’s share price through buybacks might explain why the stock market has shrugged off five felony counts brought by the Justice Department against the bank since 2014 as its Board kept the same Chairman and CEO, Jamie Dimon, in place throughout the crime spree.”

What does this mean to the working class?

Wages have not kept up with inflation. Things cost more, it is even more difficult to save, and the destruction of much of the middle class is underway. Baby Boomers, who are either retired, or soon hope to, face a daunting challenge.

Spectruminvestor.com has a cool website, “How long will my retirement savings last?”

Let’s assume Joe Smith, hard working baby boomer is 67 years old and wants to retire. He saved $1 million. He feels he needs $50,000 plus his social security to maintain his current lifestyle. He assumed he would earn an after-tax rate of return of 4% and inflation remained at the government reported 8.3%. Here is the result: 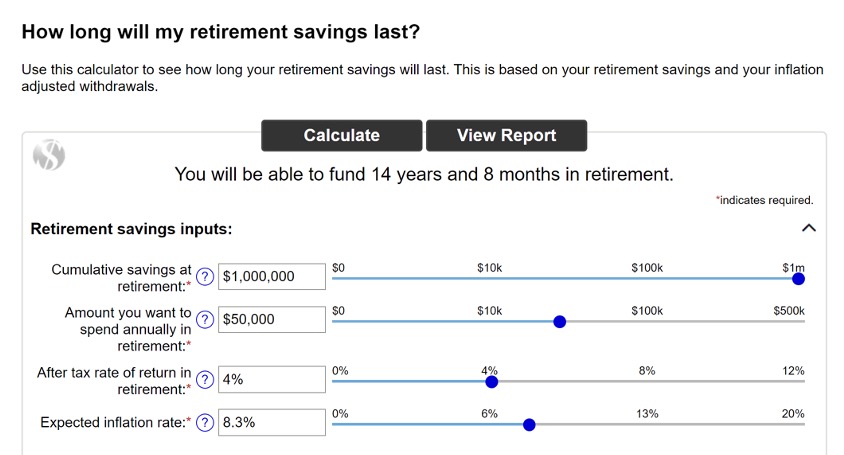 Joe’s likely to run out of money before he is 82; his retirement dreams are in trouble. He has a 50/50 chance to outlive his money.

The disease is rampant inflation, caused by the government. Government debt is over $30 trillion (coupled with $170 trillion in unfunded political promises – expect cuts in social security!). Congress has NOT done their job of overseeing the Federal Reserve. Our nation is on life support, severely infected with double digit inflation.

I’m 82 and have friends getting financial help from their children. An AIG Life & Retirement survey reports that 59% fear running out of money more than they fear death. Those fears are real!

“The dollar’s reserve currency status is on its way to being a thing of the past.

…. If the dollar goes down, of course, the inflation goes even higher.

…. There is simply no way out. We have to crash. We have to get a depression. The whole economy will have to start all over again.”

“Can 12 government hacks, working for a private bank, actually guide – and improve – a $24 trillion economy?”

Can we expect congress to magically become responsible adults?

If inflation is not brought under control, a total collapse and another Great Depression is likely. The middle class will be history. Expect scary social unrest.

Next week, part II. Is the cure worse than the disease?

Last week Jo and I drove across the country…at least the part from the mountains to the prairies, we stopped before getting to an ocean.

When we left Indiana a month ago, the crops were lush and green. Now they are turning brown, and we saw several combines harvesting a good grain crop.

Our favorite billboard said, “Road calories don’t count!” It was an advertisement from a local fudge shop. Wish I had turned around and snapped a picture….

Jo is from a small town, New Harmony, IN. On Saturday we went to their annual event, Kunstfest. It is a huge street fair with plenty of hometown booths, arts, crafts, food, you name it. It was very crowded.

Even though Jo left New Harmony decades ago, she always seems to run into some old friends and they stop and chat. That’s part of the fun of coming home, even as a senior citizen. 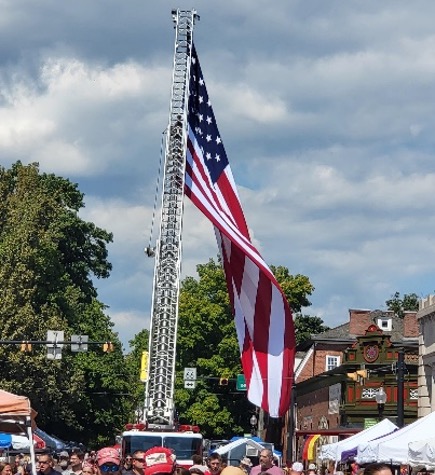 I LOVED the first thing I saw as we came into town. It is one of the biggest flags I have ever seen, suspended from the ladder of the town fire truck.

New Harmony isn’t big enough for a stop light, but the flag is flying in the intersection in the middle of town. New Harmony is where the Wabash River intersects with the Ohio River so you can only come into town from the north and east. It is clearly visible to all as they enter the little town. 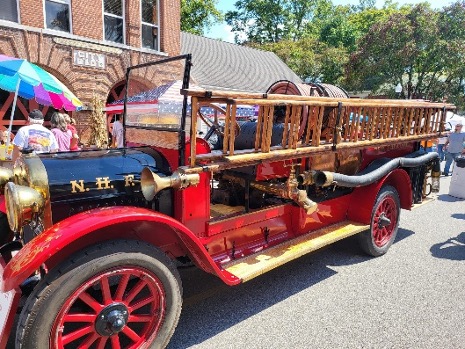 I also enjoyed the old fire truck, 98 years old and completely restored. In the early 1920’s a fire could wipe out the entire town. The great Chicago fire was in the 1870’s, killed over 300 people caused extensive damage. Even way back then, taxpayers were willing to spend the money to protect themselves from the ravages of a deadly fire.

Friend Rob G. shares some clever definitions for our enjoyment: