The Fed’s Dilemma Is Our Problem! 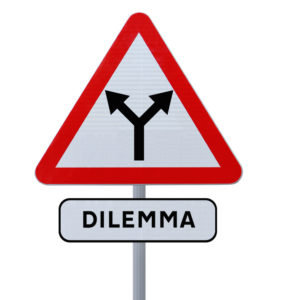 “Most likely, the stock market will crash sometime before the 2020 election. We can’t know when.

…. The end of the stock market boom, too, is unpredictable. But each passing day brings us a day closer to when it will crash and burn.”

Bonner’s prediction is in line with our 2017 article, “An Economic Showdown Is Looming”. I suggested the Fed, part of the deep state, was setting up President Trump to be another Herbert Hoover. The deep state wants the market to crash so they can crush capitalism and further consolidate federal government control.

Fed Chair Yellen announced the Fed would begin raising rates in 2015. After one early increase and she held off until after the election. Despite Ms. Yellen’s vehement objections to the politics of holding off on rate increases before the election, it sure looked political.

“Would I say there will never, ever be another financial crisis? …. That would be going too far but I do think we’re much safer and I hope that it will not be in our lifetimes and I don’t believe it will be.”

“Not every business cycle is going to last forever, but no reason to believe this cycle can’t go on for quite some time, effectively indefinitely.”

The underlying Fed message – Bush broke it, Obama fixed it, and now Trump is responsible.

The Fed has a symbiotic relationship with congress, enabling them to spend without consequences. In return, congress allows the Fed (owned by member banks) to create the illusion of acting in the best interest of the public while bankers make billions.

“…. On average, JPMorgan analysts say, the three news conferences hosted by Powell to clarify Fed rate-setting meetings have heralded an average 0.44 percentage point drop in the S&P 500…and those losses have totaled some $1.5 trillion so far….”

The losses were temporary as the market rebounded – so far!

“A crash in the stock market now would immediately be followed by a recession. Unemployment would soar to 8%… maybe 10%. The Dow would be cut in half.”

The World Bank estimates the market capitalization of listed domestic US companies to be a little over $30 trillion. JP Morgan math must be taking into consideration a whole lot of other investments that would be affected by a market decline.

Pension funds and 401k’s are already in deep trouble. A sudden, major market drop would destroy much of the remaining wealth of all Americans. No president would be likely to survive that kind of catastrophe. Politicians of all flavors should fear citizens storming the castle.

“The International Monetary Fund has presented us with a Gothic horror show. The world’s financial system is more stretched, unstable, and dangerous than it was on the eve of the Lehman crisis.

…. Even a moderate shock would cause company “debt-at-risk” – that is, where the debtors do not earn enough to cover interest payments – to spiral up to $19 trillion. This is a staggering 40 percent of corporate liabilities.

…. Pension funds and insurers that used to act as a stabilizing buffer in financial crises are now part of the problem and might next time join the panic rush for narrow exits.”

While the Fed might be part of the deep state, their primary purpose is to protect the banks and their profits. If the goal is to create another Great Depression to oust the president, how much will it cost the banks to get the job done?

The Institute for Local Self-Reliance provides a graphic showing just how big the Giant Banks Are. 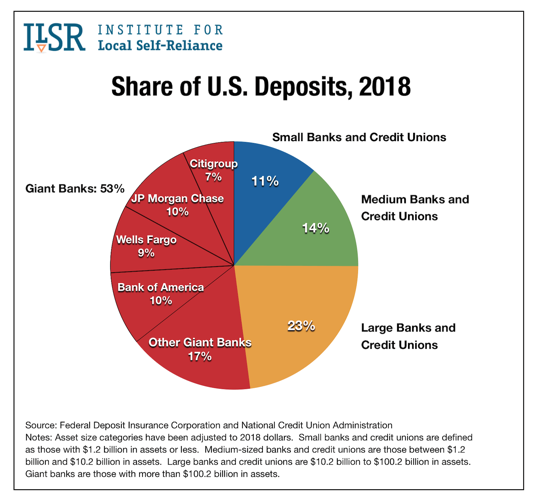 The top banks control 53% of all bank deposits. In 1999 the Clinton administration repealed the Glass-Steagall Act, allowing banks to turn into investment (casino) banks.

The concentration of wealth has been mind-boggling. There are around 4,500 banks, down from almost 9,000 in 1999. 35 banks hold assets over $100 billion. The remaining 47% of banking assets are distributed among the other 4,465 banks. Who do you think the Fed listens to?

The big casino banks are now primarily investment and brokerage houses. Statista tells us there is approximately $18 trillion invested in mutual funds.

Average fees for equity funds are .55% and actively managed funds .76%. Estimating an average fee basis of .60%, should the market drop in half, $9 trillion, Wall Street would lose $540 billion in fees annually.

Using JP Morgan math, destroying over $50 trillion in wealth would cause a race for the exits and liquidity crisis, unlike anything the world has ever seen.

“…. A derivative is a legal bet (contract) that derives its value from another asset, such as the future or current value of oil, government bonds or anything else. …. A derivative buys you the option (but not the obligation) to buy oil in 6 months for today’s price/any agreed upon price, hoping that oil will cost more in the future. (I’ll bet you it’ll cost more in 6 months). Derivatives can also be used as insurance, betting that a loan will or won’t default before a given date. So, it’s a big betting system, like a Casino. …. The system is not regulated what-so-ever…. (Emphasis mine)

Most large banks try to prevent smaller investors from gaining access to the derivative market on the basis of there is too much risk. The derivative market has blown into a galactic bubble, just like the real estate bubble or stock market bubble. …. While derivatives are traded in microseconds by computers, we really don’t know what will trigger the crash or when it will happen, but considering the global financial crisis this system is in for tough time, that will be catastrophic for the world financial system.”

JPMorgan Chase will likely argue that they have also purchased boatloads of credit derivatives, which might be on the same entities, but there is no way for anyone to accurately predict if this mega bank has aligned these risks correctly. Even the bank admits that, writing in its 10K the following:

As mentioned, “Even a moderate shock would cause company “debt-at-risk” – that is, where the debtors do not earn enough to cover interest payments – to spiral up to $19 trillion. This is a staggering 40 percent of corporate liabilities.” What’re the chances of JP Morgan Chase bond derivatives going belly up?

While the casino banks hold almost $229 trillion in derivatives, someone holds the other side of the bet. There will be a winner and a loser.

I’m reminded of the time we camped next to a small casino in northern Minnesota. I went to the craps table, got hot, and made $3,000. I went to cash out and the cashier said, “I don’t have the money!” I freaked out for a moment and she said, “I have to go upstairs to get it.”

The Fed’s dilemma is this. Are the banks willing to absorb mind-boggling losses to allow the market to crash for political reasons, hoping for another bailout? Will they continue with more QE, fueling bank profits while driving interest rates down?

Either choice is going to hurt the average American.

The Fed may have decided to keep the illusion going.

A year after Mr. Powell assured us, “…. No reason to believe this cycle can’t go on for quite some time, effectively indefinitely”, he has quickly reversed course.

Unless there is massive public outrage, the thought of allowing the casino banks to eat their own losses, and change the law to separate investment banks from commercial banks will not be considered.

Congress will protect themselves and the banks. After the 2008 crisis, they passed laws creating the illusion of fixing things. If you think the political upheaval is bad now, just wait, its gonna get worse! It’s just a matter of time… 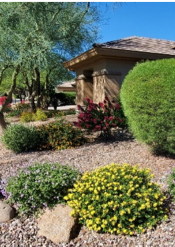 Thanks to the many readers who dropped me a note saying welcome back. Reader David A. sent a clever comment, “Nice to see you haven’t lost your touch, just your taste!”

Reader George B. suggested, “I go outside and enjoy some of the Anthem sunshine!” I told him this is one of the most beautiful times of the year in the Arizona desert.

While much of the country is experiencing fall colors, leading into winter, our world is alive with beautiful color. I will confess, since the cancer diagnosis, I am appreciating this natural beauty even more.

I chuckled when he responded, that he “got a little hot and sweaty shoveling 4″ of global warming that fell overnight in the suburbs of SW Denver!”

When we moved from Illinois in 1977, we sold our snowblower and never looked back. If God wanted me to be cold, I would have more fur.

I was catching up with friend, and affiliate, Tim Plaehn, who runs the Dividend Hunter (affiliate link). He sent me several pages of terrific testimonials… all of them unsolicited. Here is one that grabbed my attention.

“I subscribed to The Divided Hunter after I sold a house and inherited a moderate amount of money. I used your service to make choices on how to invest the money. …. I have received enough dividend income so that my wife was able to quit her job and stay home with our son. He is now turning five and going to kindergarten. Without the dividend income over the last couple years this would not have been possible.” – Mike S.

Wow! It’s sure easy for me to be comfortable endorsing his publication when his readers take the time to send in unsolicited comments like that. I suggest you check it out here (paid link).

A few readers mentioned they enjoyed Tom G’s “Puns for those with a higher IQ”. Here are some more that I enjoyed:

I walk into my wife Jo’s office and it is full of Christmas paper. Signs of things to come…