The Fed’s Disaster Has Arrived! 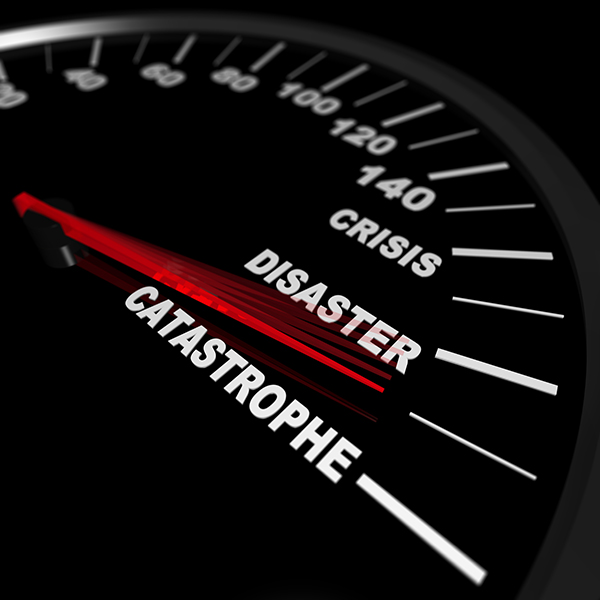 Inflation is no longer a coming attraction, it’s here, turning into a disaster, and not about to go away anytime soon.

Shadowstats.com tells us current government-reported inflation is over 8%.

Using Carter year calculations, it’s over 16%. Our wealth is being stolen at a rate none of us have seen in our lifetimes. 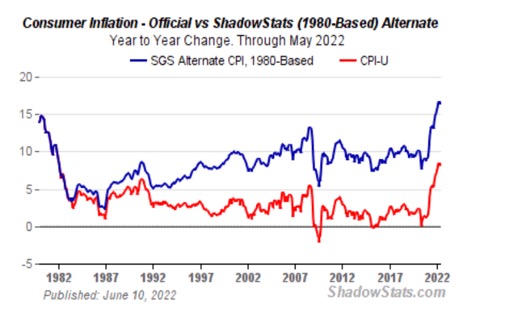 Immediately after finishing our article, Are We Really Screwed? I received the current edition of Richard J. Maybury’s US & World Early Warning Report®. It’s an eye-opener.

I’m a long-time subscriber and met Richard a few years ago. He has a unique background and perspective on government that is not found elsewhere. He combines that with history and a “straight shooter” style that is easy to understand. If you want to know what is really going on, and what to do, his current issue is a must-read.

“The Fed’s disaster has arrived.

“There is hardly anything as important to our economic well-being as the supply of money. The supply is controlled by the Federal Reserve…which acts as the government’s central bank.”

“…. When the supply of dollars goes up, the value of each individual dollar goes down, and prices rise to compensate.

“Goods and services are not going up, the dollar is going down, because the politicians and bureaucrats have gone wild creating money out of thin air. The most important function of money is to be a store of value, and these days that is exactly what money is not.

“…. A recent survey…. Shows about 83% of Americans describe the economy as poor or not so good, 86% said the country is greatly divided over the most important values, and 17% are satisfied with their financial situation – the lowest since the survey began in 1972. …. Fear of rising prices is rampant.

“This is the stuff rebellions and revolutions are made of.

“…. My reading of American history convinces me that except for the Civil War, today’s split is the most serious since that of 1776.”

“Webster’s Dictionary had always defined inflation as an increase in the money supply. Then in 2003, it changed the definition to mean a rise in the general price level.

“The difference might seem subtle, but it’s not. It’s a deliberate deception. …. Price increases do not cause inflation. Instead, an increase in the money supply – inflation – causes prices to increase.

“Defining inflation as a rise in prices gives people the impression that inflation is a natural market phenomenon when it is not. It also conceals who is causing this unnatural occurrence to happen.

“…. It would be like redefining robbery to mean “a mysterious property loss,” as if there was no robber.

“The reality is that inflation is 100% a political phenomenon.

“…. Doug Casey puts it best: “…inflation is expropriation by fraud.”

“Here’s the ugly truth. Central banks only exist to steal money from you through inflation and redirect it to the politically connected.

“…. Any sober assessment of the situation reveals that it’s a swindle of historic proportions.”

How big was the swindle?

Richard breaks it down:

“If you are a…typical family of four, your household should have raked in nearly $50,000 newly created dollars free. Did you? Then someone else must have received your share.”

The politically connected, of course. Trillions went to the top 1% while the working class got little to nothing. Estimates show each person in the top received 230 times more money than the working class. Swindle indeed!

Richard explains the creation of funny money is happening everywhere:

“After the abandonment of gold as money in the 1970’s, all (governments) have issued political currencies that can be created without limit.

“The new money goes somewhere, and wherever it goes, malinvestment accumulates.”

The Fed destroyed free market interest rates, creating hot spots everywhere. Corporations borrowed on a massive scale, not to improve production, or increase sales – but to use the easy money to pay dividends, buy back stock and pay themselves nice bonuses. The FED-banks made free money available and it had no place to go and a ton poured into the market. The correction has now begun.

Tech companies, many still unprofitable, find their companies valued at billions. Much like the roaring 20’s, “Happy Days are here again”, until they are not.

The Fed, creating trillions out of thin air, has created an inflation disaster. The Fed ignored it, trying to hoodwink the public. People are no longer fooled; but angry and afraid.

“Politicians and bureaucrats eventually become concerned about prices rising due to the fall in value of the money, so they “tighten” the money supply.

“The flow of money to the hot spots slows, and the correction of malinvestment begins. Businesses go broke and workers lose their jobs.

“That’s a depression – the correction period, the “shakeout” following inflation. It lasts until the assets of the businesses are sold off and the workers find new jobs.

“Usually, when a depression begins, officials panic and reinflate.

“That stops the correction. This incomplete correction is a recession.

“A recession is a depression that has been cut short by resumption of inflation.

“This disorganization of firms and employees can be called the “injection effect.” Firms are created and expanded, and employees are hired, in areas where they otherwise would not be. These mistakes are malinvestment.

“…. As malinvestment grows, so does the amount of dollars needed to prop it up.

“The Fed’s maneuvering room eventually disappears. Any injection big enough to avert a depression is also big enough to trigger a runaway inflation.

“…. I think that is where America is now. I think there is an 80% probability the malinvestment from the last few years of spectacular inflation of the money supply has brought us to the convergence point in Figure F. 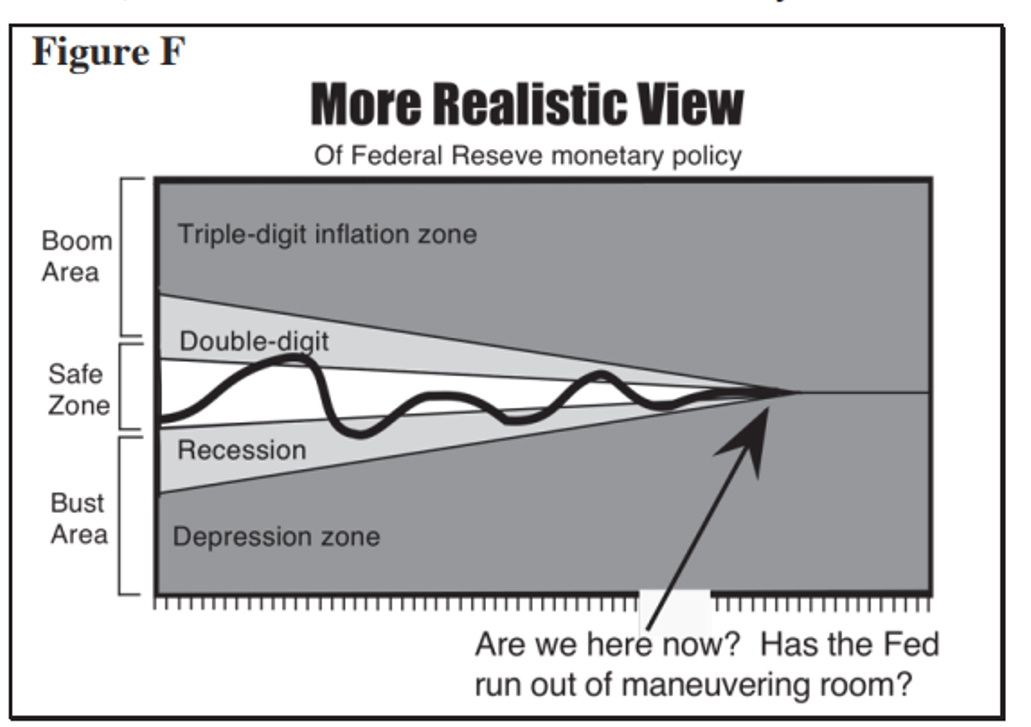 “…. Odds are that if they print enough money to stave off a depression, they will send the dollar into hyperinflation.

“…. Think about it. Just the tiniest bit of tightening, not even taking us within shouting distance of the 4% historic real interest rate, is threatening to spark the correction, meaning a recession or depression.

“Fed officials must be scared witless.”

The political class should be terrified! Both political parties are responsible for the mess; particularly since the 2008 bailout. Don’t get fooled into thinking this is a partisan issue, it is NOT!

Will we get a peaceful revolution at the ballot box? This whole mess is a primer for congressional term limits.

Richard concludes with some excellent investment advice and these comments:

“Political power junkies have created so much confusion, turmoil, degeneracy, and lunacy that we and our loved ones are on our own.

“…. Allow yourself to be optimistic. Compared to any other time or place in history, America’s general rate of change is supersonic. The great French hyperinflation of the 1790’s lasted six years. It’s plausible that todays will last only six months. …. It all depends on how many people spread the word about…. Malinvestment and the need to let the shakeout progress unhindered as in 1945-46.

“…. Warning: in deflationary panics, investors sell everything including what they should be buying. Don’t join this temporary panic. Good stocks will come back, so always keep some cash handy to take advantage of fire sale prices when panic arrives.”

If the government reinstates Glass-Steagall and curtails their ridiculous deficit spending, the malinvestment should come out of the economy quickly. If the Fed and political class flinch and reinflate, we could easily see triple digit inflation ending with another long Great Depression. Either choice leads to tough times, let’s get it over with quickly.

I’m comforted in knowing that many citizens completely understand who the real enemy is.

Your subscription starts with the July EWR which contains a complete explanation of the disaster I’ve written about here.

Readers should know Richard approved this article. I want to publicly thank him for allowing us to use a lot of his material for our benefit. 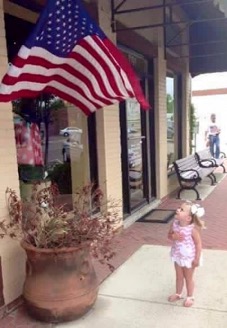 I hope everyone had a great 4th of July weekend. I grew up in the aftermath of WWII. The 4th of July and Memorial Day events were very patriotic. We had a big parade in town. My stepfather wore his American Legion uniform and proudly marched with his fellow veterans.

When I was old enough, I wore my Boy Scout uniform and we too marched in the parade.

Now the holidays seem to have lost some of their meaning. I fear the youth of America will never quite understand the sacrifices their forefathers made for their freedom and the best standard of living on the planet.

I was sad when I saw, “86% said the country is greatly divided over the most important values.” Sadly, the political class is hell-bent on pitting one group against another.

“However (political parties) may now and then answer popular ends, they are likely in the course of time and things, to become potent engines, by which cunning, ambitious, and unprincipled men will be enabled to subvert the power of the people and to usurp for themselves the reins of government, destroying afterwards the very engines which have lifted them to unjust dominion.”

My favorite, and very true: