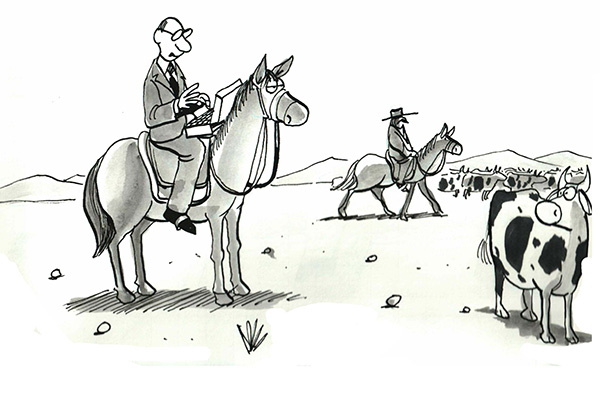 As a youngster, every Saturday we would head to the movies for a double feature of cowboy movies; all for the price of a quarter.

Sandwiched between the storyline we saw scenes of cowboys rounding up cattle, herding them toward parts unknown. That was before McDonald’s, and we never saw them marching to the slaughterhouse.

We are being herded

This week’s reading convinced me that our government is herding the cattle (us) to a place we don’t want to go. They don’t want us to know the destination until the gate is closed. Misinformation is masking the trail.

CNBC provides, “A recap of Fed Chair Powell’s inflation and interest rates comments to the Senate”:

‘It’s a lot of demand for short-term,” said Powell. ‘There’s a lot of liquidity, and people want to store it’ in Treasury bills.

…. ‘In a way, it’s a statement of confidence on the part of the market that we will have a robust and ultimately complete recovery,’ he said.

…. The 10-year yield has barely changed during his comments.”

Demand? Really? If there is such demand for low interest US debt, why has the Fed’s balance sheet doubled and interest rates tripled in the last year?

“Anyone with some gray matter can figure out that if there is a lack of demand for Treasuries, that the only way to make them attractive again, is to jack up the yield… The 10-year Treasury’s yield has nearly tripled in the last 6 months, due to a lack of demand at the low yields…

Just last week the markets told the Fed that they couldn’t take on any more Treasuries. That was bad timing, because shortly after that announcement, the House approved the $1.9 Trillion Stimulus… This is NOT money that the U.S. has in reserve, it’s money that they will have to print, and issue more Treasuries to finance that debt… Uh-Oh…”

“Wall Street Sends a Message to the Fed: We Have Run Out of Places to Stuff Your Treasuries 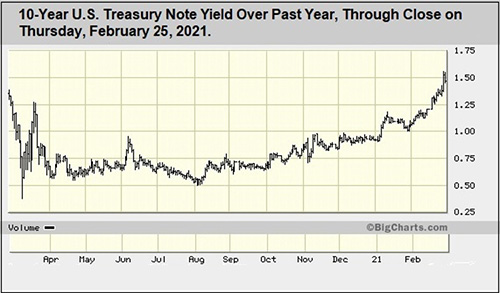 …. The Treasury market is now projectile vomiting T-notes should come as a surprise to no one. As the chart above indicates, yields on the 10-year note have been rising sharply since early August….

The sharp and persistent rise in yields have left those who bought the T-notes at dramatically lower yields licking their wounds from heavy losses.

…. That has also dramatically lessened the appetite to buy more Treasuries at the current yields when the supply is expected to continue to increase as a result of rising government deficits and stimulus spending.

Another catalyst for yesterday’s selloff in Treasuries was a very sloppy Treasury auction where the government attempted to stuff $62 billion of a 7-year Treasury note into an already over-supplied market.”

There is little demand and the market is insisting on higher yield. Wonder what the rates would be if we had a free market? The government won’t let that happen.

The US is the biggest debtor in the world. Politicos say they want to keep interest rates down to spur the economy. Yeah right!

If interest rates were 6%, instead of today’s 1%, investors would receive around $1.7 trillion in additional interest annually. Every IRA, 401k and pension plan would be healthier, and retirees would be sleeping better. Adding another $1.7 trillion to the annual deficit would make it tougher for politicos to buy votes (and sweet deals for their family) with tax dollars.

When you consider inflation, interest rates are already negative. CDs and treasury bonds are guaranteed to destroy your wealth.

In 2016, then Fed Chair Janet Yellen told the House of Representatives:

“Negative interest rates are a tool employed by countries in Europe and elsewhere….

By some accounts, these policies appear to have provided additional policy accommodation. As I have noted previously, we certainly are trying to learn as much as we can from the experience of other countries. That said, while I would not completely rule out the use of negative interest rates in some future very adverse scenario, policymakers would need to consider a wide range of issues before employing this tool in the United States, including the potential for unintended consequences.”

What are they? Bad consequences for the people or the banks and government?

“Negative interest rates operate in an upside-down world of banking. Instead of a bank paying you to park your cash in a savings account or certificate of deposit (CDs), you’ll (theoretically) have to pay them to hold onto your cash. Think of it like a storage fee….”

Might this be the unintended consequences Yellen & Co. want to avoid?

“A digital currency developed by the fed is a ‘high priority project for us,’ Powell told Congress….

As the world’s reserve currency, Powell stressed that the US doesn’t have to be first in issuing a digital dollar, but it needs ‘to get it right.’

‘This is something we’re investing time and labor in, across the Federal Reserve system,’ Powell said.”

“I truly believe that a digital currency will replace folding currency in the near future. I wrote about this recently in my in my Daily Pfennig newsletter:

…. I first told you months ago about how the U.S. would introduce a digital currency, and you would wake up one Monday morning, turn on your computer, log in to your bank account, and find that it no longer reflected dollars held, replaced by digits. This isn’t going to happen overnight, …or maybe even next year. It…depends on when the U.S. has to default on any of their debt, and the dollar begins to fall like a rock.

I feel this whole stay at home thing and buy everything with your credit card, is part of the plan. If the Government gets everyone to stop spending folding currency, they are half way there to their implementation of a digital currency.

James Rickards believes this is a worldwide effort and clearly explains it:

“It’s an important move in the direction of eliminating cash and forcing users into a 100% digital system using credit cards, debit cards, and smartphone apps….

Use It or Lose It

I’ve said all along that you cannot put negative interest rates on consumers until you eliminate cash. Otherwise, savers would just withdraw cash from the banks and stuff it in mattresses to avoid the negative rates. Implicitly, the European Central Bank (ECB) seems to agree.

One of the ECB Board members says that negative rates (really confiscation) will be applied as a “penalty” against ‘hoarding’ cash. In plain English, that means they will create digital money, force you to spend it, and if you don’t spend it, they will take it away as a ‘negative rate.’

Now all of the pieces of the global elite plan are converging.

This is not speculation anymore; it’s happening in front of our eyes. The Great Reset is coming fast. The future is here.”

We are in a battle of will between the citizens and the political class.

Some are pushing back, demanding congress reign in the banks, reinstate Glass-Steagall and stop the corruption and reckless spending.

Simone De Alba interviews a Texas lawmaker who has proposed legislation that would allow Texans to vote on becoming an independent nation:

“The voters shall be permitted to vote in a referendum on the question of whether this state should leave the United States of America and establish an independent republic.”

If the bill advances, Texans will vote during the Nov. 2, 2021 election.

While I hope things are resolved peacefully, investors must protect themselves. Diversify what you can into hard assets, globally if you can. It might be a good idea to own some property in Texas.

I believe in the American spirit and ingenuity; we won’t be herded like cattle to slaughter; many will push back. Can you blame the Texans if they decide to leave the U.S.? If Texas goes, many other states will hem and haw and some will follow. People will move to locations that suit their beliefs.

Last week we drove 1800 miles across the US. We were one day ahead of the rain, and the trip was beautiful… 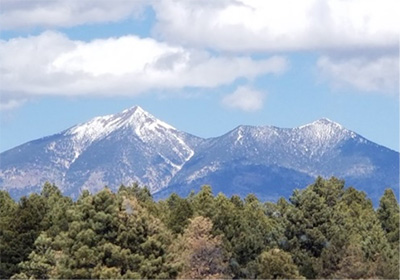 We left 80-degree weather and the temperature dropped 30 degrees by the time we got to Flagstaff. Jo took a photo of snowcapped Humphreys Peak (12,633 feet).

We then headed east on I-40, across New Mexico, Texas, Oklahoma and Arkansas. We ran along old route 66 to Oklahoma City.

Just before the Tennessee border, we headed northeast through the corner of Missouri, Tennessee, Kentucky and Indiana. While the drive was a bit longer, we avoided going through St. Louis and Illinois. It didn’t seem to add any time to the trip and was much less stressful. As always, much of the road was under construction.

We are spending a week with family, then pet-sitting while they go on spring break.

“Until we can reestablish a condition under which the earnings of the people can be kept by the people, we are bound to suffer a very severe and distinct curtailment of our liberty.” — Calvin Coolidge

We passed Will Rogers Airport in Oklahoma. Some of his humor seems appropriate for this week’s article: