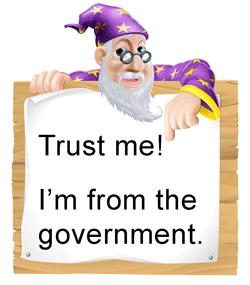 Since the August stock market reversal all eyes have been on the Federal Reserve. What will the Federal Reserve (who are more aptly named the Grand Wizards of Economic Theory, or GWOET for short) do to fix the world? Like Merlin the Magician, what magic trick will they come up with to cure the economy, stock market, labor market and underfunded retirement plans of the nation?

They announced they are leaving rates unchanged. Whooppee! Their four-syllable GWOET-speak is an attempt to fool the world into believing they have things under control. Don’t spend a lot of time reading their published statement. For the last few years they provided “forward guidance”, hinting a rate increase was coming, only to follow with an excuse that “now is not the right time”.

The Great Houdini himself would marvel at how the GWOET can create the illusion that they know what the hell they are doing. Let me simplify the announcement. They don’t know what to do so they decided to kick the can down the road for another day.

In July, the Research Division of the St. Louis Federal Reserve published a research paper outlining the steps the GWOET have taken, and concludes:

“Much of the work on the quantitative effects of QE (Quantitative Easing) consists of event studies, whereby researchers look for effects on asset prices close to the date of an announced QE intervention…. All of this research is problematic, as it is theoretical. (emphasis mine)

Further there is no work, to my knowledge, that establishes a link from QE to the ultimate goals of the Fed – inflation and real economic activity. Indeed, casual evidence suggests that QE has been ineffective in increasing inflation.”

David Stockman gets right to the point:

“The fact is, any one who doesn’t imbibe in the Keynesian Kool-Aid dispensed by the central banking cartel can see in an instant that 80 months of ZIRP (zero interest rate policy) has done exactly nothing for the main street economy. Notwithstanding the Fed’s gussied-up theories…the litmus test is real simple.

…(A)rtificial suppression of free market interest rates by the central bank is designed to cause households to borrow more money than they otherwise would in order to spend more than they earn, pure and simple….

But the whole enterprise is a crock. The consumer spending pump can’t be primed anymore because households reached a condition of “peak debt” at the time of the financial crisis.”

Unlike Keynesian economic theory, Kitchen Table Economics is fact based. When real people are investing their hard earned money to feed their family, they learn the difference between the facts of life and ivy-league theory.

Instead of the GWOET meeting behind closed doors they should get into the real world. Go visit the restaurants in farm towns at 6:00 AM. Visit the local business clubs where the small businessmen, the heart of America, meet regularly. Don’t talk, LISTEN! Employers and retirees would give them an earful of real world challenges, many of which have been caused by the government. The GWOET would be totally disoriented, they have a different view of the world.

Following are some basic Kitchen Table Economic principles the GWOET does not understand:

1. Propelling the stock market to record highs, and restoring bank profits does not make for an economic recovery. The recent 5.1% unemployment number coming from the Bureau of Labor Statistics is a joke. Anyone who is unemployed, but their unemployment benefits have run out, is no longer considered unemployed. Many prefer to look at the more comprehensive U-6 unemployment numbers. Unemploymentdata.com reports:

The current differential between Gallup and BLS on supposedly the same data is 3.9%!”

No point in quibbling between the BLS and Gallup. Kitchen Table economists know that unemployment in the double digits means the economy is doing poorly.

The eyeball test is all Kitchen Table economists really need. They know what a booming & bust economy looks like. The skyline is not dotted with construction cranes, restaurants are closing, shopping malls have a lot of vacant space and good jobs are hard to find. Mainstream America knows what they are seeing and they are not fooled.

The GWOET chose to favor the banks and Wall Street over the average citizen. Ben Bernanke referred to the impact on seniors and savers as “collateral damage”. Destroying the retirement dreams of several generations while the GWOET experiments with the economy of a nation is an outrage!

2. If you have a problem of too much spending and debt you do not solve it by borrowing and spending more. I am a member of Lending Club and see hundreds of loan applications from average working people seeking a “Debt Consolidation Loan”, to pay off those debts with a lower monthly payment. That may solve part of the problem, but if they keep on spending as they have in the past, soon their credit cards will be maxed out again.

The GWOET are enablers for the spendaholics in congress. Every 1% reduction in interest rates saved the government $180 billion in interest. The political class is unwilling to cut up their credit cards and the debt just keeps getting higher.

3. In a free market – the law of supply and demand, always rings true. If supply is low, the price of both goods and wages go up. If the labor market is tight, minimum wage laws be damned; the local fast food joint is going to pay whatever it takes to get help and pass along those costs to the consumer by raising prices.

Demand means a whole lot of people want to buy your product or services. When demand is high you raise prices and eventually justify building new factories and hiring more people.

Everyone is a winner! Supply is increased so consumers are protected from ultra-high prices. New jobs are created helping the economy and business owners are rewarded because they make more profit. Even the government wins because it rakes in more tax dollars.

A free market operates without government interference. The GWOET believes their job is to intrude into free markets, which they do with a vengeance.

Since 2008, the Federal Reserve’s balance sheet has increased from around $850 billion to over $4.4 trillion. Talk about interfering with free market supply and demand, the money supply is now approximately 5 times higher than it was when they started their economic experiment. Anyone who counted on income from Certificates of Deposit or high quality bonds as retirement income knows full well the effect of those decisions on their family.

The GWOET don’t get it

The largest demographic group in the U.S. is baby boomers. They are retiring at the rate of 10,000 per day and will continue for the next 15 years or more. In the next 12 years the number of people on social security is estimated to go from 59 to 79 million.

When are the GWOET going to realize the demographic group with the most disposable income – the one group that could jump-start the economy, have lost confidence in the government elitists who think they are smarter than everyone else?

I disagree with Stockman about “Peak Debt”. Baby boomers have the ability to borrow and spend. They are at the point in life where they want to get out of debt and stay that way! They are downsizing and cutting back on spending because they are looking toward retirement and are scared. All their retirement projections went out the window when interest rates went to zero. Mainstream workingmen and women understand Kitchen Table Economics.

When a government intervenes in the free market, history shows they create a bubble. Eventually it will burst and a lot of people get hurt. The recent GWOET announcement makes little difference. It was nothing more than hot air blowing the bubble even larger. Our economy is past the point of no return; the bubble will burst and their economic experiment will fail. No one knows for sure when; but it’s just a matter of time.

Mainstream workingmen and women understand Kitchen Table Economics. No matter how many obstacles the government puts in front of them, they will do whatever it takes to survive and provide for their family. That is a fact!

Regular readers know we normally publish our articles on Thursday. There was a lot of hoopla leading up to yesterday’s announcement by the Federal Reserve. My editorial team convinced me to release this article today rather than wait.

We will dispense with the humor and catch up in our next edition on Thursday, October 1st.