The Jig Is Up! 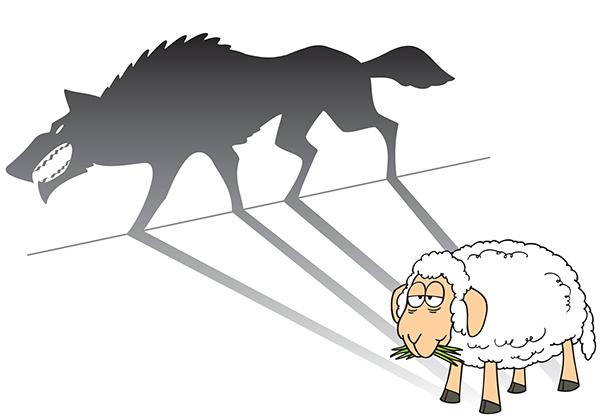 “Today Congress is constantly besieged by minority groups seeking benefits from the public treasury. Often these groups control enough votes in many Congressional districts to change the outcome of elections.

And so, Congressmen find it difficult to persuade themselves not to give in to pressure groups.

With no bad immediate consequence, it becomes expedient to accede to a spending demand. The Treasury is seemingly inexhaustible. Besides the unorganized taxpayers back home may not notice this particular expenditure — and so it goes.”

“…. When you find that Lenin declared and demonstrated that a sure way to overturn the existing social order and bring about communism was by printing press paper money, then again you are impressed with the possibility of a relationship between a gold-backed money and human freedom.

In that case then certainly you and I as Americans should know the connection. …. In a free country the monetary unit rests upon a fixed foundation of gold or gold and silver independent of the ruling politicians.”

Almost 30 years later (1975) citizens were finally allowed to own gold.

On March 4 this year the House and Senate agreed on a budget of $37-1⁄2 billion. Appropriations already passed or on the docket will most certainly take expenditures past the $40 billion mark. The statute providing for a maximum budget has fallen by the wayside even in the first two years it has been operating and in a period of prosperity.”

For decades the ruling class has ignored any attempt (and laws) to reign in their reckless spending. The US Debt clock shows our national debt is rapidly approaching $29 trillion, and unfunded government promises approaching $155 trillion.

Buffett complained about a $2 1/2 billion annual deficit; government now does it daily. The debt to GDP ratio has doubled in 20 years.

The government used to borrow from investors to make up the shortfall. Now the Fed simply creates money from the magic money tree, avoiding paying all that pesky interest – historically a major source of retiree’s income.

“I can find no evidence to support a hope that our fiat paper money venture will fare better ultimately than such experiments in other lands. Because of our economic strength the paper money disease here may take many years to run its course.

…. Those elements here and abroad who are getting rich from the continued American inflation will oppose a return to sound money.

…. Unless you are willing to surrender your children and your country to galloping inflation, war and slavery, then this cause demands your support.

In 1971, Nixon “temporarily” removed our money from the gold standard, fueling the “paper money disease.” Within a decade, inflation was raging. Were it not for a courageous Fed Chairman, Paul Volcker, our currency, and way of life could have easily collapsed.

Our article, “Inflate or Die!” outlines how things have changed since the Volcker years. Wall Street banks are casino banks, printing trillions for the benefit of politicians and bank profits. Taming inflation is much more difficult today than when Volcker took the challenge.

“…. (T)he Fed might be able to afford to pursue the most aggressive monetary policy experiment in US history so long as inflation expectations remain in check.

Because once inflation expectations become unanchored, consumer and business behavior shift in a way to ensure that inflation is more than “transitory.” People begin stockpiling things they fear they won’t be able to get in the future due to rising prices or shortages. This pushes up prices further, exacerbating these very fears, inspiring even more stockpiling and so on.”

Federal Reserve Chairman Jerome Powell calls current inflation “transitory” and admitted, “Inflation could Turn Out To Be Higher And More Persistent Than We Expect.” Expectations???

“We will not raise interest rates pre-emptively because we fear the possible onset of inflation. We will wait for evidence of actual inflation or other imbalances.”

“After its two-day meeting ended on July 28….

The Fed did not lift interest rates from their near-zero level, nor did it announce when it planned to let up on its $120 billion in monthly bond purchases. Nevertheless, with inflation soaring quickly and some employment measurements finally starting to show sustained improvement, it did hint at considering such a move in the future.”

Shadowstats.com calculates inflation using the same method used during the Volcker years; it is approaching 15%. Powell ignores the evidence and tells us to do the same, things will magically get better. 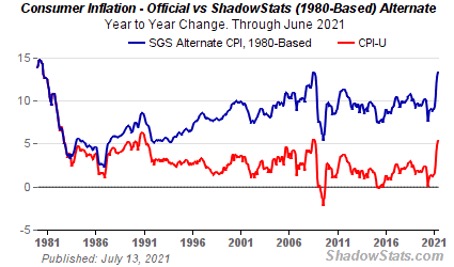 Powell doesn’t want to negatively impact the market or reduce casino bank (the Fed’s owners) profits. He’s trying to kick the can down the road through the midterm elections. While his term expires in 2022, don’t expect another Paul Volcker to emerge. Fed nominees believing in fiscal sanity are labeled as “radical” and routinely voted down by a bipartisan majority.

Money printing first turns into inflation, and then hyperinflation, when consumers and businesses lose confidence in price stability and see more inflation on the horizon. At that point, money is dumped in exchange for current consumption or hard assets, thus increasing velocity.

Peter Reagan’s article “Highest Inflation in 30 Years vs. Denial, Hand Waving and Excuses” points out high inflation is here and hard to ignore.

EXPECTATIONS can fuel rampant inflation. Powell’s not going to act until he clearly sees the evidence. Gimme a break! He ignores the evidence, tells us it is “transitory” while admitting things may be worse, and continue longer than they EXPECT.

The Jig is up?

“I could be wrong, but it looks to me like America has arrived at a historic turning point. Three crises – the rebellion against the swamp, the cyberwar, and the new era of inflation – are coming together….

I believe there is a 90% probability this economic and political Mt. St. Helens will be in full roar within 18 months.

This is not speculation or fear-mongering. When you stand back and view the Big Picture, which the mainstream press rarely does, you can clearly see the three crises are already well along.”

This is NOT a partisan political issue.

Rahm Emmanuel said, “Never let a good crisis go to waste.” A crisis, real or manufactured, gives government an opportunity to do things people would not normally put up with. It’s unrealistic to expect the political class to put the needs of the citizens ahead of their own self-interest.

I met three speakers at a Casey conference who lived in countries that experienced hyperinflation. Their homelands fell into martial law, citizens were not safe, and their currency was worthless.

While they spoke about investing, their primary message was clear; Protecting our families and our wealth is OUR responsibility. Don’t count on the government.

I feel we can survive Carter-years type inflation. Hyperinflation scares me!

Richard Maybury, a student of history, tells us:

“Twice before in American history, in the 1780’s and 1860’s, American dollars were inflated into worthlessness, and it looks like we are nearing a third. Fortunes were earned in those cases, and will be in this new one.

…. Do not be without 10%-20% of your financial net worth in gold and silver bullion coins. …. In severe inflations, precious metals usually go wild when the general public discovers the need for them. These metals will probably increase in real value so much they will fully cover your losses in other financial assets.

…. Invest in endurables. An endurable is real stuff and cannot be created out of nothing…. Examples of endurables are real estate, fine art, fine antiques, precious metals, classic cars, rare coins and raw materials. They are all real stuff and widely traded.”

It wasn’t raining when Noah built the Ark.

Thanks to all the readers who took the time to send kind, encouraging notes about my son-in-law’s surgery. All is on track and Jo is back home in AZ.

Friend Chuck Butler and I have had many discussions about how lucky we are to live in today’s time. 25 years ago, someone with similar medical issues might not have made it; being thankful for the advancement of medical technology. He was recently in the hospital and I’m happy to report he’s back smiling and laughing again.

I filled in for Chuck as a guest of “On The Move”, hosted by Rich Checkan and Chris Blasi. It was a no-holds-barred discussion about the economy, the Fed’s direction, motivation, and how we can protect ourselves in today’s challenging economic times.

Check out the question Paulette asked at the end. It really hit home with me, and likely many of our subscribers. She was kind enough to send me a nice note thanking me for addressing her concern.

They posted the webinar on YouTube. You can watch it HERE.

I put the following quote on the Miller On The Money Facebook page. I decided to test what would happen if I spent $25 for some more exposure. In less than two minutes Facebook rejected it, saying it did not meet their “guidelines”. They allow it on the page but will not promote it. I guess it must be offensive….

“Vote for me. I’ll use my office to take another American’s money and give it to you.”

Friend Alex N. sent along some cool stuff, titled “Do you know?”

And my favorite… With Jo in Indiana for a couple weeks, I can confirm the validity of this one: