The More I Learn The Madder I Get! 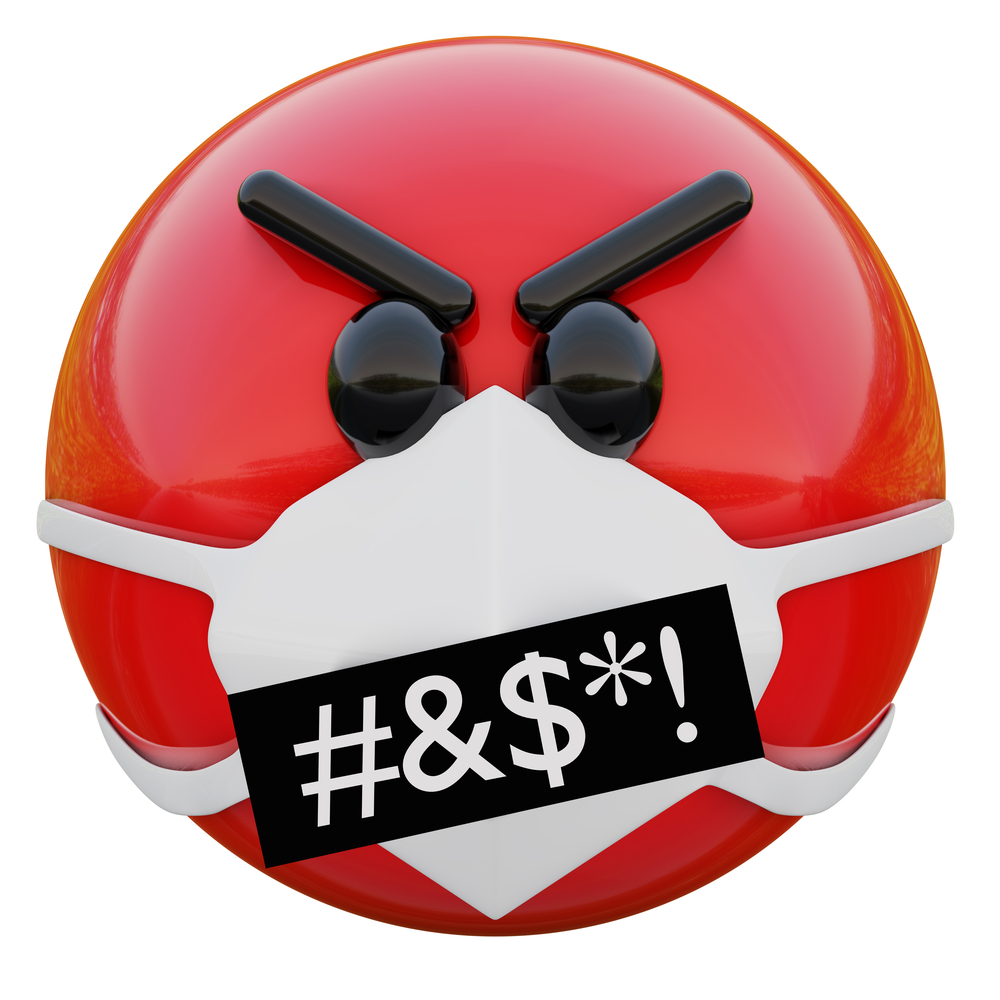 I’m red in the face, eye-popping, blood pressure peaking mad! Our country is in a heck of a mess, for the wrong damn reasons!

Sadly, some reporters smirked while reporting the Dow capped off the worst first quarter on record, the updated Coronavirus death toll, projections for thousands more and record unemployment claims. The politicization of a health crisis is enough to make my blood boil. What’s wrong with this country?

I put everything aside for a few weeks because of a family visit. I ignored my daily reading stack; it grew tall. When I finally dug in, the more I read, the madder I got. Finally, with dozens of scrawled notes, I decided to link snippets and add my thoughts.

The Fed has no shame

March 23. Wolf Street, “What Are All the Fed’s Corporate & Investor Bailout Programs and SPVs? Here’s the Whole Shitload of Them”. They give us a four-page load, concluding:

“Indirectly via its Special Purpose Vehicles and its Primary Dealers, the Fed can buy even old bicycles, as long as taxpayers take the losses.” (Emphasis mine)

The banks keep the profits and stick taxpayers with their losses. This crap has to stop!

“This legislation is urgently needed to bolster the economy, provide cash injections, liquidity and stabilize financial markets; to get us through a difficult…and challenging period in the economy facing us right now.

…. This package will be the single largest Main Street assistance program in the history of the United States…. (BS alert!)

“…. The first thing to understand is that we are the only “democracy” in the world that has turned the actual creation of unlimited amounts of our money over to a private entity owned by mega Wall Street banks….

…. Until Americans find their backbone, this is the “democracy” we are preparing to hand over to our children and grandchildren – a nation crippled by debt and living under the jackboot of corrupt politicians in service to their overlords on Wall Street.” (Emphasis mine)

March 31. WSOP reports, “The Dark Secrets in the Fed’s Last Wall Street Bailout Are Getting a Devious Makeover in Today’s Bailout”.

“First,…the bailout (goes) to the Federal Reserve Bank of New York, which is a private institution owned by the Wall Street banks.

…. The second dark secret is that the underlying cause of the enormity of the bailout…has never been reformed by Congress. A feeble attempt was made in the Dodd-Frank legislation but that was quickly repealed by an amendment forced into a must-pass spending bill….

These same banks…are currently receiving the next round of bailouts…using many of the identical programs that the New York Fed used the last time around….

But … but … what about transparency?

“Fed Chairman Jerome Powell has repeatedly testified to Congress that the Wall Street banks it regulates have plenty of liquidity and capital.

…. Imagine the public and political backlash if it now turns out that the Fed has allowed these banks to become the same money-losing derivative casinos that they were in 2008 and they need trillions of dollars more in another bailout.”

“The Fed fought for years in court to keep the details of…Wall Street bailout programs a secret from the American people. (Emphasis mine)

Thanks to an amendment attached to the Dodd-Frank financial reform legislation of 2010…the Government Accountability Office (GAO) was instructed to conduct an audit of…programs the Fed set up to secretly funnel $29 trillion to the denizens of Wall Street….”

The U.S. Senate voted 96-0…on a massive bailout of Wall Street banks versus a short-term survival plan for American workers thrown out of their jobs – and potentially their homes.

The text of the final bill was breathtaking in the breadth of new powers it bestowed on the Federal Reserve, including the Fed’s ability to conduct secret meetings with no minutes provided to the American people. (Emphasis mine)

…. Adding to the suspicions that the Fed doesn’t want to have to battle Freedom of Information Act (FOIA) requests (sunshine law requests) again in court…the Senate-approved stimulus bill repeals the sunshine law for the Fed’s meetings until the President says the coronavirus threat is over or the end of this year.

That could make any FOIA lawsuits to unleash details of what’s going on next to impossible since it has been codified in a federal law.” (Emphasis mine)

With a 96-0 senate vote, and voice vote in the house, congress authorized mere billions for the citizens and trillions to bail out the banks – with NO accountability.

Americans must realize this is not a democrat/republican issue. While the politicians will fight, and the media will pile on, our government is not looking out for us – the deep state has higher priorities.

In 2008, using a “banking crisis” excuse, the government bailed out the banks. The plan was sold as “temporary” which turned out to be a lie. Twelve years later, using a “health crisis” the casino banks are being bailed out with trillions more at the expense of taxpayers, seniors and savers.

Stocks will rise (“a dead cat bounce”, the old timers call it) on all the “bailout” news, and then give up another 50% of their value.

Then, the feds will face a terrible choice. Printing more money may bring hyperinflation, like Weimar Germany, Zimbabwe, or Venezuela.

But not printing will risk a deep depression…a “throw out all the bums” shock in the next election…or even a revolution. (Emphasis mine)

Economists at the Fed’s St. Louis district project total employment reductions of 47 million, which would translate to a 32.1% unemployment rate….

“What good is a check for an individual if there’s nothing open to use the check for spending?” OK, some bills might get paid, but in essence this is throwing bad money at a bad thing, in my opinion…. We’re going to go $6 Trillion more in debt, but who’s counting these days anyway? Got gold?”

March 30, Peter Schiff podcast, “Americans Are in For a Rude Awakening”:

“Peter…thinks the world is going to kick out the dollar as the reserve currency.

…. This may well crush the retirement dreams of many Americans. With the erosion of the dollar’s purchasing power, retiring simply won’t be an option for many people.

Why am I beet red, eye-popping angry?

Our country may be on the verge of a depression, and possibly very high inflation. In the last decade our federal debt has tripled with money spent bailing out corrupt banks.

The 2019 federal budget estimated spending at $4.5 trillion. If bailing out the banks for the second time in a decade by doubling federal spending with no accountability, and leading us into a depression doesn’t get you angry, you just don’t get it!

Will it take a revolution to repeal the Glass-Steagall Act and institute congressional term limits? Career politicos must go!

Ron Paul asks, “Will Coronavirus End the Fed?” Americans should be outraged at being ripped off by the Fed for over a century. It’s time to abolish the Fed!

I hope we don’t have a revolution, but if we do, bring it on while I’m still able to participate! We owe it to future generations. Damn right I’m mad!

Sorry for running long with my anger. I’m sure a lot of people are fed up with all the crap that is going on.

When times get stressful, I enjoy time on my chaise lounge in the back yard. Our weather cooperated and Jo and I have been sitting outside into the early evening. A soft spring breeze whispering across your face is good for the soul. 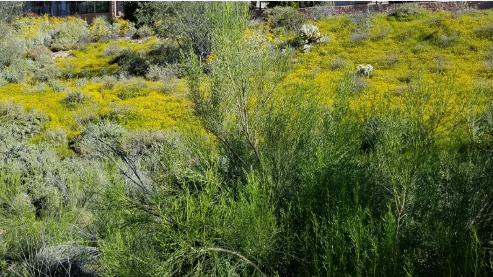 Behind our back fence is what the locals call a “nature area”. Where I grew up, we called it a ditch. It is populated by all kinds of critters; snakes, bobcats, coyotes, javelinas, you name it.

Our favorites are the beautiful birds that enjoy our bird bath and feeder.

Mother nature saw fit to rain at the right time and our Daisy Mountain backyard ditch is alive with color like we have never seen before.

Springtime is here in our part of the world. Like every spring, it brings optimism and hope for the future. People are soon going to tire of being under house arrest and our world will slowly come back to normal.

I am a true believer in the American spirit. No matter how much stuff hits the fan, people find humor in it, and try to keep everyone’s spirits up. Friend Scott L. cracked me up with this email: