The New York Fed Would Make The Godfather Proud! 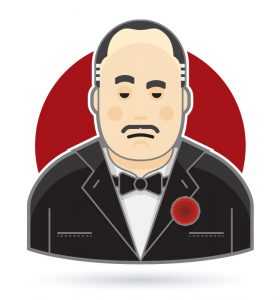 Wikipedia tells us, “In the first Godfather movie, the ‘meeting of the Dons’ scene uses the Federal Reserve building exterior.” How appropriate!

This Burning Platform “Quotes of the Day” grabbed me:

“When we talk about company culture in the context of financial services, the first thing that comes to mind is the risky, unethical, and sometimes criminal behavior in the banking industry, particularly during the financial crisis. And ten years on from the crisis, this behavior persists. Instances of fraud, money laundering, and scandals related to foreign exchange and LIBOR continue to make the headlines.

This behavior puts a spotlight on the essential role of robust regulation and strict enforcement [which is the primary responsibility of the NY Fed]. (Emphasis mine) But illicit and unethical behavior is rarely the result of an isolated ‘bad apple.’ [or a rogue trader] It’s more often the symptom of a rotten culture….

Culture is created-intentionally or otherwise-by the structures, incentives, and behavioral norms that shape our working lives.”

I called friend Chuck Butler. We agreed, criminal activity is the norm for the big banks; however, the New York Fed, certainly is not applying “Robust regulation and strict enforcement”.

“Gentlemen! I too have been a close observer of the doings of the Bank of the United States. I have had men watching you for a long time, and am convinced that you have used the funds of the bank to speculate in the breadstuffs of the country. When you won, you divided the profits amongst you, and when you lost, you charged it to the bank.

….You are a den of vipers and thieves.“

Woodrow Wilson established the Federal Reserve, making it easier for the bankers to do their bidding.

Who owns the New York Fed?

…. JPMorgan Chase, Citigroup, Goldman Sachs, and Morgan Stanley are also four of the five largest holders of high-risk derivatives. (Bank of America is the fifth.)

…. These same Wall Street banks also participate in various advisory groups…where they hash out “best practices” for their industry. Those “best practices” were not sufficient to prevent JPMorgan Chase from becoming a three-count felon, Citigroup a one-count felon, and four of the banks from actively engaging in creating and selling subprime investments that blew up the U.S. financial system, the nation’s economy and a good swath of Wall Street in 2008.”

NO ONE went to jail. In 2018 MarketWatch provided a tally of the fines, an astounding $243 billion. Note the familiar names: 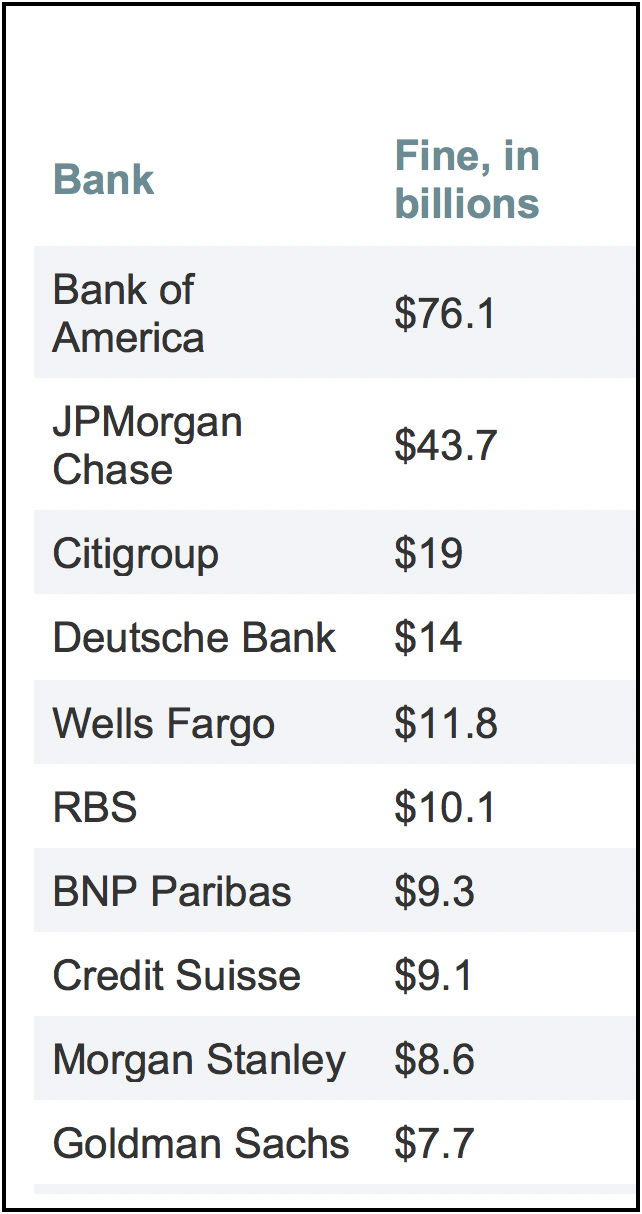 WSOP calls out the NY Fed:

After Wall Street blew itself up under the indulging and incompetent supervision of the New York Fed in 2008 it was exposed that the Fed had secretly created $29 trillion in electronic money to bail out zombie banks….”

…. Three traders at JPMorgan Chase, the bank headed by Jamie Dimon, got smacked with the same kind of criminal felony charge that was used to indict members of the Gambino crime family in 2017. The charge is racketeering and falls under the Racketeer Influenced and Corrupt Organizations Act or RICO.

…. RICO is typically used to indict mobsters (Emphasis mine)…. Two trial lawyers compared JPMorgan Chase to the Gambino crime family five long years ago and recommended in their 2016 book that the bank’s officers be prosecuted under the RICO statute.

There is quite a history of criminal activity:

“Indeed, the serial crime wave only began when Dimon took over. Dimon became Chairman of the Board on December 31, 2006. He has been CEO since December 31, 2005 – presiding over almost 14 years of an unprecedented three felony counts, market rigging charges, $36 billion in fines and the staggering loss of $6.2 billion of bank depositors’ money in the London Whale gambling in derivatives episode.”

“Sitting quietly on the Federal Reserve Bank of New York’s web site is a vendor agreement and other documents indicating that JPMorgan Chase holds all of the Mortgage Backed Securities (MBS) that the New York Fed has purchased under its various Quantitative Easing programs. As of last Wednesday, that figure was $1.7 trillion dollars.”

Why does the NY Fed reward JPMorgan instead of rein them in? Pam Martens does some investigative reporting:

“…. As JPMorgan was building up an unmanageable position in illiquid, toxic derivatives in a dark corner of its trading empire in London using the insured deposits of its banking customers, its Chairman and CEO, Jamie Dimon, was sitting on the Board of Directors of the New York Fed. As it was being investigated…Jamie Dimon continued,…serving out his two terms which ended at the end of 2012. …. JPMorgan has owned up to $6.2 billion in losses from those derivatives.

While all of this was happening,…Bill Dudley was serving as the President of the New York Fed and his wife, Ann Darby, a former Vice President at JPMorgan, was receiving approximately $190,000 per year in deferred compensation from JPMorgan – an amount she is slated to receive until 2021 according to financial disclosure forms.

According to the New York Fed’s web site, its “employees are subject to the same conflict of interest statute that applies to federal government employees (18 U.S.C. Section 208).” Under that statute, a spouse’s conflicts become the conflicts of the employee.

…. I asked the New York Fed…if it had changed its position on allowing this compensation to continue to flow to the household of its President. I was informed that “after further discussions and analysis by the New York Fed’s lawyers, it was agreed that Ms. Darby’s fixed deferred compensation from her previous employer neither posed a conflict nor required a waiver.”

Where is congressional oversight?

The Fed buys US debt, which appears to be illegal. Zerohedge tells us how it is done:

“The Fed’s charter prohibits it from directly purchasing bonds or bills issued by the US Treasury: that process is also known as monetization and various Fed chairs have repeatedly testified under oath to Congress that the Fed does not do it. (Emphasis mine)

…. But what if there is a several day interval between Treasury issuance and subsequent purchase? Well, that’s perfectly legal, and it’s something the Fed has done, …. (and) is continuing to do….

…. On December 19, just three days after the above T-Bill was issued and on the very day the issue settled, dealers flipped the same Bills they bought from the Treasury back to the Fed for an unknown markup.”

Using a technicality to get around the law, the Treasury sells its debt to Primary Dealers. The Fed creates money out of thin air three days later and buys the debt from the Primary Dealers at a markup price. A win/win – for everyone except the taxpayers.

In 2015, the House of Representatives passed a bill to audit the Fed (A real audit has never been done). Fed chair Janet Yellen vehemently opposed the bill. Her implied threat worked, the Senate was unable to pass the bill.

The Fed will continue to do the bidding of the top banks. When they win, they wallow in profits, and when they lose the taxpayers cover their losses.

Does congress have the courage to reinstate the Glass-Steagall Act and separate the casino banks from commercial banks and get the taxpayer off the hook for banking losses?

While Congress fiddles, the Godfather is smiling….

I’m quickly learning lessons that all who have had cancer already know. I recently had a follow-up pet scan and the good news is there is no cancer in the head and neck area where I was treated. They did find three small spots on my lung and are trying to figure out what they are.

Chuck Butler candidly told me that every cancer patient, whether it is being dealt with, in remission or currently gone, will always worry about what the next test will bring. His message was clear, live and enjoy every day you can.

The Cubs’ first full-squad workout is February 17th, so baseball will soon be upon us. That makes me smile.

Four generations of family will be here in March. My youngest great-grandson, Nolan, lives in northern Wisconsin among Brewer fans. By some miracle, he is a Cub fan. I’m hoping to take the family to watch a morning workout at Cubs Park. I doubt the little ones would sit through an entire game, but attending the workouts would be something they would long remember.

Who knows, maybe we can convert his brother Wyatt at the same time?

Friend Courtenay W. supplies us with some baseball humor.

And my favorite, spoken like a true Cub fan: