The Seeds are Sprouting for the Next Real Estate Bust 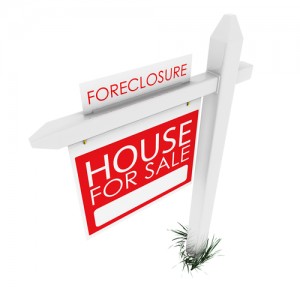 “First-time homebuyers are finally jumping into the U.S. property market.

….Originations of FHA-backed mortgages, used predominately by first-time buyers, were up 54 percent in September from a year earlier….

By December, the FHA insured 22 percent of all loan originations, up from 17 percent a year earlier, according to data compiled by Ellie Mae Inc.”

“(The) Obama administration, in January 2015, reduced mortgage-insurance premiums for FHA loans. That lowered the cost of getting a home loan and brought in at least 75,000 new borrowers with credit scores of less than 680…

…The rate of FHA lending, which had been in decline through most of 2014, tripled the month after the insurance premium was cut….” 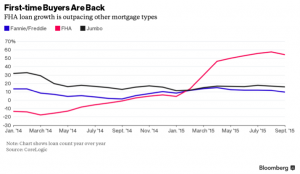 Perhaps new homeowners are excited because they can get an FHA mortgage with as little as 3% down and credit scores below 680, but as a taxpayer I’m sure as hell not happy about it. Another taxpayer bank bailout package will surely follow.

Fundamental rules in problem solving – If you don’t fix the cause:

The underlying cause of the 2008 real estate bust is not something the political class or mainstream media chooses to dwell on. Investors need to understand the cause; however it is not likely to be fixed. Protecting ourselves should be our focus.

The premise behind the Troubled Asset Relief Program (TARP) and subsequent bank bailouts was to give the treasury department money to buy illiquid mortgage backed securities to restore liquidity to the financial markets.

What was not widely reported was why there were so many toxic mortgages in the first place.

Craig Smith spells out the history in Chapter 5 of his book, “Don’t Bank on It” very well.

“…the seeds of today’s Great Recession were planted by President Jimmy Carter. …In 1977 Mr. Carter signed into law the Community Reinvestment Act (CRA), which would weaken banks and ultimately lead to the housing value meltdown and economic near-collapse of 2008.”

To save readers a lot of political rhetoric (that we can do nothing about), the CRA led to the Federal Government demanding banks lower their lending standards so more buyers with questionable credit could qualify for loans. Banks were given CRA ratings based on how many loans were made to what is now called sub-prime borrowers. The more of these type loans the bank made, the higher the rating.

“Banks given a “poor” CRA rating could be refused permission to expand as their competitors did, or to add new branches. “Banks that got poor reviews were punished,” wrote University of Texas economics Professor Stan Liebowitz. “Some (banks) saw their merger plans frustrated; others faced direct legal challenges by the Justice Department.

…Making loans on the basis of politicized social engineering rather than credit worthiness is never a sound business decision, and it always creates unintended consequences.”

The government allowed the banks to package and sell their Mortgage Backed Securities (MBS). Many ended up being owned by Fannie Mae and Freddie Mac.

With the banks no longer concerned about creditworthiness, they wrote loans to most anyone, repackaged and sold them. These were referred to as “NINJA loans”, (No Job or Assets) or “liar loans” – in which buyers, not required to provide documentation, simply lied about their income.

Faced with billions in defaulted loans, in September 2008 both Fannie and Freddie were placed under the conservatorship of the Federal Housing Finance Agency (FHFA). In 2010 the government announced that it was bailing out Fannie and Freddie to the tune of about $150 Billion.

The massive bank bailouts came on the backs of taxpayers. Not only did the government borrow money to keep the banking system solvent, they also dropped interest rates costing seniors and savers trillions of dollars. Interest that should have been paid to hard working Americans was given to the banks and government in the form of lowering their interest expense.

Blaming the banks for the housing bust is like the National Transportation Safety Board ruling a mid air collision “pilot error”, while failing to mention both aircraft were in full instrument conditions, at the altitude and course heading the air traffic controller assigned to them. The only error the pilots made was following the instruction from the government.

Governments throughout history never take the blame; hide the truth from the citizens and tax the hell out of them to cover their mistakes. That is not going to change.

“…(I)n 2013 President Obama had resumed strong-arming banks to do such lending…and by mid-2014 banks were, indeed, giving away subprime mortgages again in growing numbers…. Welcome to CRA 2.0.”

Just how safe is a 3% down payment FHA mortgage to someone with a credit score under 680? A credit score of 680 is on the lower edge of good with fair and poor following closely behind.

I found this comment on creditscoring.com both amusing and sad,

Kenneth Harney, Washington Post: “For borrowers with scores over 660, Freddie Mac presumes they’re willing to repay the loan. (emphasis mine)”

Pardon me! Why would anyone lend money if there were any doubt the borrower was not highly motivated to repay the loan? Perhaps a larger down payment would give them greater motivation to repay their debt.

This is certainly a political hot potato, and not the purpose of this article. I have yet to hear any candidate mention the underlying cause of the problem – much less action being taken to prevent taxpayers from having to bail out the banks in the future.

If the cause is not addressed, eventually we will have another boom and collapse. No one knows how long it will take. Who cares? Right now our only choice is to protect ourselves from getting caught in the crossfire.

I hope the jump in first time buyers helps them get started; however forcing banks to lend to marginal buyers, with little money down, never ends well no matter how many times you try. While the political class may never learn does not mean we have to repeat the same mistakes. Friend Dennis A. sent me a graphic that is worth 1000 words. 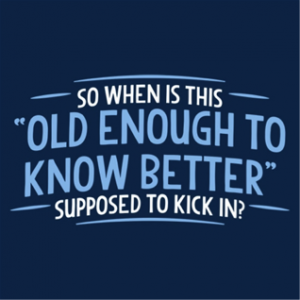 Now is as good a time as any.

With Easter weekend behind us, the mass migration of snowbirds from the southern climates heading north has now begun. The roads and restaurants are not quite so crowded.

Here in Arizona we have had to turn on the air conditioner a few times in the late afternoon. It will be a couple more months before the second migration begins and those in the northern climates see license plates from Florida and Arizona, as retirees try to escape from the extreme heat of the summer.

Friend Bob D. sent along some “adult truths” for us to enjoy:

This one hits very close to home for me personally: