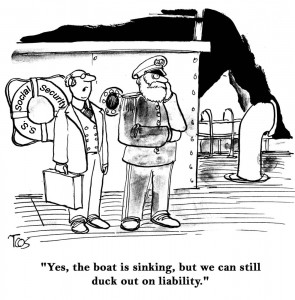 The 2015 Social Security and Medicare Trustees Report was released in late July. It starts off with an urgent warning for everyone.

I’ll skip the fuzzy-math and get to the point. They conclude the system is broken and, if we are lucky, it might work until 2034. In about 20 years, benefits should be around 21% less than what is expected.

David Stockman followed with an analysis The 2015 Untrustworthies Report – Why Social Security Could Be Bankrupt in 12 years. Stockman estimates the shortfall will be 33% as soon as 2026. He attacks the government’s fuzzy-math. One example:

“To wit, the untrustworthies who wrote the report assumed that nominal GDP would grow at a 5.1% annual rate for the next 12 years. Yet the actual growth rate has never come close to that during the entire 21st century to date. At best these people are dreaming, but the truth is they are either lying or stupid.”

Stockman believes the economic crisis ahead of us would be of the magnitude of the Civil War or the Great Depression.

Let’s keep the politics out of the discussion

Personally, I don’t much give a damn who has the slickest accounting pencil – or who may be right. Somewhere between 2026 and 2034, hard-working Americans who paid into a pension fund will not get the benefits they are counting on. That is a real problem, not only for the retirees, but also future generations having to make good on promises they did not make. In many cases, their futures were mortgaged long before they were old enough to vote.

The elders made pension promises. They allowed the politicians to underfund them and squander the contributions instead. We were taught to respect our elders who left the world a better place for the next generation to grow and build upon. Now the next generation will be left trying to clean up the mess baby boomers left behind, while providing for their family and their own retirement. If that is not setting the stage for generational warfare, I don’t know what is. The heck with Medicare coverage, let the old farts die and get them off the payroll.

“Lawmakers should address the financial challenges facing Social Security and Medicare as soon as possible. Taking action sooner rather than later will permit consideration of a broader range of solutions and provide more time to phase in changes so that the public has adequate time to prepare.”

Gimme a break! For decades every politician tells us that he/she will fix social security if we vote for them; yet it never happens. The sacrifices the public would have to make would be so harsh they would be fired in the next election, and they know it. Does anyone ever see congress actually working together for the good of the American people as opposed to taking every crisis and turning it into an opportunity for political gain?

It is unrealistic to assume the government will make good on promises that are financially impossible to keep. The US debt clock tells us the unfunded liabilities are now $97 trillion, just shy of $820,000 per taxpayer. The slick penciled government accountants can try to paper things over but they are just kicking the can down the road until the day of reckoning finally comes.

The government caused the problem and looking at them to fix it is fantasy. The “tooth fairy” will not leave $97 trillion under our pillow. Time for plan B….

3 steps to protect yourself

1. Save above and beyond your social security. While our government has shown they will not act, we can choose to take control of our own destiny. Step one is increasing our personal savings above what is taken out of our income by the government.

We recently toured the Toyota Assembly Plant in Evansville, IN. They have a terrific 401 (k) program where they have an employer matching program up to 6% of your total salary. That is free money; you save 6% of your salary and 12% lands in your 401 (k). Max out your 401 (k) and any other savings plans you have available.

That means giving up a lot of “stuff” and living below your means. Get out of debt and stay that way. For a “buy now and pay later” society that is a real challenge. What we save and spend are still under our control. Things are not hopeless. Focus on things you can change now.

2. Investigate your social security options. If you have not done so, I suggest you SIGN UP for our free newsletter. Included in your package is our free report, “An Honest Persons Guide to Social Security“.

Many pundits recommend deferring your Social Security payments until the last possible minute. The benefits increase each month as an incentive to do so. While they can run the numbers and show you the value in waiting, it is all based on one assumption: You do not anticipate the government reducing benefits, means testing social security, taxing a larger portion or changing the program in any way. There are times when deferring your social security makes sense; however there is a huge risk in assuming the government will not change the program.

If you feel there is a reasonable chance the program will change over the next few years, you may want to factor that into your “when do I take my benefits?” decision.

3. Invest in assets that protect you from inflation. Unlike businesses, federal governments do not always collapse when they are bankrupt. Instead they inflate their currency until it is almost worthless and then pay their creditors (including pensioners) pennies on the dollar.

While many pundits are declaring the demise of gold, silver and precious metals, having assets that are historical hedges against high inflation is a must. It makes little sense to build up your 401 (k) and other savings and have it invested in one currency. A politician, with the stroke of a pen, can render the buying power of that nest egg virtually worthless overnight. Wake up and heed the warning! The government report warns of an impending crisis. We should expect the government to confiscate as much wealth as they possibly can through inflation. If we are wrong, having more money than we need is not a problem.

Debating who has the slickest accounting pencil, and when the first check will bounce is a waste of time. That’s like standing on the Titanic arguing over the exact moment it will totally be underwater. When you are quickly sinking, as the Social Security trust fund is doing, who cares? There are much more important things to do.

Savvy Americans understand the problem and will look after their family now and in the future. The have learned to depend on themselves and never count on the government. Most of those promises are made by politicians looking for your vote, who will be long gone before they must make good on them. We must understand our priorities and focus on the task at hand. You can’t say we have not had ample warning – very loud and clear. It’s time to heed the warning and protect your family.

Leisa Peterson interviewed me as part of her “Art of Mindful Wealth” workshop. She is a licensed Certified Financial Planner who focuses on the practical side of retirement, much more than just making sure the numbers work out. I really enjoyed this interview and I encourage you to check it out.

This week we are headed back across America to Arizona. The grandchildren are back in school, football practice is in full swing and fall is on the way. We are looking forward to spending our first fall season in Arizona. I’m told the temperatures are moderate and it is a beautiful time of the year.

This is our first experience living west of the Central Time Zone. I look forward to being able to stay awake for the last half of Monday Night Football.

A reader sent me the following in response to last week’s comments about the Cubs eventually winning the World Series. 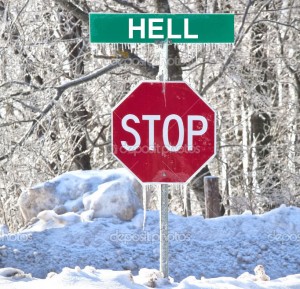 I guess anything is possible…