There is a Sucker Born every Minute 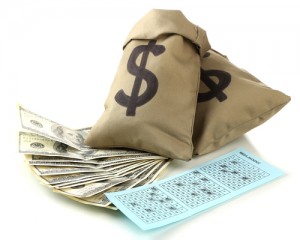 We had just moved to Texas and were getting settled into our new home. I heard my wife Jo screaming, “Oh my God!, Oh my God!” I raced down the stairs to find out what was wrong.

She had the Sunday paper open on the counter, breathing heavily. “Look, look”, she exclaimed as she held a lottery ticket on the paper. For a brief moment I thought we hit the $60 million jackpot. In those days the lottery was just six numbers, hit them all and you win. Our ticket had the first five in the string, missing the final number by two. We won $1,500 – not a life-changing event.

It is 20+ years later and we occasionally buy a ticket when the jackpot gets huge as it did recently. I’m sure we have lost our $1,500 by now.

Any pool shark or golf hustler will tell you the first step in setting up your mark is to let them win once so they think it can be done. Soon the bets increase and you have them hooked.

Bookies refer to “Sucker bets” as bets created to lure inexperienced players into betting against large odds, blinded by the offer of fast money and large payoffs.

While P.T. Barnum, of Barnum and Bailey Circus fame is generally credited with the saying, “There is a sucker born every minute”, others attribute it to Michael Cassius McDonald, described as a late 1860s Chicago “bounty broker, saloon and gambling-house keeper, eminent politician, and dispenser of cheating privileges”.

The government now operates the biggest sucker bet game in the world – the lottery. The recent $1.5 billion Powerball prize is a prime example. P.T. Barnum would be envious.

The Multi State Lottery Association administers the Powerball. Each state profits from tickets sold within their state. They band together for the jackpot while each state pays out the lower-tier prizes.

The association mandates, “The prize pool for all prize categories shall consist of fifty percent (50%) of each drawing period’s sales….”

While the hucksters tout a $1.5 billion prize, the cash option is $930 million – half the prize pool. To receive $1.5 billion the government spreads the payout over 30 years. The state governments pocket the other half – $930 million, and quickly spend it. 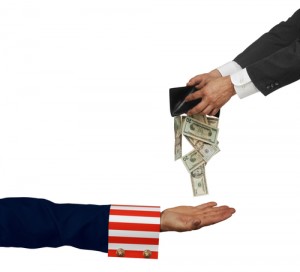 Winnings are taxed as ordinary income. While income tax brackets are progressive, the top tax rate of 39.6% begins (for a married couple filing jointly) with earnings over $465,320. With Powerball or Mega-Million winnings in the tens (or perhaps hundreds) of million of dollars, I’ll keep the math simple and just use the 39.6% rate. Uncle Sam will collect approximately $368 million in taxes from the recent lottery ($930 million x 39.6%) if winners choose the lump sum option.

How much have the hucksters collected so far? The state governments siphon off 50% of the prize pool and the IRS grabs 39.6% of the other half for an effective tax rate of 69.8%. States with income taxes will take even more. USA Mega provides a good tool for estimating the additional state income taxes.

The jackpots get bigger

I recently wrote about the Powerball lottery changing the game by adding ten numbers to choose from. The odds of winning rose from one chance in 175,223,510 to one in 292,201,338. I knew record jackpots would soon follow, and they sure did!

The huckster’s dreams come true. They want real people to win the big prize and get all the free publicity that accompanies it. The nation was mesmerized with lottery news for a couple of weeks. The mantra, “somebody has to win” is part of the advertising appeal. The really big winner is the state and federal governments. No matter what size the payoff is, the governments take 69.8%.

The voice of experience

Billionaire Mark Cuban offered some good advice for the winners:

There are many sad stories about lottery winners blowing all their money and ending up broke. If you choose the 30-year payout, you are making it easier to say NO and insuring against yourself blowing the money all at once – but at what cost?

If you were the sole winner of the recent $1.5 billion lottery, your annual payment would be $50 million for the next 30 years providing a rich and famous lifestyle. The two HUGE uncertainties are taxes and inflation.

No one knows if, or how much taxes might rise over the next 30 years. Uncle Sam can change the rates at will. In an interview with CNBC’s John Harwood, presidential candidate Bernie Sanders said he could back a 90% top marginal tax rate.

The graph below outlines the top marginal tax rates since 1955. I can confidently predict that in the next 30 years the political class will certainly discuss tax increases – particularly targeting the top 1% in income. 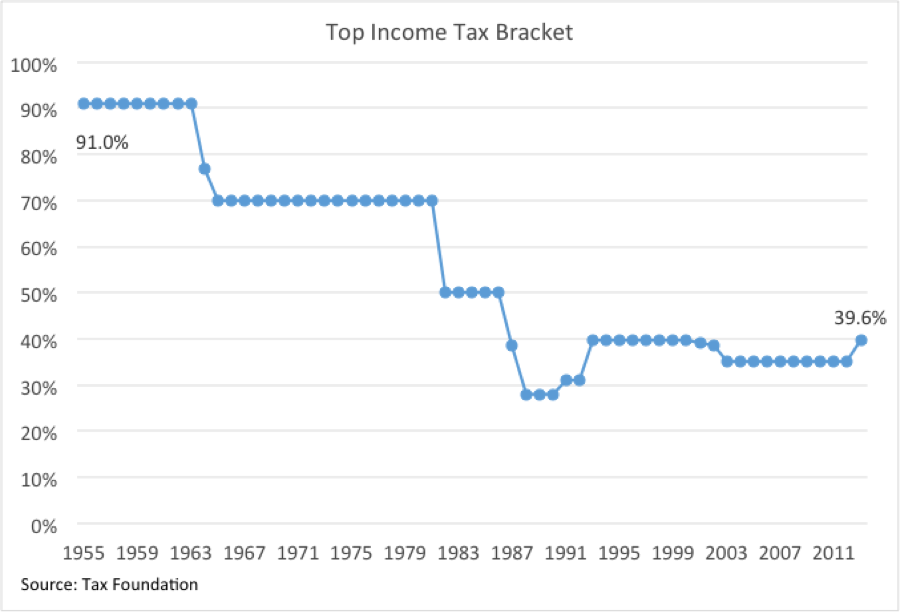 Each 2% increase in the tax rate will clip an additional million dollars a year from the lucky winner.

With each passing year inflation will eat away at the buying power of your money. How much is also a HUGE unknown. The Federal Reserve is targeting 2% inflation. If they hit that target and held it there, how much buying power would you lose? 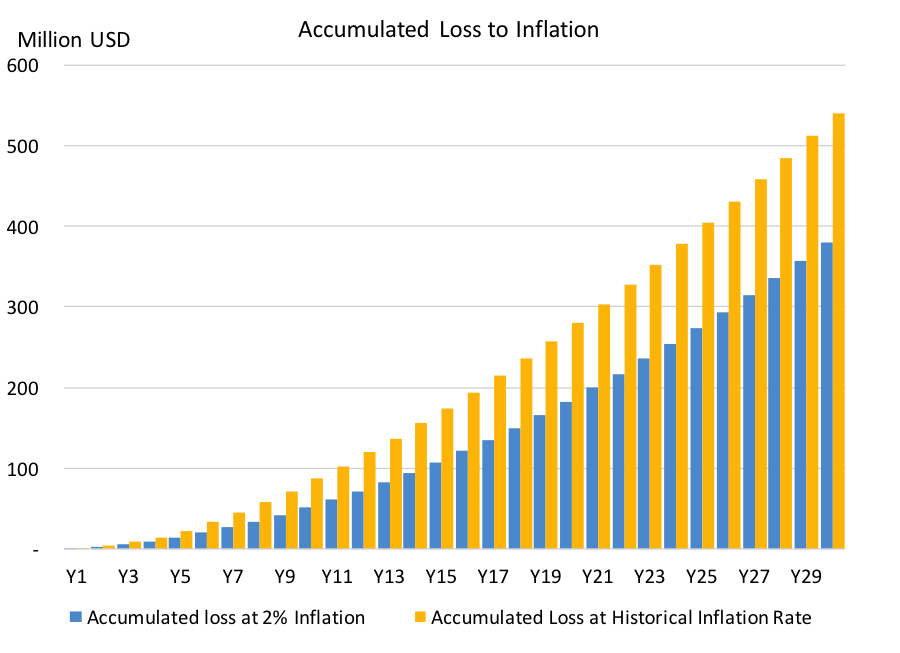 I asked good friend, Andrey Dashkov, CFA, to graph it out. He tells us, “The final payout would be equivalent to $27.6 million today; the remaining $22.4 million would be eaten up by inflation. Total loss to inflation over 30 years would be $380.2 million.”

He also calculated the loss based on the actual inflation rate for the 30-year period from 1985 to 2014. “If you won the $1.5 billion lottery at the end of 1984, your payments started one year after that and inflation followed the same rate it has for the past 30 years, the payout at the end of 2014 would be equivalent to about $21.9 million in 1985 dollars. The total loss to inflation would be $540.8 million.”

If you choose to take your payout over 30 years you are placing a multi-million dollar bet on the idea that neither inflation nor increased taxes will materially affect your payout. Guess wrong and you could lose $500 million or more in loss of buying power.

Assuming the risk is the trade-off for insuring that you don’t blow your money all at once. If you are unable to say NO to family and friends, or are unwilling to hire competent tax and investment professionals and follow their advice, you are a good candidate for the 30-year option despite the huge potential risk. You know you will receive money annually for the 30-year period.

I have a difficult time with those acting as their brother’s keeper saying the lottery preys on the poor. We are all responsible for our own behavior.

However, as I stood in line I saw people in front of me spending $50 or more on tickets. I wanted to stop them and explain the real odds. You have a better chance of getting hit by lightning than winning the lottery. As they say in very small print, “play responsibly”. Don’t turn a cheap fantasy into an expensive one. The odds are overwhelming – be honest with yourself – you will NOT win. You can have just as much fun dreaming about what you would do with the money by owning one ticket as you can with 25.

The more you need the money, the more the reason you should NOT buy a ticket. If a person is truly strapped for money, wasting the money for a fantasy dream is the wrong thing to do. If you are broke, buying lottery tickets or any form of gambling is going to keep you there.

Beat them at their own game. The hucksters raised the odds of winning the Powerball by over 100 million to one. Your odds of winning $40 million are the same as winning $1.5 billion. Their goal is to get people to play regularly. If you bought one $2 ticket for each drawing you would spend $208/year. The real fun is dreaming what you would do if you won $100+ million. You don’t have to buy a ticket for every drawing.

A sucker may be born every minute but one does not have to die every minute. The hucksters promote “something for nothing” and that is not reality.

Despite astronomical odds, you can’t win without a ticket. Have fun, but don’t get overwhelmed. $2 is the right price to pay for dreaming about a better life, nothing wrong with that. Tune out the hype and if you play, play responsibly.

Congratulations to Carolina and Denver who are headed to the Super Bowl. I hope the game is close and exciting. The NFL does a bang up job of marketing. Since the first Super Bowl in 1965, watching the game has become a tradition in many parts of the world.

It’s still pale in comparison to the World Cup of soccer. I traveled the world for 30+ years and was amazed at the worldwide interest. It made no difference what country I was in, or what time of day or night the games were on television, I had to adjust the schedule of my training classes around the games.

The most passionate group I have ever seen was in Argentina shortly after the Falklands War. Argentina had invaded the Falkland Islands trying to gain sovereignty from the British. The British dispatched a naval task force and after a couple of months Argentina surrendered and the island remained under British control. The game was more than just a football game. Argentina’s star Diego Maradona said, “It was as if we had beaten a country, not just a football team….” The place went wild when they won.

When the Cubs finally win their first World Series in over a century, I suspect the celebration will be just as emotional for Cub fans. I hope I am still alive to find out.

Last weekend the eastern part of the US was blanketed with a huge snowstorm – Jonas.

It showed a man all bundled up shoveling his front walk with a couple feet of snow. His wife is standing on the front porch telling him he has a phone call. He shouts back, “If it’s my brother in Florida, I don’t want to talk to him right now!”

Sometimes it takes a major weather event to remind us all of the fact we are not in charge. I heard that even the president’s plane was grounded.