Thinking About Retiring? Better Think It Through! 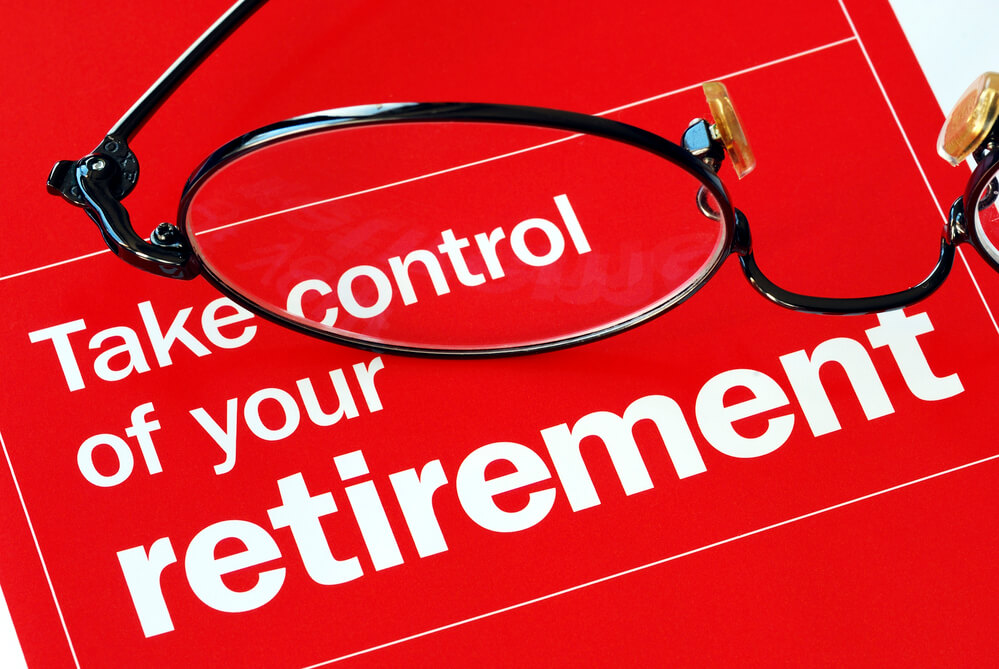 A friend recently asked me, “How is anyone going to be able to retire?” Since 2008, the retirement landscape has changed radically.

This Atlantic article, How Retirement Was Invented provides some history:

“In the United States, starting in the mid-1800s, certain municipal employees…started receiving public pensions…. By the 1920s, a variety of American industries…were promising their workers some sort of support for their later years.

…. The federal government started creating what would become social security…. When the Social Security Act was passed in 1935, the official retirement age was 65. Life expectancy for American men was around 58 at the time.

Almost immediately…Americans started to live longer. By 1960, life expectancy in America was almost 70 years. All of a sudden more people were living past the age where they had permission to stop working and the money to do it. Finally, they began to retire in large numbers-to stop working, to embrace leisure….

For a few decades, older Americans lived without working, enough that we’ve come to expect that we should be able to retire, even if that may no longer be financially possible for many.” (Emphasis mine)

Most people expected to retire at 65, with an employer funded pension, guaranteeing them benefits for the rest of their life.

In 1978 congress passed legislation (Section 401k) allowing employees to avoid being taxed on deferred compensation. Most of corporate America got out of the pension business, grandfathering in older employees, and switching younger people to a 401k. Some offer matching provisions, encouraging employees to save for their retirement.

For the 401k program to work, financial planners preached “the magic of compounding”. The mantra was, “Save now, let your money grow and you can retire comfortably.”

Live off the interest; NEVER touch the principle. This was the holy grail for my parents. Interest from their Certificates of Deposit (CDs) coupled with their social security provided them all they needed.

You can always count on 6% safely. You worked hard to save; don’t lose your money. From late 1969 until mid-2000, treasuries paid 6% or more, with FDIC insured CD’s and top-quality bonds a bit higher.

100 minus your age. If you were 65, 65% of your portfolio should be in safe fixed income investments, and 35% in the market to hedge against inflation. If you bought solid dividend payers, they would also provide income.

Earn 6%, withdraw 4%, and leave the remainder for growth. This was the rule for withdrawals from your IRA or 401k each year, believing you would NEVER run out of money.

When the Fed jumped in during a recession, interest rates came down.

The world changed with the 2008 bank bailouts. Check the red line below, it’s scary! 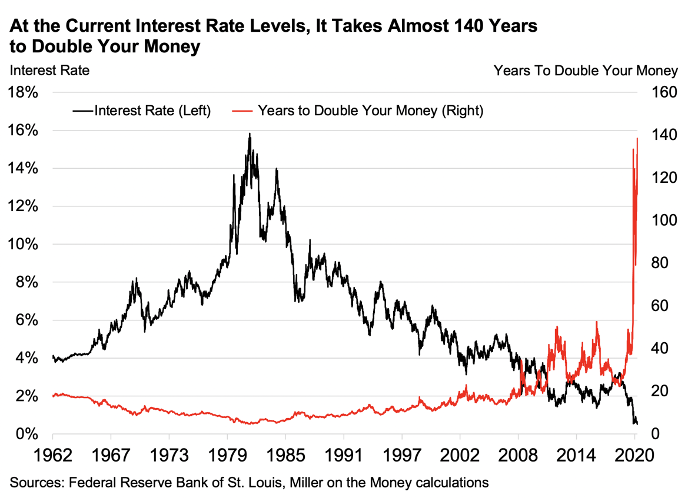 Central banks, with government support, cut interest rates to historical lows. They not only don’t keep up with inflation, they also make it impossible to compound your savings – without taking some previously unnecessary risk.

It gets worse. Wall Street On Parade reports, “As Retirees Anguish Over a Sub One-Percent Treasury Note, U.S. Companies Are Suspending their Dividends at a Rate Not Seen Since the 2008 Crash.”

Most pension funds are woefully underfunded; they can’t earn enough to fulfill their promises without taking risks that could get the managers sued.

Expect the Social Security retirement age to be moved back, all benefits taxed, means testing for benefits and it will NOT keep up with inflation (despite the indexing provision).

Expect the government to inflate their way out of debt, just like every country with fiat currency – a politician’s paper promise.

How to get the job done

If you don’t have the benefit of a guaranteed government pension, there are some things you can do. It’s challenging, but not impossible.

Don’t give up! Previous generations lived through famine, depression, pandemics and survived. They changed with the times, went about their business….and thrived. You will prevail!

Expect an economic downturn. Chuck Butler adds, “The Bank for International Settlements (BIS) told us many years ago that “When government debt exceeds 85% of GDP, economic growth slows.” When the debt level grows too large, the economy has to slow down… We’ve moved into the 130% of GDP (not using the Covid-19 GDP numbers).”

Despite the political rhetoric, it’s just a matter of when the downturn arrives. Be prepared, not surprised, which leads to the next point.

Get out of debt as quickly as you can. I recently wrote about “Debt Slaves” and how to escape the trap. Get started now!

Downsize and be done with it. Your retirement savings probably won’t meet the safe 6% projections you counted on. Set your retirement lifestyle for what you can afford.

The 2017 net worth calculator indicates a net worth (excluding your home) of around $2.5 million puts you in the top 5% category. If you saved that much, you did good!

Prepare a retirement budget and make it work.

Keep working as long as you can. Find something you enjoy, that is not stressful. We have retired friends who love to garden. They grow herbs and spices, selling them at local farmers markets. Their income, coupled with social security, means they don’t have to dip into their savings to live. The longer you work, the better; just make it fun!

Build a conservative investment strategy for today’s world. Safe, fixed income products will not beat inflation. If you want 4% interest or more, the probability of default rises significantly. Expect bond defaults to start rising. Don’t get caught chasing yield and then losing out.

Use short term CD’s for cash holdings. Risk as little as possible, while providing enough income to pay the bills. Avoid dipping into savings as long as possible.

Find solid dividend paying stocks. Some companies do well in bad times and continue paying their dividends. Seek them out, invest in them and monitor your investments closely. Get good help in finding those opportunities.

Avoid catastrophic losses. While you must take risks to grow your wealth; preservation of capital is critical. Set stop losses where appropriate, and keep them up to date.

Allocate a portion to metals and metal stocks. Inflation is a major concern. I recommend owning metal and metal related dividend paying stocks. The mining stocks not only keep up with inflation, they also provide yield.

Jeff Clark reminds us, Silver is the best performing asset class of 2020, gold is 2nd and Nasdaq 3rd.” Gold will never go to zero….

Friend John Williams shows us gold has outperformed the Dow since January 2000. 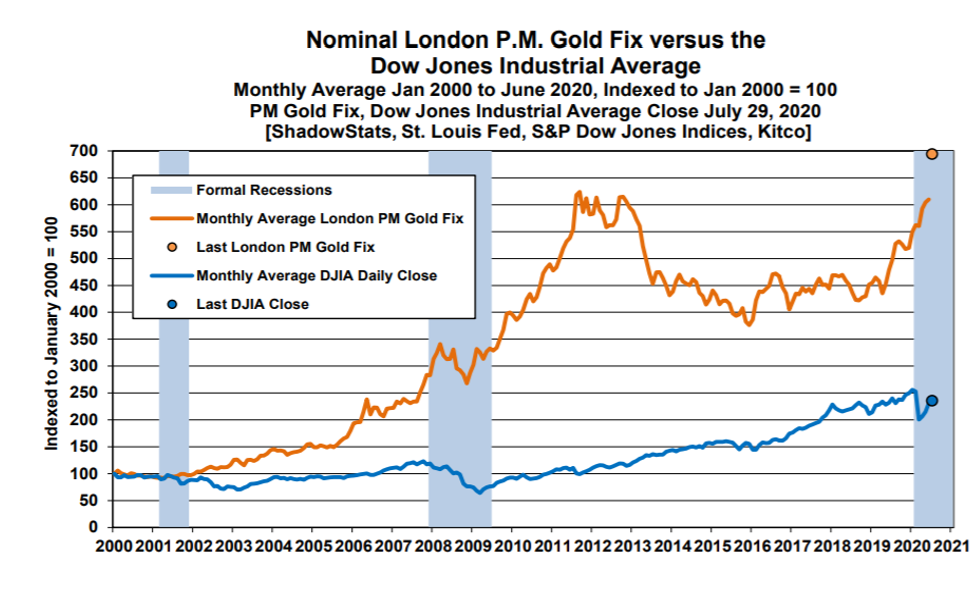 Look for bargains. One of the best investment books is Benjamin Graham’s book, “The
Intelligent Investor”. Investopedia tells us:

“The investor should look for opportunities to buy low and sell high due to price-value discrepancies that arise from economic depressions, market crashes, one-time events, temporary negative publicity, and human errors. If no such opportunity is present, the investor should ignore the market noise.”

Here is one example. Silver dropped to $12.04/oz. in March and has more than doubled since then. WPM has risen ahead of the silver price as investors are anticipating a further rise in price.

If you see a bargain, don’t go overboard, but act on it.

Is it possible for the middle class to retire?

Sure, those that educate themselves, realize they MUST manage their money conservatively and live within their means will do just fine. IT CAN BE DONE!

Hurricane Laura did some terrible damage. I’ve ridden out a few hurricanes, evacuated for others and visited damaged areas shortly after they have come ashore.

In 2004, we built a home in Lakeland, FL. Three hurricanes passed over central Florida during the construction. The first (Charley 8-13-2004), made landfall at Punta Gorda, FL, headed north to Lakeland, and back out to the Atlantic Ocean.

We drove to Punta Gorda and followed the path up US-17. The destruction was amazing. There were FEMA trucks everywhere, an armada of utility trucks from several states repairing power lines, and thousands of workers cleaning up debris.

I have two vivid memories. We drove through downtown Punta Gorda. Power had been off for a couple of days. All of a sudden, our eyes started burning. We put handkerchiefs over our nose and mouth. It was the smell of the food in the stores that was rotting. I can’t imagine what the cleanup crews faced when they went in.

We approached Arcadia and there was a restaurant with all the windows blown out. It was really strange as all the tables were set, silverware and glassware had not been disturbed. Why is it that I can close my eyes and still see it in my mind?

When friends from CA questioned our sanity of living in Florida with “all those hurricanes”, I would ask them when was the last time they had 48 hours advance notice of an earthquake?

While the damage is huge, generally the death count is small. Four of the top five deadliest hurricanes in US history were over 90 years ago. That is a testament to the early warning systems.

It’s interesting to see people come together and within a couple of years things are rebuilt, better than before. It’s just part of the American Spirit.