It’s Time For A Global Perspective 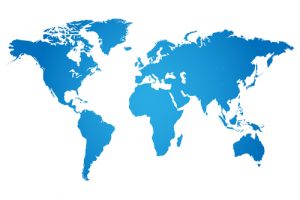 In a recent interview with Chuck Butler, he warned us that we may be in for a significant “Minsky Moment”.

The federal reserve is raising interest rates and unloading trillions in their US debt holdings. Countries that normally buy our bonds are slowing down their purchases or reducing their holdings. With fewer buyers, what happens if interest rates continue to climb?

Chuck then sent me an article by David Stockman which concerns me; the issues we discussed are happening worldwide.

David Stockman presented an eye-popping graph. Debt being held by central banks has tripled in ten years to well over $20 trillion. 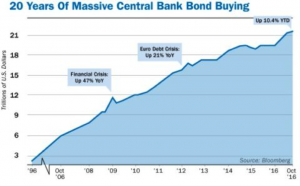 If world-wide central banks are working in unison unloading debt – the Minsky Moment could be much bigger than I originally imagined.

It’s time to get some input from someone outside the US who is involved in global finance on a daily basis. I contacted Rob Vrijhof, President and Senior Partner in Weber Hartmann Vrijhof & Partners Ltd. located in Zurich, Switzerland.

DENNIS: Rob, thanks for taking the time for our education. Several experts are warning about the world-wide, staggering government debt. Central banks have reversed course – some have stopped buying, while others are selling off some of their holdings.

What are you seeing in Europe, China, Japan and elsewhere?

ROB: Thanks for inviting me.

The debt that has been building up by the world national banks is indeed staggering.

After the real estate bubble burst in the USA, enormous amounts of money created out of thin air were being pushed into the system trying to avoid a complete collapse of world economies. It seems that national banks, working in tandem, saved us from a total downfall – with interest rates falling into negative territory in Europe.

Reality is now kicking in and these enormous accumulated debts will eventually have to be paid back. The big question is how this will be done. This question is faced not only by the USA but also by Europe and Japan to name just a few.

This presents a real challenge for central banks for the years ahead. Higher interest rates are poison – perhaps it could be done through inflation.

Unfortunately, we strongly believe there will be no happy end to this party of cheap money.

DENNIS: The law of supply and demand hasn’t been repealed. When supply of debt instruments (bonds) is higher than demand, interest rates will rise. Interest rates on US treasuries have already doubled since July 2016.

A two-part question. What are you seeing outside the US? Are the days of negative interest rates disappearing?

ROB: The interest rate hikes started in 2017 by Madame Yellen of the Fed. We believe new Fed chairman, Mr. Powell, will continue the process. We anticipate he will increase rates by 0.25% in March followed by another two hikes in 2018. While he says he will keep a close eye on inflation, we believe the 2% target will be shuttered – we may be in for a period of higher inflation.

The European Central Bank headed by Mr. Draghi is under no pressure to hike interest rates. We feel he will wait and we expect the first rise in interest rates in Europe during the fourth quarter of 2018.

DENNIS: Rob, I’m concerned about the bond market. Central banks alone hold over $20 trillion in bonds that pay interest rates well below the market. What are you telling your clients who may be holding long-term bonds?

Wouldn’t inflation have to be considered?

ROB: We’ve been telling our clients to use any rally on long-term bonds as an opportunity to sell since we strongly believe this everlasting bull market in bonds could be coming to an ugly end.

Yes, inflation is a big concern. We anticipate a revival of inflation with most of the world economies blasting ahead at full speed, wages and interest rates moving up.

We should all hope that it will not be galloping away since high inflation numbers could also be bringing the ugly “R” – word (recession) back into circulation.

DENNIS: I’ve wondered if I would ever see safe, high quality 6% bonds again in my lifetime. When we did our retirement projections, 6% was a given. Do you feel it’s possible to return to those days? At 6%, how could debtor nations possibly afford to pay the interest on their current debt levels?

ROB: This is a very tough question at my age. It seems not very long ago that we were getting well above 6% interest on Swiss Government bonds, this was back in 1991.

To address your question, yes interest rates could be heading up to these levels during the next few years; helping lenders and hurting borrowers.

You are correct, the gigantic debt of our central banks will then also have to be paid back at a much higher interest rate – which could end in a catastrophe. It would probably mean higher taxes and inflation.

DENNIS: It looks like we’re anticipating a huge Minsky Moment. A bond market collapse, high inflation, and rising interest rates will certainly affect businesses all over the world and their respective stock markets.

No one can time the market; we expected the issue of skyrocketing debt to come to a head years ago. If/when it does happen, there will have to be some real bargains for investors who have cash and were patient.

What are you advising your clients?

ROB: There are times where cash could or should be looked at as an investment and we strongly believe this is the time to have cash on the side. This doesn’t have to be in US Dollars it could also be in Swiss Francs, Pounds or Euros.

We are currently underweight in equities and overweight in cash, foreign currency bonds, and precious metals.

We do not know when this party will end but we want to make sure that we are not the last ones to exit.

You have to stay ahead of the crowd, patience is a virtue and will be rewarded. The stock markets might be holding at these skyrocketing levels for another few quarters, but a big correction is in the cards, then be ready to go all in.

DENNIS: Market historians like to point to an event that sparks a crash. What do you think readers should be looking for? Are there any countries or markets that you feel might be leading indicators of what’s to come?

ROB: What we’ve been seeing since the beginning of the year is indeed very scary, with the Dow dropping 1100 points, and then ending up with a small gain in only one trading day. We do feel a large correction is in the cards in the not too distant future for many reasons.

Pick any of the above, but then again it might come from a completely different angle. We just don’t know. We will be told by historians after it happens and that won’t be very helpful.

It appears that a serious correction is imminent and that investors need to make wise decisions now.

DENNIS: Rob, one last question. I’ve had some readers ask if you ever come to the US. Are you going to be speaking/attending any events in the US in 2018?

ROB: I will be speaking at the Four Seasons in Las Vegas from March 15th until the 18th for the Oxford Club. I’ll be back there again in September for the Total Wealth Symposium organized by Banyan Hill.

DENNIS: As a reminder, I have an account with Rob’s firm, however, we have no other financial arrangements. He graciously gives of his time. On behalf of our readers, thank you again.

Waiting (and waiting) for something to happen is difficult. With today’s computer traders, a Minsky Moment can be sudden. I agree with Rob, better to be patient than the last to exit the party!

Anyone who thinks inflation is 2%, and under control, had better check again.

Last week I bought tickets to watch the Cubs play the Cardinals in St. Louis. Nosebleed seats were just under $100/ticket. We also have tickets for some spring training games here in Arizona and they are over $50/ticket. It’s absurd! By the time you pay for parking and have a meal, a family of four can spend $200-300 to visit the ballpark – to watch them practice. The only people who really care about winning are the fans.

Last week I watched some tapes of the recent Barrett-Jackson auto auction. I was surprised at the number of autos that brought well over $100,000. I’m talking about Plymouth Barracudas, Olds 442’s and Chevy Chevelles, not just the Corvettes and other vehicles that were expensive, to begin with. Some vehicles went over $1 million.

I wonder how many of those buyers are using vintage autos as an inflation hedge?

We will close out the week with some cool car photos from friend Rob G. I’d love to own some of these cars today: