Want a new car? Hang on it will get interesting. 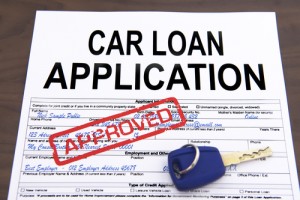 Seniors and savers regularly lament the Federal Reserve’s Zero Interest Rate Policy when it comes to paying interest on their savings. At current rates a saver who has amassed $100,000 earns enough interest to buy a burger for lunch every day at your nearest fast food joint – as long as you skip the fries.

While lenders are punished, borrowers love the Fed’s policy, particularly when it comes to automobiles. Low interest rates have caused auto sales to skyrocket in the last few years. 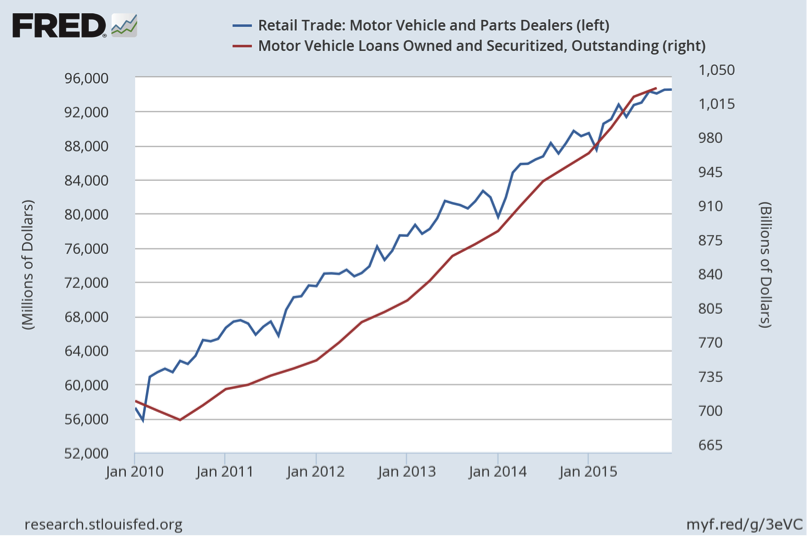 David Stockman peeks behind the curtain and tells us cracks are starting to appear.

“Yesterday’s WSJ article on rising auto loan delinquencies had a familiar ring. It focused on sub-prime borrowers who were missing payments within a few months of the vehicle purchase.

‘More than 8.4% of borrowers with weak credit scores who took out loans in the first quarter of 2014 had missed payments by November, according to the Moody’s analysis of Equifax credit-reporting data. That was the highest level since 2008, when early delinquencies for subprime borrowers rose above 9%.'”

Not only are there more loans being made to subprime buyers, they are also for longer terms. 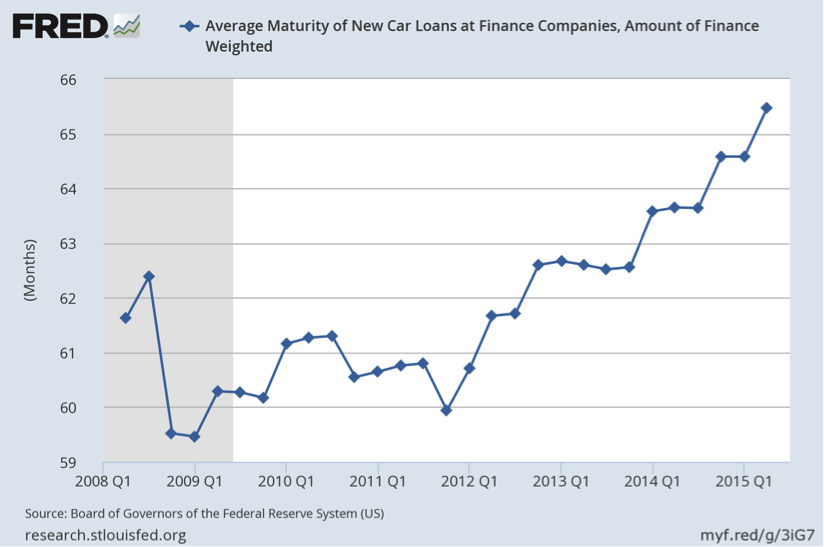 Apparently the auto sales boom has been 100% debt financed.

The online depreciation calculator estimates that in the first two years a new car will depreciate by 48%. Subprime buyers generally finance the vehicle cost, the required taxes, title and other associated cost of buying the vehicle.

The minute they drive the new car off the lot the Loan to Value Ratio could easily be in excess of 120%. Many will stay upside down on their car loan for several years.

Do we have a problem?

Not according to Melinda Zabritski, Experian’s Senior Director of Automotive Finance:

“The numbers are obviously worth keeping an eye on, but lenders are managing the risk. ….”We’re not seeing anything that would be a red flag.”

Will the low cost of money, coupled with the high interest rates be enough to cover cost of the loans that default? If you are looking for an encore career, the local repo man is probably hiring.

What about the dealers?

I agree with David Stockman when he predicts:

“During the next 5 years a veritable tsunami of used vehicles will come off lease and loan and flood the used car market, thereby reversing the virtuous cycle of debt fueled new car sales that may well have peaked last fall.

While lenders may not see a red flag – yet, it does not bode well for dealers. New car dealers will see a slump in auto sales and will try to keep the party going with even more incentives, longer and lower cost loans.

Will the government create “Fannie and Freddie’s Wheels” to buy up the toxic loans to keep things rolling?

How does this affect baby boomers and retirees?

If the default rates continue to escalate it will negatively affect the lenders. Anyone holding the debt, banks, Exchange Traded funds and other vehicles that have bought loan packages are vulnerable. If you are investing in any of these vehicles you are probably getting a decent yield. You may want to ride the wave and jump off when the clouds are dark. Keep your position limits reasonable and tighten up your trailing stops. Be careful, when the market turns, it will turn quickly.

With the glut of used cars, trade in values will also decline. Should you trade now because you will get a higher value than you may in the future? The online depreciation calculator estimates that in the first 3 years a vehicle will depreciate by 64%. From that point the rate of depreciation drops radically.

Boom times versus slow sales plays a major role in automobile pricing. Unless you believe the discount being offered today is much greater than what will be available when the auto industry is hurting, you will be better off waiting if you can. Keep your vehicle clean and in good shape. Older vehicles in good shape are always in demand.

With auto sales going off the chart, just how good a deal do you think you will really get today? You may get a great deal under current market conditions; however when the entire industry is facing a slowdown will a better deal be available?

When you are ready to strike, don’t get emotional, take your time and be a good shopper. The automobile business is very competitive. Allow the competitive market to work for you.

The next tip always causes controversy. Unless you have money to burn, never lease an automobile. I’ve heard all the arguments about convenience, lower monthly payments, deploying your capital elsewhere and not having to worry about something going wrong. That convenience comes with a steep price.

When you lease a vehicle you are going to pay for the same costs you would have paid if you owned it. Assume you lease a $25,000 vehicle for 3 years. Your lease cost will include the cost of borrowing money, depreciation and profit for the leasing company. The depreciation calculator estimates the three-year depreciation to be 64%, or $16,000. Now you turn your vehicle in and do it again for another three years. Over a 6-year period you have now paid $32,000 in depreciation, an average of $5,333.33 annually.

Those who advocate leasing are an auto dealer’s dream. They are buying automobiles and paying the bulk of the depreciation with each successive lease. The dealer then gets a 3-year old automobile and puts it on the lot for a nice markup.

After your home, an automobile is normally the second most expensive purchase people make in their lifetime. Savvy buyers can save a lot of money buying that clean car that just came off of lease at a much lower price and driving it for several years.

Last summer I toured the Toyota plant in Evansville, IN where our Sienna was built. Our guide suggested we trade it in before we reach 75,000 miles. We will get a better deal because the dealer can still offer it as a Certified Used Car.

I asked the owner of the dealership where I bought it what he thought. He said, “Dennis the average Sienna goes around 225,000 miles. You have gone through the high depreciation years, continue to drive and enjoy your vehicle and don’t worry about it.” You see why he gets 100% of my business.

Toxic auto loans and a glut of used cars are a result of the bad decisions of others and not your problem.

Don’t be in a big hurry to run out and get a new vehicle unless you absolutely have to. The old saying about the stock market also applies to buying autos – “The time to buy is when there is blood in the streets”. Right now it looks like storm clouds are forming – let the market come to you.

Next week we are having a SSR rally in Henderson, NV. 84 vehicles registered so it will be quite a sight to see. SSR stands for Super Sports Roadster – Roadster trucks that are hard top convertibles. Chevrolet made approximately 24,000 in total between 2002-2006 and then discontinued the line. The 2005 & 2006 model years have Corvette LS2 engines in them and are a blast to drive.

Here is a video taken at the first rally we attended in Kissimmee, FL. Jo and I are in our “Ricochet Silver” model at the 2:11 mark. Our truck has been customized a bit since the video was taken.

My favorite part is when we line up and “caravan” the local countryside. On Thursday night the schedule says, “We will leave for a “Topless” cruise down the World Famous Las Vegas Strip.” Of course that means we will have the top down on our trucks…. Jo likes to say it’s just “old boys and their toys”.

If you are in or around Las Vegas please say hello.

Immediately after the rally our family is coming for a visit. I think some of the funniest things come from the mouths of our children.

Grandma was talking with our 6-year old grandson, Brock.

“Brock, we are going to visit Grand Canyon, do you know what that is?” she asked.

He didn’t skip a beat. “Grandma I know all about it. It’s a big ditch between a couple of mountains!”

Whenever we ask if anyone has been to the Grand Canyon, they vividly remember that trip even when they were grade school children. Brock will see the biggest ditch he has ever seen in his life – and never forget it.