“We The People” Are Getting Screwed! 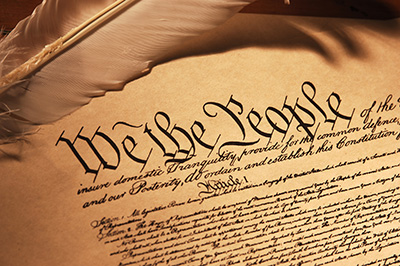 Enough is enough! It makes no difference what political party is at the helm, our government is foolishly wasting money and putting OUR country at risk.

While the preamble to our Constitution begins with, “We The People”, somehow the concept of elected representatives looking after OUR best interest got lost along the way.

“It is an organization that has only one real goal – to protect and promote the people who control it.

And as we’ve seen, illuminated by the great Italian economist Vilfredo Pareto, it is always controlled by a small segment of the society – the elite.

We’ve seen also that the ‘investments’ made on behalf of the public most often benefit only the elite.

…. Elections are supposed to ‘throw the bums out.’ But apart from a few headliner acts, the show remains little changed…with the same clowns, misallocating the same resources, over and over.”

While I have written about the need for Congress to reinstate the Glass-Steagall act; separating the casino investment houses from our banking system, another outrageous issue raised my blood pressure.

Wolf Richter’s article, Intel & TSMC on Chip Shortage: After Blowing $84 Billion on Share Buybacks since 2011 and Now Woefully Behind, Intel Clamors for $50 Billion in Subsidies for US Chip Industry, tells us:

“US semiconductor manufacturing has declined to where it is now only 12% of the world’s total, said Intel’s new CEO Pat Gelsinger in an interview with CBS on 60 Minutes. …. “It’s a problem…because relying on one region, especially one as unpredictable as Asia,” where 75% of the chips are made, is highly risky.”

And Intel, which made $63 billion in net income over the past three years combined, “has been lobbying the US government to help revive chip manufacturing at home – with incentives, subsidies, and-or tax breaks, the way the governments of Taiwan, Singapore, and Israel have done,” Gelsinger said. This lobbying came after Intel had incinerated $84.5 billion in share buybacks since 2011 (data via YCharts): 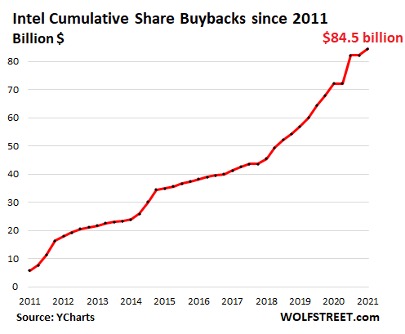 “If an auto assembly plant runs out of just one component that couldn’t be delivered because the component maker had run out of one type of semiconductor…the vehicle cannot be built, or cannot be finished and sold, and production halts. That’s essentially the problem that the entire auto industry is now facing.

Ford, when it announced earnings…shed more light on what the global semiconductor shortage…means in terms of lost vehicle production and lost dollars.

It included these whoppers:

The ripple effect for all manufacturing is mind-boggling. Don’t expect prices on consumer electronics to be coming down anytime soon….

Instinctively, I wanted to nail Intel management for their short-term thinking.

One of my former clients, Schlumberger, was a high-tech company. Top management mandated that 20% of their total revenue be invested back into the company each year for research; that’s a lot!

I asked one of their top executives, “why?” His response was simple:

“Dennis, if we relied on five-year-old technology, we would be out of business today. It’s simple – innovate or die! If a farmer consumes all his grain, he will have no seeds for next year’s crop.”

I suspected Intel’s loss of market share might have been caused by cutting corners on research, while using the money for dividends and stock buybacks. I was wrong.

Electronics Weekly tells us, “Intel Out-Spends Everyone On R&D”: 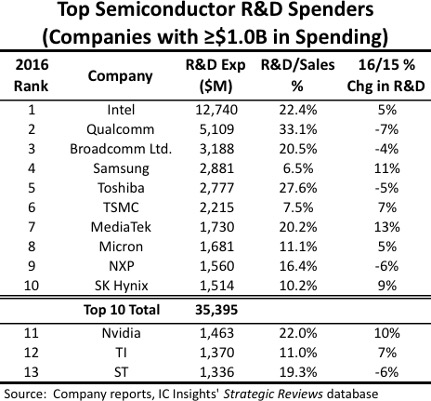 Intel has been profitable, doesn’t appear to be skimping on research, and their $84 billion in stock buybacks wasn’t done with borrowed money.

Yet today they are lobbing the government (meaning us, the taxpayers) for money and announced capital spending plans (approximately $25 billion) for plants in Arizona and Utah. As a taxpayer, I’d prefer they pay for their expansion efforts with their profits, not my money!

This issue affects us all

A few years ago Forbes reported, “The Ugly Truth Behind Stock Buybacks”:

“For most of the 20th century, stock buybacks were deemed illegal because they were thought to be a form of stock market manipulation.

But since 1982, when they were essentially legalized by the SEC (Emphasis mine), buybacks have become perhaps the most popular financial engineering tool in the C-Suite tool shed. And it’s obvious why Wall Street loves them: Buying back company stock can inflate a company’s share price and boost its earnings per share—metrics that often guide lucrative executive bonuses.

As Reuters wrote recently, “Stock buybacks enrich the bosses even when business sags.’ 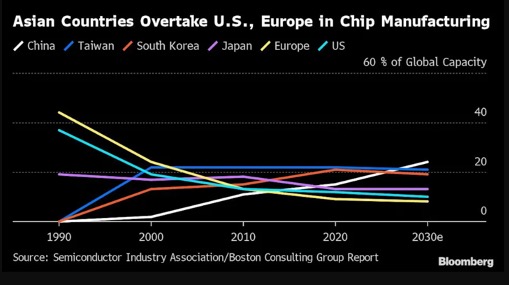 “(Bloomberg) — Intel Corp.’s new Chief Executive Officer Pat Gelsinger wants the company to regain its former glory as the world’s leading chip manufacturer and he says it’s a strategic priority for the U.S.

‘This is a national asset. This company needs to be healthy for the technology industry, for technology in America,’ Gelsinger told analysts late Thursday after pledging to keep most of Intel’s semiconductor production in-house. ‘It’s an opportunity to help and to unquestionably put Intel and the United States in the technology leadership position.’

…. Intel will struggle to live up to Gelsinger’s assertion that the company can catch and pass Taiwan Semiconductor Manufacturing Co., the current leader in chip production.

…. The chip industry is at the heart of a growing national rivalry between China and the U.S. China is the biggest consumer of semiconductors and the government there has vowed to spend more than $160 billion to create a domestic semiconductor sector. So far, though, it still relies heavily on U.S. chipmakers. …. While many U.S. companies still design advanced chips, they have them made by TSMC in Taiwan.

So, who on Wall Street is pressuring Intel for quick results, more cash flowing out of the country and outsourcing production to Taiwan? Wall Street Zen, tells us who owns and controls Intel: 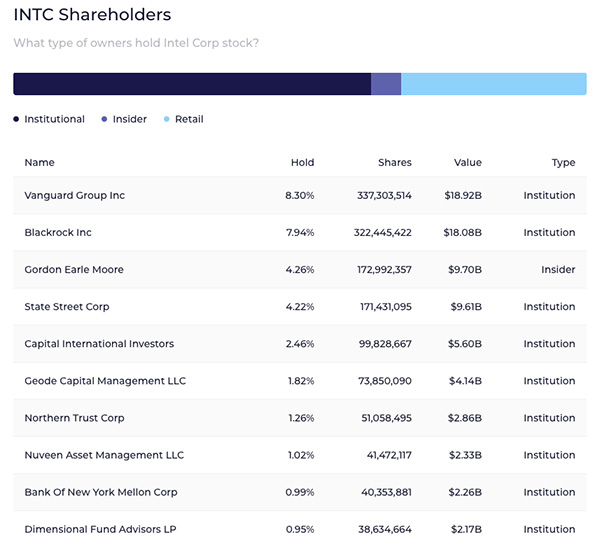 The top five banks, with their respective investment arms, control over half of the mutual funds in the country. They want to siphon as much corporate cash and profits into their coffers as possible. Allocating capital for building production facilities, which has long term benefits, reduces the cash available for dividends. Stock buybacks helps their mutual funds look good while they earn even more in fund fees.

GE was one of the worst buyback offenders; borrowing money to buy back stock, while ignoring their woefully underfunded pension plan. GE capitulated to “investors and analysts hankering for quick results”; with little regard for the long-term damage it may cause.

The Wall Street investment houses, with their affiliates, wield unfathomable power over corporate America. Is the new Intel boss, or any major corporate head, willing to risk their job and stand up to the Wall Street gang of thieves, while doing what is right for the company and country in the long term? Will they be able to turn down huge personal incentive plans, designed to enrich the Wall Street elite?

The SEC, not a law passed by Congress, allowed for stock buybacks. “We The People” are getting screwed!

It’s time to demand that Congress immediately outlaw corporate stock buybacks. Wall Street, government financial regulators and top corporate executives have shown they are not worthy of our trust. 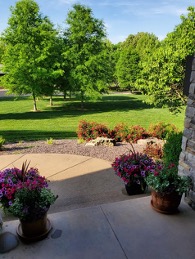 As I am putting the finishing touches on this week’s letter, I am looking out the window at freshly mowed grass in Indiana. There is a soothing breeze; just a beautiful day as we move into summer. It’s cool watching your two youngest grandsons driving riding mowers over a couple acres of land and doing a good job.

Yesterday, at lunch, my wife Jo remarked how beautiful and green everything is in this part of the world.

This year’s farm crop is popping out of the ground, hoping for appropriate rain and a good, profitable season for local farmers.

While I love the Arizona spring vegetation, in the valley it is still desert. We don’t worry about mowing the gravel in our yard.

To sum it up, I told Jo it is indeed beautiful here; too bad they have cold winters. We are lucky to be able to enjoy the best of both worlds.

Quote Of The Day… 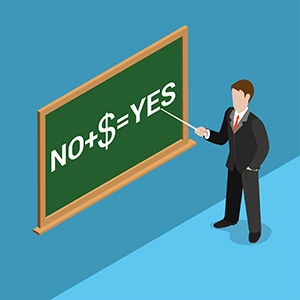 Corporate America and much of the government are paid handsomely to look after the elites on Wall Street at the expense of “We The People”.

“It is difficult to get a man to understand something, when his salary depends on his not understanding it.”

Some history behind common slang terms for your enjoyment:

HOT OFF THE PRESS – As the paper goes through the rotary printing press friction causes it to heat up. If you grab the paper right off the press, it’s hot. The expression means to get immediate information.

BARGE IN – Heavy freight was moved along the Mississippi in large barges pushed by steamboats. These were hard to control and would sometimes swing into piers or other boats. People would say they “barged in”.

RIFF RAFF – The Mississippi River was the main way of traveling from north to south. Riverboats carried passengers and freight, but they were expensive, so most people used rafts. Everything had the right of way over rafts which were considered cheap. The steering oar on the rafts was called a “riff” and this transposed into riff-raft, meaning low class.

Reader Steve N. shares one near and dear to my heart:

FAIR TO MIDDLING – My grandmother lived much of her life in the south. If someone asked, “How are you?” she would generally reply, “Fair to Middling”.

“If you look at a comprehensive commodity price chart cotton grades are as follows:

So, “fair to middling” means you are feeling less than average or middling.”