What Does an Expensive Wedding Really Cost You? 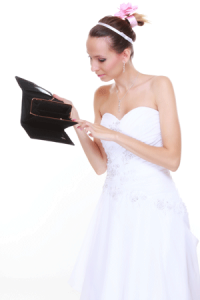 “Are you kidding me?” I was dumbfounded. I was on the Lending Club website. Someone with a poor credit score wanted to borrow a lot of money (enough for a good down payment on a house) for “wedding expenses”. The payments were in excess of 15% of their monthly income. I’ll pass on that one.

When I told my wife Jo she grinned and pointed at the television. She was watching, “Say Yes to the Dress”. I stood in disbelief watching young women try on $10,000 dresses.

It’s been several years since our four children left the nest. Am I that out of touch with today’s world?

While the cost of a dress seemed more sensible, I was surprised to see the average cost of the wedding and the average marrying age.

We have spent many hours discussing the trade off between the euphoria of a child’s wedding, with the reality of the cost – and things we would “do over differently”. Following are some real world tips from the “been there, done that” generation.

When the bride, groom, and both sets of parents submit a list of names for the guest list the negotiations begin. Unless you are a billionaire, the size of the list becomes cost prohibitive. How many people will your budget allow? Negotiate the allocation with both sets of parents and the bride and groom. Then let them cull their respective portion.

A wedding symbolizes the children starting their life together; breaking away from mom and dad. At the end of the weekend they will be married, and much of the stuff you fretted about will be forgotten.

Mom, if you find yourself arguing with your daughter about the typestyle of the invitation, you are making things emotionally difficult. Offer your suggestions and then let her choose. It’s her wedding!

Parents, you do not have to budget the same amount of money for each child. Your financial circumstances may have changed. Do what you can and feel comfortable with. Don’t jeopardize your retirement because you feel guilty saying “no”. Your children will love you for doing what you can.

We know a young woman who was part of the bridal party for a college classmate. A few years later she was getting married and asked the bride to reciprocate. The bride had two young children and financially could not afford it, and declined. She told us “I told her my financial concerns and she refused to speak to me ever again.” What a shame!

Sure, the bride to be can feel, “it’s not fair”, but that will not change a thing. Unless you want to lose some good friends, make it okay if they cannot be part of your celebration.

In many families, a wedding is considered a big social event. Bride and groom don’t want to hurt anyone’s feelings by embarrassing their parents by saying they just preferred a small wedding. Speak up and be honest before the money is spent.

It is possible to have a large wedding at a reasonable cost. My niece had a beautiful wedding and the reception was in her back yard, under a huge tent. It was catered, they had a large crowd, a local disc jockey and it was lovely.

You establish the budget and go from there. Now, they are no longer spending mom and dad’s money, they are spending their money. You will soon hear things like, “Dad we figured out how to save $1,000 on the wedding photographer.” They decide what is really important and make the compromises. Whether it is Tommy or Tammy, the process works just as well. While they may come to you and ask your opinion, when they tell you the cost the answer is always the same, “can you afford it?”

If the children prefer a smaller, less expensive wedding and want to use some of the money for something much more practical, be proud of them. You can still brag about them to your friends.

I am not opposed to borrowing money if you can afford it; however, do you really want to borrow money to spend on a big party? Unless a family has plenty of money, (in that case they should not have to borrow) I suggest that parents discuss the practical side with the children.

Is it better to have a less expensive wedding, and the difference be put toward a down payment on a home or paying off student loans? Is the cost of a wedding going to affect your retirement plans? When grandchildren arrive, are you going to want to help start a college fund?

As a parent, one of the proudest moments is seeing your children grow into independent, responsible adults and parents. Unfortunately, many have huge student load debt coupled with maxed out credit cards. They are facing a much different world than we did when we were young.

Family elders joke about how they started out broke. We had no huge student loan debt, and Visa and Master Card did not exist. Broke meant starting at zero, not a negative net worth. Many young people today have huge debts that must be paid off just to get to the point where they can begin saving for a down payment on a home. Things are different today.

A wedding ceremony symbolizes the beginning of the next generation and should be celebrated. There comes a time where good, old-fashioned common sense, coupled with reasonable compromises must prevail. It is a blend of tradition and reality. Make the tough choices, have a great wedding within your budget and parents and children alike should look forward to their next phase of life.

The regular baseball season has ended and the playoffs are getting started. Pittsburgh won 98 games and the Cubs 97; the second and third best records in Major League Baseball. The Cubs could have lost 12 more games and still made the playoffs.

I submit this to production before the Cubs-Pirates game is played on Wednesday night. The winner goes on to play the Cardinals and the loser is done for the year. Their fans will either be euphoric or horribly disappointed. It’s a shame that one of the top teams is eliminated before the playoffs really get going.

I continue to remind myself if the biggest concern I have is a score for my favorite team, life must be pretty good.

Next week my Daughter Dawn arrives with husband Gary and grandson Justin. We will celebrate his 30th birthday. Seems like their wedding was yesterday, time sure flies.

Good friend Alex N. sent me a cute saying which seems appropriate when talking about weddings.

“I don’t spoil my grandchildren, I am just very accommodating”