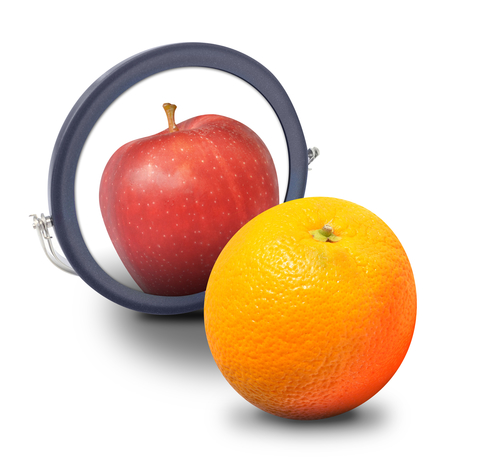 The cost of renting money is going up. One pundit commented mortgage rates are approaching 6% – “things are getting back to normal.”

In mid-July, CNET reported: (Emphasis mine)

“Mortgage rates have been rather consistently going up since the start of this year, and are expected to climb throughout 2022.

…. At the moment, inflation and the federal funds rate are particularly influential.

The Federal Reserve has increased interest rates three times this year and has signaled its intention to hike rates again to try to contain inflation. That will likely translate into higher mortgage rates and, for prospective borrowers, steeper monthly mortgage payments.

Wolf Richter explains what is going on:

“QE creates money. QT does the opposite: it destroys money.

With QE,(quantitative easing) the Fed creates money (and) pumps it into the financial markets…this money is used to purchase assets, and as this money chases assets, it inflates asset prices of all kinds,…drives down long-term interest rates, including mortgage rates, which further inflates home prices, etc. ….

With QT,(quantitative tightening) the Fed does the opposite. QT reverses QE. QT (has the) opposite effect on yields and asset prices, and home prices, etc., driving up long-term interest rates and deflating asset prices.

The Fed is now tightening its policies – raising rates…because inflation has exploded to a 40-year high.

The Fed’s assets from crisis to crisis – money-printing comes home to roost: 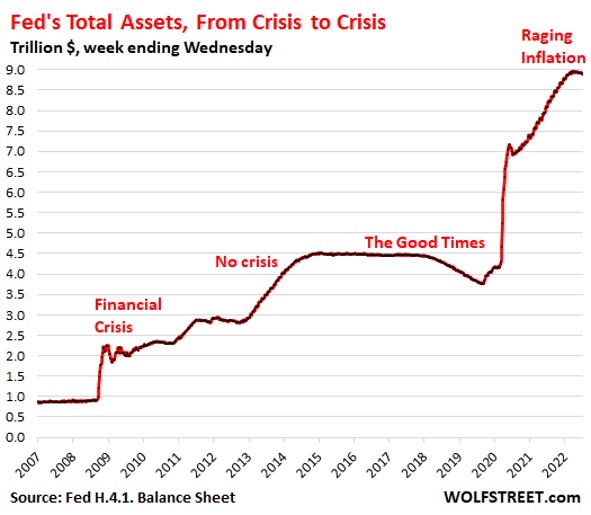 Inflation is entirely a political phenomenon, caused by government action. In 2008 the government bailed out banks that made bad investment decisions. Over the next 14 years they poured trillions into the system, creating double digit inflation.

To clean up this raging mess, the Fed has gone to QT. Money is no longer free. Borrowing costs should continue to rise. Corporations and governments are seeing their low interest debt mature. Many will roll over their debt and see a significant increase in interest expense.

“Conforming to a standard; usual, typical, or expected.”

If mortgage rates are 6%, that might be considered normal over the last 20 years. Over the last 50 years, 6% looks like a pretty good deal.

Lenders should also be earning more money. Interest is the rent the borrower pays for using other people’s money. Schwab provides the current rates:

The fly in the ointment is inflation. John Williams at www.shadowstats.com provides the data. 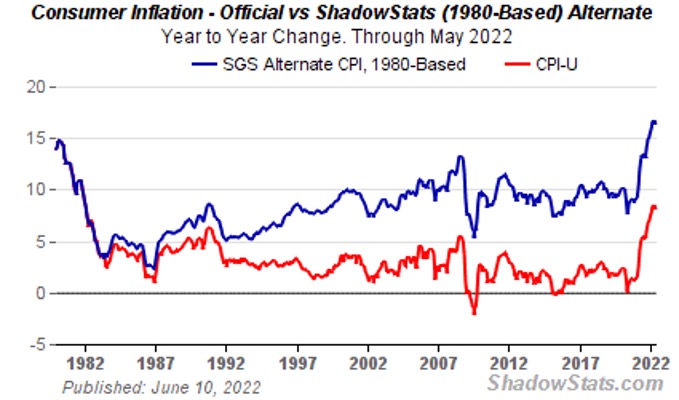 John calculates inflation as it was in 1980 during the Carter years. Since then, the Bureau of Labor Statistics (BLS) has gerrymandered the number for political purposes.

In June, the Fed announced inflation hit a 41-year high of 9.1%. The Fed says they are going to continue to raise rates. BLS

“The U.S. CPI report got “leaked” yesterday ahead of its print today, and the “leaked” report said that inflation had gone to 10.2%! That was quickly exposed as “fake”, and everyone calmed down. My spider sense is tingling here folks… this is all too suspicious, don’t you think? My take on this “fake” report, was that this was the initial actual BLS CPI report, before they applied their hedonic adjustments!”

I agree with Chuck, BLS data is always suspicious. Inflation over 10% has real political implications. 10.2% or 9.1% – Americans know inflation is robbing their buying power big time.

There is nothing normal about the current market or 6% mortgage rates.

During the high inflation Carter years, mortgage rates topped out around 17.5%. In addition, the banks demanded huge origination fees to grant a loan. Why? The banks knew borrowers would refinance when interest rates declined. They gouged customers because they could. The economy went into a recession.

Borrowers paid, and lenders received, an interest rate higher than the inflation rate.

We are not even close to that. While the Fed is talking tough, we are a long way from getting the markets back to “normal”. We will be lucky if we have a recession, not a depression, in the process.

“Higher rates eventually enforce a sort of discipline on the drunken party in government and even in the private sector. That would be a good thing.

Yield solves all demand problems for debt. Who would want to hold Treasury securities, given this debt and inflation? But here is the thing: If people don’t want to buy 10-year Treasuries at a yield of 3% when inflation is 8%, then yield will have to rise until sellers find a buyer, and at higher yields, the buyers emerge. At some point, a 10-year Treasury paying x% in yield is going to be a great deal, and demand always emerges after some price discovery.

Higher interest rates enforce discipline. Eventually, higher interest rates combined with ballooning debt levels will push interest expense up to a point where it’s taking more and more of the growing budget…. Congress will have some debates about it, and after some grandstanding and tongue-wagging and taking in the maximum amount of lobbying money, there might even be a compromise on spending and taxes because the only discipline in a capitalist system is the cost of capital.

And if the cost of capital is zero, or is below zero in real terms, and for long enough, then there is no discipline, and the drunken party just keeps going on….

Higher interest rates will enforce a sort of discipline on the drunken party, including in the private sector, and will sober up the participants, and prevent the kind of long-lasting destruction that massive inflation wreaks on the economy, and that would be a good thing.”

The party is a long way from over despite what the government says….

World Central Banks joined the drunken spending party in unison. Normally if one currency is experiencing inflation, investors flee into another currency to protect their buying power. By coordinating their efforts, they were able to maintain parity among major currencies worldwide, while creating trillions in fake money.

Urs Vrijhof-Drose, at WHVP explains in his newsletter (FREE I recommend all readers sign up to get a global perspective) that Central banks ignored the seriousness of rising inflation and waited much too long to react. He provides a chart showing government interest rates compared to inflation is a global problem: 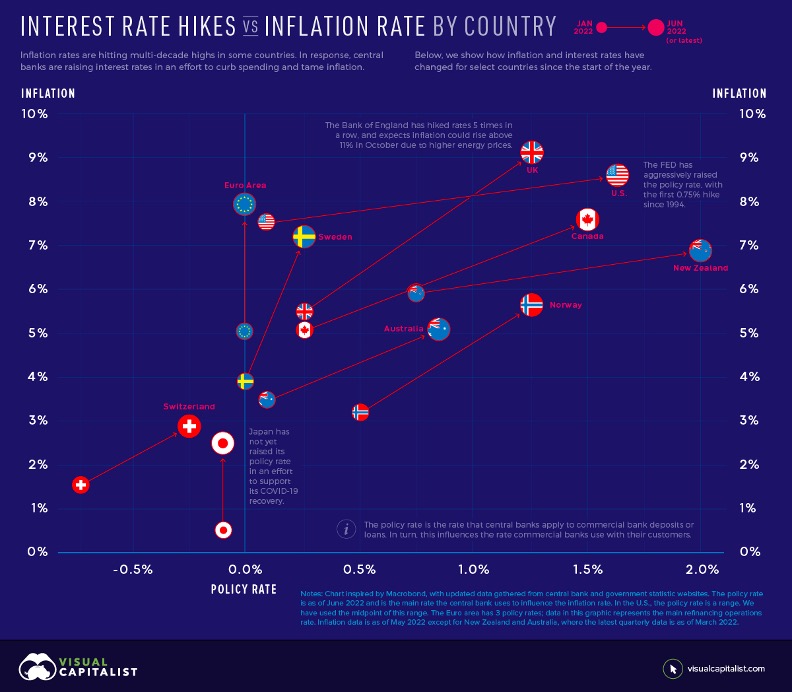 “Central banks fully understand that the long-term benefits (of fighting inflation) far outweigh any short-term costs. And that credibility is too precious an asset to be put at risk.”

Central Banks? I doubt the political class has the willpower to do what it takes to return to normal.

What has to happen?

“Now we have a recession on Main Street as well as a bear market on Wall Street. What we don’t have, yet is any sign of panic from the Fed. It’s committed – for now – to tightening up the money supply to combat inflation.

But we’re just at the beginning. Mr. Market is correcting the Fed’s mistakes and deflating the economy. And he’s got a long way to go.

Then, we’ll see what kind of stuff the Fed is made of. It will face the ‘Decision of the Century’ – either continue to let Mr. Market do his work, cleaning up more than 20 years of irresponsible monetary policies…or go back to printing money and letting inflation rip.”

Mr. Market is a fictitious character created by Benjamin Graham in his book, The Intelligent Investor. He is a hypothetical investor, driven by panic, euphoria, and invests as a reaction to his mood, rather than logically.

Eventually, as irrational as it may seem, a free market pricing and true price discovery is achieved.

For things to return to “normal” Mr. Market needs to make his decisions without being influenced by government and central banks trying to gerrymander the economy – and his decisions to meet their political needs.

Interest rates, for both lenders and borrowers, must be higher than the inflation rate.

Prosperity for society can be achieved through positive interest rates as determined by Mr. Market. A free market functions best without government intervention.

Will the Fed and central banks continue the inflation fight despite the short-term costs? It will be tough. Will they quit their manipulation of the free market? Many Americans want the government to back off and leave them alone.

If they don’t, we risk another great depression, and perhaps political and social breakdown.

We made it! We are in Indiana for a month. Been spending some quality time with family and friends. With our new abode, we are busy continuing to feather the nest.

It’s funny, as the temperature has been in the 90’s, cooling down to the low 70’s at night. Locals are complaining about the heat. When we talk to our AZ friends, the temperatures are in triple digits, and they are lucky if it gets to the mid 80’s at night. While they say it is a dry heat, don’t buy it, it’s still damn hot. Add some humidity and it would be even worse. During AZ summers it seems like the AC never shuts off.

Major league baseball is rapidly approaching the trade deadline, the annual auction of good players to teams who want to take a shot at winning it all. It can be exciting, but also frustrating for those teams and fans parting with good players. I suspect my beloved Cubs will be awful in the last half of the year.

I’m likely to take a week or two off. Writing is going to take a back seat to enjoying time with the family.

NO MATTER WHAT YOUR AGE….

“You’ve got this life and while you’ve got it, you’d better kiss like you only have one moment, try to hold someone’s hand like you will never get another chance to, look into people’s eyes like they’re the last you’ll ever see, watch someone sleeping like there’s no time left, jump if you feel like jumping, run if you feel like running, play music in your head when there is none, and eat cake like it’s the only one left in the world!” — C. Joy Bell