What’s Going To Happen To The Value Of The Dollar? 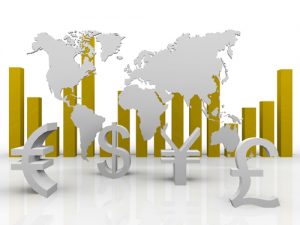 President Trump wants to increase exports and says the dollar has to come down. Janet Yellen and the Fed are hell-bent on raising interest rates, which should increase the value of the dollar. Historically the economy slows down when rates begin to climb yet the stock market is soaring.

High inflation affects all of us and generally signals a weakening of the currency. Kiplinger forecasts, “Core inflation, which excludes food and energy, will end 2017 at a 2.4% annual rate.”

For those who don’t eat or drive, that doesn’t sound too bad. They also predict, “Overall prices of groceries will be nearly flat next year but the cost of dining out will rise.”.

When you fill your tank on the way to your favorite restaurant, you’ll likely agree with Shadowstats. If inflation were calculated in the same manner it was in 1990 the published rate would be around 6%.

Rob has a worldwide perspective on investing. When they place a trade for their clients, they search for good investments, and then decide the best currency to use holding the investment. Most US investors never think about this; your broker normally has all your investments in US dollars.

He agreed to give us some of his time for an interview.

DENNIS: Rob, on behalf of our readers, thank you for your time today.

I want to start by asking about the dollar and inflation. To me inflation is the value of one currency in relationship to others. When the US government bailed out the banks and created trillions out of thin air, many felt the value of the dollar would go down. It appears the rest of the world was devaluing their respective currencies at an even faster rate because the dollar increased. From a global perspective, what do you see happening with the dollar in 2017?

ROB: Thank you for inviting me.

Indeed, a very interesting question. It does seem that national banks worldwide are doing everything possible to devalue their respective currency, be that in Euroland, China, Japan or even Switzerland. Because of this we are, and have been, seeing a flight to safety into the world’s reserve currency: the US Dollar.

As expected, the Federal Reserve has started hiking interest rates and signaled they want to raise rates three times in 2017, however that is always subject to change. What was not expected is this hike put pressure on the US Dollar against all major currencies. The big winner being the Australian Dollar, closely followed by the Swiss Franc which is yet again trading below parity against the US dollar.

We are slowly seeing inflation coming back. We are also convinced that the current administration is not in favor of a strong US Dollar. You mentioned Russia, China and the Saudis are selling off some of their dollar denominated debt. Selling when the dollar is high works to their advantage.

Looking into the future we very strongly believe that we will be seeing a retracement of the currently overvalued US Dollar and believe this is a window of opportunity to diversify into foreign currencies.

DENNIS: Last year we had Brexit. Other countries are also discussing leaving the European Union. No one really thought the British could pull it off, but they did. Do you see other countries leaving the EU? If so, what effect could it have on your US clients?

ROB: The year 2016 brought a few surprises, not only the Brexit but also the US Presidential election of Donald Trump.

The Netherland’s cast their votes and Mark Rutte’s VVD will be able to form a coalition Government. As far as we can tell this will exclude Geert Wilder’s populist party, which will therefore, stay in the opposition.

This is good news for Europe and the Euro. The elephant in the room will of course be France. We will have to wait for the outcome of the French election before we really know what the future of Europe will look like.

After the vote in the Netherland’s, we are a bit more optimistic that the EU and the Euro will still be alive after 2017. We might even see the Euro strengthening versus the US Dollar in the not too distant future.

Gold was sitting at the important resistance of $1,200 for several days but turned in a strong performance. It’s now trading above $1,220, which is a very good sign. Should this level hold, the next big resistance will be coming in at $1,250.

If the populist parties win, there will be great uncertainty. It would not be unusual to see a “flight to safety”; meaning money flowing into precious metals and the dollar until things settle back down.

DENNIS: So far worldwide inflation (with a few exceptions) has been kept moderate because the major countries were devaluing, almost in tandem, and maintained some parity among the major currencies. The Japanese seem hell-bent on devaluing ahead of the crowd, which has not helped their economy that much. What do you see in 2017, will any major currency break out of the pattern, either increasing or decreasing in value?

ROB: This may come as a surprise to your readership but beware; inflation is slowly but steadily on the way up in many western countries.

The European Central Banker, Mario Draghi, has been doing everything he can to get inflation back and it seems that he is finally getting there. Germany`s inflation has been on the rise. The same is true for Switzerland, as well as the USA.

The ugly D-Word (deflation) is finally disappearing. Having said that, we will have to watch the beginning stages of this inflationary period very, very carefully.

DENNIS: Rob, if you were to pick one currency to own in 2017, what would it be and why?

ROB: Since we do expect a further retracement to the upside in commodities, we are currently having a very close look at the Australian Dollar, which started to retrace some of the losses we had been seeing accumulating during the past 2 years against the US Dollar.

We also strongly feel that because of the insecurities worldwide, be that political or economic, the Swiss Franc will be used as a safe haven currency.

While most Americans generally have their US accounts in dollars, we believe a diversified currency base provides an additional layer of safety.

DENNIS: One final question. While I know you have clients worldwide, many are in the US. If you had one piece of advice for our readers, who are very concerned about their ability to retire comfortably, what would that be?

ROB: As already mentioned during this interview we see a window of opportunity arising for American clients. The current strength of the US Dollar will not last and it does in our eyes make sense to have part of your total wealth invested in other currencies, as well as stock markets and/or bond markets outside your home market the USA.

DENNIS: Thank you so much for your time.

Today’s interview is a great example. While President Trump and Janet Yellen are at odds over the best economic approach for our country; Rob points out that elections in Europe and the actions of the Russians, Saudis and Chinese may be the major factor in determining the value of our dollar. That will have a major effect on our exports, economy and our stock market.

Here is a LINK to Rob’s website. They offer a FREE report, “The Swiss View” which I highly recommend. Their perspective is much different from the reports we find in our inbox regularly.

Rob has reinforced my belief that the political climate around the world influences our investments dramatically. Stay tuned!

I was happy that the Northwestern Wildcat basketball team made the NCAA tournament for the first time in school history. They won the first game and then lost to Gonzaga, the #1 seed. Both were close and exciting games. What a thrill it must be for those kids to be playing on a national stage.

Legendary Rock and Roll singer Chuck Berry died last weekend. He was 90. He and Elvis were considered the father of Rock & Roll. When we were at a high school dance and Johnny B. Goode came blaring over the speakers we would leap to our feet and dance like crazy. How wonderful it was to have such youthful energy dancing and twirling our partner on the floor of the gymnasium. A half century later, our generation still instantly recognizes his guitar sound. Another reminder that time marches on…

Good friend Toots shares some clever ideas with us this week: