What’s the Value of a College Degree? 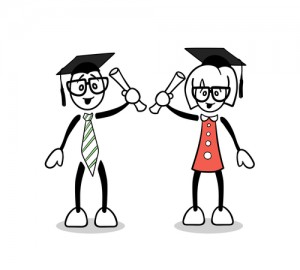 At 36 I was a vice president of a small consulting firm.  I learned I’d been enrolled in a weeklong, “executive sensitivity training” class.  I vehemently complained to my boss.  He said it was mandatory and I could thank him when I returned.  Damn!  The last thing I needed was to waste a week in some touchy-feely training class.

It didn’t help when the instructor turned out to be a high-powered hippie academic.  Young ex-marines have strong biases.

I stayed quiet as long as I could after all 20 of us went through our obligatory introductions.  By then I was seething.  We were all about the same age; disoriented and not knowing what to expect.  Mr. Hippie started by asking a series of questions.  If you didn’t speak up, the group demanded you get involved.

As the week progressed, the discussions became personal and emotional.  My first surprise was how well the group came together – all trying to help each other.

My life changed on Wednesday after lunch.  They looked at me and said, “OK Miller, what’s your story?”

I unloaded a lot of pent up emotion.  I discussed my childhood.  My father stole all the money in the house and left when I was three months old.  I bet I’m the only person you know that had his baby carriage repossessed.  Our family was nothing like the families you saw on the TV sitcoms.  I ranted for 20 minutes about a unique and rocky childhood.  I stopped to catch my breath.

A group member (not Mr. Hippie) asked me a question, “How old are you?”  I said, “36”.  He continued, “When did you leave home?”  I said, “Barely eighteen, ten days out of high school, I was on a train to Parris Island.”  He looked me square in the eye and said, “Who are you blaming the last 18 years on?”  I was stunned!  Dead silence!

I will skip the description of the emotional pain that followed and conclude with the life lesson learned.  I am responsible for my own behavior.  At 36 I had a choice to make, do I continue through life complaining about the past, or proactively focus on things I can control – my future?  I chose the latter and never looked back.

Déjà vu all over again

Brookings Institute released a study concluding, “A College Degree is Worth Less if you are Raised Poor”.  They set a bar at 185% above the federal poverty level, the eligibility threshold for federal assisted lunch programs.  They tracked earnings for people between ages 25 and 62 with both high school and college diplomas. 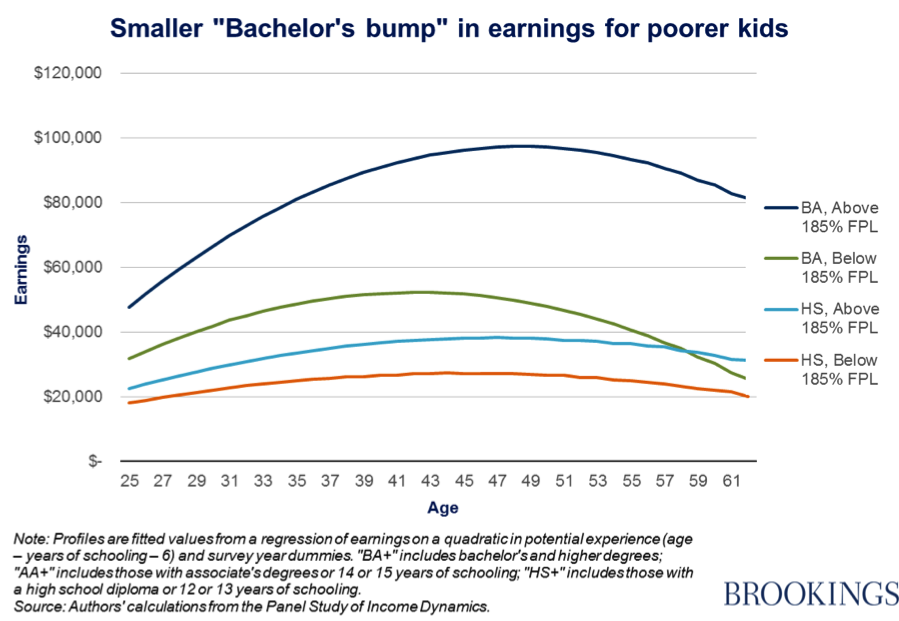 They came to two conclusions.  College graduates in both groups earned more than their respective counterparts without a degree; however there was a gap between the children of the rich and poor:

“As the chart shows, this earnings gap between poor and non-poor college graduates also widens as time passes. Bachelor’s degree holders from low-income backgrounds start their careers earning about two-thirds as much as those from higher-income backgrounds, but this ratio declines to one-half by mid-career.”

They plan to do more research to determine what is behind what they call “this rather startling gap”.  The survey is followed with 17 pages of reader responses, speculating on the potential causes.

I want to deal with one comment that raised my blood pressure and then get into things most respondents overlooked.

Respondent “dentedpat” chimes in with the following:

“I am a professor at a private school that focuses on recruiting first generation and poor students. I used to teach at an Ivy (as an instructor not a professor)…. You are correct about the networking point, but pretty much everything after that I disagree with.

With regards to parents advising their kids about majors and careers, this is almost useless whether the parents are rich or poor.  The reason is that most parents have been out of college and out of the entry level job market for too long to know anything about what to major in or what majors lead to higher levels of employment…. Parents are an obstacle to effective academic advising and career planning, and this is true, in my experience, whether the students are rich or poor.”

Mr. Dentedpat, my experience is different.  I taught in industry for over 40 of the top 500 US Corporations.  Career academics generally have little clue about the business world; they just think they are experts.  Many clients had close associations with schools and the department chairperson in the fields they were recruiting.  Their biggest challenge was to get the academics to quit sending the student with the best grades touting them as the most qualified.  Academic success does not always correlate with success in the real world.

Mom and dad know their children better than anyone.  Work with the school counselor to understand what the majors are and what is taught.  Never abdicate your child’s future to any career academic.  When do-overs happen, they are expensive.  Work together and get it right the first time.

1.  Does the study really indicate society has a problem?  I spent part of my childhood in the inner city of Chicago.  We would regularly have immigrant children come into class who just came to the US.  Many did not speak the language.  By the second and third generation many had advanced education, nice homes and had done very well enjoying “The American Dream”.

Each generation stands on the shoulders of the generation before them.  Those college-educated children coming from poor families have taken a giant leap forward.  They are in a much better position to influence core values, a work ethic, set expectations, and educate their children so they can continue to move up the economic and social scale.  Where is the rule that says it has to take place in one generation?

2.  After five years your college degree doesn’t matter, it’s people skills that make the difference.  Technicians like engineers, doctors, and accountants may do very well; however if their income is based on personal production, their earning potential is limited.  Technical skills go only so far.

One of my clients was a medium sized CPA firm.  Their highest paid CPA was named Art.  Art brought in so much business that most of his work had to be delegated to others within the firm.  Much of the business Art brought in was from good referrals.

The other CPA’s would say, “But he is such a lousy accountant!”   They felt it was unfair because they were technically superior to Art.  Ask the ownership, who was the one CPA they could not afford to lose, Art wins every time.  Art was a revenue generator, which required good people skills, who kept the others employed.

Managers make the money.  To succeed in the business world you must exhibit sound decision-making and the ability to work with others to accomplish their goals.

The top paid technical graduates are those who move up the management ladder.  Graduates with a technical major, coupled with a minor, enhancing people skills are better prepared for the real world.

Networking helps, but keep it in perspective.  Many of the respondents lamented that the rich kids parents were better networked and they got all the good jobs.  Don’t fall for the “It’s not what you know, but who you know!”, trap.  Once you get your opportunity, it’s just that; an opportunity to show people what you can do.  You still have to get the job done!  Make the best out of whatever opportunities you have available.

Many of my clients were high-powered major corporations looking for the best and brightest.  My entry-level training classes were full of terrific young people.  To move up the ladder you have stiff competition, you have to be the best of the best.  Many highly qualified young people would spend 5 years in that environment calling it “advanced education”.  When they left the company, they were generally in high demand.

Life and business is competition, more than just participation is required to get ahead.  Work hard and produce profits for your company and you will be rewarded.

Working your way through college is a good thing.  Many respondents complained about working and not having time for fraternities, sororities and networking.  Many recruiters prefer a candidate who worked, graduated with student loans, and still had time for some school activities.  They already have a work ethic and are motivated to do well.  If you worked your way through college, make it a positive when you go for an interview, you earned it!

Don’t dwell on your upbringing.  As I learned at age 36, I have no control over my past.  What I can control is my future.  Don’t blame others for your failures.  If you stumble, pick yourself up, brush yourself off, learn from your experience and deal with the task at hand.

What makes the college degree valuable is not the sheepskin; but rather how well the graduate performs given the opportunity the degree may provide.

It’s time for me to fess up.  Not only did I thank my boss for demanding I go to the class, I also thanked Mr. Hippie and gave him a hug.  My life was better because of the experience.  Since that day my mantra has been, “We are responsible for our own behavior, success and failures”.  Embrace the challenge; that is what life is all about!

Happy St. Patrick’s Day!  This commercial rivals my favorites, those of the Budweiser Clydesdales.  Not only is it funny and clever, you are kept in suspense until the very end.  Take a minute and enjoy it.  I predict you will forward it to some of your Irish friends.

We are in Las Vegas for an SSR rally.  Tonight 84 trucks are going “Topless down Las Vegas Blvd.”   We will have some real competition from all the trucks going up and down the strip advertising topless and more.  If they are trying to promote Las Vegas as a family destination, they sure are going about it the wrong way.

Personally I felt their theme, “What goes on in Las Vegas, stays in Las Vegas” would hurt their convention business.  I doubt their marketing people considered how the stay at home spouse felt about that idea.

Jo gave me a book about crazy @#%# old people say.  George Burns supplies us with some clever lines: