When Does Inevitable Become Imminent? 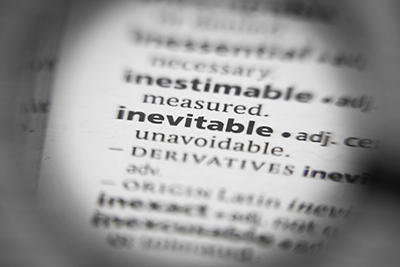 Who has consistently been wrong? The Austrian gold bugs always predict doom. They will be right eventually. If you wait long enough, eventually, gold will come back into favor.”

Since I began my encore writing career over a decade ago, I’ve warned people that eventually the Fed printing trillions in fake money, combined with reckless government spending will inevitably have serious consequences. Dillian’s “always predict doom”, got to me.

When does inevitable become imminent?

My concern hasn’t changed. I hope I am wrong. Time to revisit perspective; hoping readers will understand things through my eyes and filters.

I am not an economist, Austrian gold bug, a licensed money manager, or a true historian. I’m an 81-year-old who worked 60+ hours a week, traveling around the world for the last 37 years of my working career. I managed money for my father, mother-in-law, and my company’s pension fund. I had wonderful mentors, learned a lot through trial and error; my mistakes and those of others.

Exhausted, in 2005 I retired, happy to get off the road. Our IRAs were well funded; My wife Jo and I felt we were set for life. Everything worked until the Fed clobbered us in 2008. Our safe, guaranteed income was taken away. I said, “It doesn’t make any difference how we made our money; we are all money managers now.” Baby Boomers were afraid their life savings wouldn’t last.

Those with guaranteed government pensions seemed oblivious to what the rest of us faced – historic low interest rates, a sky-high stock market and a sluggish economy. We must find new ways to generate predictable income – with minimum risk.

I was asked to join Casey Research, writing a newsletter for Baby Boomers. They said not to worry about the technical side, they had plenty of excellent technical experts to help. What a great learning experience.

The first three years of my retirement was spent playing, traveling, and just having fun. Today it is reading, researching, talking with experts; trying to formulate a sensible approach toward surviving in today’s world.

I felt guilty when I read what Jared said about being right – eventually – particularly when it comes to gold and inflation. I try to combine research, experience, logic while blending in common sense in forming my opinion.

Gold pundits will eventually be right. Fiat currencies always collapse. Inevitability is not in question. Where is imminent?

John Maynard Keynes warned, “The market can stay irrational longer than you can stay solvent.” Remember Michael Burry from the movie, “The Big Short?” He saw what was inevitable, however, had the market stayed irrational much longer he too would have become insolvent.

Here is what I see & feel

Recently I was asked about how high gold could go, $5,000/oz? Maybe $15,000/oz? I don’t know how high gold will rise when the market panics, inflation is in full swing, and people rush in bidding up the price.

I never want to see $15,000 gold in my lifetime. Should it go to $5,000, I hope it does so at a reasonable pace. It scares me to think what will happen to our society if gold prices skyrockets.

“Money responds to the law of supply and demand just as everything else does. When the supply of dollars goes up, the value of each individual dollar goes down, and prices rise to compensate.

It took 172 years for the US money supply to hit a quarter billion dollars. That was 1959.

In 17 years, the Federal Reserve pumped it up to $1 trillion.

Then in 25 more years they pumped it to $5 trillion.

My Casey editors preached, “corroborate your information.” Look no further than the Federal Reserve. Things have radically changed.

“There is that old line from (Former Fed Chairman) Greenspan’s essay:

‘The law of supply and demand is not to be conned. …. As the supply of money increases relative to the supply of tangible assets in the economy, prices must eventually rise.'”

Our recent article, “The Jig Is Up” outlines how inflation is already at the level of the Carter years. The government and Fed are ignoring it, telling us it is “transitory”, not to believe our lying eyes.

The American Institute for Economic Research predicts: (My emphasis)

“We’ll see the next domino fall when it becomes clear that the recent spate of inflation is not temporary. People will clamor for the Fed to rein in inflation, but it will be unable to do so.

Federal borrowing is now so great that the Federal Reserve’s monetary policy has become a servant to politicians’ fiscal policy.

“…. As a trader, I am fond of saying that it doesn’t matter until it matters. For the time being, the bond market (along with the Fed) seems to be absorbing all of this supply. If it doesn’t, the Fed will simply be used as a political utility to keep rates low.

Until one or more of these things comes to pass, we’ll continue spending and printing. And who is arguing against that? Nobody in government. Nobody, except for a few Austrians on Twitter.”

“Most Americans were not adults during the Fed’s last serious inflation in the 1970’s and 80’s, and they understand none of what is being done to them or who is to blame.

What I worry about

I’m doggone concerned about what high inflation could do to our country.

“…. This is what the Fed gets wrong. The dangers of high inflation are not strictly economic – they’re cultural and political.

This country won’t survive 30% inflation. We’ll end up with an autocracy. And we’re already trending in that direction, as attitudes have shifted ever-so-slightly away from democracy and toward “strong leaders.” The shift is even more noticeable among young people. A large number of them say that democracy might not necessarily be the best political system.

So, if you’re a Fed governor, you are either ignorant of all this political and monetary history, or you just like to poke the bear, shoot for a little inflation, and try not to get too much. A little bit of inflation is fun, after all.

Close friend Len C. predicts a sh**storm. I’ve interviewed people who lived through hyperinflation. The wealth of their nation was destroyed, martial law and unbridled crime in the streets. Sh**storm understates how ugly and scary things can become. Much more than just economic.

You can’t continue printing trillions of fake dollars without the world catching on and dumping your phony currency – it’s inevitable! Politicians of all flavors will do everything they can to protect their power, including starting wars to divert the public’s attention.

I don’t like sounding like an alarmist. When will inevitable and imminent meet? I have no idea, but I sure don’t like what I see. Inevitably the little boy who cried wolf will be right. It’s not total doom and gloom, those who are prepared will fare well; particularly as compared to those who ignore the warnings.

I feel our nation could survive another episode of the Carter years. Like Jared Dillian, 30% scares me – a lot!

I urge readers to hold tangible stores of wealth like gold and other collectibles. If gold skyrockets to $15,000, much of our wealth should be protected. What kind of world would we live in?

Thanks to the readers who dropped me a line about the breathing machine recall. I have a new one on order, hopefully arriving in a week or so.

Medicare pays for one every five years and replacements are $2000+. For many, they will have to pay for it out-of-pocket. I worry about the elderly that need their machines to maintain their health and quality of life, but on very limited budgets.

If you have any family or friends who are on the recall list, I’d urge you to find out what steps they are taking to remedy the situation. It may be one of those times where families must pull together. 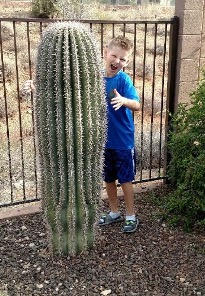 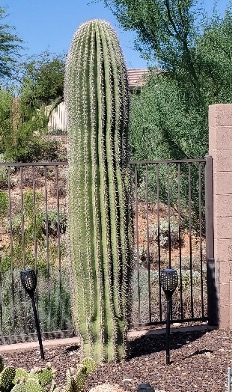 In 2017 we planted a saguaro cactus in our backyard. We believed the locals who said they grow about 1 inch per year. Using the backyard fence as a guide, four years later the cactus had grown at a faster rate than my grandson who shot up four inches last year.

The nursery charged $100/foot and encouraged us to buy a hardy one because they grow so slowly. We added a second, smaller one to the garden.

Our homeowner’s association requires a few trees in your backyard. A saguaro cactus counts as a tree. Our one remaining tree is getting expensive to maintain. Might sound crazy, but we love looking at the cactus, particularly when we light them at night.

When it rains, look for rainbows.

When it’s dark, look for stars.

Friend Alex N. sends along some Indian Hills signs for our enjoyment: 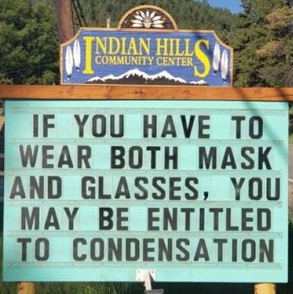 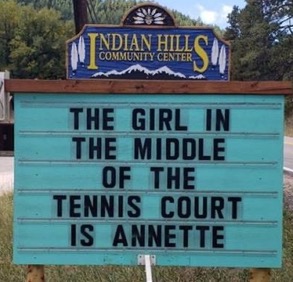 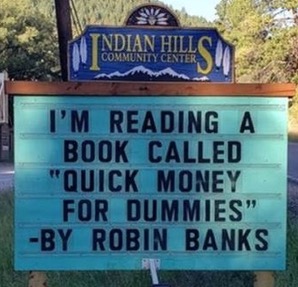 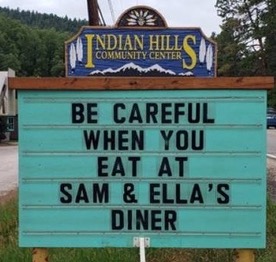 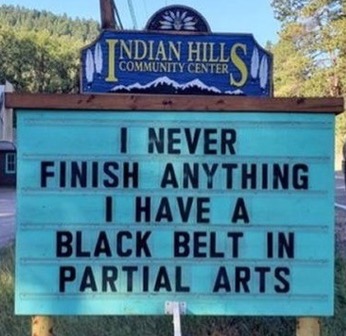