When Is Capital Preservation Not Enough? 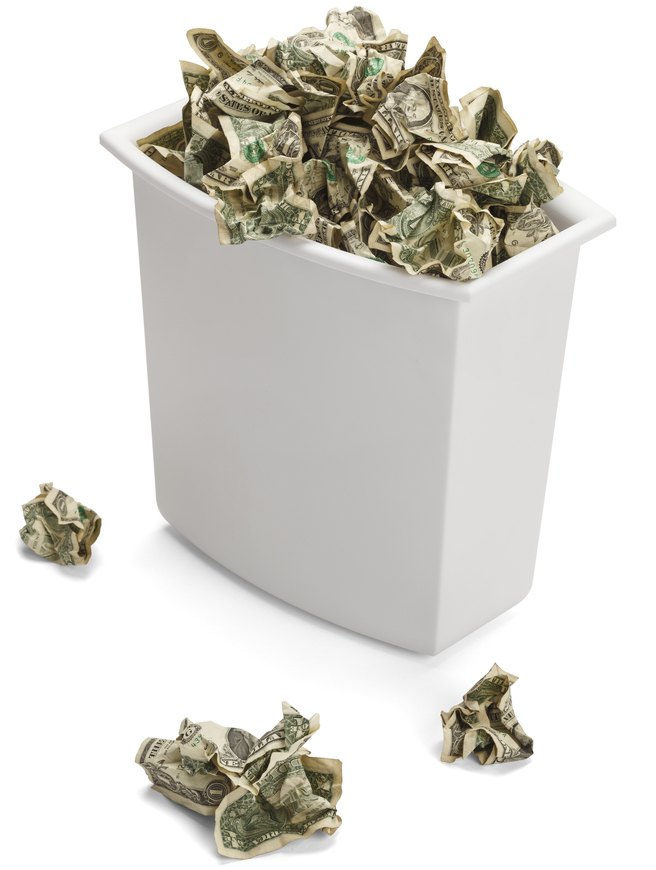 “…. When it comes to government debt, the borrower never pays; the feds have no money. The lenders – big banks, investment funds, well-heeled insiders – don’t want to pay.

Generally, they collude with the feds to make sure the real cost is put on innocent third parties – taxpayers and consumers.”

Governments pass the real cost to taxpayers and consumers by creating high inflation. Mr. Bonner lives in Argentina. At the end of February, the official annual inflation rate jumped to 51.3% per year. He estimates it is over 100%.

The next article I picked up quoted Fed Chairman Powell:

“Powell called out the need for the Fed and other central banks to find better ways to deal with pervasive low inflation, and said…it ought to pay serious attention to strategies that would drive inflation higher….” (my emphasis)

That is government lingo, meaning pass the cost of government debt to taxpayers and consumers by devaluing the dollar.

The highest inflation for baby boomers came during the Carter years. 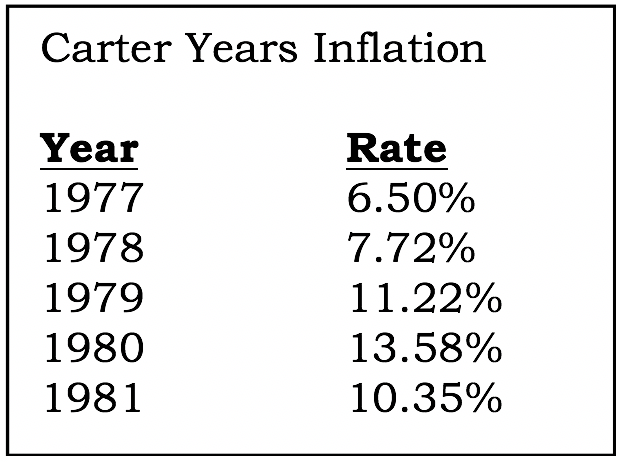 The inflation calculator tells us the accumulated inflation was 59.9%.

Investments held in US dollars lost 40% of their buying power. Baby boomers (1946-1964) were still working and could offset some of that loss through wage increases. Today they are retiring at a rate of 10,000 per day.

It’s time to go to our inflation expert, Chuck Butler, editor of the Daily Pfennig.

DENNIS: Chuck, readers really appreciate you taking your time for our benefit.

Retirees want to minimize risk with their life savings. When the government sold taxpayers on bank bailouts, low-interest rates were supposed to be temporary. A decade later a 10-year CD pays 3% and probably won’t keep up with inflation.

My parents never recovered from the Carter years. Prices skyrocketed and their income didn’t. If the fed chairman gets his wish and inflation escalates, baby boomers could face some serious problems.

How do boomers balance their need for current income, and protect themselves against inflation at the same time?

CHUCK: Thanks, Dennis. Well, I’ve been preaching this for many years. When I started preaching the Dead Sea wasn’t even sick!

An investor must have a diversified portfolio. By doing so, they reduce the overall risk to their investments. A correct diversification includes an allocation of physical Gold (Or Silver) and a combo of foreign currencies.

Harry Markowitz developed Modern Portfolio Theory. He was the first person to prove that by diversifying one’s investments with different asset classes, you reduce the overall risk of the portfolio. That includes keeping ahead of inflation, protecting the real buying power of your money. I’ve long followed Markowitz. In all of my conference presentations, I made it a point to give credit to Markowitz’s Modern Portfolio Theory.

DENNIS: Let’s start with gold. Hugo Salinas Price tracks the transition from gold back dollars to Federal Reserve Promises in his article, “The Road Ahead for the Dollar”:

During the Carter years, gold prices rose higher than inflation. 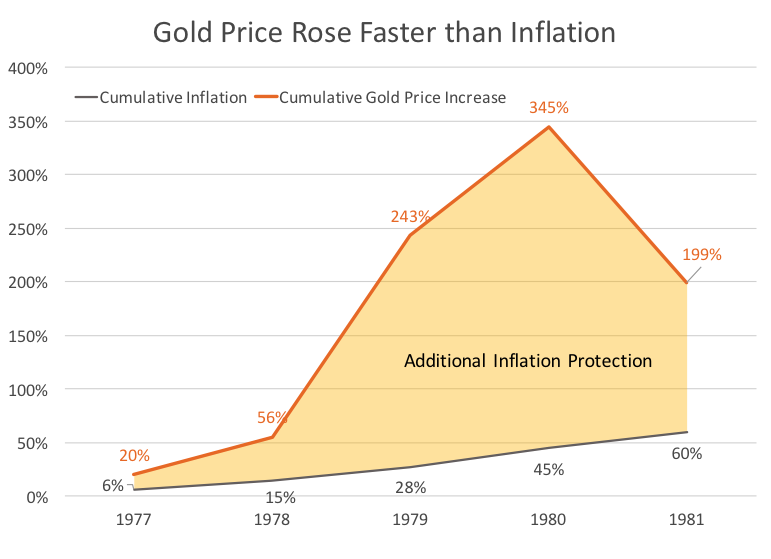 While gold has offset inflation, retirees also need income. How does an investor hedge their bets and still earn some income?

CHUCK: When interest rates around the world were normal, and not kept low to support stock markets – investing in currencies, usually garnered some additional interest – along with any currency gains that were available. Today, with the exception of Russia and Brazil, there’s very little in interest on currency deposits.

I know you hold some stocks offshore denominated in foreign currency that pays dividends, so that is another alternative. Today we are focusing on the currency itself.

When we look at currencies during the high inflation years, 1976 to 1981…we can see how foreign currencies helped offset the loss of buying power of the US dollar.

I’ll use Swiss francs and Japanese yen. In 1971, very few currencies (no euros at the time) were considered major currencies, which is why I selected francs and yen for illustration. Let’s compare their gains for that period of time VS the dollar. I converted the European price style to American price style, so it’s easier to deal with.

Owning these two currencies during the Carter years would have offset much of the loss of buying power in the dollar holdings.

DENNIS: Wow, it was more than just the Carter years! No wonder my parents struggled.

I want to use your Carter years data to show readers the effect on buying power of the “taxpayers and consumers”.

Let’s assume you had four safety deposit boxes. One contained $100,000 US dollars. The other three contained the equivalent dollar amount denominated in Swiss francs, Japanese yen, and gold. How did the buying power change over the five-year period? 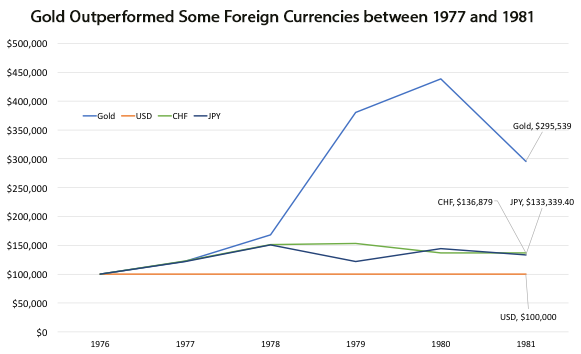 What happened to the buying power of the dollar? Assume on 1/1/76 your favorite Buick cost $20,000. Five years, that same new vehicle, (assuming they raised prices at the inflation rate) would cost $31,984.

While the yen or franc didn’t totally keep up with US dollar inflation, they sure outperformed the US dollar.

Chuck, as you tell our readers, currency is sold in pairs. If the dollar goes down in value, another will rise. There are so many to choose from today. What criteria would you use today when selecting currencies for inflation protection?

CHUCK: I tell people that the way to value a currency is to treat it like the “stock of a country”. You use a set of criteria to value a stock before buying it right? Apply your criteria to a country to see if their “stock/currency” is worthy of owning

I use the following criteria:

Using those criteria, I come up with a handful of currencies that make sense to me to own.

Another consideration is that countries that produce oil will also gain when the price of oil rises, due to inflation. I call these countries the “Petrol Currencies” and include: Russian rubles, Norwegian krone, Brazilian real, and Canadian dollars, and to a lesser extent, Mexican pesos, and U.K. sterling.

DENNIS: Thanks again for your time. One final question.

We are regularly warning readers about inflation. I feel it is not a matter of “if” but “when?”

I was frightened a few years ago when speaker Pelosi floated the idea of requiring IRAs and 401k programs to hold “safe” government debt. Much like FDR confiscated gold, the government could soon follow by deflating the value of the currency.

Inflation hedges are like fire insurance. The catastrophic damage could be terrible. The Carter years fire was bad enough.

What do you say to brokers and financial advisors who laugh and minimize those concerns?

CHUCK: Thanks again for the opportunity….

I tell them that they need to go back to school, learn real economics, and study Modern Portfolio Theory…. I learned my economics from some of the greatest economic minds of our time, and I just wish everyone would have had the opportunities like I had in that regard.

I’m a Baby boomer and I worry that many people are not adequately protected against inflation which is why I continue to write the Daily Pfennig. People need to be protected.

Dennis here. When the Fed chair is calling for inflation, that should be a warning to all. Unlike the 1970s, many baby boomers are no longer working. The catastrophic consequences of inflation are scary.

When I was asked to write a retirement newsletter, I immediately called Chuck Butler for advice. His easy to understand writing style and sense of humor sets him apart. Too many gurus use two-dollar words trying to impress readers with technical jargon. I’m proud to say Chuck has become a mentor and great friend.

Chuck has been battling cancer issues for twelve years, yet he still keeps writing the Pfennig, has a wonderful sense of humor, and always a smile on his face. Many times, I’ve confided to Chuck, “If I ever end up with cancer, I hope to handle the adversity as well as you do.” He is amazing.

A few weeks ago my doctor felt the side of my neck and said, “Dennis, I’m very concerned.” It looks like I will spend most of the summer, five days a week dealing with radiation and weekly chemo. The oncologist is very positive, proclaiming, “We’re going for a cure!” Once again mentor Chuck has been just wonderful, offering some good advice. I’m primed, in good spirits and ready to get it done.

I told my wife Jo that “It’s hard not to think about it.” She grinned and said, “Yeah, I know what you mean.” I discovered one of Chuck’s secrets. When I’m researching and writing I get very involved, blocking out almost all distractions. I just love what I am doing, working for hours to distill my research and thoughts down to a weekly blog.

I plan to continue writing each and every week. I have some contingency plans if I have to take some time off. I’m told that I’ll be pretty tired as we near the end of the treatment plan.

I’ll turn 79 in a few days. We have many friends who have been down this road in some fashion for 10-20 years. It’s common and just part of aging. I’m raring to go and get it fixed!

I have a file I review each week for closing remarks. Friend Courtenay W. sent along some “rules for aging”. I read them all and am glad I did. Here are some good ones: