When you are over the barrel, the goal is to get off the barrel 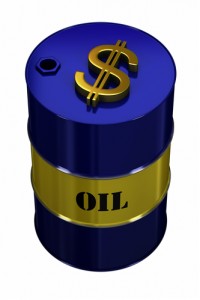 My Marine Corps drill instructor said it best, “When you are over the barrel being flogged, your goal is to get off the barrel and punish your captor so no one will ever think about doing it again.”

Do we have a problem?

Bloomberg recently quoted spokesmen from Goldman Sachs and Morgan Stanley predicting oil prices could drop to $20/bbl. or lower. Is that a problem?

Consumers enjoy gas prices around $1.70/gallon. With spring planting about to begin many farmers are happy to fill their tanks at today’s prices.

Those who work or are invested in the industry have a huge problem – which needs to be solved. How the oversupply of oil is remedied will impact most everyone. American workers and retirees alike have an economic stake in the outcome.

Take it from the top!

I first learned of the Organization of Petroleum Exporting Countries (OPEC) in October 1973 as millions of Americans had to wait in line for hours to get a meager supply of gas at very high prices. NPR sums it up this way:

“Arab oil producers cut off exports to the U.S. to protest American military support for Israel in its 1973 war with Egypt and Syria. This brought soaring gas prices and long lines at filling stations, and it contributed to a major economic downturn in the U.S.”

OPEC is a cartel; a group of nations conspiring to control supply and fix the price of oil, with Saudi Arabia leading the way. They flexed their muscles in 1973 punishing the United States for political reasons. By January 1974 oil prices increased 400%.

In the US conspiring to fix prices is a criminal offense and people go to jail. Americans were angry, feeling ripped off. Many of the OPEC nations were buying wheat. Americans screamed, “A bushel of wheat for a barrel of oil!” America did not retaliate and left the wheat pricing to the free market.

How much has OPEC ripped off the world’s consumers?

“It’s a secret…. Just how much of America’s debt does Saudi Arabia own?

….that question – (remains) unanswered since the 1970s, under an unusual blackout by the U.S. Treasury Department….

“It’s mind-boggling they haven’t undone it,” said Edwin Truman, the former Treasury assistant secretary for international affairs during the late 1990s,…. Because relations were rocky and the U.S. needed their oil, the Treasury “didn’t want to offend OPEC”….”

How bass-akwards is that; the biggest customer is afraid to offend the supplier?

When the price of any commodity is set artificially high it invites competition. Oil companies worldwide, under the artificial price umbrella of $80-$100/bbl. oil, have invested heavily to get in the game and supply increased. Today OPEC led by the Saudis, is threatened with an industry oversupply. They are retaliating – fighting back HARD.

“Saudi Arabia has vowed to continue flooding the global market…insisting that it will not cut output until Russia and other non-OPEC countries agree to share the burden.

Kirill Dmitriev, head of Russia’s sovereign wealth fund, said it is still too early for a deal with OPEC…. He said others want to “punish” US shale, or aim to block the entry of newcomers. “When all this has played out in a year, it will be much easier to sit down and reach an agreement,”…. (emphasis mine)

One does not need a decoder ring to get the message. OPEC says oil prices will not be subjected to free market pricing. We will continue to punish our competition with prices so low we force them into bankruptcy. The Russians are happy to wait it out; when the punishment has been fully administered and America is brought to it’s knees, it’s then time to talk about joining OPEC.

The cartel has no concern that predatory pricing (pricing your product with the intent of driving your competition out of business) is also illegal in the US.

Unprofitable Oil companies are going bankrupt. Lenders who financed their exploration are seeing record defaults. Service companies are fighting for their economic lives. Retirees who depend on interest and dividend checks will be severely impacted.

Here are some warnings appearing in our financial pages each day:

Is the US over the barrel?

Apparently our leaders think so. In 2007 and 2008 congress passed bills to sue OPEC for price fixing. Presidents Bush and Obama threatened to veto the bills fearing retaliatory action – we wouldn’t want to offend them.

What a surprise! Being polite and inoffensive didn’t work. Today, like bad children, we are experiencing their retaliatory punishment. What’s left to fear, they are using the whip?

The OPEC perspective. OPEC considers the problem to be one of oversupply threatening their golden goose.

They see one clear solution. OPEC nations must sacrifice short-term profits to drive competition into bankruptcy and insure that no one dares to compete with them. They intend to continue to gouge the world with higher than free market prices. In tandem, they must collaborate with Russia, Iraq and Iran to join forces controlling more of the world supply, increasing their power.

The US perspective. Our government allowed OPEC to hold us over the barrel for 40+ years. OPEC drove up the price of oil encouraging others to enter the market. Now they want to destroy those who did so.

The proposed OPEC solution is analogous to staying on the barrel pleading with our masters to use shorter, softer whips. Please, please just reduce the pain!

Adding Russia, Iran and Iraq to the cartel is their solution – not ours. Why would we give OPEC even more power over our sovereignty? Remember in 1973 OPEC cut us off for political reasons – and they will use their power whenever they feel the need.

Our nation, and our political leaders must understand OPEC is the cause of the problem. We are suffering the punishment now – the one we feared – so we might as well take our lumps and get off the damn barrel once and for all.

What should the government do?

Tackle the problem head-on; stop ignoring it. I will leave the political solutions to others, offering only two simple suggestions.

1. Our loyal Canadian friends are being hurt badly also. Why not import all we can from our North American friends and neighbors before buying from OPEC nations? If we must pay $3.00+ per gallon, wouldn’t you rather the profit go to our Canadian friends than to our enemies?

2. Until recently it was against US law to export oil. I’d love for our domestic production to be higher than our needs. Make it happen.

What should we do?

Baby boomers and retirees have a huge investment in the outcome. The result will affect jobs, our economy, future generations, and our retirement income. We must protect our nest egg regardless of what actions our government chooses.

40+ years ago our leaders allowed OPEC to put our nation at risk. Do we really need OPEC’s oil anymore? We don’t need to saddle the next generation with another 40 years of being ripped off by a cartel, many who wish to destroy our country and our values. We too must be willing to sacrifice for the long-term benefit of our nation.

I thought the “topless caravan” would be the highlight of our SSR rally last week in Las Vegas. I was wrong.

One very cool event was simply listed as “Run Rod Run”. We learned the story behind it. A few years ago there was a handicapped SSR owner who had to have his truck specially equipped for driving. His nickname was, “Hot Rod”! He dreamed of an event at a Sonic Drive in Restaurant where all the bays are full of SSR’s. It was scheduled and unfortunately he unexpectedly passed away. Several club members took off all the special equipment so his wife could drive his truck to the event. Every year the west coast group has a “Run Rod Run” at a Sonic Drive in his honor.

We filled all the bays plus the surrounding parking lots. 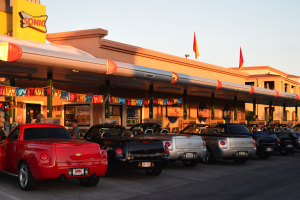 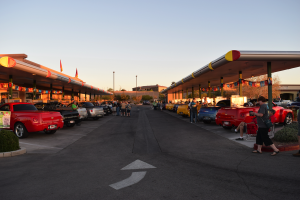 I never met Hot Rod but I tip my cap to him.

I will skip the humor this week with a parting thought. Chevrolet made a little over 24,000 SSR’s before they shut down the brand in 2006. A decade later there is a very active club with one thing in common; we love our fun trucks. The club is just good down-to-earth hard working people. Jo and I have made friends all over the country; many who will be friends for life.

Isn’t this what America is all about – working hard so you can enjoy cool things for the last quarter of the ride? Keep on rolling!