Where Are You Gonna Cut Back?

The public is up in arms, and rightfully so.

Gas prices are going through the roof with no end in sight.  I don’t ever remember spending $100 to fill the tank on my Honda minivan. 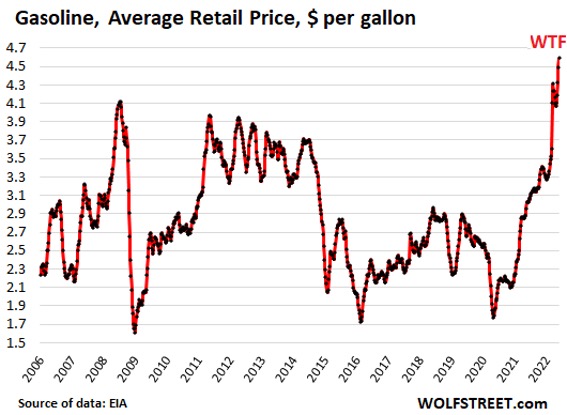 Supply is government restricted, prices are rising, affecting the cost of everything we buy, not just our personal transportation.

The explosion in the cost of living is a predictable consequence of money printing.

…. The Federal Reserve has printed more money than it has for the entire existence of the US.

From the founding of the US, it took over 227 years to print its first $6 trillion. But in just a matter of months recently, the US government printed more than $6 trillion.

…. In short, the Fed’s actions amounted to the biggest monetary explosion that has ever occurred in the US.”

Reckless spending while constricting the supply of oil is a recipe for a disaster of epic proportions.

How high can it go?

“I received an email from a dear reader yesterday….

‘Gas prices will continue to surge higher, and many Americans will be shocked by how high they eventually go. If you can believe it, in Washington State at least one gas station has now reprogrammed their gas pumps ‘to make room for double-digit pricing’….

…. A spokesperson at 76 confirmed…that the gas pumps were reprogrammed to allocate for double-digit pricing. Although not confirming that they are expecting prices to increase up to $10.00 or more, the current trend suggests the possibility.

Supplies of fuel will continue to get even tighter in the months ahead….”

…. Americans indicate that the dire state of affairs is affecting them directly. More than half say their financial situation is getting worse – 56 percent. That is the highest recorded percentage in the Harvard-Harris poll….

(Another poll)…asked, ‘As a result of the rise in gas prices, have you cut back your spending on groceries so that you can pay for gas, or not?’

Over one-third of Americans, 35 percent, said ‘yes,’ they have had to cut back on groceries.”

I contacted expert Chuck Butler for some input. If 35% of Americans are already cutting back on groceries to pay for gas, what can we expect?

DENNIS: Chuck, thank you for your time for the benefit of our readers.

You’ve predicted people are going to be forced into making some lifestyle changes because their income is not keeping up with rising prices.

The survey question asks about groceries. When times get tough, needs versus wants becomes clear.

Chuck, where do you see people cutting back?

CHUCK: Thanks again Dennis for allowing me to address your readers.

I for one will have to stop buying books to read… I went grocery shopping recently and you won’t believe the one food item that is still reasonably priced… Hot Dogs …. In past tough times, people would switch from Steak to Hamburger, or Chicken or even pork, but, even those cuts of meat have become quite expensive, so you might as well, get your taste buds prepared for Hot Dogs…

My dad was a Teamster, and it seemed like they were always on strike… We would eat, puffed rice for breakfast, saurkraut for dinner and hot dogs for lunch! Get ready to make sacrifices such as these…

I expect there’ll be less buying of expensive cell phones and children will get used to “hand-me-downs”, not the newest version. People will likely drive their cars longer; hoping the cars last longer than the payments.

Dennis, each household will struggle with their own method of cutting back…

When I was young my parents talked of “debtor’s prison.” While there is no such thing; however, many can be “debt slaves.” Paying something off does not mean you should automatically go incur more debt.

DENNIS: In pre-credit card days, we had three kids in diapers and a $20/week grocery budget. We mixed powdered milk with regular milk to fool the kids, or they wouldn’t drink it. I worked three jobs.

A young friend once proudly told me how she and her husband “sacrificed” by giving up their daily Starbucks…and making their own coffee and put it in a thermos.

Do you see any of this playing out?

CHUCK: Yes, I do, Dennis… It will start with “discretionary spending.”

Restaurants are getting back on their feet. I believe that restaurants and bars will once again see a downturn in business. If you’re going to cut back, eating at home is a good place to start.

Paying $5-$10 for a beer at a bar with a live band is expensive. Young folks will have to learn very quickly how to cut back. It’s a challenge but I have faith that they will do what needs to be done.

As I said above, as a child, we were saddled with being poor; particularly when the Teamsters were on strike. We had to make do, with everything from food, to clothing, to shoes. The younger generation will go through the same process.

DENNIS: While we focused on gas prices, food, services, and everything else is going up.

This reduced demand can cause an economic downturn, people lose jobs, a real negative spiral. Prices may come down, along with inflation, but if people don’t have jobs or money, how will they buy goods?

Is this the kind of thing that can lead to another Great Depression?

CHUCK: The economists call this Demand Destruction… If we go down this road too far, we could very well be staring at another Depression. … But, maybe someone will come up with a solution to our problems… I’m not saying that would be easy to do, I’m just saying maybe…

For those of you who do not read the daily letter of a friend of mine for many years now, Bill Bonner… I’ll let Bill explain Demand Destruction:

“‘Demand destruction’ is the term economists use. It describes the self-correcting phenomenon: how high prices cure high prices…and why inflation will take care of itself if it is left alone. As prices rise, people can’t afford to buy so much. Because they are poorer. So, prices fall simply because there is less demand for goods and services. Less is made. Less is consumed. Prices fall. And less energy is used.”

Economists believe this will be the way we combat this rising inflation. Former Fed head Janet Yellen called the effects on the working class “collateral damage”. Typical Econospeak!

DENNIS: I fear for some, cutting back here and there won’t cut it; this could be different.

I’m telling readers to keep working as long as they can, get out of debt and stay that way.

What advice are you giving readers in this regard?

CHUCK: I’ve always told my readers to get out of debt; the sooner the better … especially, when you begin to age.

Working as long as you can, is a gift that good health brings you. Find something you love and keep on trucking.

They have no idea that their money printing, and their shutting down of our Oil production in this country, have had anything to do with, the rising inflation. They will do what they must politically to mollify the citizens.

And just for the record… more stimulus checks and Casino Bank bailouts will mean more money printing, and more inflation…

DENNIS: We have both doubted the government and Fed’s commitment to tame inflation. Won’t that just drag out the inevitable?

CHUCK: Yes… as I just described, I do believe that the Gov’t will revert to printing money to “avoid the crisis de jour”. The political class will not allow the Fed to continue with rate hikes.

What I feel we’ll end up with is “Stagflation”… Where’s there’s no economic growth, and inflation at the same time… Now that’s the recipe for throwing the bums out if I ever saw one!

DENNIS: One final question. For some, there has to be a positive side. We tell readers to hold money in reserve; when the market crashes, there will be some real bargains. Those with cash, and minimal debt may find some real bargains, not just in the stock market.

CHUCK: Well, for those who are not senior citizens, look for land that’s cheap and buy as much of it as they can. Why younger people? Older people should not take on debt!

For those who dream of owning their own business, some good ones will be for sale, cheap!

While stockbrokers tout, “The stock market always comes back”, it took 25+ years during the last depression. Younger folks who have cash, and patience, will have time on their side and can do very well.

Last Friday I went to the cancer center for my normal infusion. I was excited because the kidney numbers were well in the normal range. One more test next week and we may be able to spend the summer in Indiana.

Woke up Saturday AM with a slight fever and very tired. Damn! Normally I finish up my articles over the weekend and send them in to production.

I decided to finish this up quickly, hoping things get back to normal shortly. I really want to spend the summer in IN with the grandchildren.

I’ve yet to book any flight reservations, but WOW! Like a lot of things today, the prices have skyrocketed.

“If the American people ever allow private banks to control the issue of their currency, first by inflation, then by deflation, the banks…. will deprive the people of all property until their children wake-up homeless on the continent their fathers conquered….

The issuing power should be taken from the banks and restored to the people, to whom it properly belongs.”

Subscriber Beth S. shared some cute signs at vet clinics for our enjoyment. 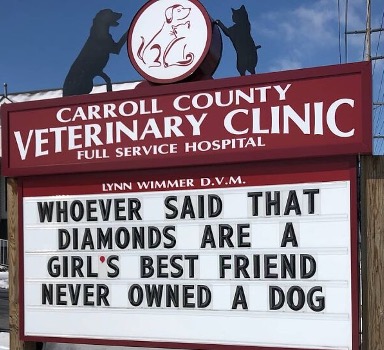 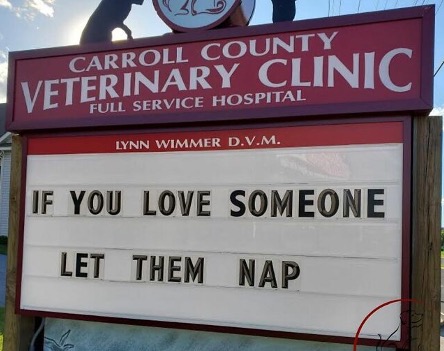 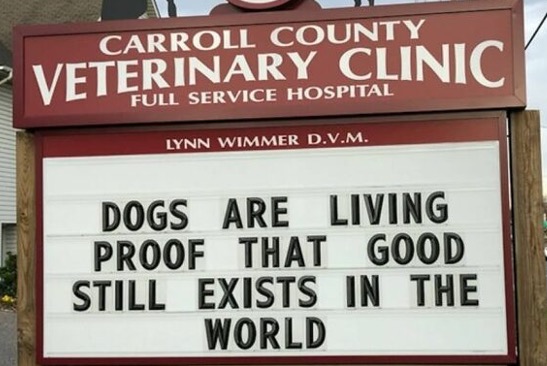