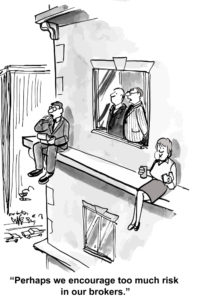 Realizing you are wrong about a basic belief is tough. The last two weeks we discussed “The Bond Fund Risks Your Broker Won’t Tell You” and “Closed-End Bond Funds, Friend or Foe?”

We concluded holding top-rated bonds is OK – individually, not in a publicly traded fund. Fund managers, chasing high returns, take risks I’m not comfortable with. If bonds are downgraded, or default, the Net Asset Value (NAV) of the fund would drop and could take years to recover.

I planned for this bond article to be positive, showing readers how easy it is to build a do-it-yourself bond portfolio. Unlike a brokerage sponsored bond fund, you would buy, hold, collect interest and when they mature – repeat the process – with minimum fees and risk. We are investors, not interest rate speculators.

My parents relied on FDIC insured Certificates of Deposit (CDs). They used to beat inflation, providing around 6% interest. Corporate bonds paid more interest to compensate for the higher risk.

“Bloomberg News delved into 50 of the biggest corporate acquisitions over the last five years, and found…. By one key measure, more than half of the acquiring companies pushed their leverage to levels typical of junk-rated peers. But those companies, which have almost $1 trillion of debt, have been allowed to maintain investment-grade ratings by Moody’s Investors Service and S&P Global Ratings.

It’s estimated that $2.5 trillion is invested in BBB grade bonds. Bloomberg warns over $1 trillion should be rated as junk bonds, but are not because of “lofty promises”. Need to look elsewhere.

I looked for safer, high-grade bonds. Here is a screenshot from my online broker: 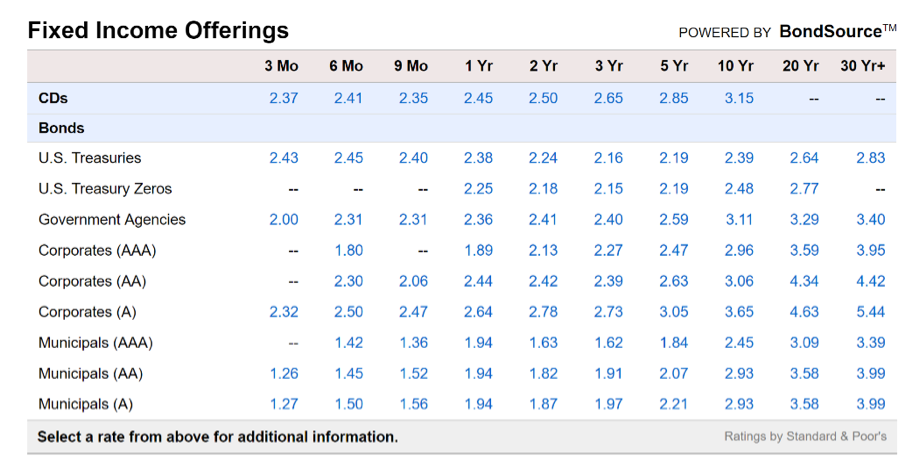 Uh-Oh! Houston, we have a problem! What happened to the “higher interest rates to compensate for higher risk?” FDIC insured CDs are paying more than corporate bonds until you get down to the A level.

How far down the ratings ladder must you go to get a reasonable interest rate differential?

I searched 5-year bonds above BBB- and Baa3, the lowest rung on the investment grade ladder. There are several available with Yield to Maturity ranging from a high of 5.272% (Ford Motor Credit) to a low of 2.034% (ANR Pipeline Co). The rates regularly fluctuate.

Some GE bonds pay 3.359%. I recently reported that GE sold bonds to pay dividends and buy back stock – and ignored their pension obligations. Now they are selling assets to raise cash. A $10,000 GE bond would pay $336 in interest, $51 more than a comparable CD. Wow, that covers 2 super-sized date nights at Wendy’s!

When a company files for bankruptcy, the government is first in line, they get their money. Bondholders are above “general creditors” and receive some of their money back. If GE went bankrupt, it is unlikely bondholders would lose all their money.

GE’s interest rate is about ½% higher than an FDIC insured CD – not a risk I’m willing to take for a couple Wendy’s burgers.

The aforementioned Bloomberg article publishes a list of well-known companies that “…. have pushed their leverage to levels that are typical of junk-rated borrowers in their sectors.” Marriott Int’l, Johnson Controls, AT&T, Verizon, Bayer, Abbott Labs, Dr. Pepper and Kraft Heinz are mentioned.

They highlight one company:

“Take Campbell Soup Co. The company borrowed more than $6 billion in the past year to buy Snyder’s-Lance Inc., the maker of pretzels and other snacks. The acquisition more than doubled the company’s debt load to nearly $10 billion.

…. A company with leverage that high would be considered junk if judged on that metric alone. For example, two Campbell Soup competitors, Pinnacle Foods Inc. and Lamb Weston Holdings Inc., have lower leverage and are rated below investment-grade. But Moody’s and S&P kept Campbell at investment-grade, saying they expected the merged food company to generate enough revenue to pay down its debt quickly.”

“Many credit rating agencies…are paid by the…issuers of the securities they rate. This creates a potential conflict of interest…the credit rating agency may be influenced to determine more favorable (i.e., higher) ratings than warranted to retain the obligors or issuers as clients”.

When you rummage through the BBB (the investment grade “Bottom of the Bond Barrel”) offerings, eliminating all the questionable companies, the interest rate differential between the remaining bonds and CDs is generally less than the ½% GE differential.

I contacted two of our “panel of experts” and asked, “Why would anyone buy corporate bonds? What am I missing?”

“Like you’ve talked about in the past, you had 6% CDs and then you didn’t…when rates dropped, they were called in.

If you had two non-callable choices between a CD and treasury, I’d take the treasury. At one time I delivered FDIC checks to depositors when a bank failed and it took forever for them to get their money.

Right now, I would stay short term because of inflation concerns. I don’t feel there is enough interest premium from corporate bonds to be worth the risk.

I don’t think you missed anything. It’s just “conventional wisdom” does not apply in the current low-interest rate world.”

I mentioned to Chuck, “Downgrades, not defaults, may cause the rush to the exits, as pension and bond funds have to unload junk bonds.” He said,

“For the great majority of investors, your reasoning is correct.

Here are some reasons why some may choose bonds.

Term: Bonds (especially Treasuries) can be purchased for most any term out to 30 years. Grandparents may want to buy an 18-year zero coupon Treasury as a gift for a newborn grandchild in a Coverdell or 529 College Savings Plan. Today’s low rates don’t offer much inflation protection, but it does guarantee there will be some money available when it becomes time to consider college.”

Notice the 5-year municipal bonds in the earlier chart pay less than 2% interest. Many municipal bonds are not subject to federal income tax, which appeals to taxpayers in the higher income brackets. 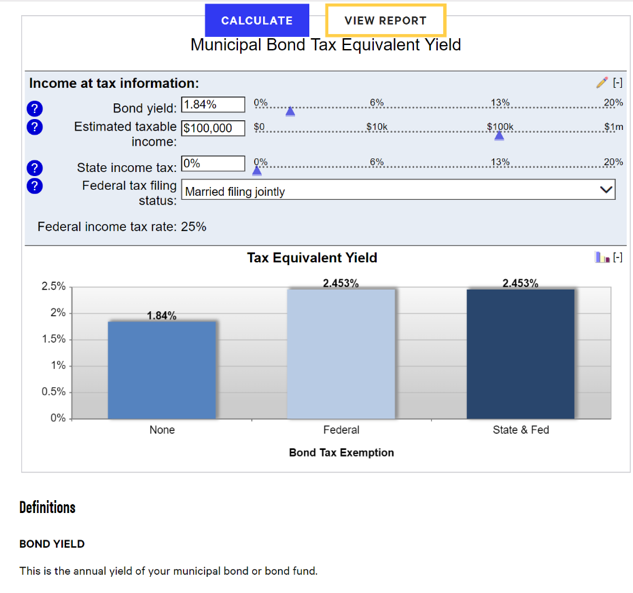 The interest is the equivalent of a 2.453% taxable bond. Investors should consult their CPA or bond specialist as there are Alternative Minimum Taxes and other legal considerations.

Municipal bonds are also rated and can default. In 2013 Reuters reports, “Detroit accounted for three of seven defaults last year on municipal bonds”.

I was surprised to see this recent CNBC report:

“Yield-hungry investors…snapped up more than $1.1 billion of general obligation bonds offered by Illinois and Chicago, two of the U.S. municipal market’s most financially troubled issuers.

Yields on the tax-free refunding bonds topped out at 3.60 percent in 2028 with a 5 percent coupon.”

Why do I suspect BOAML will package the bonds in funds where investors may be unaware of the risk? Investors should be very careful in lending money to state government entities.

I was wrong about low-risk bond yields.

I started my research to confirm the idea that individual bonds can make sense because some pay enough interest rate differential to offset the risk. I couldn’t find any. My wife Jo remarked, “That’s why you do your research!”

Why buy bonds? With limited exceptions – (shrugs shoulders) beats me!

In the meantime, we will keep our stop losses current, continue laddering short term, non-callable CDs while avoiding bonds and bond funds.

Our oldest grandson, Justin, has cerebral palsy and needs a wheelchair. He’s overcome many challenges earning a couple college degrees. He’s in his 30’s and gainfully employed.

He attended a conference in Las Vegas and wanted to visit grandma and grandpa on the way home. He flew by himself, (Delta lost his wheelchair for a day in Las Vegas), and came for a visit – and insisted on paying his own expenses. That’s sure a declaration of independence!

I believe the parent’s job is to raise their offspring where they can survive on their own on this planet. Justin and his parents have worked hard to achieve that goal. We are very proud of Justin and his entire family!

Hockey playoffs are starting. We lived in Tampa and are fans of the Tampa Bay Lightning. They had the best regular season record in the NHL. They are a small market team and we are hoping they do well in the playoffs.

Sophocles was a Greek writer, born in 496 BC and lived to be 90. I found a couple of his remarks pertinent to my learning experience writing this week’s article. Some things never change over time.