Why would anyone want to run for president? 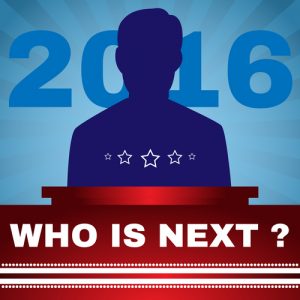 As I type, the news media is breathlessly awaiting the result of the Iowa caucus. It begins the ritual of citizens believing they are electing the most powerful person on the planet.

Each candidate does the same dance. Like Paul Revere they shout that danger lurks ahead. Like Mighty Mouse, just in the nick of time, they are the best choice to fly in and save the day. Same old story!

Election cycles do not coincide with economic cycles. In good and bad economic times, the incumbent party is considered responsible. When the public is angry, they fire the people in charge. The next president has a good chance of being run out of town after their first term.

While the president and congress are deemed responsible for the economic health of the nation, in my opinion, the Federal Reserve pulls the strings.

This is nothing new. In his book “Volcker, the Triumph of Persistence”, author William Silber says:

“His policy of preemptive restraint during the economic upturn after 1983 increased real interest rates and pushed Congress and the president to adopt a plan [the 1985 Gramm-Rudman-Hollings bill] to balance the budget….” (Emphasis mine)

Bernard Shull outlines the public reaction in his book

, “The Fourth Branch: The Federal Reserve’s Unlikely Rise to Power and Influence”.

“Volcker’s Federal Reserve board elicited the strongest political attacks and most widespread protests in the history of the Federal Reserve (unlike any protests experienced since 1922), due to the effects of the high interest rates on the construction and farming sectors….”

I remember farmers from across the country driving their tractors to Washington and protesting in front of the Federal Reserve building.

While Volcker may have caused Congress to pass a law to balance the budget, it’s been virtually ignored. Government deficits have grown to record levels. TreasuryDirect reports the national debt at September 30, 1980 was $907.7 billion. On 12/31/2015 the amount has grown 20 times higher to $18.9 trillion. 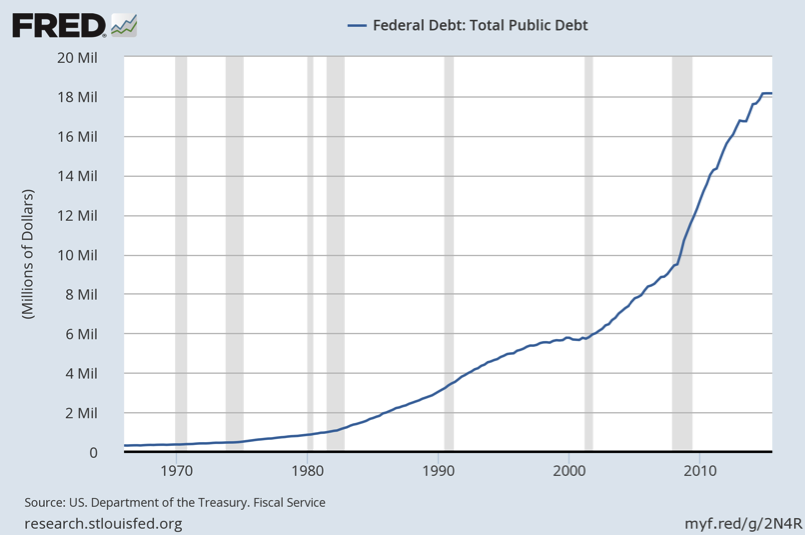 In an October 2015 interview, former Fed Chairman, Ben Bernanke said, “Monetary policy (interest rates controlled by the Fed) can no longer be the only game in town. Fiscal policy makers in Congress need to step up….” (Emphasis mine)

Might that be a warning for congress to fix things or the Fed may pull a Volcker and force the issue?

The power of the Fed

In the fall of 2008, the Federal Reserve began their policy of quantitative easing, dropping interest rates radically. TreasuryDirect reports the average interest rate on government debt on 12/31/2007 was 4.8%. By 12/31/2015 it dropped to 2.3%, a drop of 2.5 percentage points. As Treasury debt matured, it was rolled over at lower interest rates. To keep interest rates low, the Fed also bought approximately $4 trillion in government debt.

I’m unable to calculate the exact amount the government saved in interest. A 2.50% interest rate reduction when rolling over the $10.6 trillion owed at the end of 2008 saves approximately $266 billion annually. Without that saving our debt would be over $20 trillion today.

What the Fed giveth, they can take away

Can the Fed unwind the $4 trillion they hold in treasuries? Today a 1% increase in interest rates adds $190 billion to the government expense budget. Does congress raise the debt ceiling again or cut expenses elsewhere?

In the Yahoo Finance article, “Dow will reach 25,000 because QE4 is coming”, Yves Lamoureux, president of macroeconomic research firm Lamoureux & Co. tells us:

In addition, new rules in recent years have made it more costly for banks and broker-dealers to hold the large supply of bonds they historically carried. This has caused them to shrink inventories substantially. Without a large marginal purchaser, demand for U.S. bonds dries up and yields go higher, which makes it more expensive for the U.S. government to issue debt.”

Although the Fed is supposed to be politically neutral, Lamoureux believes it will step into the market again to pick up the slack. He says, “The Fed will have to expand its balance sheet to get us to grow again – especially this year, an election year…” (Emphasis mine)

Zerohedge chimes in, “And you thought QE was over: The Fed Will Monetize Half Of this Year’s U.S. Treasury Issuance.” They look at the debt currently held by the Fed that is maturing during the next four years:

“…(The Fed) will remain indefinitely active in the open market. And while there were no sizable maturities from the Fed’s various QEs to date (only $474 million in 2014 and $3.5 billion in 2015) that will change dramatically this year, when Brian Sack’s team will have to purchase about $216 billion to replace matured TSYs. According to JPM (J.P. Morgan) calculations, this represents half the net new government debt that will be issued over the next 12 months.

In a bond auction the government offers treasuries at a certain interest rate. They keep raising rates until all their debt is sold off. During the QE years, had the Fed not intervened and bought $4 trillion in debt, the government would have been forced to pay higher rates adding to the deficit.

The Federal Reserve’s action will be a major factor in the success or failure of the new president. Here are some available options:

1. If the Fed decides not to roll the current $4 trillion holdings, and not buy more treasuries, it will put tremendous pressure on Congress and the president – much like Volcker did. If interest rates rise 2% Congress will have an additional $380 billion annual expense they have to pay for. Does the Fed have the courage to force the issue, knowing it will be painful? Did Bernanke really issue a warning?

2. The Fed can roll over the $4 trillion they currently hold and not buy any more treasuries. Interest rates will rise because more debt will have to be sold in the open market – but not quite as quickly as option 1. The dance will continue and things will not improve.

3. The Fed can choose to resume with additional QE bailouts – buying even more debt to keep interest rates down. Deficits will appear artificially low as they kick the can down the road.

The bailout began in 2008 and did not and will not work. It will take a lot more than a few tractors in Washington to force congress to “step up” and get spending and deficits under control. Since December 31, 2008 government debt increased from $10.6 trillion to $18.9 trillion. It will continue to rapidly escalate. A new president, (with almost half of congress working against him/her), cannot make it go away in four years. How long before things collapse under the weight of unsustainable debt? Let’s hope it does not come down to citizens storming the palace.

As Mr. Lamoureux said, the Fed is supposed to be politically neutral, however if “the Fed picks up the slack” as he predicts – because it is an election year – a perfect political trap is being set.

Beginning in 2017, the Fed will have $896 billion in maturing treasuries. The Fed will decide if government interest costs rise moderately or substantially. “Blame it on Obama” is not going to mollify the citizens.

I’m saddened as I look at the candidates, is this the best America has to offer? No matter who is elected, the Federal Reserve controls their destiny. The most powerful person is not always the king, but rather the kingmaker, or breaker. The power of Janet Yellen, operating behind the curtain, should not be underestimated. Whoever wins better be nice to her – after all Janet Yellen, an unelected, academic bureaucrat, is the most powerful woman in the world! Now that’s a scary thought!

Jo and I are headed to Las Vegas for Super Bowl Weekend. We’ve discussed finding the pawn shop that is featured on the TV show “Pawn Stars”. My guess is the place has turned into a tourist attraction and will be mobbed.

Who are you pulling for in the Super Bowl? I’m hoping for an exciting game and the outcome is not known until the final play of the game. Watching the crowd, with many having bets on the game, may be as much fun as the game itself.

I want to share some exciting news. As you all know, (see below) I intend to keep this site free; covering my costs through other means. I just received an email from Amazon. They are sending me a small commission check for items readers ordered through our Amazon link

. It’s the first dollar of income we have received. We are a long way from covering our cost, but it is an exciting start.

I want to thank all of you. Our readership is steadily growing. Please continue to forward our columns to your friends and use our Amazon link. I am still humbled by the idea that people enjoy reading what I have to say – Thank you again!

Sometimes I get wound a little tight on the problems of the day; investments, politics, family, working – you name it. Good friend Phil C. provides some quotes about life. I grabbed a couple – what a wonderful way to put things in perspective: