What Will Happen To Dividend Stocks When The Fed Continues To Raise Rates? 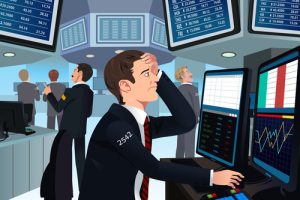 What’s going to happen to dividend stocks when the Fed continues to raise rates?

In early 2016 San Francisco Fed President John Williams predicted, “I think something in that three-to-five-rate-hike range makes sense, at least at this time.” It didn’t happen; they waited until December 2016 to raise rates a quarter point.

Janet Yellen and her Federal Reserve Gang now appear to be hell-bent on raising interest rates 3 times in 2017. If they do, what will that mean to Baby Boomers, retirees and pension funds that have trillions of dollars invested in dividend paying stocks?

The stock market has almost tripled since the 2009 bottom. When looking at the charts, one would think we are in the roaring 20’s; happy days are here again.

Sadly, that is not the case. In January 2008 the labor participation rate was 66.4%. It currently sits around 63%. Wages became stagnant. Pension funds, baby boomers and retirees are struggling to stay afloat. The US national debt doubled during that time period.

In early 2008 interest rates were high and the S&P 500 was around 1500. A real estate crisis was coupled with massive bond defaults. Lehman Brothers collapsed, the government dropped interest rates to unprecedented levels bailing out the banking system, while the S&P dropped in half. Interest rates dropped to historic lows. Solid, safe fixed income investments disappeared.

Investors, pension funds, annuities and retirees were left scrambling, frantically searching for yield. With few options left, trillions poured into the stock market in search of yield and appreciation.

The current stock market high is not a result of solid business fundamentals and a booming economy. It’s high because investors were forced to take on additional risk, including investing in the stock market, to earn some return on their money.

What is going to happen now?

The Federal Reserve raised rates in March and signals there is more to come. The stock market continues to rise; ignoring the rate increases on the horizon.

A stock market correction is defined as a decline of 10% from the most recent highs. We have not seen one since 2011. When will the inevitable correction come?

“Jeffrey Gundlach, chief executive officer at DoubleLine Capital, said … he expects the Federal Reserve to begin a campaign … of “old school” sequential interest rate hikes until “something breaks,” such as a U.S. recession.”

The most recent crisis began with massive bond defaults because of toxic real estate loans. We have now experienced 8 years of unprecedented (lowest in 5,000 years) low interest rates.

MarketWatch warns, “Bill Gross says another credit crisis could be just around the corner.”

“…Another Lehman-type situation could soon befall the global economy if it doesn’t rein in what Gross considers rampant credit creation.

The U.S. economy has created more credit relative to gross domestic product than existed during the run-up to the financial crisis.

…Despite their best efforts, the U.S.’s highly leveraged financial system is like a truckload of nitro glycerin on a bumpy road. One mistake can set off another credit implosion, leaving the Fed in an undesirable situation.

…When the 2008 crisis broke out, central banks were able to slash interest rates and unfurl a massive bond-buying program to help breath life back into credit markets.

This MSCI study, “How High-Dividend Stocks Fared When The Fed Tightened” tells us:

“With rates at historic lows, many investors have used high-dividend stocks, rather than low-yielding bonds, in pursuit of income. … Conventional wisdom says that those investors should return to bonds when interest rates go up. (Emphasis mine) While that might be true if interest rates were at or above historical norms, our research finds that markets can work differently in a low-rate environment.

In our recent research paper …we examined yield factor returns for the 88-year period ended July 2015. We found that, when rates were low to begin with, high-dividend stocks outperformed the market by an annualized 2.4 percentage points when rates started to go up.

On the other hand, when low rates fell under such conditions, the high-dividend stocks in our study actually lagged the market by an annualized 2.6 percentage points.”

Trillions of dollars poured into the stock market because safe fixed income investments were no longer available. Investors felt like they were forced to put money at risk in the stock market.

I interviewed dividend stock expert Tim Plaehn. Tim focuses exclusively on dividend payers, and how to properly utilize them for generating passive income. He publishes several research services for Investors Alley. He weighs in on this subject:

“Most of our readers are either retired or close to it. … Were it not for the 2008 bank bailouts a good many of them would have little, if any money invested in the stock market, they would be comfortable invested in decent yielding CDs.”

When interest rates rise (for safe fixed income investments) to inflation beating yields of the past, money will quickly flow out of stocks back in that direction. Pension funds, annuities and individual investors are very likely to make the “flight to safety” and hold a larger portion of their investments in safe bonds.

Mix a major credit collapse in the junk bond market; a stock market correction and interest rate increases all together and the “flight to safety” could be supersonic!

While the study indicates “Conventional Wisdom” might be wrong, it does not conclude that millions of investors will ignore “Conventional Wisdom” and continue to hold their stocks while they are falling. What if investors rush for the exits? If that happens and retirees try to ride it out, it could be a disaster. While the study suggests, “not to worry”, it’s better to err on the side of caution.

What about those holding dividend paying stocks or funds?

Each investor’s situation is different and I recommend you counsel with your licensed financial advisor. The “Conventional Wisdom” regarding holding solid, dividend-paying stocks should be reviewed.

I asked Tim Plaehn about a major correction.

“Your question is one I am frequently asked. Our retirement-aged readers can’t afford to get wiped out and rebuild.

The Warren Buffett theory is not to worry, the market always comes back. Of course he is worth upwards of $70 billion. Losing a few billion in a correction doesn’t affect his life. For most of us things are quite different in our real world.”

In 2009 we had friends who saw their 401(k) drop 40%. Unlike Warren Buffett, the correction had a major affect on the rest of their life.

Remember the old rule, “Live off the interest, and never touch the principal?” It’s a kissing cousin to – “buy solid dividend payers, hold them and collect ever increasing dividends – forever.” No worries!

The theory is that holding safe, solid companies reliably paying and increasing dividends is providing you the income you need. Pay little attention to the stock price because the market always comes back. What about the 25 years it took to recover during the Great Depression?

The theory works well if you meet the following criteria:

Many can no longer live off their retirement income; they’re dipping into their principal to make up the income shortfall. If there is a major correction, they are compounding the problem by having to sell more shares, thus reducing their dividend income even further.

It’s a great illustration about why I am a believer in using stop losses. Some stocks may do well and never drop to your stop loss number. Others may not do so well. Protect yourself by riding your winners and dumping your losers before they can do catastrophic damage. It only takes one or two losers to do severe damage to a portfolio, why risk it?

Those who live in Tornado Alley are familiar with this on their radio. “…beep…beep…beep! This is a tornado watch (followed by details). Take proper precautions until the storm has passed. …beep…beep…beep!”

While no tornado has been sighted, the investment horizon is filled with clouds. Take heed!

Regular readers have probably noticed I am producing more FREE reports. Many subjects are detailed and much too long for a single article. For more detailed information, please download our new FREE report, 10 Things You Need To Know, That Brokers Won’t Tell You About Dividend Paying Stocks.

Congratulations to the USA baseball team on winning the World Baseball Classic. Unlike most spring training games, the players take these games seriously. The team from Puerto Rico was excellent, and I thought they would win. You could see how terribly disappointed they were in losing the final game.

It’s beautiful here in southern Arizona. Locals tell us we are experiencing something that occurs every dozen years or so. Remember all the rains that flooded California? 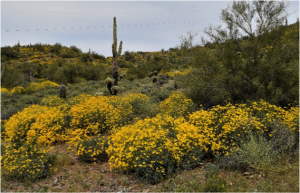 When they get to Arizona, they light up the desert wildflowers.

We have lived on Daisy Mountain for almost two years and I’ve joked we have yet to see a daisy.

Not anymore, the mountains are covered. It reminds me of Texas when the wildflowers bloom. The desert is alive with color. We have company coming until mid April and we hope they continue to bloom.

We had the young grandchildren this week so I’ve selected some “Great Truths That Children Have Learned”, provided by good friend Jeff W.