Will The Next Bank Bailout Bankrupt America? 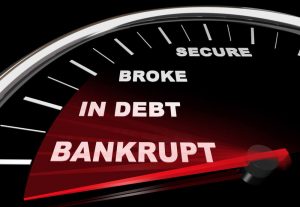 Can bank bailouts bankrupt America? Why would congress let it happen?

In a recent Daily Pfennig, friend Chuck Butler tells about educating his grandsons about the worst president there has ever been:

“…. I couldn’t let that one slip … I explained to them that Woodrow Wilson was the all-time worst president, … culminating with, he ushered in the Federal Reserve….”

“The financial system … has been turned over to the Federal Reserve Board. That board administers the finance system by authority of … a purely profiteering group.”

“Due to the financial chaos triggered by the stock market crash of October 1929, more than 9,000 banks had failed by March of 1933, signaling the worst economic depression in modern history.

…. The FDIC’s purpose was to provide stability to the economy and the failing banking system.

…. The FDIC was declared a success when only nine additional banks closed in 1934.

…. The period from 1933-1983 was characterized by increased lending without a proportionate increase in loan losses….

…. In the ’60s, banking operations started to change. Banks began taking nontraditional risks and expanding the branch networks into new territory with the relaxation of branching laws. …. This trend would finally catch up to the banking industry….

…. The 1980s saw the beginning of bank deregulation.

…. These laws authorized the elimination of interest rate ceilings, relaxing restrictions on lending and overruling the usury laws of some states.

…. Congress passed the Garn-St. Germain Depository Institutions Act, which furthered bank deregulation and the methods for dealing with bank failures. All these events led to a 50% increase in loan charge-offs and the failure of 42 banks in 1982.

An additional 27 commercial banks failed during the first half of 1983, and approximately 200 had failed by 1988. For the first time in the post-war era, the FDIC was required to pay claims to depositors of failed banks, which highlighted the importance of the FDIC and deposit insurance.”

For the last several months I’ve bookmarked several articles from an excellent publication, Wall Street On Parade. (WSOP) They look behind the scenes.

WSOP’s article, Why Is Wall Street the Only Industry in America With Access to the Fed’s Endless Money Machine?, explains the bailout history:

Much of the blame for the 2008 bank bailout was repealing the Glass-Steagall Act, which allowed banks to merge with investment firms, now commonly called “casino banks”.

As part of the 2008 bailout, congress passed the Dodd-Frank financial reform bill which was supposed to make these megabanks safer so a bailout would never happen again. The highest risk gambles, derivatives, were supposed to be eliminated from federal protection.

In 2014, Pam Martens tells us Citigroup lobbied for deregulation, including derivatives.

“Citigroup snuck its deregulation legislation into the $1.1 trillion Cromnibus spending bill…. Citigroup was able to pass this outrageous deregulation legislation because the majority of Congress and the President “lacked the political will” and the “fortitude to critically challenge the institutions and the entire system they were entrusted to oversee. (Emphasis mine)

…. With the willing participation of Congress and the President (the country is) set up for the next financial collapse….

Much has been in the news recently about the Fed intervening in the repo market. WSOP tells us “The Fed Has Created the Big Lie for Congress on its Repo Loans while the New York Fed Blocks Freedom of Information Requests”:

“There is nothing in … the Federal Reserve Act, that allows it to be the lender-of-last-resort to the trading houses on Wall Street. The Fed’s Discount Window, which is legally allowed to make emergency or seasonal loans, is restricted by law to just deposit-taking banks – not Wall Street trading houses.

And yet, bailing out Wall Street is exactly what the Fed has been doing … and what it did secretly to the tune of $29 trillion during the financial crisis from December 2007 to the middle of 2010.

…. The Fed’s current money spigot … impacts the economy because it is ballooning the size of the Fed’s balance sheet (now back above $4 trillion) which the U.S. taxpayer is ultimately on the hook for. (Emphasis mine)

It impacts the U.S. economy because it is worsening the existing bubble that already exists in the stock market, thus making the inevitable bursting of the bubble worse.

…. Right on cue, the New York Fed, the regional Fed bank that directly controls this money spigot to Wall Street and was the stonewaller-in-chief during the financial crisis, is back to its old games again of denying, thwarting or stonewalling requests for information on these repo loans from the public and the media.”

The FDIC has been hijacked

The FDIC was created to protect depositors from losing money when bankers make bad decisions. When a bank failed, the FDIC stepped in and paid the depositors and disposed of the banking assets selling the bank or part of their assets to other banks.

As banks became deregulated, the big banks bought up or merged with the smaller banks to create HUGE banking organizations. The number of US commercial banks has declined dramatically. In 1984 there were over 14,000 commercial banks, now there are less than 5,000.

WalletHub provides an interesting graphic showing this huge concentration in a small number of banks: 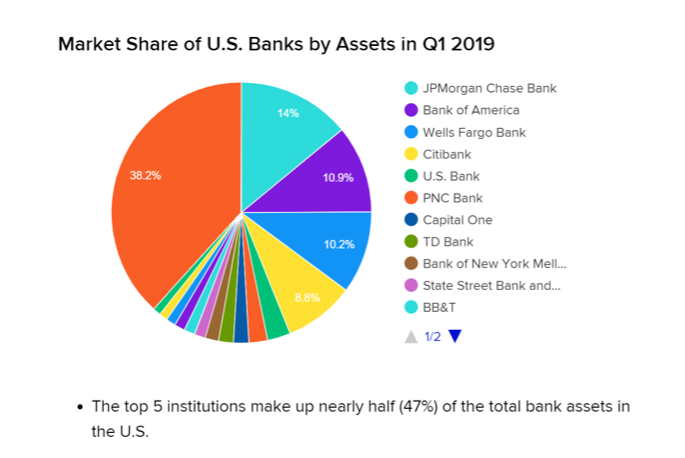 For over 50 years the banking system, coupled with FDIC insurance worked pretty well. As the banks deregulated, merged with brokerage houses and made risky investments – their profits soared – until their risky house of cards collapsed.

The majority of the public was opposed to the 2008 bank bailout. The Fed claimed the banks were “too big to fail”. The Fed, owned by these failing institutions, convinced Congress to bail them out by lowering interest rates while destroying every pension plan and 401k in the country. The bailout came at the expense of the US taxpayer and citizens. Interest rates have never been allowed to return to a free-market level.

The Dodd-Frank bill was supposed to ensure this could never happen again. Yeah right! The banks quietly got their derivative risk back under the insurance umbrella, backstopped by US taxpayers.

Are the banks now safe?

“The most recent 10Ks (annual reports) filed by the largest Wall Street banks covering their financial condition as of December 31, 2018, provide the strongest argument thus far for Congress to enact legislation to separate the Federally insured, deposit-taking commercial banks from the trading casinos on Wall Street.

In other words, Congress needs to restore the Glass-Steagall Act, which kept the U.S. financial system safe for 66 years until its repeal in 1999.” (Emphasis mine)

WSOP provides information on the huge derivative bets placed by Wall Street. If the banks lose, they expect them to be bailed out once again.

“Among the biggest banks on Wall Street, JPMorgan Chase has the largest exposure to derivatives, with $45.2 trillion exposure, according to the National Information Center graphic. Yes, we said “trillion.”

“That so little has actually changed since the 2008 financial crash – the most devastating U.S. economic collapse since the Great Depression – should be a priority issue for every engaged American and every candidate running for President in 2020.”

What “should be a priority” isn’t happening. Congress has demonstrated they “lacked the political will” and the “fortitude to critically challenge the institutions … they were entrusted to oversee.” Instead, our 2020 political landscape is polluted with political hysteria as opposed to solving real problems.

Friend and expert Chuck Butler told us the Fed was raising rates for a year or so, needing “wiggle room” for the next downturn and possible bailout. Many pundits predict we will see zero to negative rates as the Fed protects its own at the expense of seniors, savers, and taxpayers.

No one knows what, or exactly when this downturn will happen, but it won’t be pretty. Keep and increase your gold holdings. True reform would take us back to the gold standard, while our US dollar holdings would become nearly worthless.

I’m probably not the only one who is fed up with the political crap we are being bombarded with on television. Lately, as voices are raised, I change the channel, generally to the Weather Channel. Unfortunately, they too have become a bit politicized. 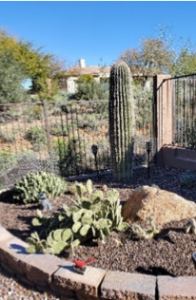 While much of the country is in the braces of cold winter weather, our AZ desert weather is at its finest. We have had mild nights and the daytime highs are hitting the 70’s with plenty of sunshine. From now until mid-May we delight in having the windows and doors open enjoying nice spring breezes.

A couple years ago we bought several cactuses in tiny pots at Home Depot. We planted them in planter boxes to let them take root, then replanted them throughout the yard. Now, some of them are huge. We’re concerned, we may have to start cutting them back. Most of our backyard fence is adorned with different types of cactus and it is pretty neat.

Football season is almost over. Congratulations to LSU on winning the collegiate championship – and the Super Bowl is right around the corner. While I will probably watch the game, my interest level is not high.

I realize there can only be one champion; however, I was hoping Northwestern and the Bears could have had better seasons.

Hate to admit it, but in the past, the cry was always “wait until next year!”. I’ll be 80 in a few short months and realize next season is promised to no one. Enjoy the game, relish the moment and keep smiling.

And my all-time favorite…